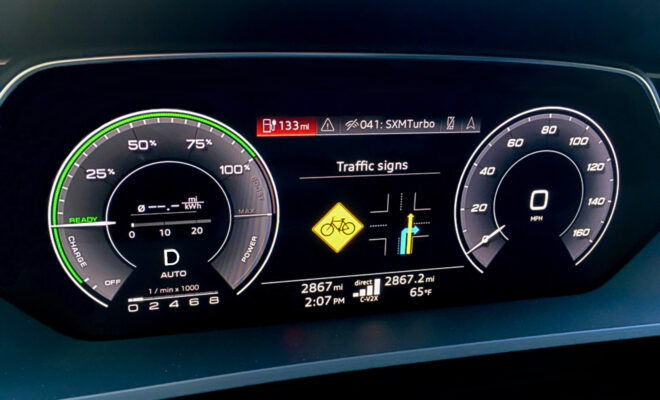 Audi of America today announced that it is working with Spoke, a mobility platform for safety, connectivity, and rich rider experiences; Qualcomm Technologies, Inc.; and Commsignia to bring the benefits of cellular vehicle-to-everything (C-V2X) technology to vulnerable road users (VRUs) and enhance safety on roadways. Using C-V2X technology, the companies are working together by conducting C-V2X demonstrations with particular bicycle to vehicle use cases to explore solutions to make Audi vehicles aware of bicyclists and other VRUs, as well as create safety alerts that can help prevent incidents among all road users.

The C-V2X demonstrations will aim to validate Spoke’s first-of-its-kind hardware and software suite, which is designed to be the industry’s first reliable, robust connected system to offer secure, direct communication for contextual awareness and alerts between drivers and bike riders. Audi is also continuing to refine its C-V2X technologies for production-intent applications, allowing for a truly connected ecosystem between drivers and the world around them.

This comes at a particularly crucial time, as Congress passed the Infrastructure Investment and Jobs Act in November 2021. In addition to providing various significant funding opportunities for deployments incorporating connected vehicle technologies, the legislation also allocates funds for a two-year research study led by the National Highway Traffic Safety Administration (NHTSA)  and the Federal Highway Administration to “expand vehicle-to-pedestrian research efforts focused on incorporating bicyclists and other vulnerable road users into the safe deployment of connected vehicle systems.”

NHTSA reported in its most recent data 846 bicycle fatalities from motor-vehicle-related accidents in 2019. That represents a 36% increase since 2010. Year-over-year, NHTSA reported on-road cycling injuries increased 4.3% to 49,000 in the U.S. in 2019. In addition, the National Roadway Safety Strategy released by the Department of Tranportation (DOT) in January 2022 notes “fatalities among pedestrians and bicyclists have been increasing faster than roadway fatalities overall in the past decade”.

Audi is developing hardware and software in its all-electric Audi e-tron Sportback test vehicle to use both direct vehicle-to-bicycle communication using short range signals that do not rely on a cellular network and LTE signals that use cellular towers to identify bicycles on the road. Vehicles will be able to read their surroundings to identify when bicycles are nearby, interfacing with Spoke Safety’s connected suite, and even identify bicycles that may be obstructed from a driver’s view.

Since 2020, Audi has been working with partners to develop C-V2X technologies in the U.S. to help protect VRUs. In Northern Virginia, organizations including the Virginia Tech Transportation Institute and Virginia Department of Transportation teamed up with Audi and Qualcomm Technologies on a C-V2X based program to inform vehicles approaching a construction zone, alert drivers of work-zone speed limit when entering construction zones, and alert roadside workers when vehicles were close to construction zones via a connected safety vest.

In Alpharetta, Georgia, Audi collaborated with Applied Information and the Fulton Co. School System, Qualcomm Technologies and others, to connect cars with school buses to identify when children were boarding or exiting buses as well as show vehicle drivers when they were entering active school zones.

The ability to realize the potential safety benefits of C-V2X technology only recently became possible following a U.S. Federal Communications Commission (FCC) ruling reached in November 2020 and published in May 2021. In its decision, the FCC agreed to allocate a portion of the ITS 5.9 GHz cellular band for C-V2X applications for the first time. The decision allowed C-V2X for the exchange of standardized communications between vehicles and between vehicles and infrastructure.

Through internal research, as well as publicly available data, Audi estimates there will be 5.3 million vehicles, work zones, railway crossings, bicycles, and other devices that will be able to connect using C-V2X by 2023. By 2028, it is possible that number will increase to 61 million connected devices, including as many as 20,000 crosswalks, 60,000 school zones, 216,000 school buses, and 45 million smartphones.

The first public demonstrations of the Spoke connected bicycle technology with the Audi e-tron Sportback will be March 21-23 at the PeopleForBikes Bicycle Leadership Conference in Dana Point, California, followed by the Sea Otter Classic in Monterey, California, April 7-10.