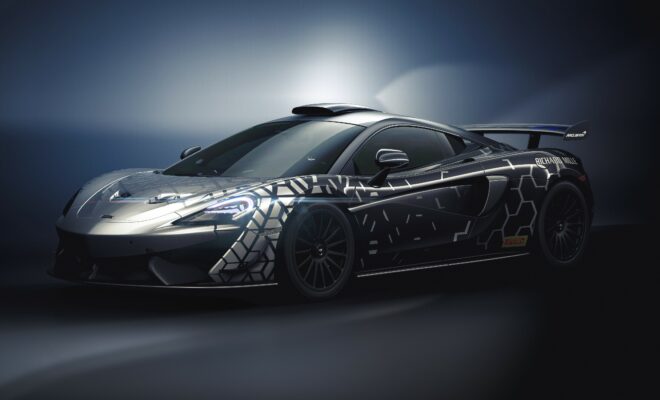 McLaren announced the 620R, the first car in its class to offer true motorsport credentials in a fully road-legal package. The limited-edition coupé – just 350 will be built – evolves the competition specification of the McLaren 570S GT4 to deliver a race-car experience on either track or road.

“The McLaren 570S GT4 is a first-class GT race car that having won races in every championship it has competed in since its first appearance in 2017 is attracting an increasing number of customer racing teams. Now, in response to repeated customer requests, we have homologated that class-leading package for the road in the new McLaren 620R, a limited-edition, 620PS superlight coupé that is the perfect choice for an enthusiast wanting an authentic motorsport driving sensation – and performance to match – on both track and road.”
Mike Flewitt, Chief Executive Officer, McLaren Automotive.

The 620R has the same M838TE 3.8-litre twin-turbocharged V8 engine used in the GT4 car, but with a significant difference in power output; freedom from racing regulations has allowed the engine ECU and turbocharger management to be reconfigured to achieve 610bhp, making this the most powerful Sports Series car yet. The engine also develops torque of 457lb ft and even with lap times more important than sheer top speed, the combined outputs helps to deliver benchmark performance figures of 0-60mph in 2.8 seconds and 0-124mph in 8.1 seconds. Maximum speed is 200mph.

Stopping power comes from McLaren’s latest lightweight braking system, which in the track-focused set-up on the new 620R comprises carbon ceramic discs (390mm front, 380mm rear) and forged aluminum brake calipers all round, with improved pedal response, modularity and resistance to fade even after repeated hard-driven circuit laps. The braking performance is unsurprisingly also extremely impressive on the road, where the 620R runs as standard with Pirelli P Zero Trofeo R semi-slick tires, but drivers who swap to the optional, full-slick motorsport tires when they arrive on circuit will experience a whole new level of braking.

High levels of mechanical grip are an essential part of the 620R’s track parentage, but it is the car’s aerodynamic performance that elevates it to the status of a road-legal GT4 racer. The adjustable carbon fibre rear wing is the same component fitted to the 570S GT4. Raised 12.5in into the cleaner airflow above the vehicle to increase downforce while minimizing drag, the wing is road legal thanks to its newly incorporated third brake light. Customers will receive their cars with the wing set to the least aggressive of its three available angles, optimizing front/rear balance for road driving. The more aggressive angles – which can be set by a McLaren retailer – increase rear downforce still further, contributing to a maximum of 408lbs and enabling even quicker circuit-running.

While the rear wing quite literally stands out as an obvious distinguishing feature on the 620R, it is not the only component adapted from the GT4’s aggressive track specification to meet road homologation standards. The front bumper, splitter and bonnet have been redesigned – the splitter retaining pronounced aero blades and cut-out – while the carbon fibre bonnet has twin nostrils to aid downforce and clean up the airflow over the top of the car. Downforce at the front of the car is further increased by dive planes that create vortices of low-pressure air at track level and help accelerate airflow along the car’s sides, as well as significantly aiding brake-cooling. The dive planes contribute up to 66lbs of downforce as part of the 143lbs delivered by the full frontal aero package.

In addition, the North American model can be specified with a special MSO upgrade package that features a gloss finish Visual Carbon Fibre roof with a roof scoop to maximize engine intake and exhaust sound, MSO Defined gloss finish carbon fibre roof cantrails and the McLaren Track Telemetry system with lap time function and 3 cameras to record those exhilarating track moments – all at no extra cost.