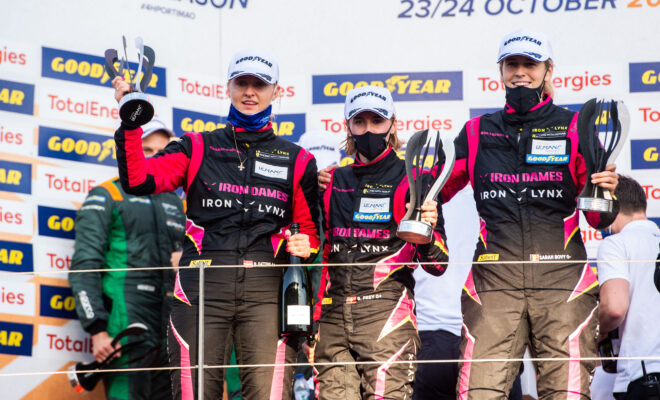 Italian racing team, Iron Lynx, has dominated the final rounds of this season’s Michelin Le Mans Cup and European Le Mans Series, winning both races and once more bringing the Iron Dames on to the podium.

Early Sunday morning saw cars #8 and #9 take on the final race of Michelin Le Mans Cup in the GT3 class. With the team already having secured the championship title for their class in the penultimate round, it was Paolo Ruberti in car #8 battling for the drivers’ championship trophy. But a puncture with Gabriele Lancieri at the wheel on the first lap cost valuable time and it was looking like all was lost. But following a determined effort from teammates Lancieri and Ruberti saw car #8 making its way through the field to recover from the puncture and finish in first place, with Ruberti finishing the drivers’ championship in second place.

Meanwhile, in the Iron Dames car #9, we saw hard driving from Manuela Gostner who was leading the class by the half-way mark before handing over to Doriane Pin. Doriane drove a mega stint having the lead of the race securely in her hands but lost time due to prototype traffic followed by a technical fault which caused her to retire with just 25 minutes left of the race.

Later on Sunday, for the final race on the European Le Mans Series calendar, 4 Hours of Portimao, it was Rino Mastronardi who started car #80 in seventh place on the grid, but a strong start from the competitive Italian saw him leading the class by the end of his first lap! Rino pulled away increasing his lead until a red flag stopped the race. At the restart the gap with the Porsche was really tight and after a long fight with team mate Matteo Cressoni, the rival Porsche managed to pass just before the beginning of the last hour. With a super pit stop the mechanics managed to put the car back on the track in first place and Miguel Molina held off the Porsche until the chequered flag bringing home the final victory and the title.

The Iron Dames car #83 was started by Sarah Bovy in fifth place, who impressed with her performance making her way through the field and was hot on the heels of Rino in car #80 to create a 1-2 lead. Handing the reins over to Michelle Gatting who drove a fantastic stint and was the fastest car on track for most of the time, closing her drive only five seconds behind the lead car. Rahel got in for the last stint building on the success of her team mates to bring the car home on the podium.

Iron Lynx team principal, Andrea Piccini, commented: “Today, we have realised a dream come true. To finish both Michelin Le Mans Cup and European Le Mans Series as champion winners is a great achievement and I am very proud of what the team has achieved, from the drivers to the mechanics.

It has been a very challenging year, we learned a lot, the whole team grow together and in this last weekend we showed the full potential of Iron Lynx dominating the weekend.”