2021 Rolls-Royce Ghost Is the Latest in Sharp Understatements - Carsfera.com 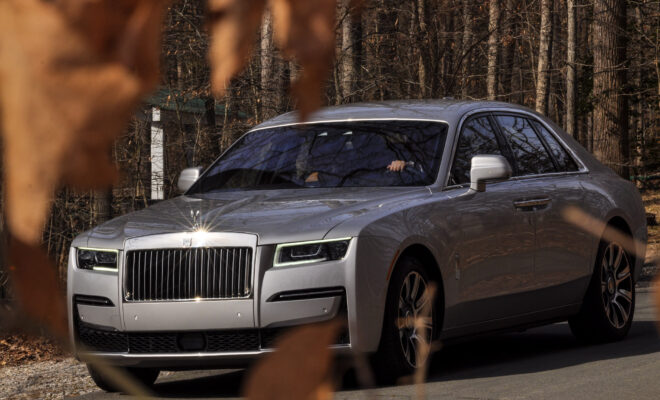 2021 Rolls-Royce Ghost Is the Latest in Sharp Understatements

The Ghost lived on for 11 years, a lifetime in automotive terms and became the most successful model in the company’s 116-year history, its “Post Opulence” statement is more evident.

The 2021 Rolls-Royce is the company’s effort to get past being opulent; it’s almost unopulent but does not get there. Opulence is generally associated with excess, but here the company is trying very hard not to be ostentatious. However, Rolls-Royce has delivered a vehicle with personality and comfort only possible in the context of over $300,000. If you ask us, the Ghost isn’t any less opulent; it’s just that it has taken a turn for the serious this time around. The more dignified design, with easy driving and lavish comfort, is at least in our definition excessive, but that, in this case, a very good thing.

No longer is the Ghost banking on a soft design, and for the most part, has come out from under the shadow of the Phantom. To many, those softer lines and submissive posture appeared almost whimsical, something you don’t want to associate with the Rolls-Royce design. Fortunately, small changes like moving the front axle forward, flattening many surfaces, and sharpening all the creases make the 2021 Ghost more assertive and imposing, maybe even more than the Phantom.

Despite appearances, the Ghost boasts of a 6.75 liter twin-turbo V12 that produces 563 hp and 627 lb-ft of torque. 0-60 mph sprint in an effortless 4.6 seconds en route to a limited top speed of 155 mph. Fuel consumption numbers are not an issue for Ghost owners, as you’ll be lucky to see over 20 mpg.

The Sharper Dynamics of the 2021 Ghost

The newfound self-confidence of the 2011 Ghost has carried over onto its driving experience as well. The previous Ghost handled like most other Rolls-Royce vehicles; it was clunky and required slowing down for the most accommodating corners to make it more comfortable for those riding in the back. However, the new Ghost does away with that; it defines a tighter, more refining cornering experience that will appeal to those six-figure money makers who enjoy driving their own vehicles. Interestingly it does all of this without compromising the so-called magic carpet ride, raising the bar for others in Rolls-Royce’s lineup.

The 2021 Ghost has been built on what’s been dubbed the “Architecture of Luxury,” which the company’s representatives are adamant have nothing to do with the 7 Series, and that’s a very good thing. The approach has many benefits, one of which makes the car a joy to drive as much as it is to ride in. It handles better than any other in the company’s lineup, and it does that without any compromises.

Unlike previous generations of the Ghost, this latest generation does not isolate you, i.e., the people inside by design. The engineers tried building a more silent car than any other before it, but customers reported feeling unnerved. That lead to the company taking an entirely different approach by allowing white notice into the vehicle. Now you can hear the engine roar a bit, and the soft rustle of air through the vents, with a slight thumping sound, made each time the rubber makes contact with the asphalt below it. Fortunately, you don’t hear obnoxious noises like that of wind hitting the mirrors or rattling windows, which unfortunately marred the experience of the previous Ghost.

To many, the deliberate inclusion of noise says something about the direction the company is taking. The choice feels deliberate and welcome as the whimsy is being traded for directness. No longer does the Ghost walk the thin line between having old-world design cues while attempting to add lots of modern technology to the cabin. The new Ghost does not waste time trying to hide all the technology and excellent craftsmanship; in fact, it embraces them, almost forcing them to work in tandem.

Apart from taking the direct approach to appearances, that same methodology has been applied to many of the functional upgrades to the vehicle. The 2021 Ghost now boasts of all four fully electric doors, which open and close with the push of a button. The same goes for the foldable picnic tables and multimedia tables which are now motorized and will automatically hide the tables with the touch of a button.

The BMW iDrive rotary controller for passengers in the back seat is now hidden behind a slick wooden cover, which is quickly out of the way when not in use. The same goes for the infotainment system and the controller, both of which are imperative to the vehicle’s operation but are clearly visible and add to the high-tech interior of the 2021 Rolls-Royce Ghost instead of being hidden away.

The theme for the third-generation Rolls-Royce seems to be, “we make no effort to hide what shouldn’t be hidden.” We agree that the Ghost no longer pulls punches, which is why it can deliver an enhanced, almost modern luxury experience. It is an experience that will have many people upgrading to the third generation Ghost.

Since the Rolls-Royce Ghost debuted not very long ago, it was often considered a lower-tier model for those who couldn’t afford the Phantom. It was perhaps more for people who enjoyed being associated with the marque but couldn’t afford to buy the best that the company had to offer.

After having tested the 2021 Rolls-Royce Ghost, we can say that it will be hard for many to maintain those beliefs. The Ghost has evolved into one of the best that Rolls-Royce has to offer, and it has done this by coming out from under the shadow of the Phantom. It is better looking, more comfortable, easier to enjoy driving in, and embraces the bold decisions designers and engineers have made to assure success.