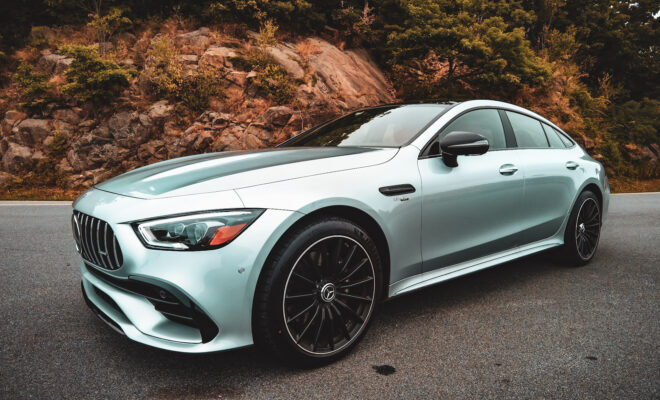 The 2021 AMG GT43 is a brand-new AMG and a new entry to the four-door coupe. The GT 43 slots right below the GT 53 and the full-flat GT 63. However, the 43 uses the same engine as the 53 but it has been detuned to deliver up to 362 horses with 369 lb-ft of torque, which means it is less powerful than the CLS 53, despite using the same platform. But is the difference noticeable?

We got the chance to take the 2021 AMG GT43 for a spin, and this review reflects our opinion about the look, feel, and performance of Mercedes’ latest entrant.

The first time we saw the 2021 AMG GT43, it looked every bit like a modern Benz; in fact, it uses the same design language but is modified for what’s intended to be a semi-practical four-door coupe. We could see shades of the two-door GT, especially near the rear LED taillights, though the front utilizes a generic Mercedes-Benz design, resembling the CLS-Class.

The 2021 AMG GT43, as stated above, uses the same slightly detuned engine as the 53. It also has Mercedes’ EQ boost, with a 48-volt mild-hybrid system which augments its outputs with an extra 21 hp and 184 lb-ft of torque. It helps take the pressure of powering the ancillary systems from the engine with the electric motor handling the low end, with a smooth start/stop. The 2021 AMG GT43 can go from 0-60mph in just 4.8 seconds which is a hair slower than the 53, but it’s to be expected.

The 2021 AMG GT43 feels far more luxurious than both the 53 and 63, with a few exclusions that aren’t readily noticeable. Living up to the GT name is the prominent center console inspired by the GT sports car, but the various screens don’t bear the retired COMAND setup but are instead part of the new MUBX infotainment architecture, which means they look fantastic.

The 43 is a strict four-seater, with two body-hugging seats in the back separated by a center console giving the vehicle a cockpit-like feeling.

The seats feel a little stiff, but they are overall some of the most comfortable ones we’ve had the pleasure of riding on. The 41.7 inches of legroom in the front and the rear passengers get 35.5 inches which is more than enough for most people.

The 2021 AMG GT43 is one of the best vehicles out there, especially for those looking for a less expensive version of the Panamera, an A7, or an 8 Series Grand Coupe. Though if you have $10k extra, the 53 is the best out of the three. However, the GT 43 strikes the perfect balance of size, features, and overall performance for a price that’s near impossible to beat by its German rivals.