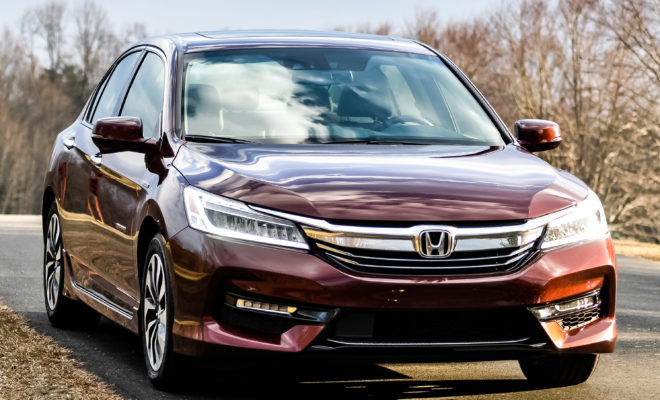 The 2017 Honda Accord Hybrid is a roomy, safe, spiffy and a more than adequately equipped hybrid in this category. The stellar 48 MPG makes it one of the most fuel economical cars currently available. Not to mention the fact that it can masterfully glide silently across some of the toughest tarmacs in America. Add to that its excellent safety scores and great resale make owing the Accord hybrid worthy of your hard-earned money…but there is more! 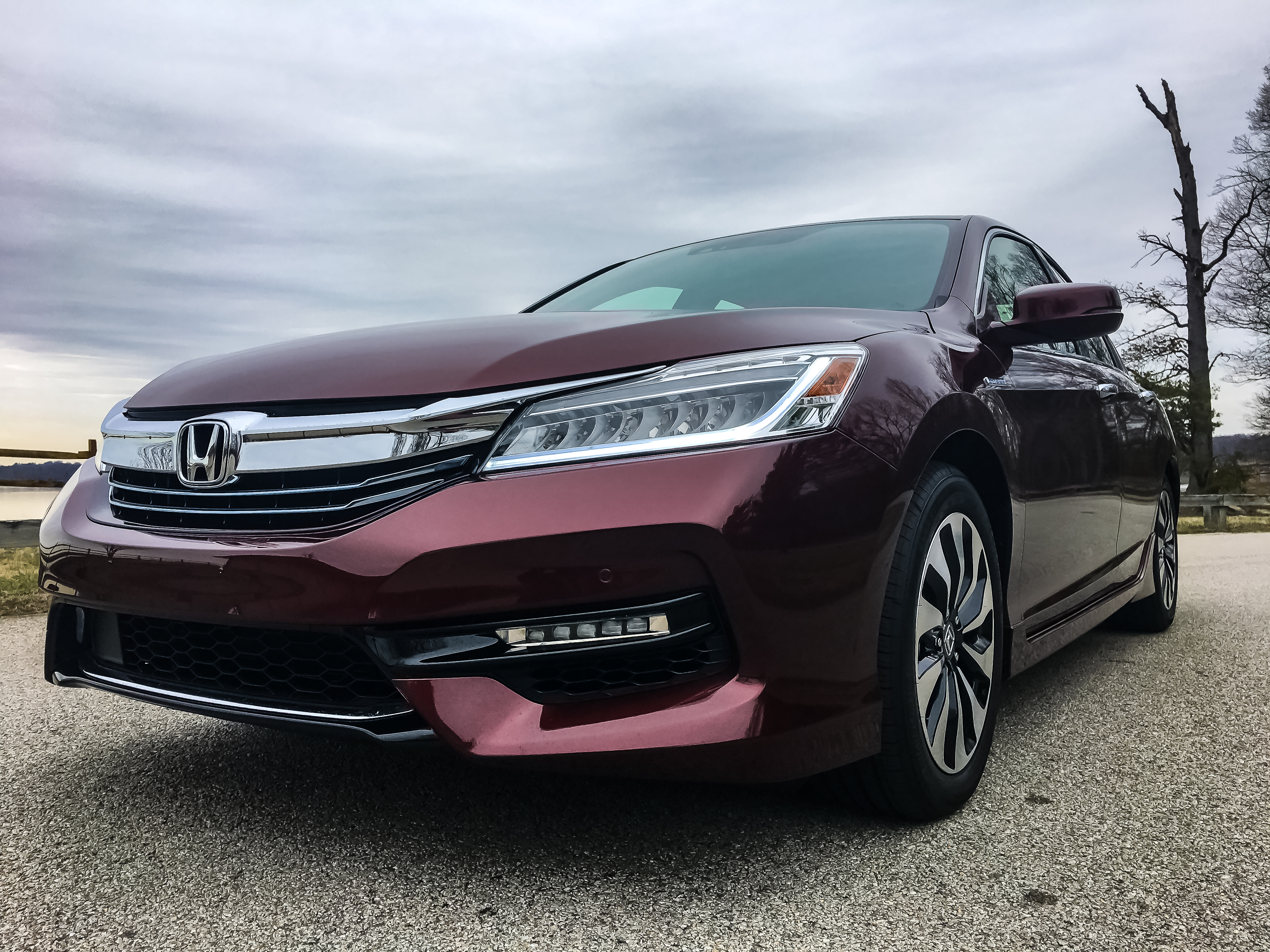 The Honda Accord is ranked amongst the top-selling cars in North America right alongside the Toyota Camry. It is an every person stalwart which is conceived and built for Americans in America. The only exception is the hybrid version which is built in Japan. The hybrid has made a return after a 12-month hiatus after the company dropped their short-lived plugin version.

Under the Hybrid Hood 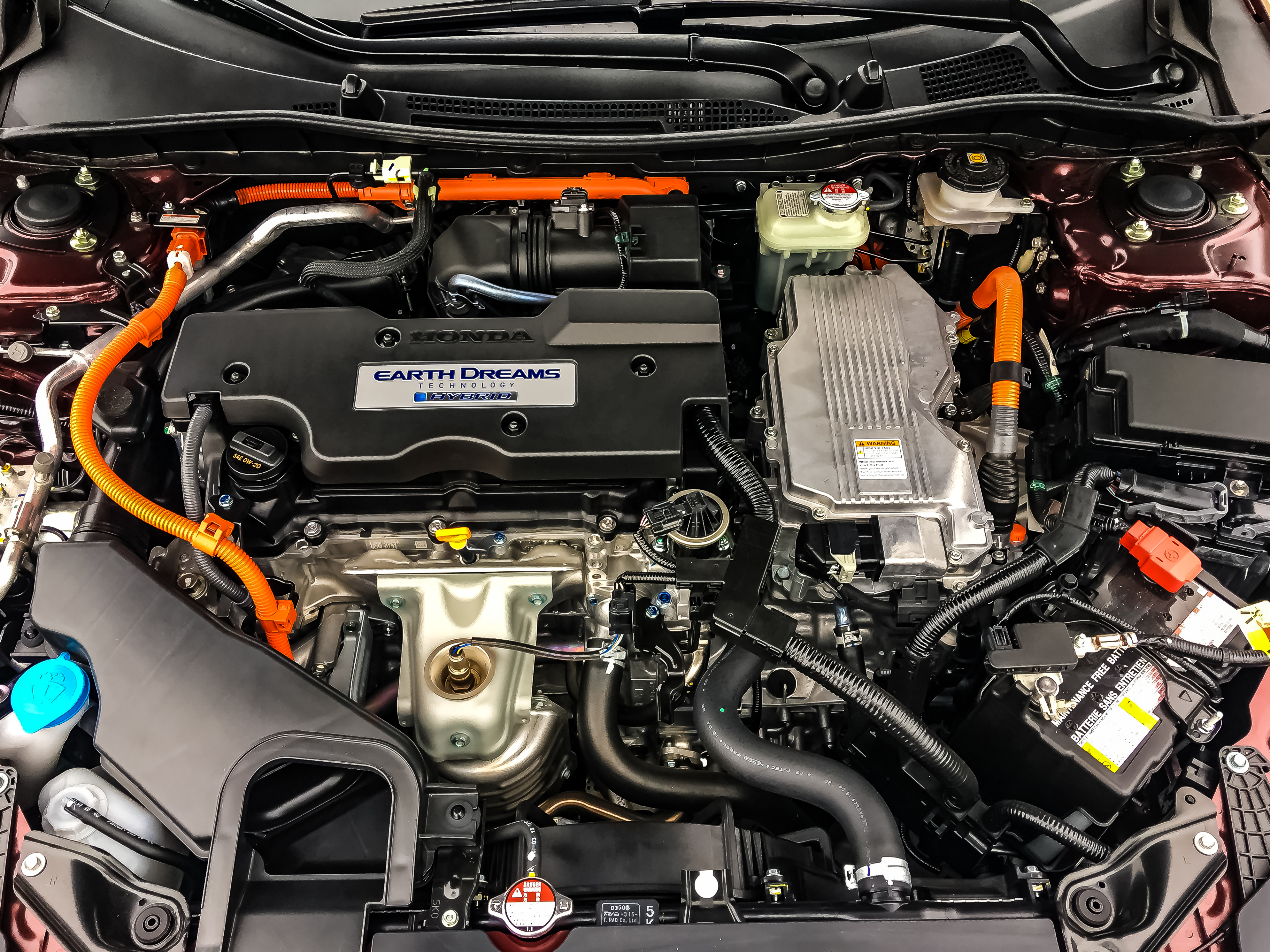 The 2017 Honda Accord Hybrid Touring has stuck to the tried and thoroughly tested formula which it dubs as a two-motor hybrid. The system is pretty much the same as what you’ll find with a Toyota Prius. The 2017 Hybrid comes packed with a four-cylinder engine under the hood, alongside two electric motors and the latest lithium-ion battery pack snuggly hidden behind the vehicle’s rear seats. The total power output of 212hp is delivered through its continuously variable transmission which is whisper smooth and notoriously durable. It is capable of delivering a blistering fast 0-60 in just 7 seconds, much quicker than the Prius and Camry in this price range. 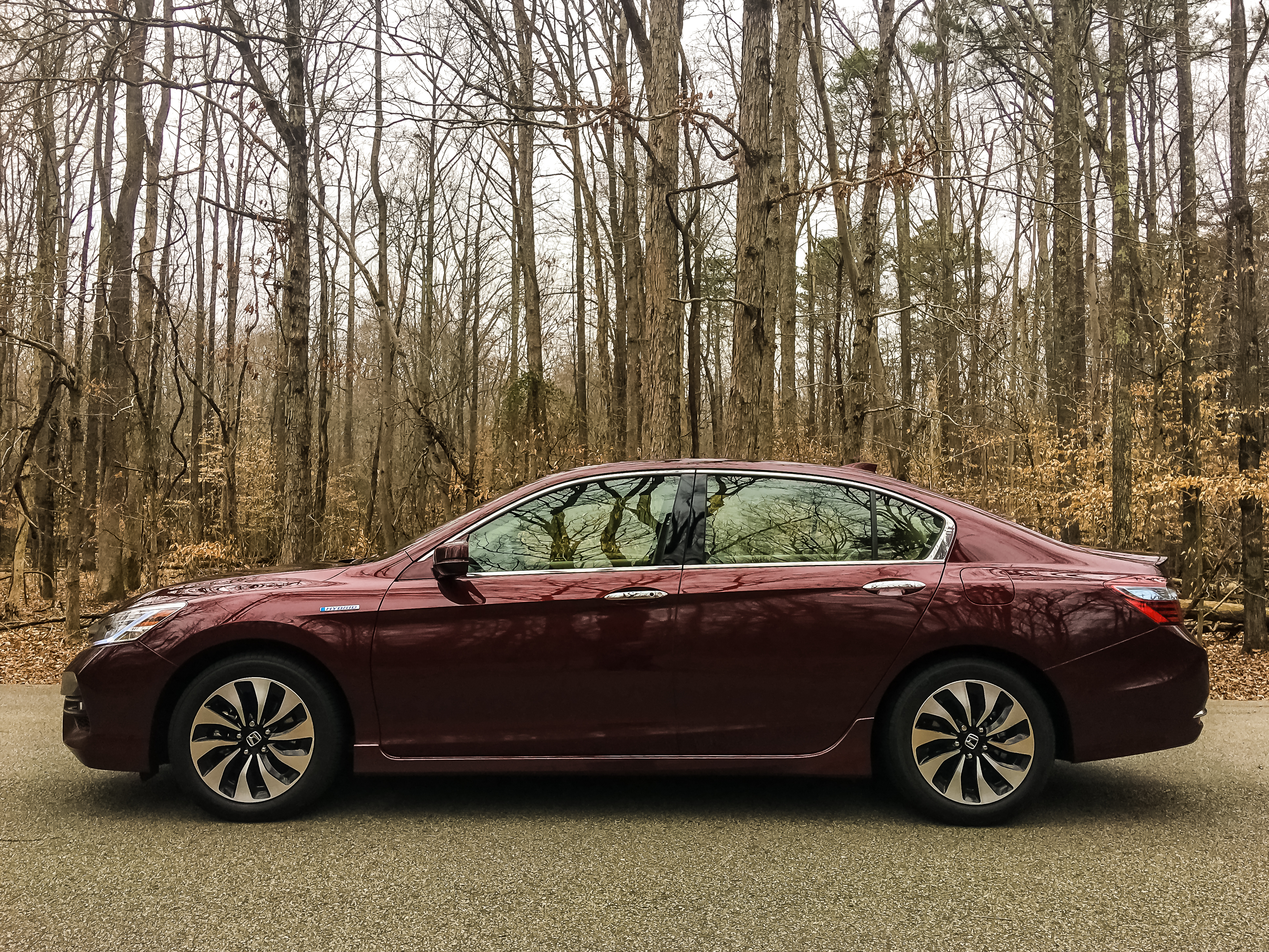 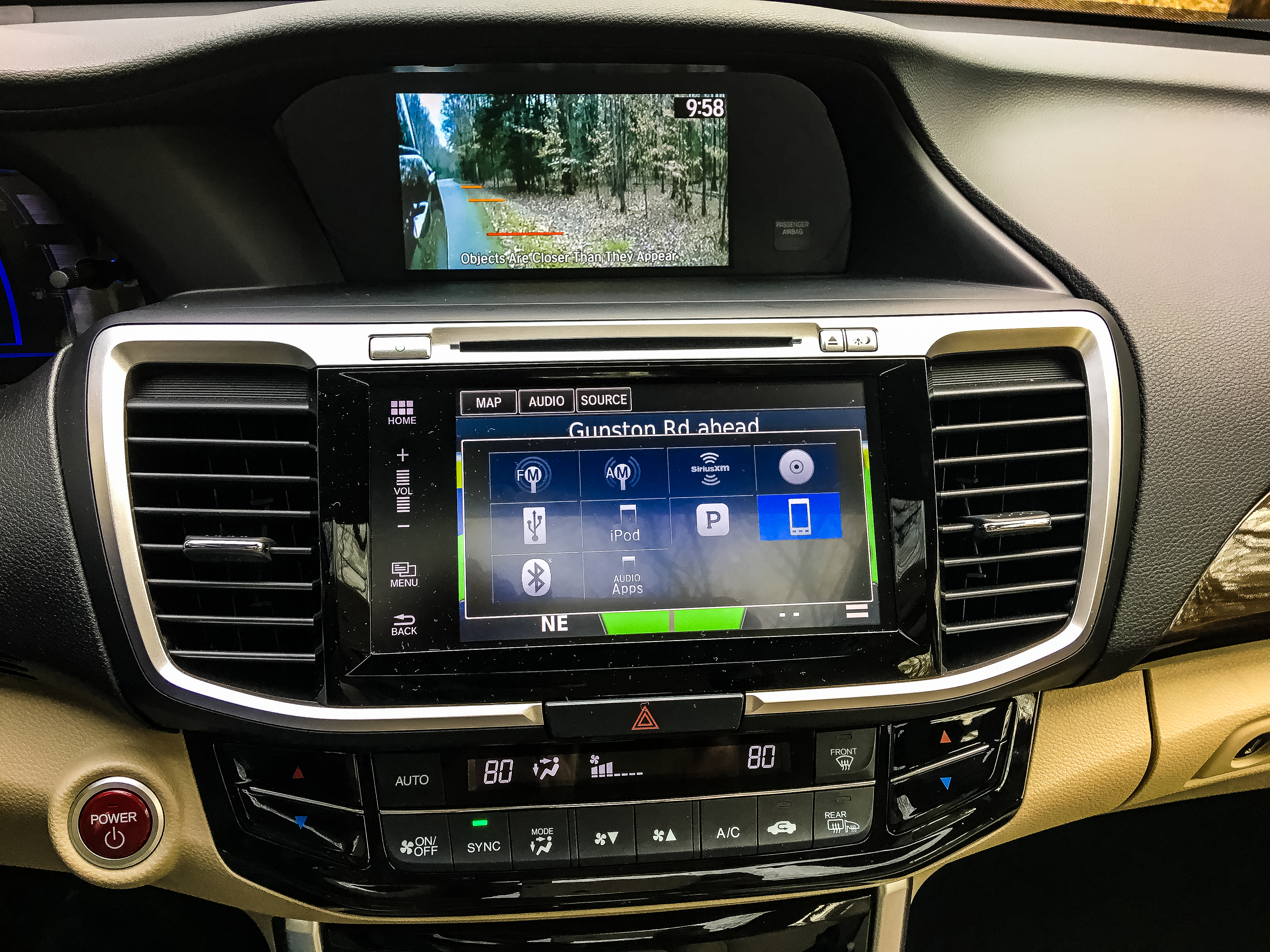 The 2017 Honda Accord Hybrid has ditched the dull look for a new business class, swanky persona. The design is both simple and elegant, with excellent build quality. The 7.7-inch display in the large dash makes controlling everything from the sound system to the navigation very convenient for anyone who has driven an Accord before.

An Exquisite Level of Comfort 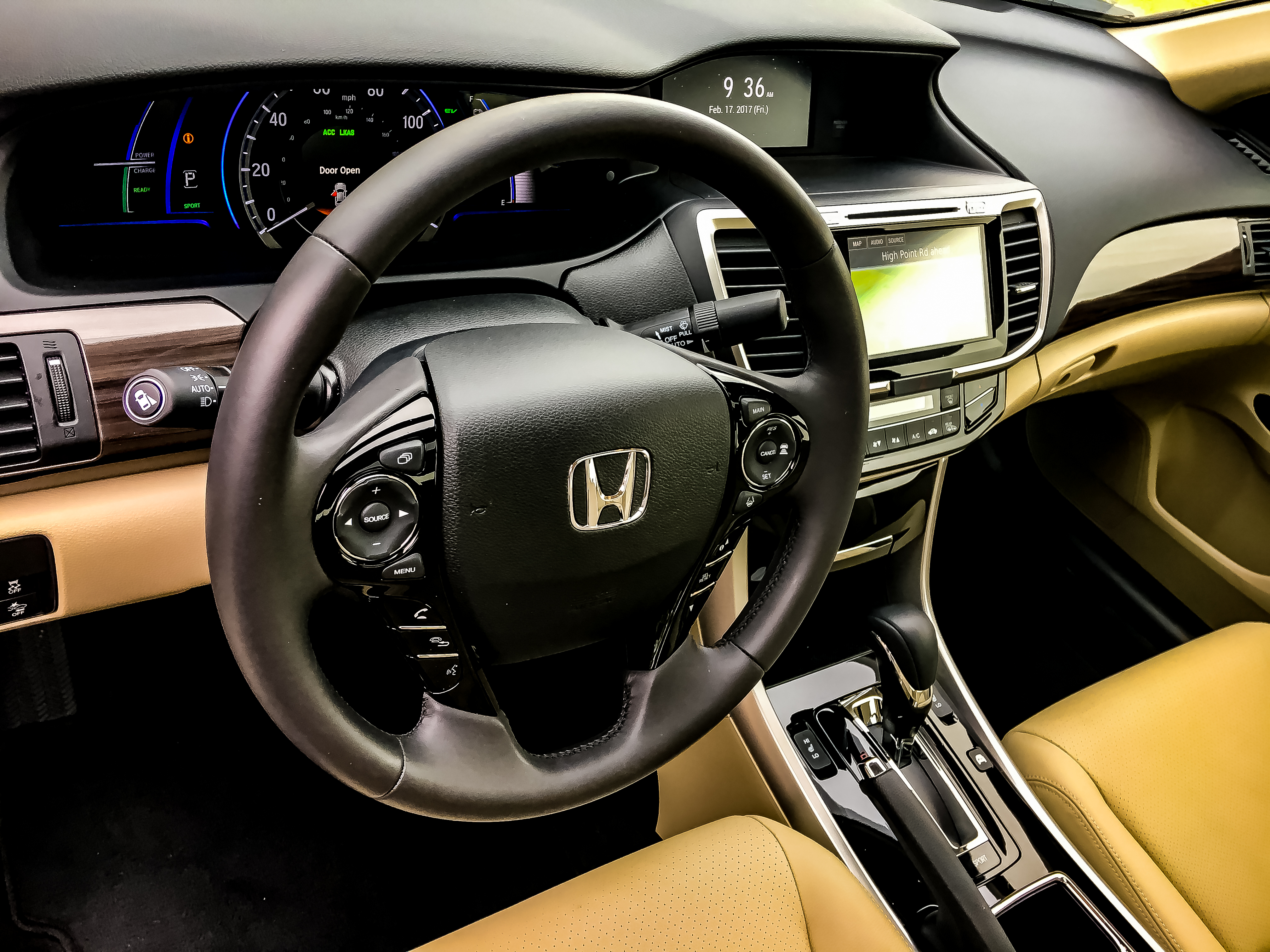 One of the outstanding features of the 2017 Honda Accord Hybrid Touring is the generous amount of legroom and shoulder room in the back seat. It is the best in its class in our opinion. The cabin is exceptionally quiet, plus there is zero tire noise. Outward visibility is made possible by the vehicle’s very low beltline, slim pillars and a full glass covering almost the entirety of the front makes driving it a pleasure. 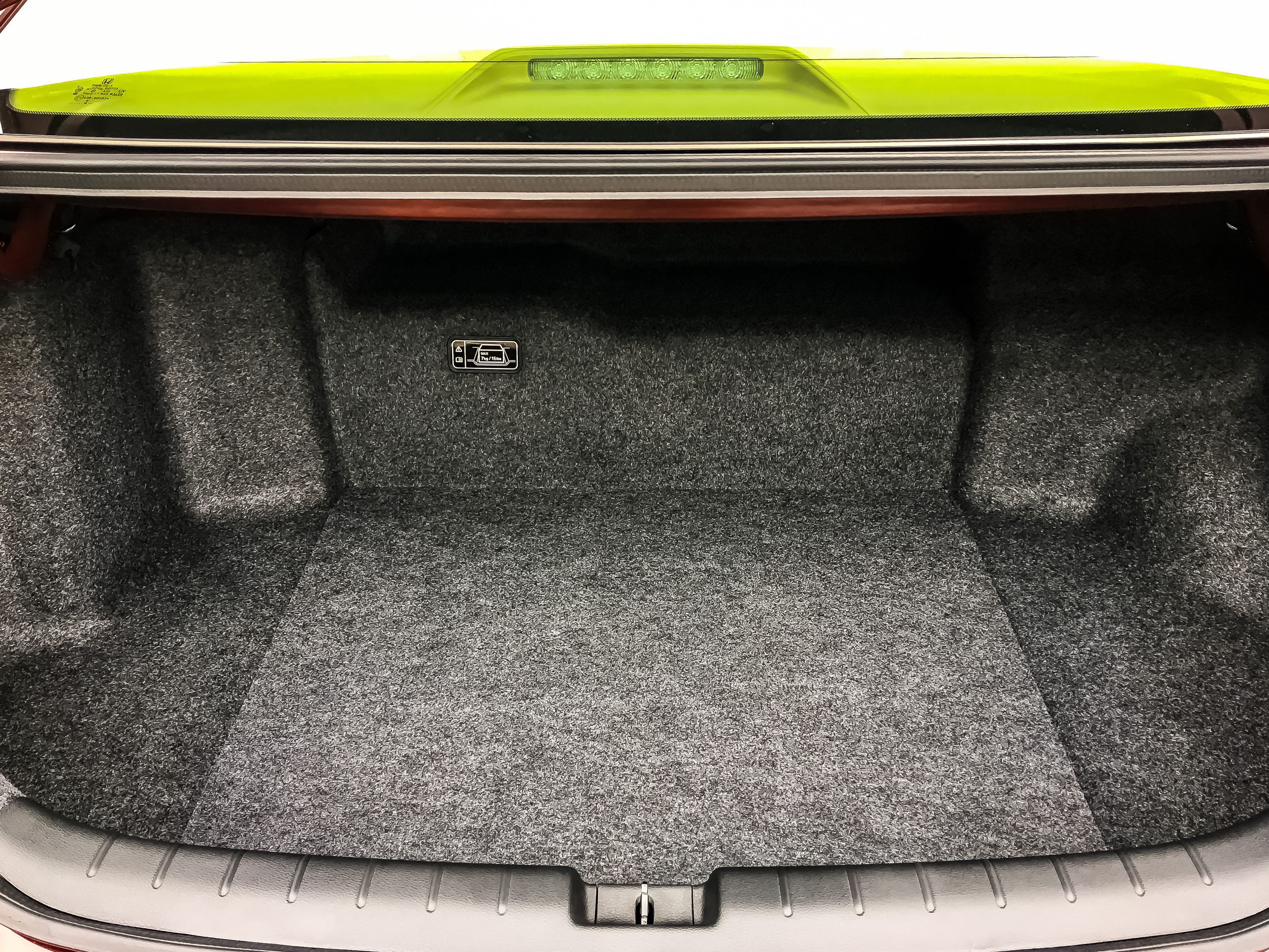 Pop open the trunk, and you’re greeted by 13.5 cubic feet of space capable of storing almost all size bags. Perhaps the only drawback is that the fold-down pass is missing. But that’s just us being nitpicky. 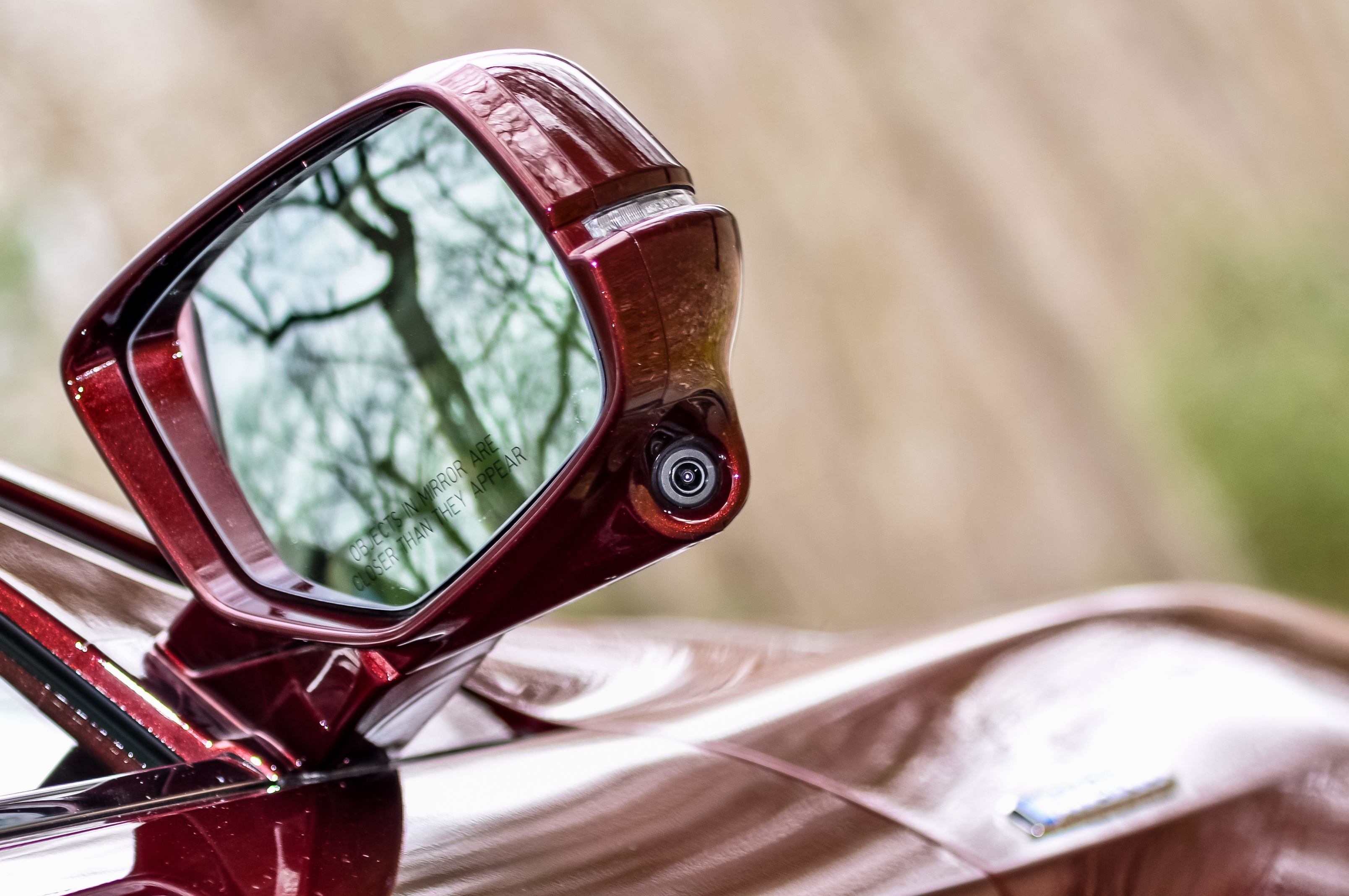 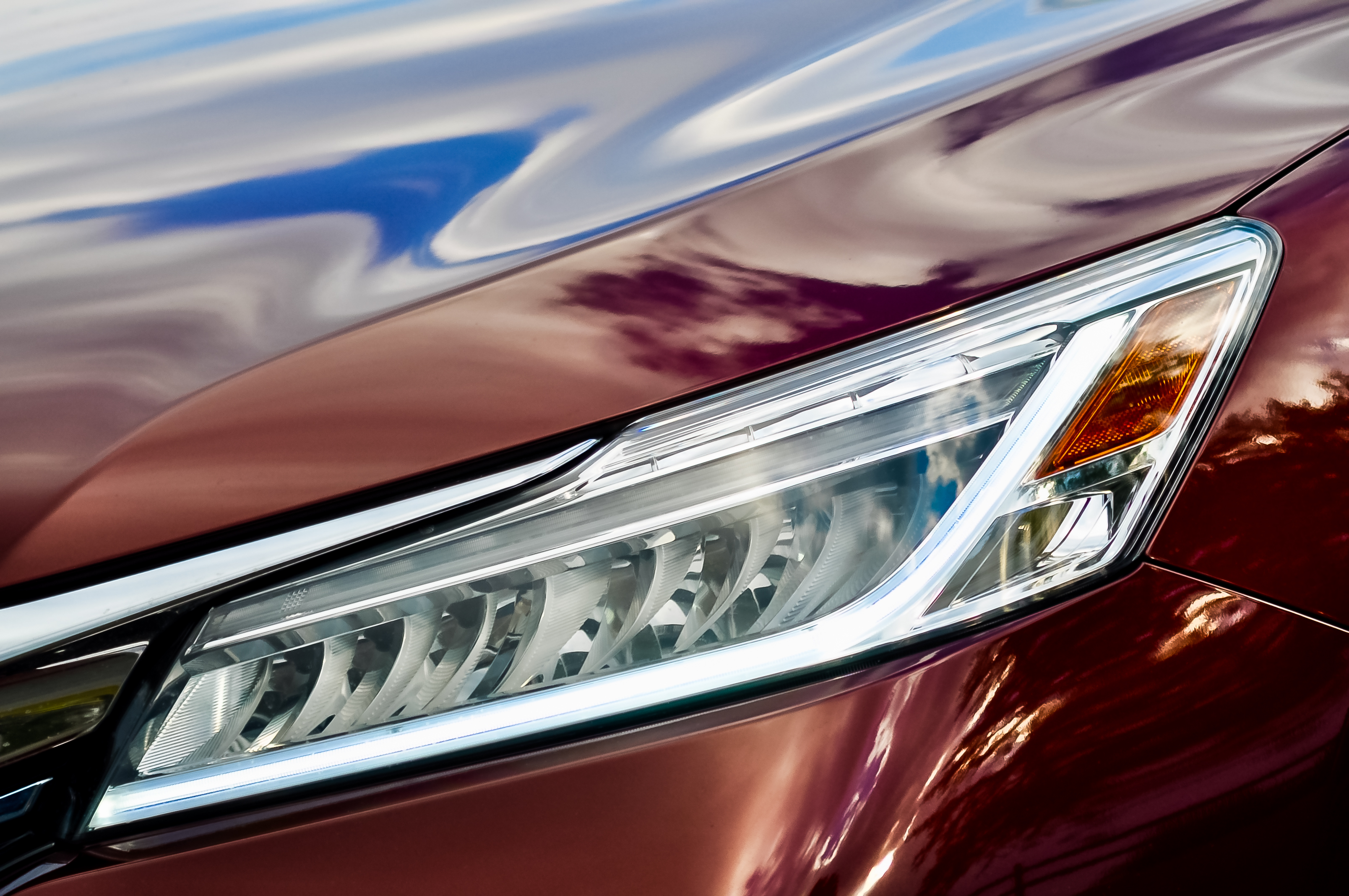 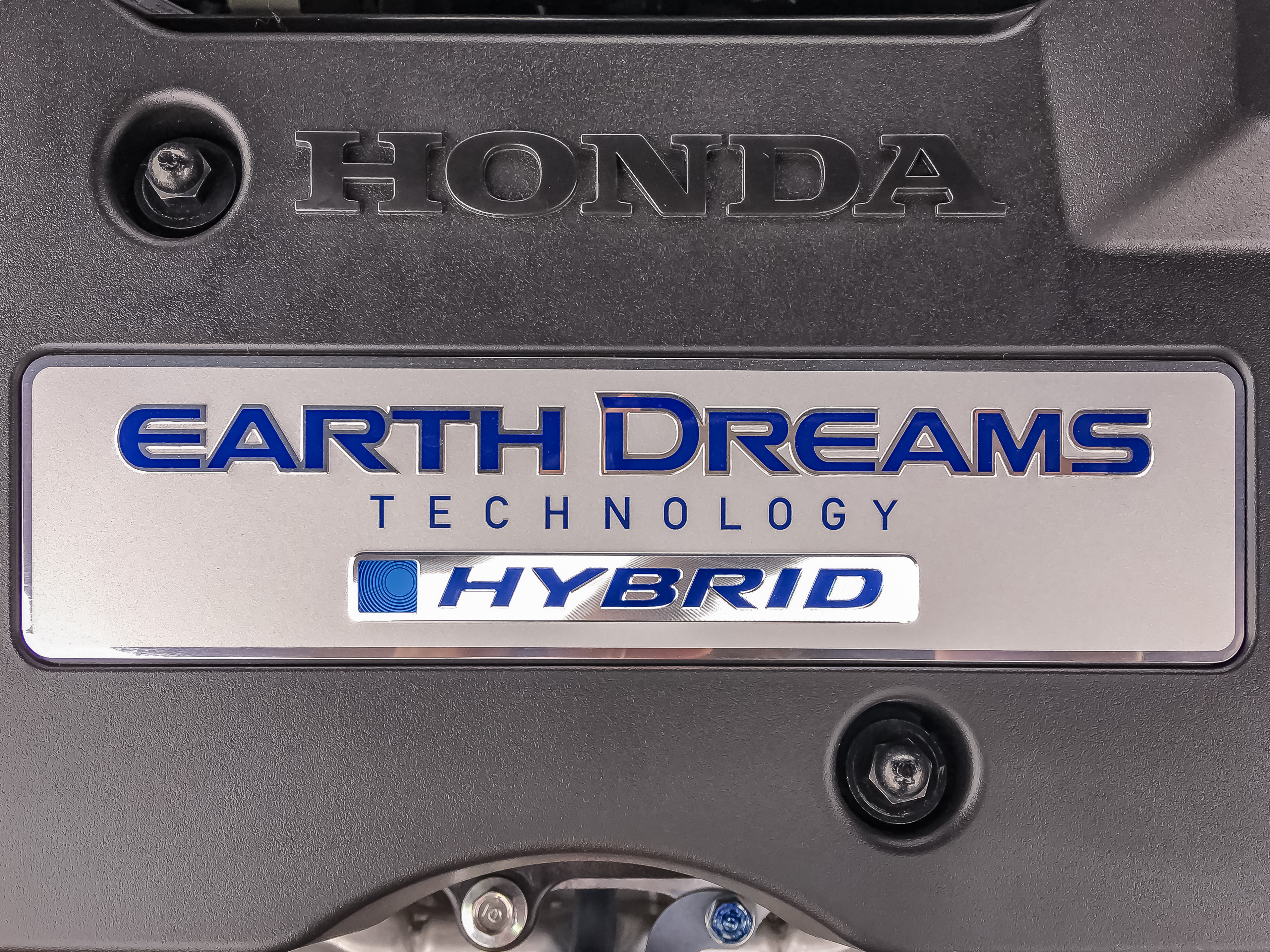 Thanks to the strong electric motor and the powerful gasoline engine working in tandem it’s no wonder that the 2017 Accord Hybrid is a beast at acceleration. Hit the gas and this sedan shoots with authority. At times the gasoline engine may become more noticeable especially at higher RPMs, but that’s nothing to complain about because at the end of the day you’re getting the best fuel economy in this class. The 2017 Accord is a sportier, more comfortable hybrid to drive especially since it handles tight curves masterfully. Its firm suspension while dampening 90% of road noise does add a bit of firmness to its handling. But that’s what made driving the car so much more appealing compared to the competing Toyota Camry Hybrid. 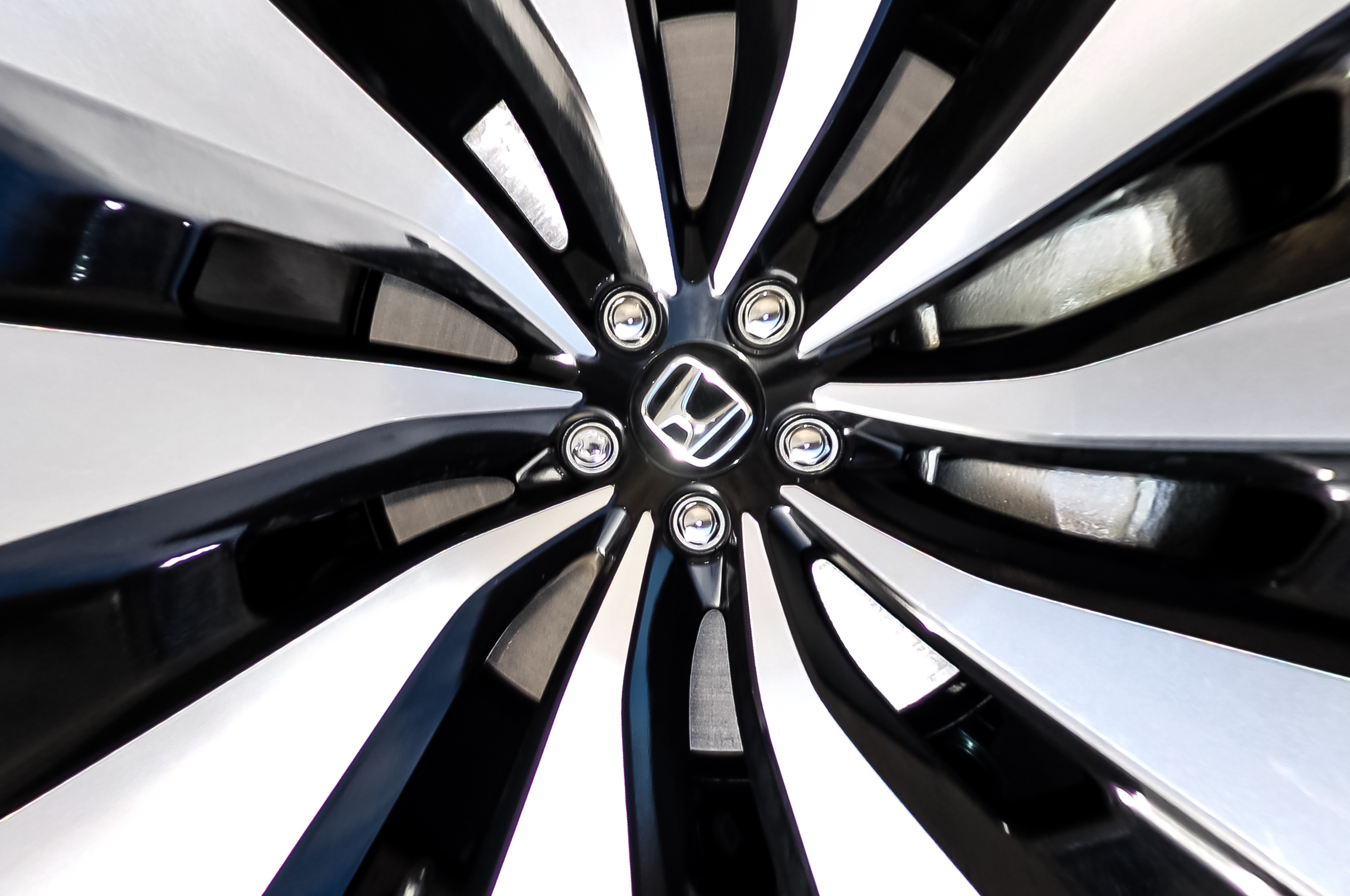 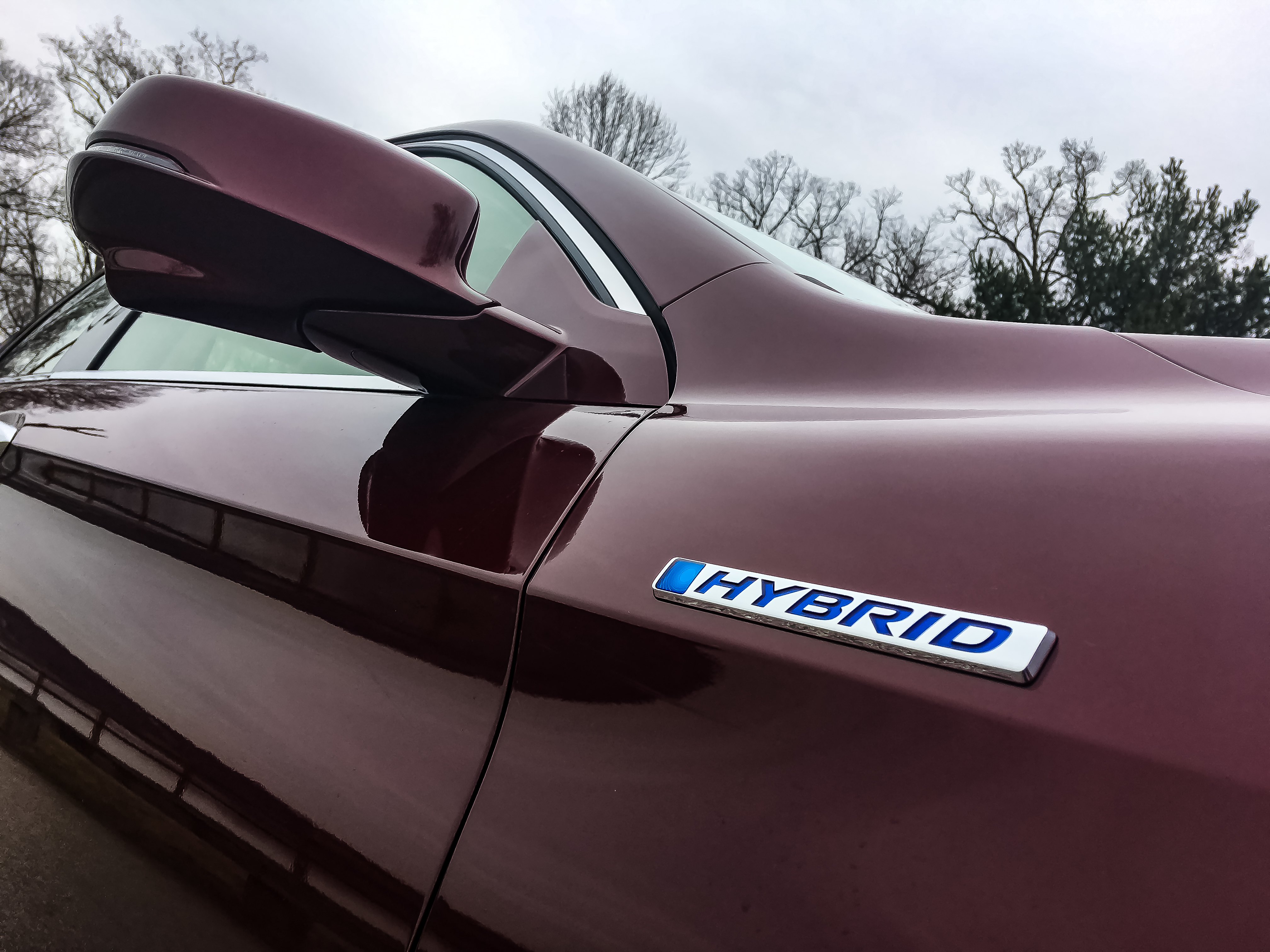 The 2017 Honda Accord Hybrid Touring is the Best Hybrid you can buy in America right now. Every aspect starting from its fuel economy to handling and comfort all put it ahead of its competitors. So, choosing it over others is a no-brainer!