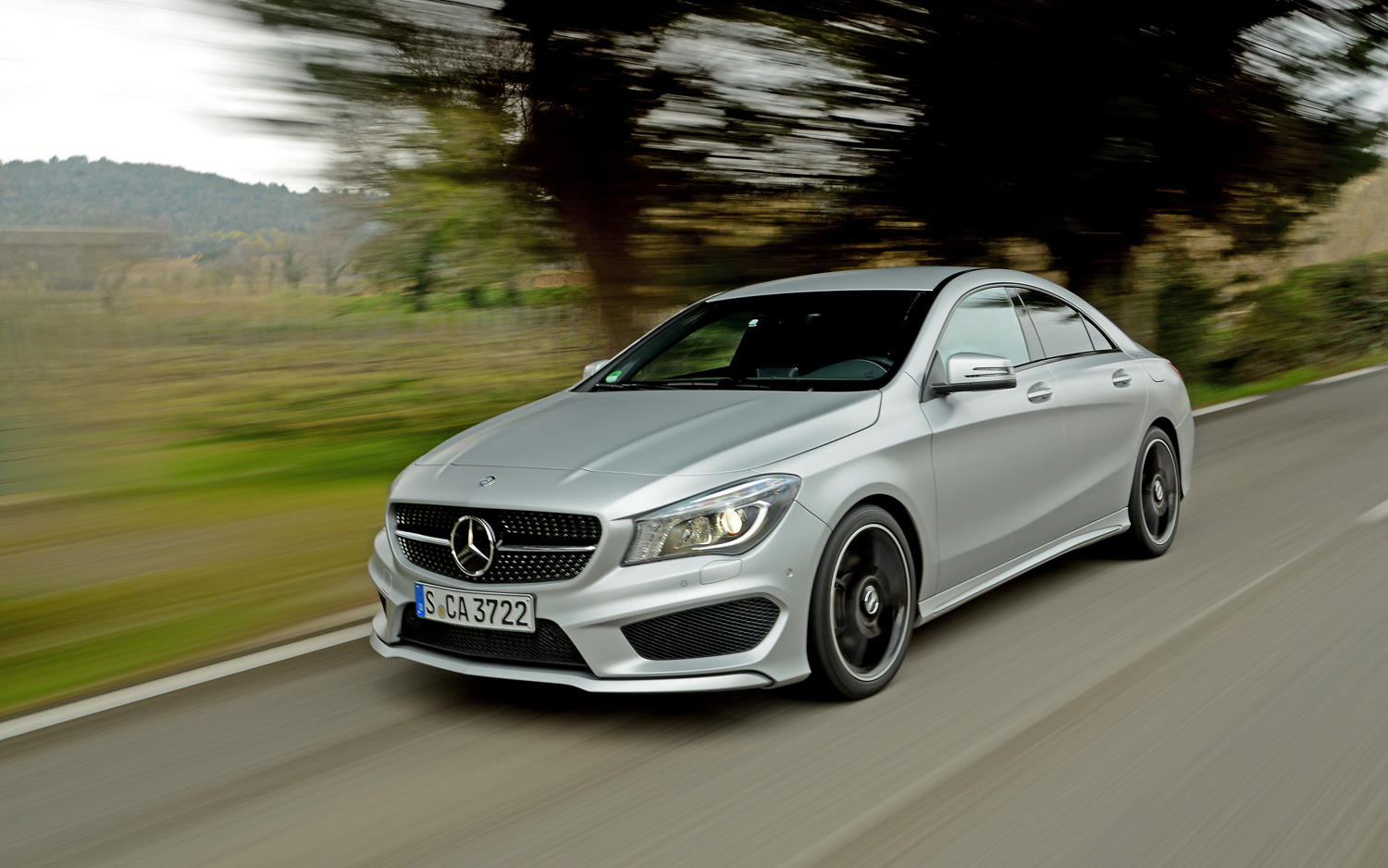 Mercedes-Benz has just introduced an all-new four-door coupe – the new 2014 Mercedes-Benz CLA250. It serves up a rebellious design form that borrows styling cues from the popular CLS, and carries the inspiration of the Concept Style Coupe show vehicle into series production. The front-wheel drive 2014 Mercedes-Benz CLA250 arrives in U.S. dealerships this September, to be followed later in Spring of next year by a 4MATIC all-wheel drive version, as well as a 2014 CLA45 AMG example, which will come to market this November. 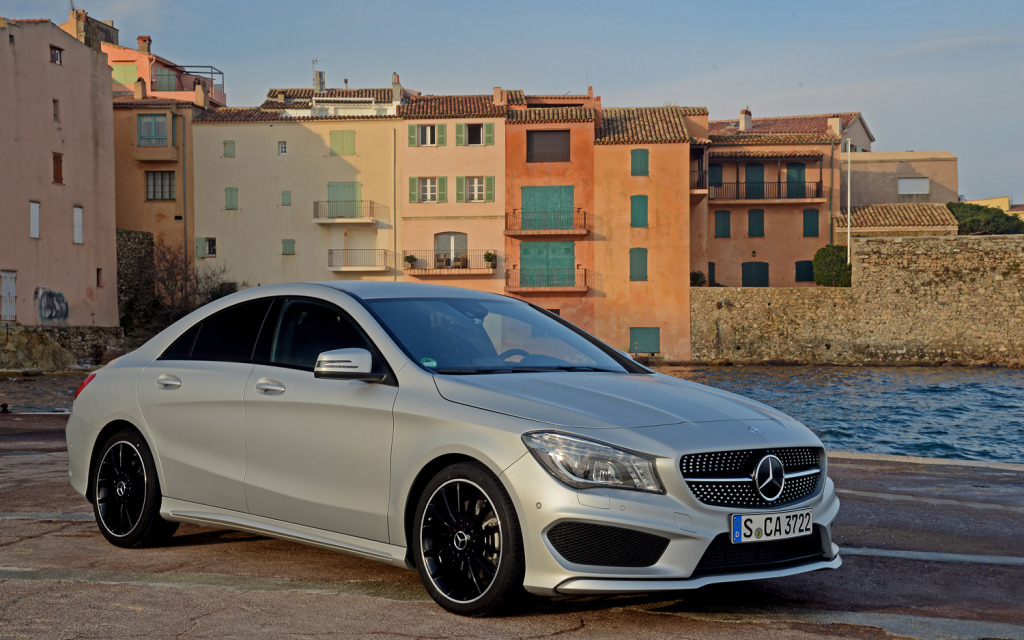 We’ll deal here with the 2014 CLA250, which Mercedes-Benz refers to as a Coupe, due to its coupe-like profile, but in reality, it is a four-door sedan that heralds a new era, resetting the gateway and an all-new segment for the Mercedes-Benz brand with a starting price of $29,900. Recalibrating the perception of value. It is actually positioned differently than the C-Class, costing nearly $5,500 less than the C250 sedan (which starts at $35,325).

Power for the CLA250 comes courtesy of a front transversely mounted, 2.0-liter DOHC, 16-valve, turbocharged, inline 4-cylinder engine with Direct Injection and ECO Stop/Start that makes 208 horsepower at 5,500 rpm, while generating 258 pound feet of torque in a range from 1,250 to 4,000 rpm. Redline comes at 6,500 rpm, and motive energy is transmitted to the front wheels via a seven speed DCT Direct Select automatic transmission with paddle shifters. 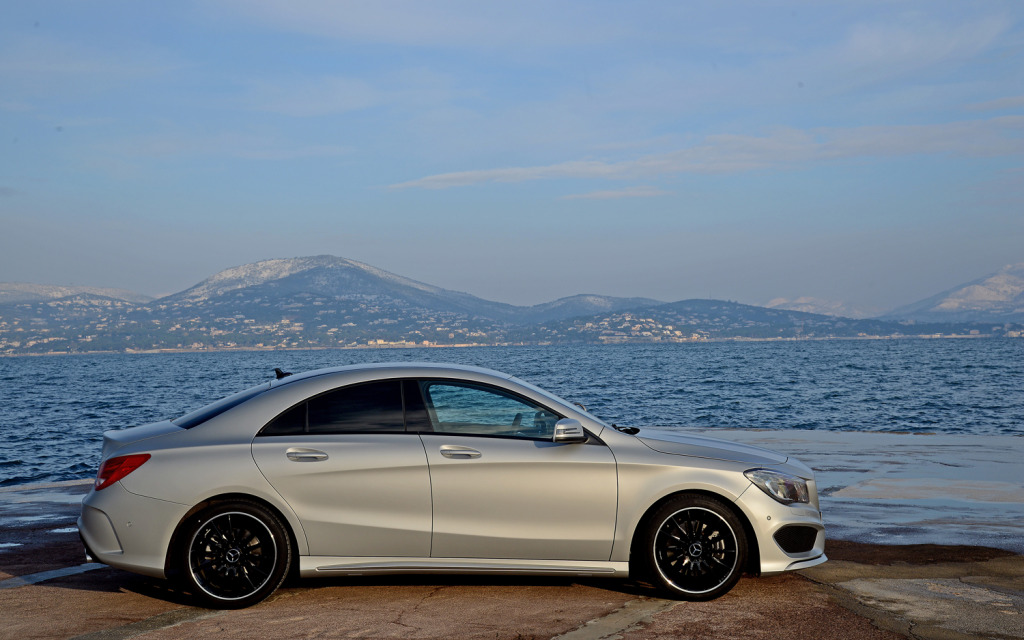 The CLA250 is both visually stunning and elegant, delivering sporty proportions along with a powerfully dynamic design language, showcasing interplay of convex and concave surfaces as well as complex character lines.

Striking features include the power domed hood and the diamond-look grille. The headlight arrangement and the LEDs behind the headlamp lens evoke the a “flame effect” for the optional daytime running lights and indicators. This light signature shapes a new, youthful Mercedes face and is a key aspect of the car’s energetic persona. There are a number of details indicating that the CLA ‘s design represents an extension of the modern classic Mercedes-Benz CLS. Three prominent lines provide structure when viewed from the side – the front structural edge above the fenders flows toward the rear in a dramatic dropping line, while another, more sinewy line spans the shoulder above the rear axle, while the third character line extends in a sweeping curve from the front wheel toward the rear. These lines combine, lending depth and dynamism to the CLA’s profile. 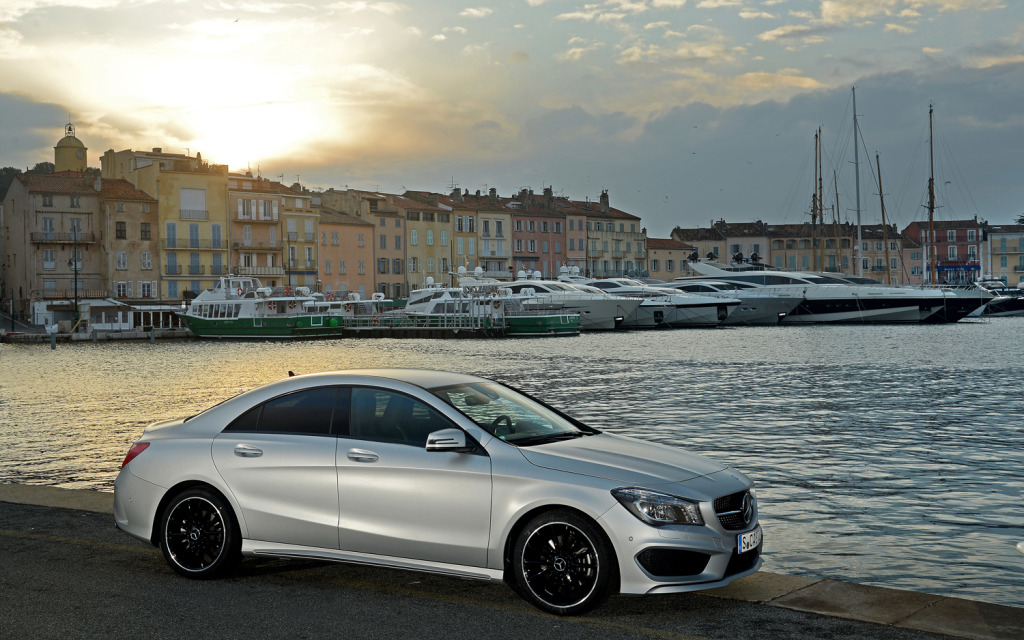 The rear end design serves to emphasize the CLA’s width, evoking a powerful expression and athleticism. The gently sloping roof contour and pronounced curve of the rear window deliver an overall coupe-style image. The athletic look of the rear end emanates from the drawn-in C-pillars in combination with the strong shoulder above the pronounced rear wheel arches and the tail lights are framed by the shoulder lines extending into the back while the horizontal light layout displays the car’s powerful and visually striking breadth.

A large panorama sunroof is available as a standalone option, consisting of a fixed polycarbonate cover at the front, as well as a glass moving panel and side trim elements to match the glass look.

Moving to the inside, the strength and athleticism of the CLA’s exterior carries through to the vehicles cabin. An Anthracite surface finish appears as the standard trim, with additional trim options that include burl walnut wood, black ash wood and brushed aluminum. The instrument panel incorporates five air vents, with the outer vent rings done in galvanized finish, while a galvanized insert controls airflow direction. The free-standing display is set in black piano-lacquer trim and edged with a flush-fitting silver frame.

I was afforded the opportunity to drive a pre-volume production 2014 Mercedes-Benz CLA250 with a Mountain Gray exterior finish, complemented by a Black MB-Tex interior. The base price amounted to $29,900. while the final price was elevated to $43,245. after adding for the metallic paint, Panorama Sunroof, Bi-Xenon headlamps with LED Tail amps, the Premium Package, Multimedia Package, Sport Package, Driver Assistance Package and Destination and Delivery charges. 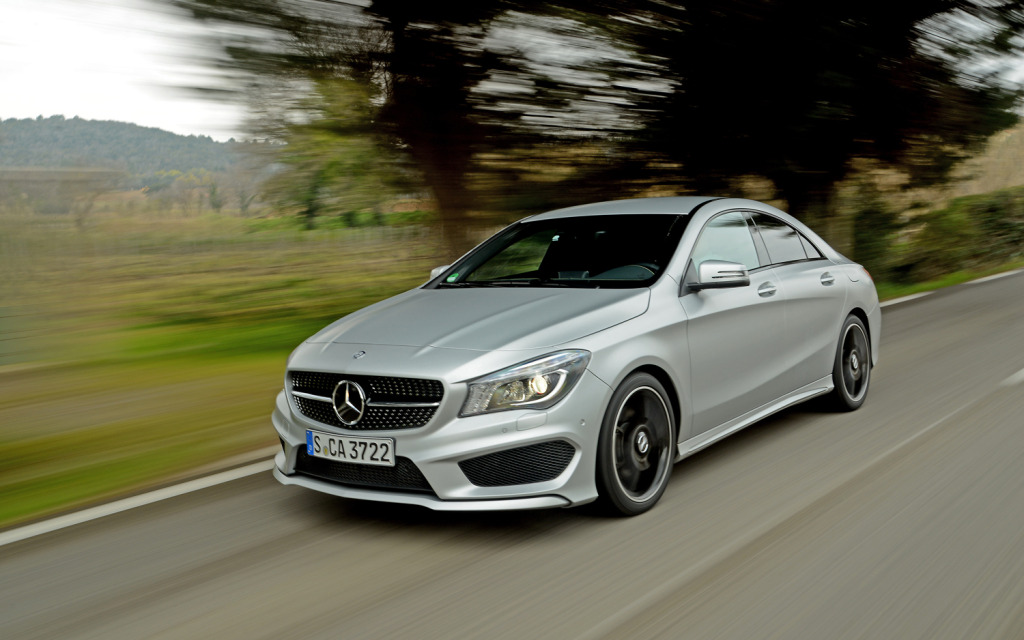 SUMMARY: Yes, the CLA45 AMG that we also drove is a cut above, but the CLA250 is certainly more than adequate and really lacks nothing in terms of outstanding performance attributes and sexy, visual magnetism. It was designed to take one’s breath away, and does so effortlessly.

The ride quality is firm, planted and stable, but never objectionable or uncomfortable, and the handling attributes are absolutely sporty in their nature, with a positive on center steering feel and responsiveness from the electro-mechanical system The road holding ability of the CLA250 is what one looks for in a sports sedan (whoops, I meant Coupe). Its traction speaks louder than words.

The CLA presents a globally positive business case primarily due to the economies of scale for the NGCC (‘New Generation Compact Cars’) for which three cars are planned based on this platform with a high corresponding overall volume. The CLA was designed to only have four-cylinder engines rather than the C -Class’s multiple offerings of a 4 cylinder, V6 or AMG V8, allowing for a simpler and more efficient crashworthiness development. The CLA is also produced in Hungary, which also further helps making its pricing structure a positive issue.

The 2014 CLA250 definitely qualifies as a new star in what is already an impressive Mercedes-Benz stable.