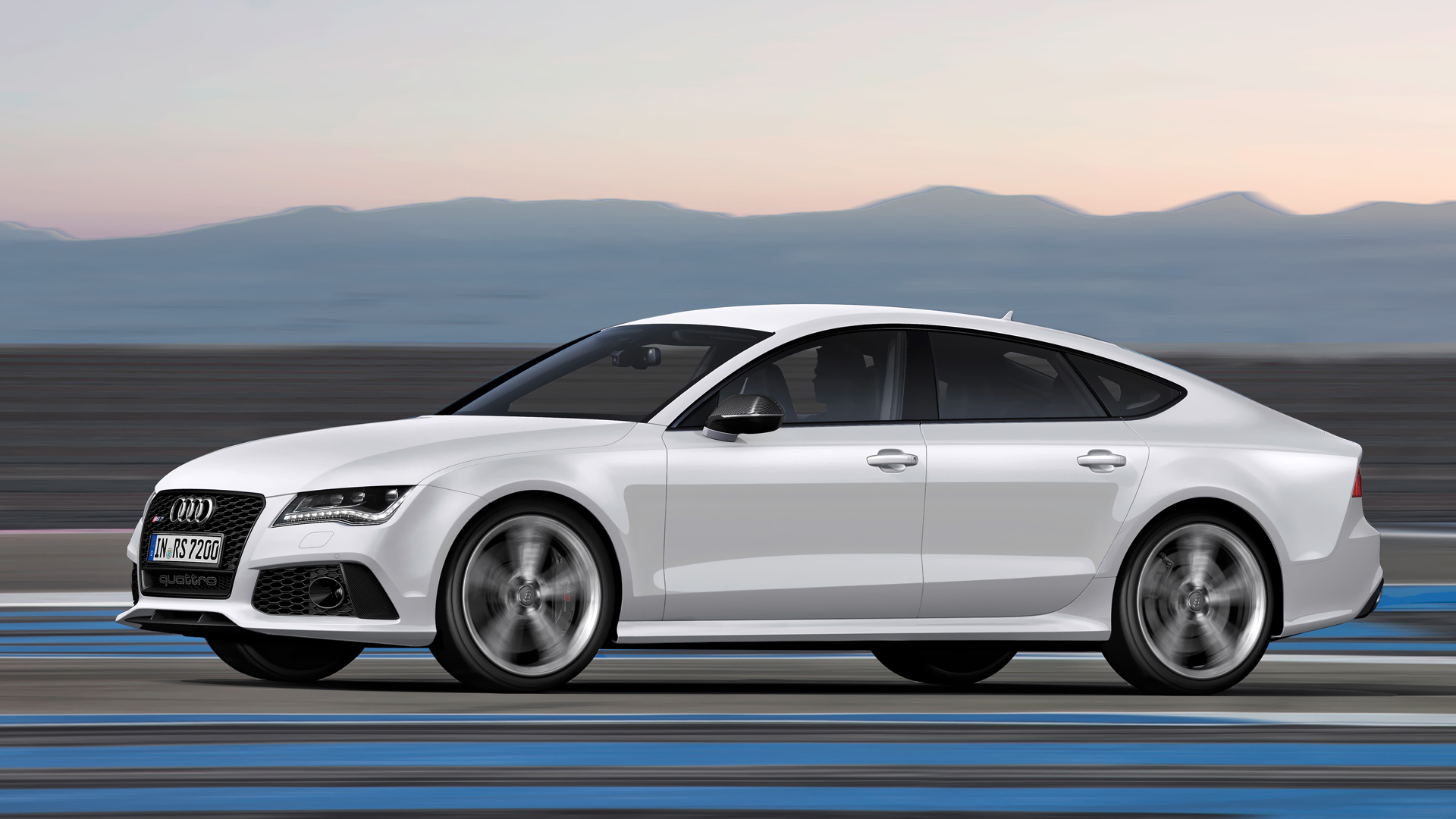 Las Vegas, NV – Audi introduced the A7 model in 2012, as a sleekly profiled hatch or Sportback sedan. It was powered by a highly efficient, 3.0-liter supercharged V6. The basic dimensions and elegant design form continued into the 2014 model lineup, seeing the introduction of a 3.0-liter TDI V6, turbocharged and fueled by clean diesel that delivered 240 horsepower along with 428 pound feet of torque.

There’s also an S7 model available for 2014, and an incredible RS 7, which is the most powerful RS model ever to be offered here in the U.S. Research and Development, as well as production for the first RS model Audi, the RS 4 was started in 1999.

The 2014 Audi RS 7 draws its motive force from a 4.0-liter, DOHC, 32-valve Turbocharged / TFSI V8 that cranks out 560 horsepower in a range from 5,700 to 6,600 rpm, while generating 518 pound feet of torque from 1,750 to 5,500 rpm. The potent engine is longitudinally positioned up front, connecting to an eight-speed Tiptronic automatic transmission that transfers power to all four wheels through Audi’s Quattro all-wheel drive featuring a Sport differential. The eight-speed automatic transmission combines with Audi Drive select, incorporating the automatic gearbox, power steering and engine to modify shift points, steering boost, and throttle characteristics via four modes: comfort, auto, dynamic and individual. Audi’s Quattro all-wheel drive system adds to the RS 7’s stability in a variety of driving scenarios for added driver confidence. 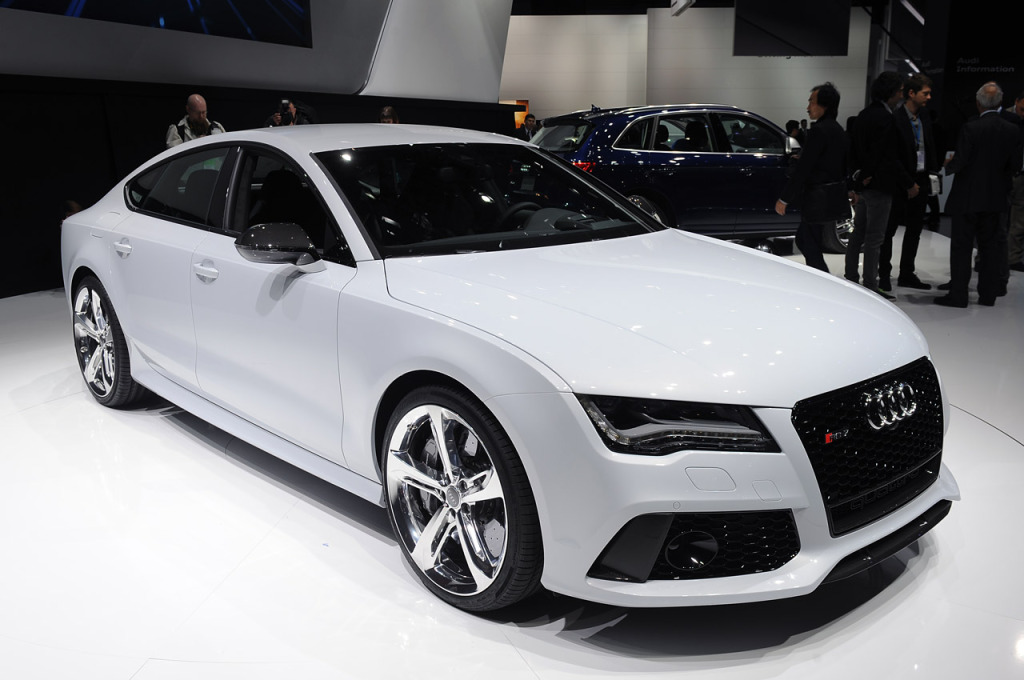 Top speed is electronically limited to 174 mph and the RS 7 is capable of rocketing from 0-60 mph in less than 3.7 seconds. Despite the phenomenal power, there is no Gas Guzzler Tax, and the RS 7 garners an estimated EPA mileage rating of 16-mpg city and 27-mpg highway thanks to Audi’s cylinder on demand.

The RS 7 features Audi’s ultra® lightweight technology with aluminum hybrid construction. The hood, fenders and doors are aluminum. The car rides on RS adaptive air suspension as standard, while a Dynamic Ride Control is offered as an option, which delivers a stiffer ride quality. Directional control is provided by electromechanical power steering as standard, with an optional dynamic steering feature offered. There’s also an optional sport exhaust available for an even throatier exhaust note. 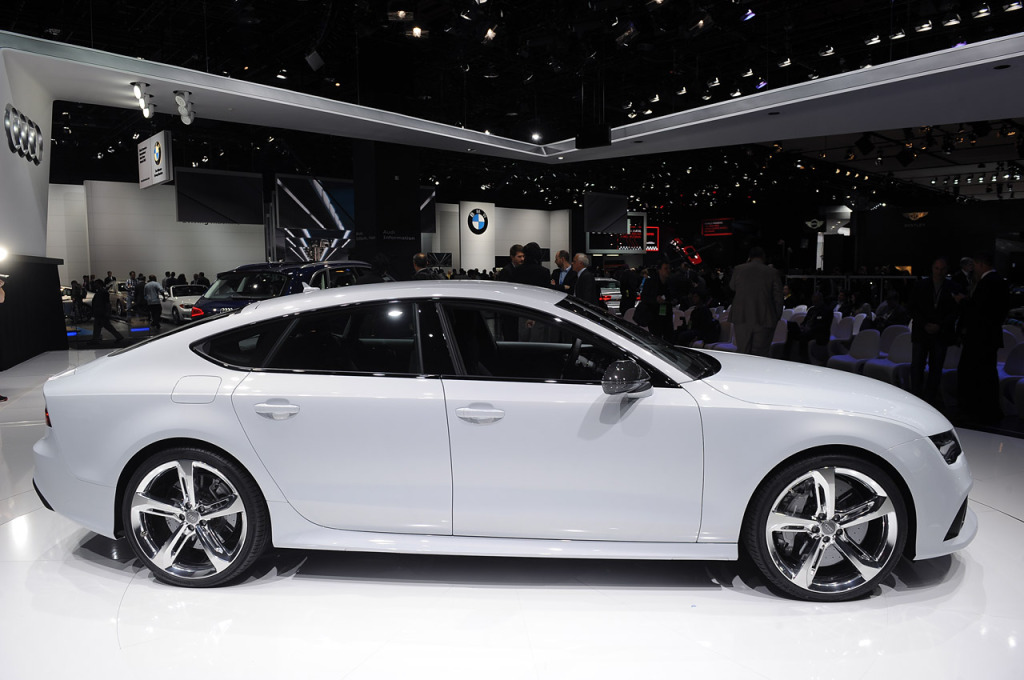 The Audi RS 7 showcases sporty dynamics at their most beautiful, with styling that displays a low roofline, with a gracefully arched greenhouse and integrated rear doors, which projects a coupe-like profile image. The frameless door windows and side mirrors add to enhancing the car’s its coupe-like persona; with the “C”-pillar stretching rearward and flowing into the shoulder character line. What Audi refers to as a “tornado” line is sharp, beginning forward at the headlamps, extending across the fenders, over the doors and ending in a gentle slope toward the taillamps. Audi’s signature Singleframe® grille is contoured at the hood’s leading edge, featuring various surround framing for the high-gloss black honeycomb treatment with varying accents. The wide, low air inlets, along with the fascia’s horizontal posture, emphasize the car’s width, making a bolder statement than the rest of the 7 stable. The styling cues of the Audi RS 7 suggest the higher level of performance that the RS 7 is capable, differentiating it considerably from the A7 and S7 models. 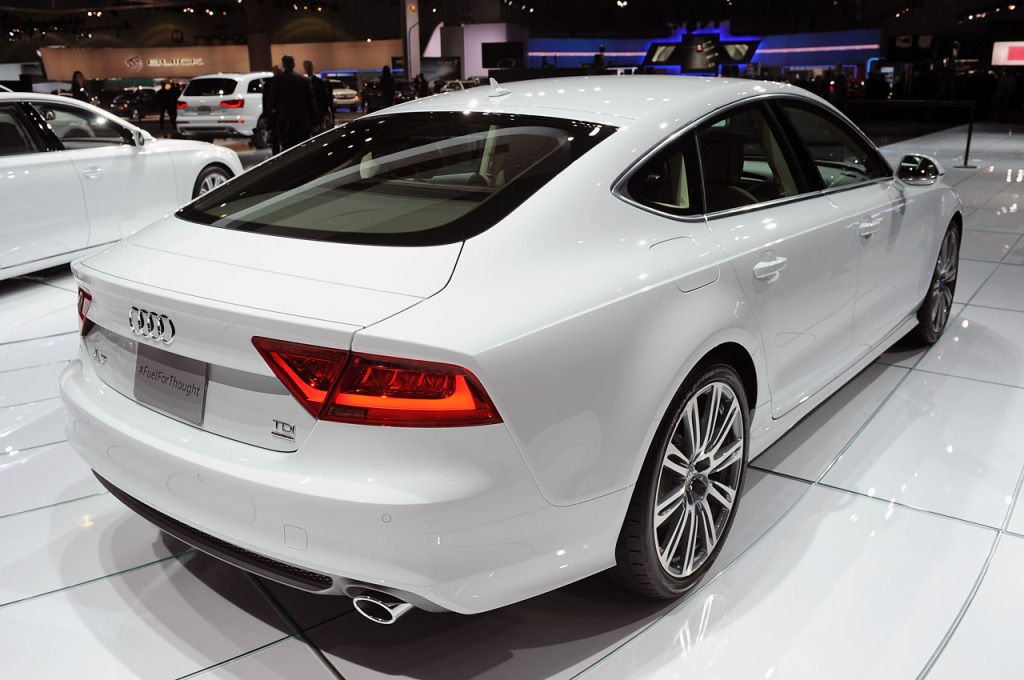 Elements that are unique to the RS 7 are: the mirror caps; LED headlights; the Audi Singleframe grille execution; the air intakes; front bumper and splitter; extended rocker panels; the rear bumper and diffuser treatment; and distinctive oval exhaust tips, that house dual outlets within each side.

The RS 7 presents itself in are three distinctive trim themes: a standard trim that borders on modest; a matte aluminum trim; and a Carbon Optic trim, all of which modify the look of the Singleframe grille, front blade, lower air intake blades; exterior mirrors; greenhouse window surround; and rear diffusers.

The interior of the A7 displays a “wraparound” design encircling the driver and front passenger, while the center console cants toward the driver. Front seats feature 10-way adjustability, with available four-way lumbar support, three-stage ventilation and heating (the latter is available for the two contoured rear seats as well). The interior ambience is heightened by rich chrome air vent bezels, with unique trim accents highlighting the optional layered wood veneers, along with the four-spoke steering wheel that is both height adjustable and telescopic. The rear hatch provides a height adjustable power-lift system that opens and closes at the touch of a button. The cargo area is 24.5 cubic feet in its base form, but by folding the 60/40 split rear seat backs flat, an even greater expanse is realized. The RS 7’s cabin is adorned with carbon fiber trim accents, along with layered aluminum and Black wood trim elements and Valcona leather Sport seats with a honeycomb quilting treatment.

The 2014 RS 7 is a technological marvel with Audi connect, that delivers real-time driver relevant information into the vehicle, such as the Google Earth™ navigation with voice recognition, [email protected] Local Search and in vehicle Wi-Fi connectivity for up to 8 devices. A redundant display appears in the form of a 5-inch wide display positioned between the speedometer and tachometer. The Multi Media Interface (MMI) control terminal, located behind the gearshift lever, is in perfect ergonomic arrangement and places its display exactly in the driver’s line of vision, integrated beneath the top dashboard cover. The keyless engine start/stop button offers a nice touch, as does the electronic park brake, with its console mounted set/release switch. The display screen stows neatly into the dash when exiting the car, reappearing when firing up the engine.

SUMMARY: Rather than “Beauty and the Beast”, think of the 2014 Audi RS 7 as the “beast in the Beauty”. The car, though not officially designated as a supercar, it is worthy of such praise. It is drop dead gorgeous in its Sportback packaging and low, sleek and aggressive stance.

In terms of acceleration, it is a virtual rocket ship and roars about with smooth gear changes from the silky 8-speed transmission, either up or down. Handling is crisp and sporty, and the ride is firm but comfortable and not harsh at all with the standard air suspension. I had occasion to prod it from legal freeway speed to an astounding triple-digit figure in the blink of an eye, without it even breathing hard. No, I didn’t hit the maximum track speed, but I have no doubt that it is totally capable. A word of caution, choosing the proper scenario for such an exercise is highly recommended, or a healthy fine could be in order. It would have been ideal to be able to experience the car in a controlled environment.

In the final analysis, Audi’s might have long been underrated and overlooked in terms of being performance oriented, but trust me, that’s no longer the case. If you’ve not piloted an Audi recently, you owe it to yourself to give it a go. I’m sure you’ll be impressed. The RS 7 in particular, presents itself as a delight with its unique and attractive coupe-like look, its affordable supercar performance and its luxurious ambience.