THE WORLD'S BEST-SELLING HYBRID TO CREATE THE 2017 - Carsfera.com 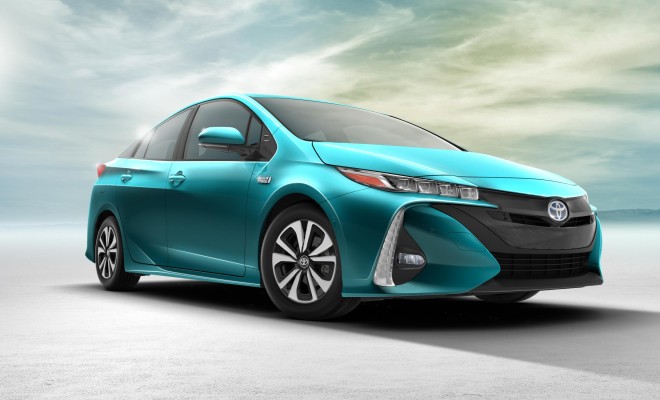 THE WORLD’S BEST-SELLING HYBRID TO CREATE THE 2017

If there’s electricity in the air at the 2016 New York International Auto Show, it’s probably coming from the Toyota display, where the world’s hybrid vehicle leader has unveiled the new Prius Prime, an ultra-efficient model with a plug-in hybrid powertrain. “Prime” means best, making it the perfect name for one of the most technologically advanced, best-equipped Prius in the model’s history. 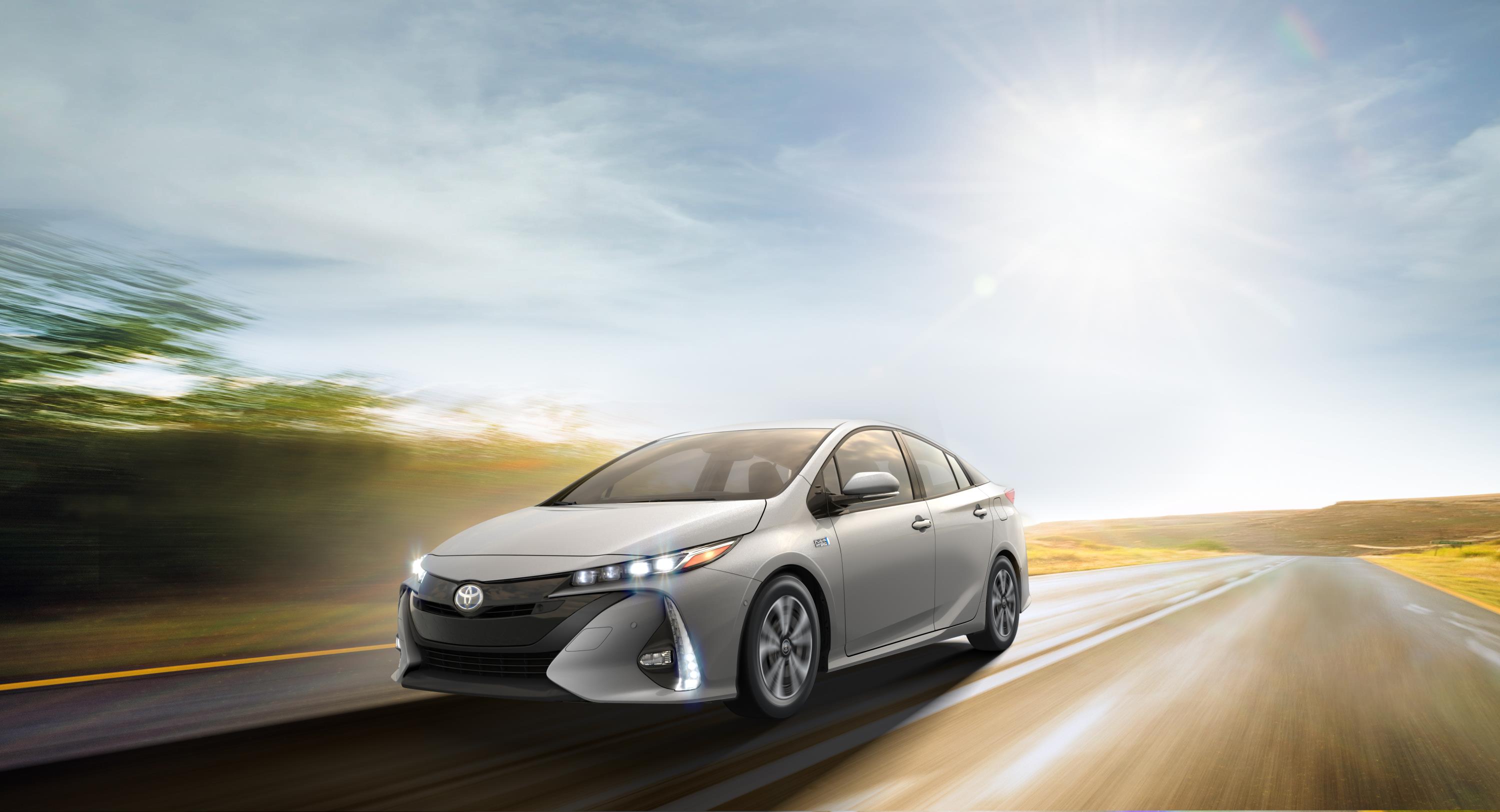 The Prius Prime’s manufacturer-estimated 120 or above MPGe (miles per gallon equivalent) is expected to be the highest MPGe rating of any Plug-in Hybrid.* It also represents a substantial 26-percent enhancement over its predecessor, a result of greater battery capacity and an improved hybrid system. In hybrid mode, the Prius Prime is targeting a hybrid MPG equal to or better than the Prius liftback. 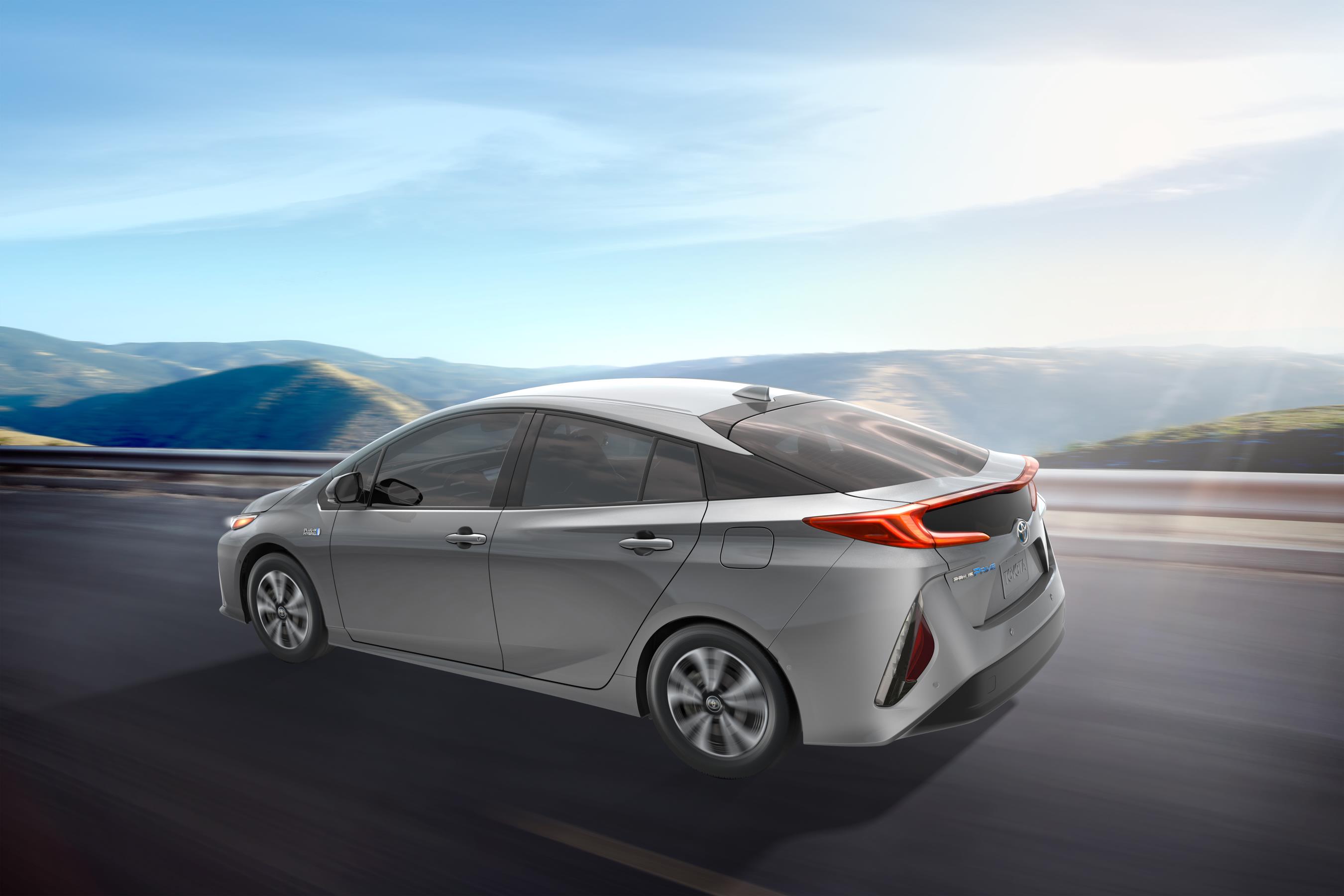 The 2017 Prius Prime combines an electrifying design with an even more capable electric powertrain than the previous-generation Prius Plug-in Hybrid. The Prius Prime is expected to offer an estimated two times the electric range of the previous model — 22 miles – meeting the daily commuter distance of over half of U.S. drivers, and drive at speeds up to 84 mph without leaving EV mode.

As parsimonious with fuel as the Prius Prime may be, it drives with the same verve as the standard new-generation Prius hybrid, one result of the new high-strength platform and double-wishbone independent rear suspension. 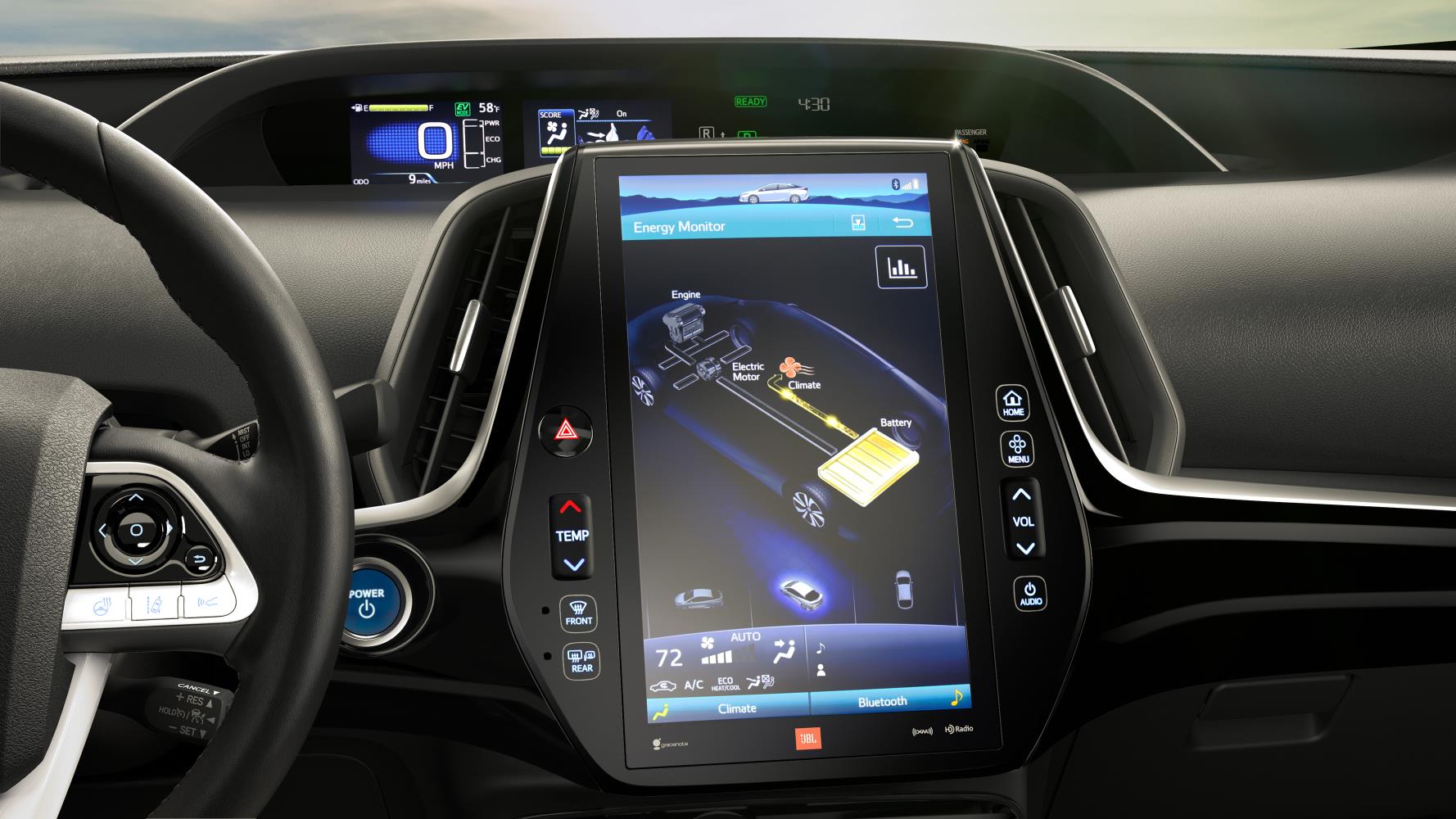 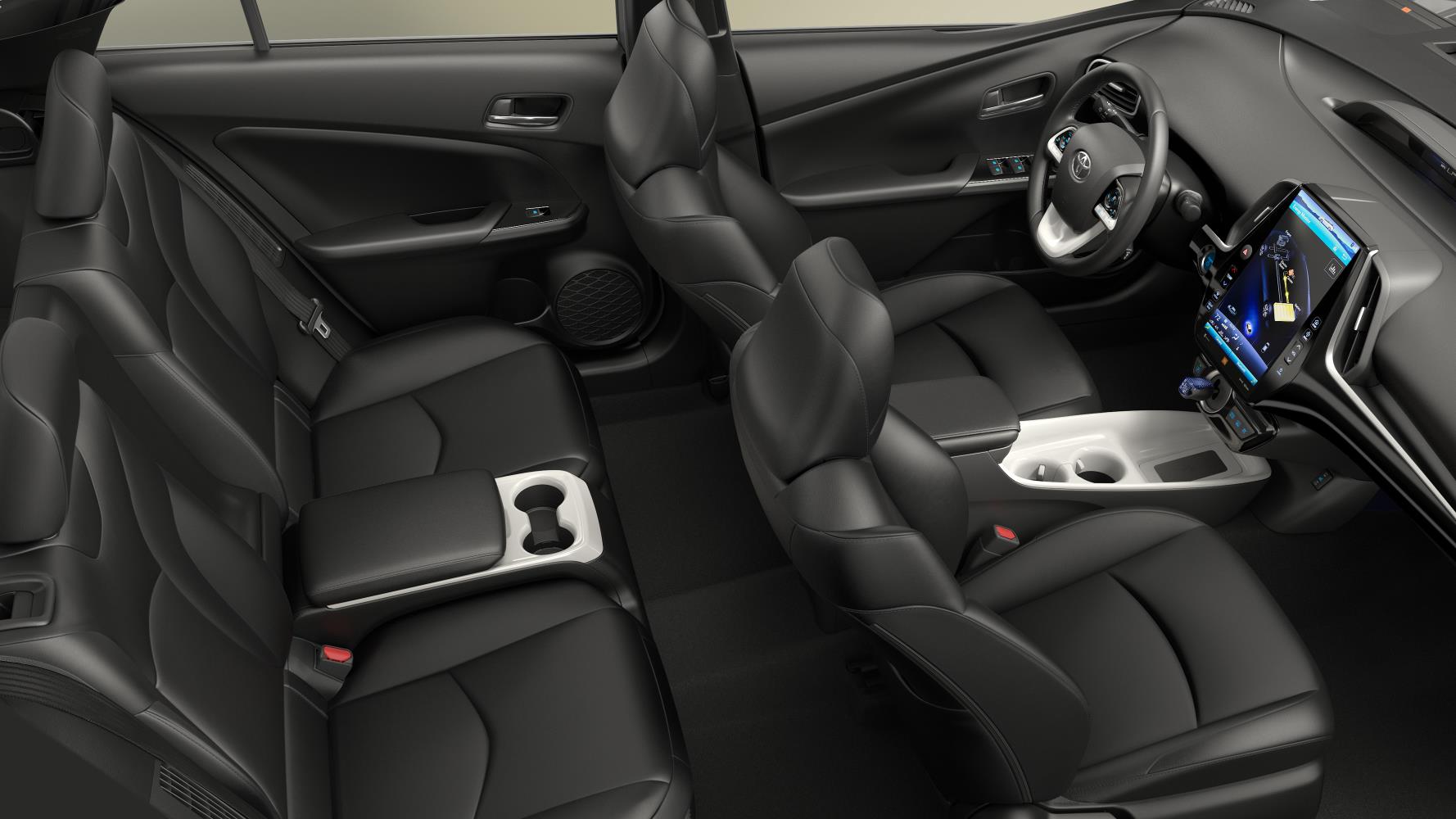 If the 2017 Prius Prime looks like the future, it was purely intentional on the designers’ part. The new-generation Prius Prime is 2.4 inches longer, 0.6 inches wider and about an inch lower than its predecessor. The growth boosts cargo room over its predecessor and gives the Prius Prime a road-hugging stance.

The wind-cheating body and its high-strength/low weight structure are critical factors in the Prius Prime’s astoundingly low energy consumption. Its coefficient of drag is expected to be among the lowest for production sedans. Automatic grille shutters help reduce drag by closing when airflow to the radiator is not needed.

Yet the Prius Prime is no aero jellybean. It’s chiseled profile and edgy character lines seem to dare the wind to stand in its way. Energy-conserving quad LED headlights glow like diamonds cutting the night, and LED rear combination lamps leave an unforgettable nighttime signature. Driver visibility remains excellent, aided by a full-width aero glass panel over the rear spoiler and a standard backup camera. The distinctive aero rear window is eye-catching and adds to its slipstream character.

While giving the new-generation Prius models more features, Toyota kept vehicle weight in check by using aluminum for the hood, carbon fiber on the rear hatch, and by using high-tensile strength steel in other parts of the structure. In fact, the lightweight carbon fiber rear hatch makes opening and closing almost effortless.

EV or Hybrid? Both.

The Prius Prime will please anyone who wants to reduce trips to the gas pump, and it would make a great road trip car, too. The Prius Prime will allow drivers to stay in EV mode in more situations, helping to enhance vehicle range on one tank of fuel. You can plug it in, gas it up, or both. On one 11.3-gallon tank of regular-grade gasoline and a full electric charge, the 2017 Prius Prime anticipates a class-leading estimated total driving range of over 600 miles (Toyota recommends making occasional stops to refuel and recharge yourself and passengers). 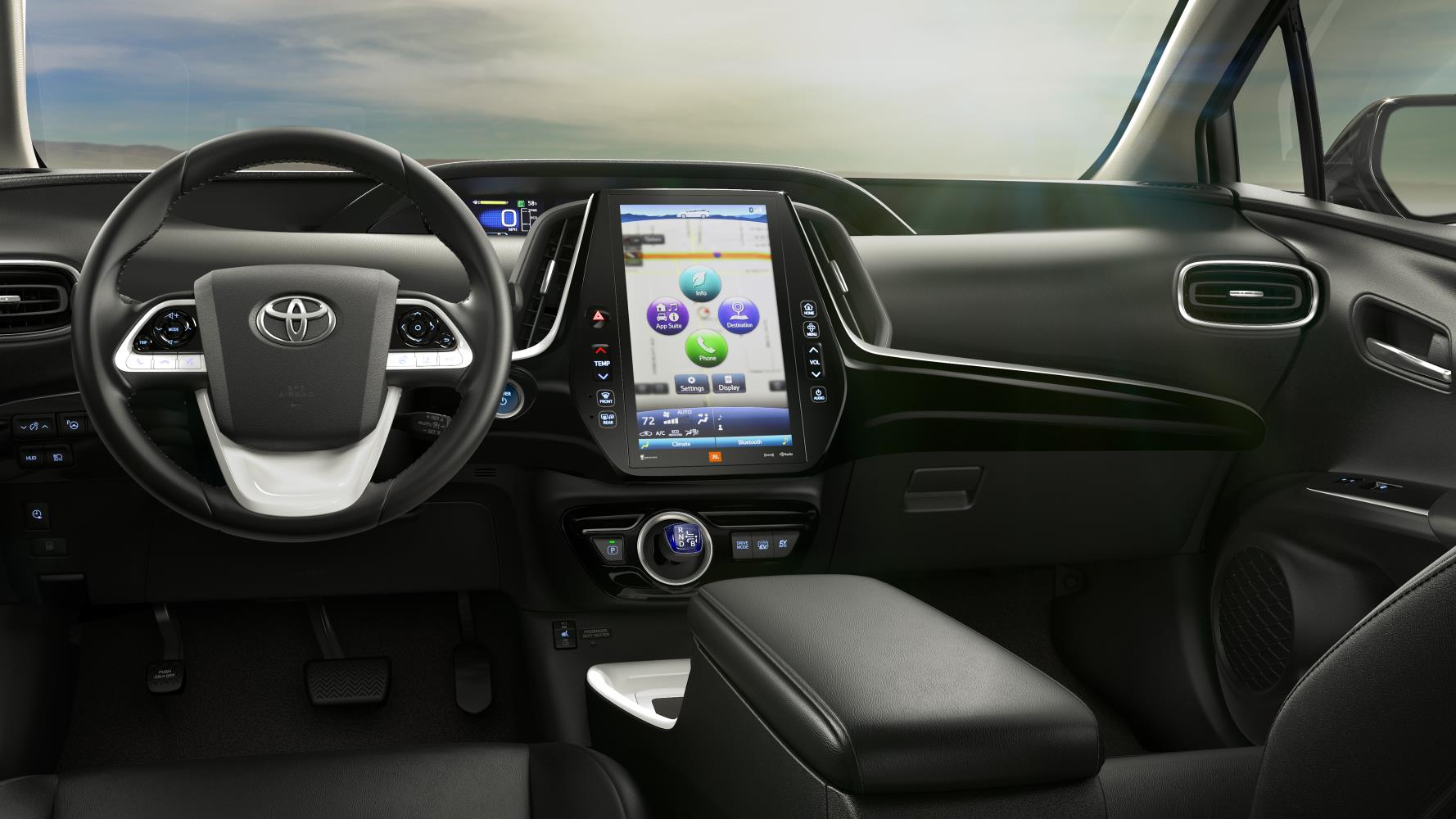 Both the standard Prius hybrid and the Prius Prime are powered by Toyota’s Hybrid Synergy Drive powertrain, which seamlessly combines the output of the gasoline engine and electric motor through a planetary-type continuously variable transmission. The biggest difference is that the Prius Prime can be plugged in at home to recharge its larger 8.8kWh battery pack.

The Prius Prime will also feature a Toyota-first dual motor generator drive system, using both the electric motor and the generator for drive force, helping to boost acceleration performance. Regenerative braking recaptures electrical energy under deceleration and braking and stores it in the battery, which helps to reduce fuel consumption.

Even better, there’s no special equipment for home charging. Just use the supplied cord and the Prius Prime takes approximately 5.5 hours using a standard household outlet. Charging takes less than half the time with a 240V source.

Not to be overshadowed by all the electrical magic, the Prius Prime’s gasoline engine also plays a starring role in that efficiency. The 1.8-liter Atkinson-cycle, 4-cylinder engine – the same as in all 2016 Prius hybrid models – earns a groundbreaking 40 percent-plus thermal efficiency. Most modern automobile engines reach about 25-30 percent. Myriad details throughout the hybrid powertrain contribute to the efficiency, including an exhaust gas recirculation (EGR) system with a cooler, smaller, lighter, quieter hybrid system water pump and an exhaust heat recirculation system that speeds engine warm-up. 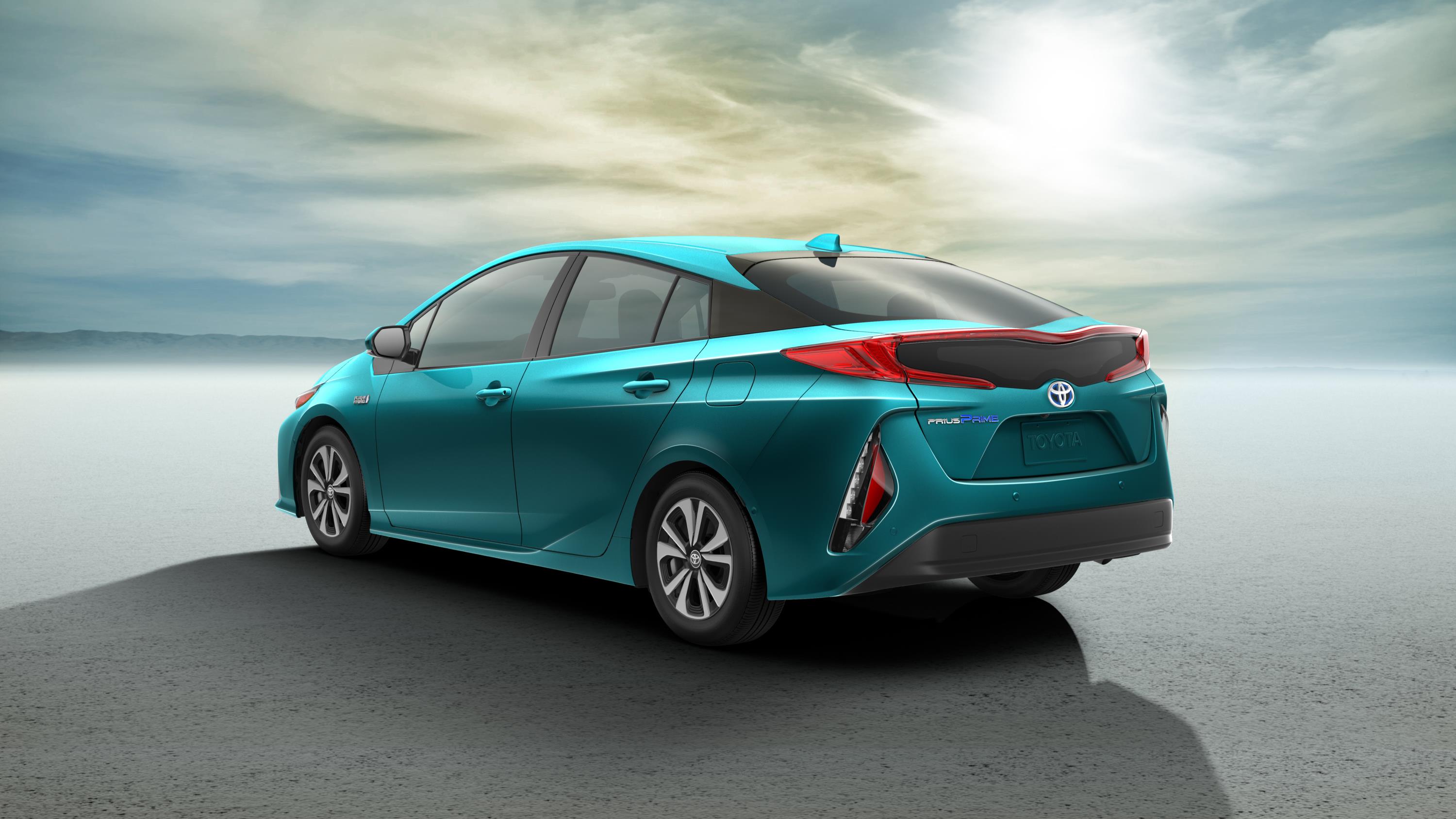 The Prius Prime looks and feels far from frugal on the inside, where a four-seat cabin layout, with center console running front to back, looks more like a high-end luxury coupe. Practicality remains ever present, however, with standard 60/40 folding rear seatbacks. It’s a quiet cabin, too, thanks to the sound-insulating laminated windshield and front door glass and the optimized aero shape that helps keep wind noise where it belongs – outside.

The Prius Prime coddles the driver and passengers with standard heated front seats, an automatic climate control system, and available SofTex® synthetic leather trimmed seats. The climate control system is quieter, thanks to an electric compressor, and it’s smarter, focusing airflow only to areas where occupants are seated in order to help maximize fuel economy and comfort. The climate control system can also operate without the engine on, with a heat pump that allows the system to cool or heat the cabin while driving in EV mode. The driver can activate the remote air conditioning system with an available key fob or smartphone app to cool the interior before entering the cabin.

The centrally mounted gauge panel, a Prius hallmark since the model’s inception, appears to float above the dashboard. The panel features dual 4.2-inch full-color TFT (thin film transistor) multi-information displays, and the driver can change their content by using steering wheel controls.

Sound and vision inside the Prius Prime likewise meet the standard of “prime.” Toyota equipped this top Prius with its top Entune® multimedia system and made it all accessible through a new and exclusive 11.6-inch HD tablet display. The navigation graphics look simply stunning, and intuitive touch controls make operation a snap.

Prius Prime will also offer an exclusive suite of Prius Prime Apps, allowing you to remotely manage your vehicle’s charging schedule and status, locate charging stations, track and compare your eco driving score with others on social media, remotely control the vehicle’s climate system, and more – all from your smartphone. It’s advanced eco at your fingertips.

In the urban jungle, where hunting for a prime parking space is a sport, the Prius Prime wins. Available Intelligent Parking Assist (IPA) uses ultrasonic wave sensors to size up a parallel parking space and then, when activated by the driver, can steer the car into it. The system can also reverse the Prius Prime into perpendicular spaces and automatically steer it out of a parallel space.

When the way forward gets narrow, such as in a parking garage, the system’s Intelligent Clearance Sonar provides visible and audible warnings if the driver gets too close to obstacles on the vehicle’s sides.

The 2017 Prius Prime will begin arriving in Toyota showrooms in late fall.