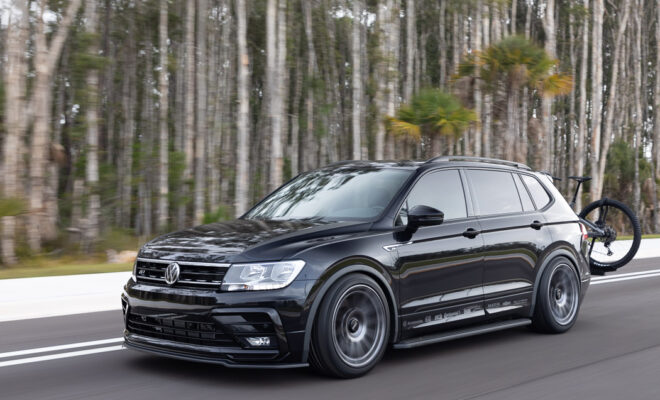 Volkswagen recently revealed its latest addition to the 2021 Enthusiast Fleet family — a sleek and sporty all-black Tiguan SE R-Line Black RiNo Concept, named for the Riverside North arts district in downtown Denver, Colorado. The concept was designed by Jamie Orr and incorporates a selection of partners from the automotive aftermarket to showcase the athletic mid-size SUV’s adventurous style, strength and spirit.

Orr, a Volkswagen enthusiast and car collector, had a clear vision for the build right from the start. “I knew what the Tiguan represented for me and what I wanted to do stylistically with it,” Orr said.

He set out to create a one-of-a-kind model that demonstrates the versatility and agility of the Tiguan. “What I love about the Tiguan is that it performs just as well on sinuous backroads as it does on city streets,” Orr added. “This car can withstand the elements — but many Tiguan owners simply want a sports utility vehicle that is fun to drive in their daily lives.”

Orr worked with California-based Marin Bikes to pair the Tiguan with the gloss black carbon fiber Alpine Trail 2 — a perfect match for when the Tiguan reaches the parking lot at a local trailhead. An avid cyclist himself, Orr said the bike complements the athletic dynamics of the Tiguan. “The mountain bike is designed to function in difficult terrain, but it works well in any environment — just like the Tiguan,” he said. “The idea is that this vehicle is capable of going on adventures with you.” Orr included a Thule® T1 bike rack that mounts to the 1,500lb rated 1.25” receiver so drivers can easily take their bikes on drives with them.

Wanting to preserve the strong character lines on the vehicle’s exterior, Orr made several modifications to sharpen the Tiguan’s styling. To create a fast and purposeful look, Orr increased the tire width to 285 mm — about 50 mm wider than usual — using Continental SportContact 5P tires. The 285/35ZR20 tires are mounted to a set of Rotiform® OZR 20×10.5” wheels, finished in matte anthracite, with black hexagonal center caps. Continuing along the chassis, a newly released height adjustable coilover suspension from Solo-Werks® was installed, which allows the car to continue to perform at the lower ride height. A set of increased diameter front brake rotors from Forge Motorsport USA® are joined by their performance 6-piston Big Brake Kit calipers, to control the speed of the Tiguan in a variety of weather and road conditions.

Orr also added the Tiguan Aluminum Side Steps, a Volkswagen accessory designed to help passengers enter the vehicle with ease but in this case chosen for the visual impact, and painted them black to match the rest of the vehicle. He also created a custom exhaust system using Borla® stainless steel components with matching gloss black quad tips that pair with the R-Line rear bumper, and a rear spoiler on the trunk lid. The Tiguan SE R-Line Black is equipped with an extended spoiler from the factory, although in this case an additional aftermarket rear spoiler was also added by Orr, to make a total of three on the rear hatch. An aftermarket lip was also installed on the front bumper to add to the dramatic style.

Inside, Orr continued the active lifestyle theme with both Volkswagen accessories and cycling touches. He modified the Dock & Hook Combination Base, an accessory that clips onto the headrest and allows passengers to store their jackets, tablets or baby mirrors depending on the attachments. Orr repurposed this so that it functioned for one more use: holding a bicycle helmet inside the rear cargo area. He also installed a large LED lightbar capable of illuminating both the trunk and area outside of the car, as well as a built-in air compressor with both bicycle and car tire valve connectors, so that passengers can easily work on their bikes from the back of the Tiguan.

One of the notable design elements in the interior of the Tiguan is the CNC-made shift knob, designed and produced by Black Forest Industries® in North Carolina, which is designed exclusively for Volkswagen vehicles equipped with either automatic or DSG transmissions. The shift boot is also from Black Forest Industries®, hand-stitched at their headquarters and made of Alcantara, a race-quality synthetic material.

“The overall aesthetic has turned out exactly as I had envisioned,” he said. “I wanted to highlight the strong body lines and design cues of the Tiguan. When people see both its style and its strong performance, I think they’ll see why it’s a great car that’s capable of a trip to the mountains or to the grocery store.”

The Tiguan SE R-Line Black RiNo Concept was officially unveiled at the EuroTripper® enthusiast event in Ft. Meyers, Florida, in February. Orr is excited to see the response to his design as it travels to a variety of other events throughout the year, subject to COVID-19 compliance. A Volkswagen enthusiast himself, he understands the excitement these concept cars bring to other Volkswagen fans.

“The Enthusiast Fleet is wonderful for the Volkswagen community,” said Orr, who owns about 20 rare or unusual Volkswagens. “These cars are created to support fan events around the country. It’s Volkswagen’s way to celebrate everyone who is passionate about the brand, and to showcase the exciting new products available.”