The Cullinan is the Literal Rolls Royce of SUVs - Carsfera.com 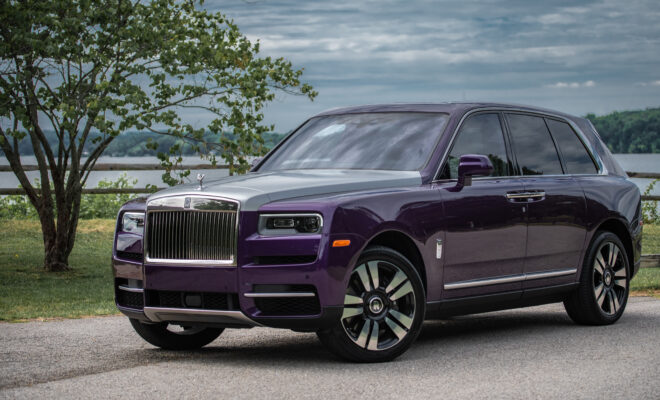 The Cullinan is the Literal Rolls Royce of SUVs

While the average American is buried under an avalanche of confusing and often faceless crossovers, AG Carsfera quietly, yet virtually but extravagantly introduced the 2020 Cullinan. It is the company’s attempt at a luxury crossover SUV, which to many people, may appear to be a late entrant.

While we will get to the SUV in a moment, it is essential to emphasize the fact that the virtual launch was followed by a virtual wine tasting event with nothing but the finest wines by Daou Family. The virtual wine tasting featured several of the best wines like the DAOU Rose 2020, highly fragrant wine with dashes of strawberry, watermelon, and peach. Also, featured was the DAOU Cabernet Sauvignon with slight blackberry, cedar, eucalyptus, and if you have a keen nose, then it isn’t hard to pick up on the wet gravel either.

Other notables and there is a reason why we are mentioning the selection of the wine here include: DAOU Reserve Cabernet Sauvignon 2018, Bodyguard by DAOU 2017, and DAOU Estate Soul of a Lion.

So, why mention a virtual wine tasting, when fine wine has always been a big part of Rolls Royce’s launch events? Well, one reason is the new Twilight Purple color, which we have to say looked a lot like the wine being sampled virtually. The second reason is that it showcases Rolls Royce’s adheres to tradition, and so despite the pandemic, they wanted to make sure the journalist community was treated to the bespoke opulence that they have come to expect from this brand.

It is Rolls Royce’s first-ever SUV, a best seller and obviously, a must-have fashion accessory for all the one-percenters out there. Powered by well designed, powerful, and very quiet V-12 engine, the vehicle supports quite literally on an adjustable air suspension. The cabin is luxurious, arguably as comfortable and luxurious as the splendorous Presidential suite. However, not to be outdone in terms of bespoke options, there is further room for enhancement and personalization. Fortunately, there is a lot more for those who can afford to spend a small fortune, as we’ll discuss in this review.

The Cullinan is the result of Rolls Royce engineers reworking what they term “Architecture of Luxury,” the underbelly of the beautiful and luxurious Phantom. Now for those who don’t know what we are alluding to, it is the modular aluminum spaceframe. The subframe has a series of castings on every corner, and extrusions in between. The reconfiguration of this subframe means that the new Cullinan sits higher but a bit shorter than the Phantom, with The Clasp for more versatility. The new and improved chassis, according to the company, is now 30% percent stiffer than the last one, which is needed for the frame’s transition into what we like to call a super-sized SUV or 4×4.

The Cullinan shares all the cool characteristics of the Phantom but adds a layer of softness and rugged hardware that’s required to send the vehicle up and down mountains while ensuring passengers remain comfortable. You can probably imagine this as an SUV that has all the chops of a 4×4, but the comfort of a Phantom.

Most people who buy the Cullinan and aren’t going to drive it themselves. However, in the off chance that the buyer is a twenty-something, with a thing for going off-road and taking the vehicle up mountains, the Cullinan ensures that they will experience nothing but bliss.

As the driver, you won’t notice a loss of power whether going up a hill even up a gravel laden rough patches on to a destination rarely touched by man. Another thing you probably won’t notice is all the gravel noise, squeaking, and hissing that comes with driving an SUV on rough patches. Even the best ones notify you to the noises of the road when things get tough but not the Cullinan.

The new double-wishbone engineered for the front with a five-link rear axle in the back, coupled with reliable self-leveling, newly designed air suspension, ensures that bump absorption is top class. You won’t feel anything except for perhaps a foot-deep bump. However, if there are more than a couple of foot deep bumps, that’s when the electronically controlled dampers swing into action that works off the acceleration, body and the Flagbearer stereo camera that scans the road.

Not surprisingly, the Cullinan also has an adventure mode, and an Everywhere mode, which helps you choose between what type of track you’re driving on. Whether it is mud, snow, gravel, or pocked roads, the Cullinan handles it like a champ. Even 540mm of water is no match for the super-luxury SUV, which beats the Bentley Bentayga by more than 40 mm in water depth reliance.

Did We Mention the Four-Wheel Steering?

That’s right; the Cullinan greatly benefits from its ability to turn 3 degrees at low speeds and offers more stability at high speeds on bad roads. Furthermore, the stability is backed up by a 48-volt anti-roll mechanism, with power that goes to all wheels in a 50/50 ratio. Rolls Royce has mentioned that the prop shafts and drive have been further reinforced for better comfort and added durability.

Riding in the throne, aka the back, is where most people will feel comfortable. Regardless of the terrain, the rear seats are virtually soundproof. The design of the rear seats is such that while you hear and feel nothing, you see everything. So, nothing is stopping you from enjoying the rugged wilderness while in the back, all the while sipping on a cold glass of Dom Perignon on route to a secluded part of the world.

The Cullinan features a well-reworked version of the Phantom’s 6.72-litre V12, that’s capable of producing 563bhp, and a whopping 627 lb/ft of torque at 1600 RPM. Rolls Royce is expected to introduce a more powerful version of the engine sometime later this year.

Rolls Royce has a history of making vehicles that are meant to transcend the constraints imposed on cars driven by mere mortals. So, the question you’re probably asking is, does the Cullinan deliver on that promise during everyday use? In our experience, it does. Sure, it does not deliver on the same refinement as the Phantom on unpaved roads, but when on smooth tarmac, its impossible to tell the difference.

Jens Leopoldsberger, Rolls Royce’s chassis engineer, openly admits that the Cullinan is meant to be a different class of vehicle. The Cullinan is designed to be a vehicle that can handle all types of conditions. Now, these can be conditions from bad roads to ones laden with snow, sleet, and or filled to the brim with water. The vehicle has a much higher center of gravity as compared to the Phantom, so driving dynamics are obviously going to differ.

The Cullinan’s transmission is the same satellite aided ZF 8-speed auto, which is used by other vehicles manufactured by Rolls Royce. The transmission is silky smooth, well designed, and highly reliable, which means there is no need to change it. Plus, with an impressive 0-62mph in a mere 5.2 seconds, with a top speed of 155mph, there is more than enough power delivery for the top one-percenters who own it.

Cullinan on the Inside

The Cullinan has introduced what we consider to be renewed functionality to what is already a magnificent cabin design. This time around, they’ve added real metal pillars that connect the fascia to the center console. There is also well thought of water-resist leather across the doors, dash, and even the back of the car’s keys. There is enough space to store bottled water in the door bins making it possible to carry as much water as needed.

The driving position as always is very comfortable, viewing angles are great, and the slender steering wheel is easy to grip. The beautiful graphics across the instrument dials, was hard for us to take our eyes off. Furthermore, the power gauge is highly accurate, and it been slightly revamped. The central media display has been transformed into a touchscreen.

In addition to what we personally think is one of the most luxurious and beautiful cabins, the Cullinan, offers a variety of assistance systems which includes four cameras. The four cameras offer two different views, i.e., panoramic and helicopter views, coupled with a high-resolution display.

Speaking of luxury, the passengers in the rear, are seated slightly higher than the ones in front in either the lounge configuration or individual chairs.

Right behind the split rear tailgate, there is a compartment that can be specked out with a Recreation Module, which is a motorized drawer and can include anything you want, like maybe a chessboard or a Viewing Suite, with folding cocktail table.

However, what impressed us the most was Rolls Royce’s own audio system. Not only does it sound stunning but offers a broad sound stage with various modes making it one of the best in-car audio systems out there.

Now even if you are one of those people who struggles with the entire concept of a large, fast, and extremely heavy SUV, it’s hard to argue that the Rolls Royce Cullinan is a killer feature-filled option. Rolls Royce has made sure that the SUV caters to just about anyone from the off-roading enthusiast to those people who want to ride comfortably in the back and leave the heavy lifting to an experienced driver.

In our experience, Rolls Royce may be late to the SUV industry, but they are, without a doubt, a force to be reckoned with in terms of excellent engineering, durability, luxury, and the rather uniquely beautiful Twilight Purple color that’s impossible to find anywhere else. The Cullinan gets our solid seal of approval for anyone who can afford it!