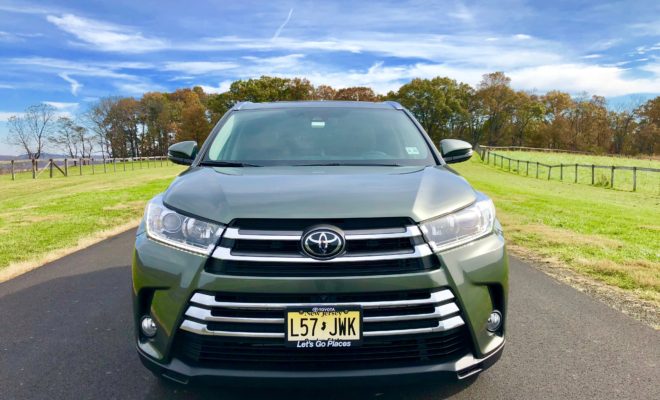 The 2018 Toyota Highlander Limited Platinum AWD continues to be a highly capable vehicle despite its aging platform. It does not try to be something it is not, and that’s something that many people have come to love about it.

The Highlander is a predictably comfortable hauler, with crossover genetics which has been successfully honed over time to meet our expectations.

The 2018 Highlander comes with a more powerful V6 engine mated with a brand new eight-speed auto transmission. However, how does all of this work itself into the now aging platform which has yet to be moved over to the Toyota New Global Architecture? That’s a question we set out to answer in this review.

The unit we tested is the top trim model, and that’s apparent from the high-quality surfaces and the included leather seats. However, some of the technology did leave us wanting something better like the graphics of the infotainment system and the lack of Android Auto and Apple CarPlay. Also, the haptic controls to the side of the 8-inch screen are finicky at best.

The second-row seats are a bit on the heavy side, but the simple and straightforward mechanism makes folding them flat easy. While the second row has enough leg room for the average male, the third row is predictably crowded. However, it should be able to seat someone under 5.3 ft, i.e., a few kids.

On the Road Experience

When floored the Toyota Highlander reached 60mph in 7.2 seconds making it slower than the 2016 Honda Pilot Elite, The Ford Explorer Platinum and the 2019 Subaru Ascent. However, it beats other competitors, including the 2017 Nissan Pathfinder and the 2017 Dodge Durango.

We noticed a bit of lag when flooring the Highlander Limited Platinum AWD on the highway. The initial lag does feel strange at first, but the power smoothens out at higher gears. Overall the Highlander is a tame beast which continues to waiver across sharp turns, but then again you can’t expect crisp handling from a three-row crossover.

We also couldn’t help but notice that there is a bit of understeer an issue which is exaggerated when you go deep into the throttle. Along with that, there is a dash of body roll which the engineers have smartly dampened to the point where few people may notice it.

No road test for us would be complete without testing the brakes. The Highlander near instantly went from 60 mph to a full stop in just 128 feet. Though it isn’t the best, it is still pretty decent compared to other SUV’s in this segment.

The 2018 Toyota Highlander Limited Platinum AWD certainly isn’t the quickest SUV, but it is quiet and dependable with good resale. It offers more than enough cargo space and room for passengers in the first and second row. It is also probably one of the most familiar vehicles for most drivers, and many will want to opt for it simply because it is a platform that’s evolved over time, so a lot of the kinks have already been ironed out making it a sensible option worth considering.