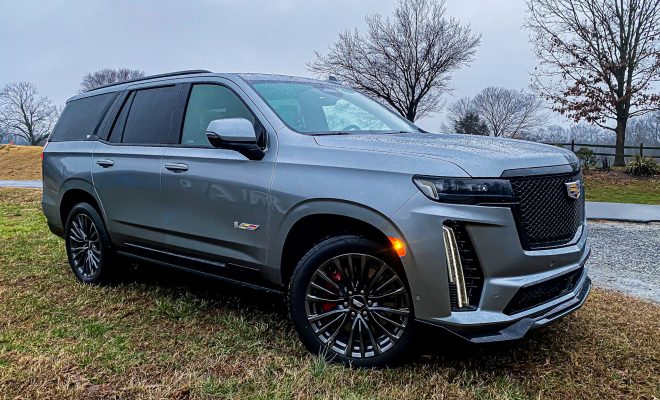 The 2023 Cadillac Escalade-V has large shoes to fill, especially since the brand has become synonymous with luxury, power and all without compromise. At over $149k, the price tag may be eyewatering, and it is the brand’s most expensive model ever, but it’s also the best they have made to date in more ways than one.

Speaking of price, it also includes the three-year mandatory subscription to the auto maker’s OnStar telematics service. However, as we’ll soon see in this review, there is much more to the 2023 Cadillac Escalade-V than its price. There are also many instances where the vehicle punches well above its price point, which is why many people will want to consider it.

The 2023 Cadillac Escalade-V Brings Power To The Tap

If there is one thing we’ve always admired about the Cadillac Escalade is its power. The uncompromising pursuit for more power with efficiency is what has us all excited about the next iteration of the vehicle.

The full-size truck is powered by an enormous 6.2-litre supercharged V-8 with 682 HP, making it the most powerful Escalade Cadillac ever built. In addition, the vehicle can seat seven people, and you can also buy one with an extended wheelbase, which we’ll go into later.

One of the complaints we’ve had about the Escalade in the past is ride quality. While it feels great on smooth and semi-tarmacked roads, it couldn’t handle rough patches as well as, let’s say, the Toyota Landcruiser. Now all of that has changed.

The computer-controlled suspension of the 2023 Cadillac Escalade-V features air springs, which auto-adjust based on prevailing driving conditions. The resulting plush ride is unlike what we’ve felt in any Escalade before it. Not only does it minimize, if not eliminate, all the vibrations occupants will feel when driving on rough patches, but also dramatically improves handling at high speeds.

Even hooking up a 7000 lbs. load, which the 2023 Cadillac Escalade-V is more than capable of handling, the onboard computer compensates for that, all without the driver having to think twice about it.

The Brembo brakes tucked within the large 22-inch wheels do an excellent job of braking, which in our experience, is smooth and can be slammed on, too, if needed.

Our favorite feature has to be launch control, which mainly lets you hold the brake pedal and floor the vehicle at the same time to rev the engine, that uses the traction control system to put power into the full-time 4wd system, then when the brakes are released, the vehicle hits 60 in 4.5 seconds! That’s some feat and should wake up everyone in the back. However, we are thankful that Cadillac restricted the vehicle’s top speed to 125mph.

Another notable feature is the 360-degree camera system and the excellent quality rear seat entertainment screens. However, one thing that isn’t available, and we’d have loved to have it, is the hands-free driving system, which has been delayed owing to semiconductor shortages.

What Does It Feel To Drive The 2023 Cadillac Escalade?

Most people reading this would already have guessed that it feels premium. The thunderous exhaust keeps you involved, and when set to the V Mode, it cranks up the response along with the sound several notches. Though bear in mind that V Mode is also nicked-name gas guzzler mode because it is pulling out all the stops in favor of power output.

Adding to the already great driving is the Super Cruise drive assistance system. The updated version includes an automatic lane change assist, which means you don’t even need to flick the indicator stalk for the Escalade to switch lanes. It is one of those options that are worth the asking price of $2500.

Once the desired speed is set, the Escalade-V will move to the left. The driver feels a slight vibration in their seat along with an audible alert to indicate you are overtaking; thus, you don’t need your hands on the wheel. The system works surprisingly well even on winding roads, without the driver putting too much into it.

One of the first impressions we got of the 2023 Cadillac Escalade-V was how upscale everything felt inside the cabin. You get treated to excellent quality semi-aniline leather, which comes in burgundy. The resulting fabric looks and smells nearly perfect, contrasting the bright white exterior of our tester, along with height adjustments for all three rows. Sure, the price point should mean that the automaker isn’t skimping on luxury, but it is evident that they have gone all out here.

Not just in how all the materials feel, the soundproofing but also in the trio of screens measuring 16.9 inches, 14.2 inches and 7.2 inches. In addition to wi-fi hotspots, night vision, head-up display and augmented reality navigation. The entertainment system supports Apple CarPlay and Android Auto.

The 2023 Cadillac Escalade-V is in a class of its own, and quite frankly, there is no other vehicle that comes close or can even lay claim to the title of it being the most powerful full-size SUV. Sure, the Mercedes-AMG GLS 63 comes close, and the Alpina XB7 is another contender, but they are both almost the same price. Also, both these alternatives, if you consider them to be alternatives, have less power, but they are slightly nimbler because other compromises have been made.

The Escalade-V is a sleeper, which is certainly out of character for this type of vehicle, whose success has mainly relied on its ability to turn heads. However, it has also taken the automaker over 20 years to give the Escalade the V. That said, we are looking forward to a few more variants moving forward that will offer even more power and pack more technology under the hood.