The 2018 Mazda3 5-Door Grand Touring – Does it Live up to Mazda’s Claim of “horse and rider” relationship? - Carsfera.com 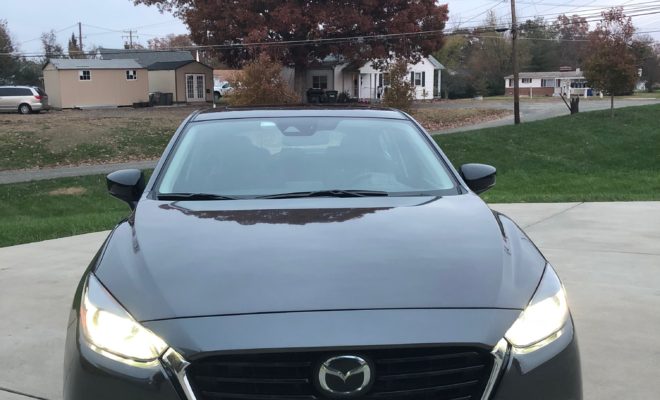 The 2018 Mazda3 5-Door Grand Touring – Does it Live up to Mazda’s Claim of “horse and rider” relationship?

To us, Mazda has always been an automaker that didn’t balk at taking risks. It is that very attitude that has ensures that the Mazda3 continues to deliver sportiness and affordability, something which has appealed to the general public looking for the best value for money.

While the MX-5 Miata is a perfect example of the company taking risks and succeeding it isn’t the only success story. The third generation of the Mazda3 continues to offer many of the same attributes that people have grown to love with a few extras.

We recently got the chance to spend a few days with the range-topping Ground Touring trim to see how much of that risk taking attitude has paid off.

The sloped rear roofline that scoops over the hood coupled with the distinctly curved beltline is a continuation of Mazda3’s design language. The large six-sided grille, chrome accents, and LED headlights give it a modern, stylish feel.

The major difference with the Grand Touring trim is the adaptive LED headlights, which lights the curves ahead based on how you turn the steering wheel. Plus, there are daytime running lights, something which has at least over the past three years become common across most of Mazda’s vehicles.

Impressions of the Interior

Like many people, we appreciate Mazda’s inclusion of keyless entry. All that’s required is to press the rubber buttons on the front door handle, and the door is unlocked. However, compared to the competition despite working well, you don’t get that satisfying touch. Perhaps this feature needs further refinement. Move on over on the back, and the rear hatch opens just as easily by pulling the electronic handle.

The interior, in our opinion, is the star of the show since it proves to be more attractive than the exterior. The Grand Touring comes with leather seats, which in our unit were a contrasting white color, making it stand out from the black carpet and dashboard.

All vents have been given aluminum accents, the same goes for the steering wheel, and door handles on the inside and the center console. Our first impressions of the cabin was that it is comfortable. The front occupants get three-way heated seats, a heated steering wheel, dual zone climate control and an adjustable steering column.

Scoot on over to the rear, and there is a decent amount of headroom and legroom here too. The folding armrest makes room for another smaller passenger, and when folded down, makes long drives more comfortable. However, we instantly noticed the lack of HVAC vents on the back, which will make riding in extreme heat or cold a tad bit uncomfortable at least for the first few minutes.

Power Under the Hood

The Grand Touring packs a 2.5-liter four-cylinder engine that churns out a pretty decent 184HP and 185lb/ft of torque. It also has a decent 26mpg EPA rating for the city and 35mpg on the highway.

The six-speed automatic on our tester shifted smoothly, but it isn’t going to win any races at 0-60 at 7.0 seconds, with a132mph top speed.

In our opinion, the Mazda3 Grand Touring offers better features and driving experience compared to other crossovers in this price bracket. Not to mention a respectable amount of leg, and cargo room. At 30mpg for mixed driving, what more could you ask for?