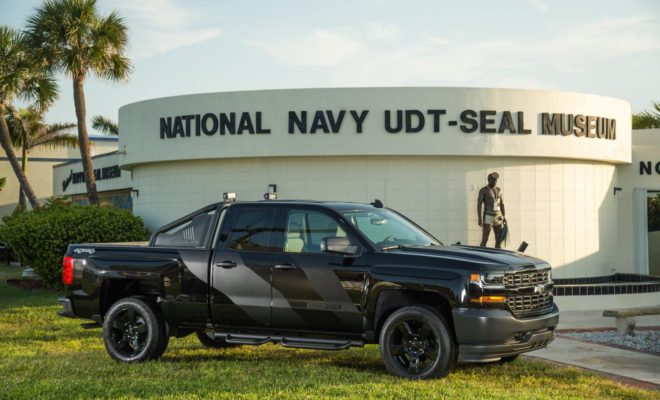 May is National Military Appreciation Month, and Chevrolet is joining the National Navy SEAL Museum to honor the men and women who have served in the U.S. military, particularly its special forces.

Chevrolet will donate a portion of the proceeds from the sale of the all-new, Special Operations 2016 Chevrolet Silverado to benefit the Navy SEAL Museum and its foundation.

Although many know Chevrolet has supported the U.S. armed forces – and institutions such as the Navy SEAL Museum – for many years, most people don’t know:

5.-Not Always SEALs: The UDT teams were not known as SEALs until 1962, when President John F. Kennedy recognized their value and commissioned them as Sea Air Land Teams, again expanding their mission beyond their traditional role.

6.-The Naked Warriors: Because UDT teams went to battle wearing little more than swimming trunks, they were nicknamed “The Naked Warriors.” A statue in their likeness salutes their bravery at the museum.

7.- Saving Captain Phillips: In 2009, Maersk Alabama Capt. Richard Phillips – portrayed by Tom Hanks in the 2013 film “Captain Phillips” — was held hostage by pirates off the coast of Somalia until U.S. Navy SEALs rescued him from the ship’s lifeboat. This lifeboat is on display at the museum.

8.- A Unique Memorial: The Navy SEAL Museum is the only memorial in the world dedicated to the UDT divers and Navy SEALs who have made the ultimate sacrifice. Like the Vietnam Veterans Memorial in Washington, D.C., their names are carved into black granite panels on the walls surrounding the sculpture of a modern Navy SEAL diver and its reflecting pool.

9.- More Than a Museum: Through its Trident House Charities program, the Navy SEAL Museum provides assistance to military families. The Trident House itself provides complimentary respite to the families of Navy SEALs and other special operations forces. The Navy SEAL Museum Scholarship Program provides assistance to children from the families of special operations forces as they pursue their education.

10.- Tools of the Trade: The UH-60 Black Hawk is a four-bladed, twin-engine, medium-lift helicopter manufactured by Sikorsky Aircraft. The helicopter on display at the Navy SEAL Museum was donated by the “Night Stalkers” 160th Special Operations Aviation Regiment (SOAR). In 2012, it was used during an operation to rescue hostages Jessica Buchanan and Danish citizen Poul Hagen Thisted from pirates in Somalia.