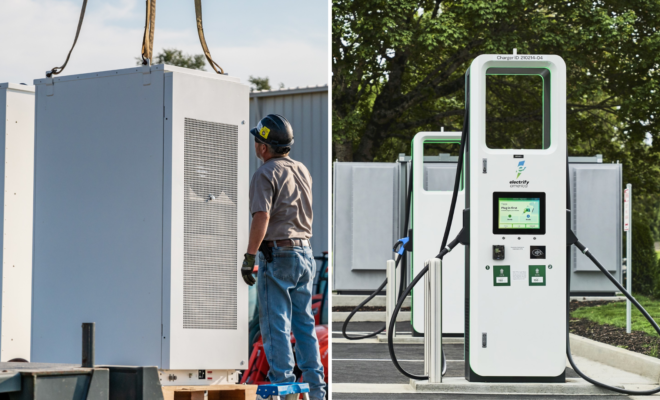 “We are constantly striving to introduce innovations that will drive the EV industry forward,” said Giovanni Palazzo, president and chief executive officer at Electrify America. “With this significant deployment of battery energy storage, Electrify America will be able to help ensure a more efficient customer experience, especially as EV adoption increases and infrastructure demands continue to grow.”

One of the prominent obstacles utility providers face can be “demand charges,” which are electricity surcharges on peak power usage designed to capture the marginal costs imposed on the grid by high-capacity, high-utilization infrastructure, such as factories. When traditional demand charges are levied upon high-capacity, low-utilization infrastructure such as high-powered EV charging stations, they place a disproportionate cost burden on the station owners.

While many states and utilities look to streamline electricity rates to better support public charging infrastructure, Electrify America’s investment in energy storage helps to facilitate the roll-out of ultra-fast DC fast charging where it may otherwise be cost-prohibitive.

Electrify America’s investment in onsite behind-the-meter battery energy storage also has the potential to maximize renewable energy use. Energy storage has the ability to help store excess renewable energy to be used in times where those renewable sources may not be available, and further leverage the tailpipe emissions reductions that follow from transportation electrification.

Beyond this installed energy storage portfolio, Electrify America is working on certification and initial roll-out of its next generation of onsite behind-the-meter battery energy storage early next year that will support higher peak power or demand mitigation capability in approximately the same footprint.

Such innovation of energy storage solutions tailored to the DC fast charging use case differentiate Electrify America’s energy services offerings to support drivers as well as commercial associates via its Electrify Commercial division.

With the help of Olivine, Electrify America is driving revenue from behind-the-meter services for its onsite battery energy storage assets, delivering consistent pricing to its customers and offering greater reliability than fluctuating gas prices.

Behind-the-meter services such as demand response help support vehicle-grid integration by reducing the need for more costly and often more polluting peaking power plants. These services may otherwise be used to meet such incremental demand, decreasing the carbon profile and potential emissions associated with the electricity generation that powers Electrify America’s network.

In the future, as utility regulations and energy markets evolve, Electrify America aspires to potentially provide power back to the grid from its energy storage to enhance the vehicle-grid integration benefits of its investments.