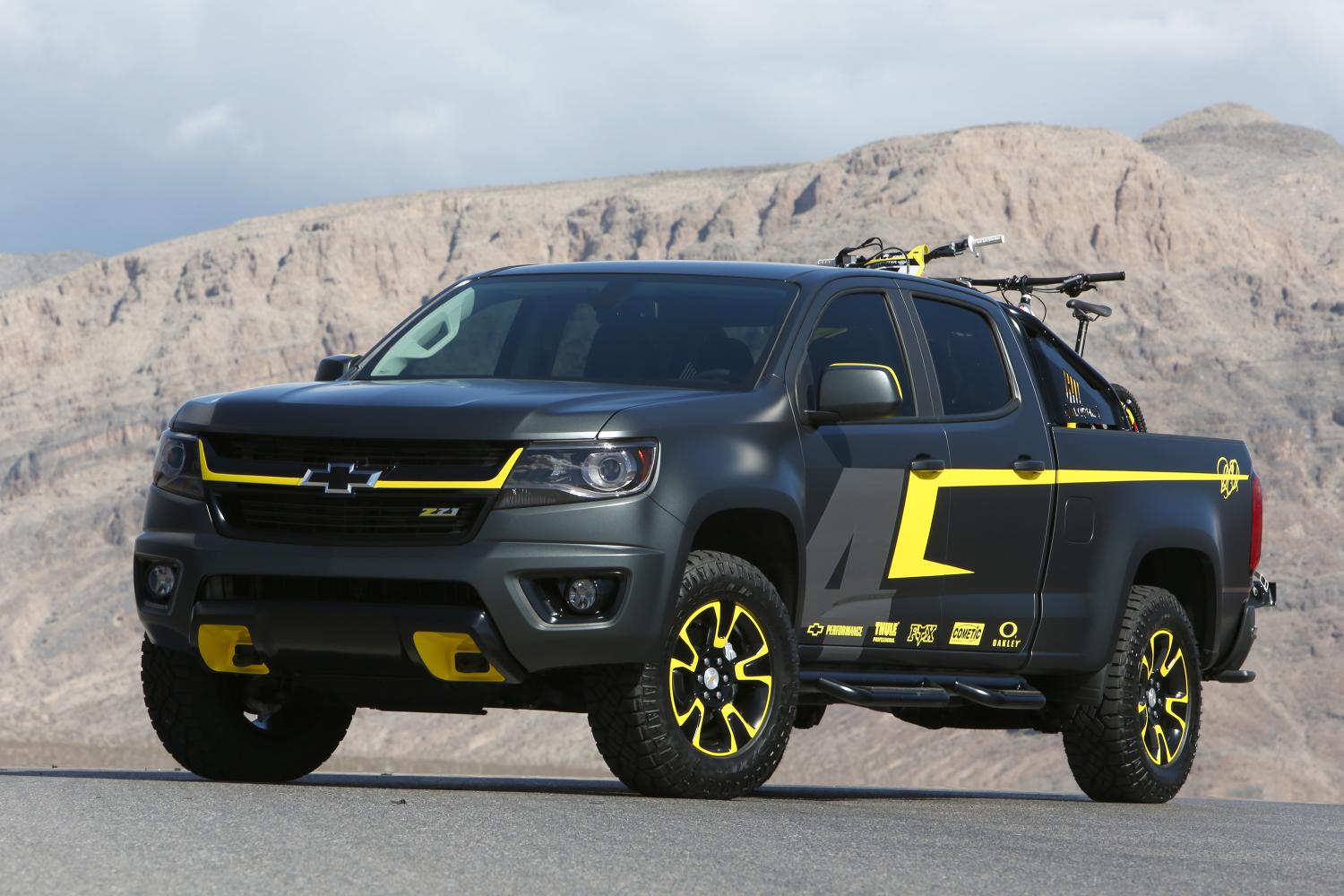 Motocross legend Ricky Carmichael has the perfect go-anywhere transporter in the all-new Chevrolet Colorado for his motorcycle, mountain bike and the gear that goes with them.

Carmichael teamed with Chevrolet to develop the Colorado Performance concept to illustrate the lifestyle-supporting capability of Chevy’s new midsize pickup truck. It debuts this week at the SEMA Show, the world’s largest trade show of automotive performance and personalization. 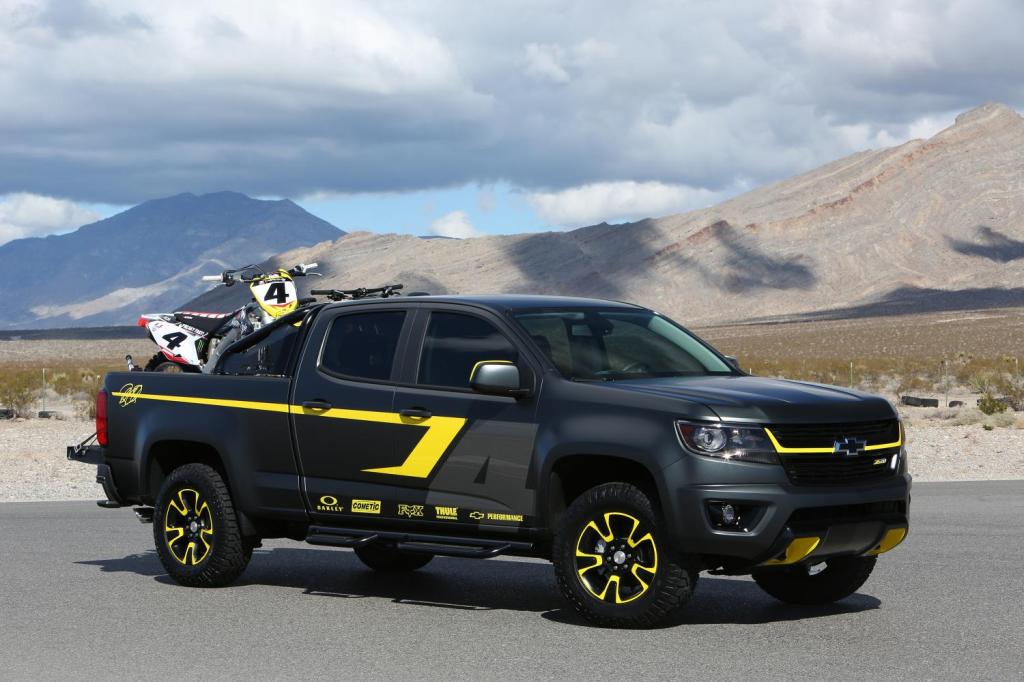 “Where I take my bikes, a full-size truck isn’t always the best solution, so a maneuverable midsize truck like the Colorado is just the ticket,” said Carmichael. “Besides a cargo bed that’s not only large enough to haul a motocross bike and a mountain bike, the Colorado has the power to confidently take them where the pavement ends.” 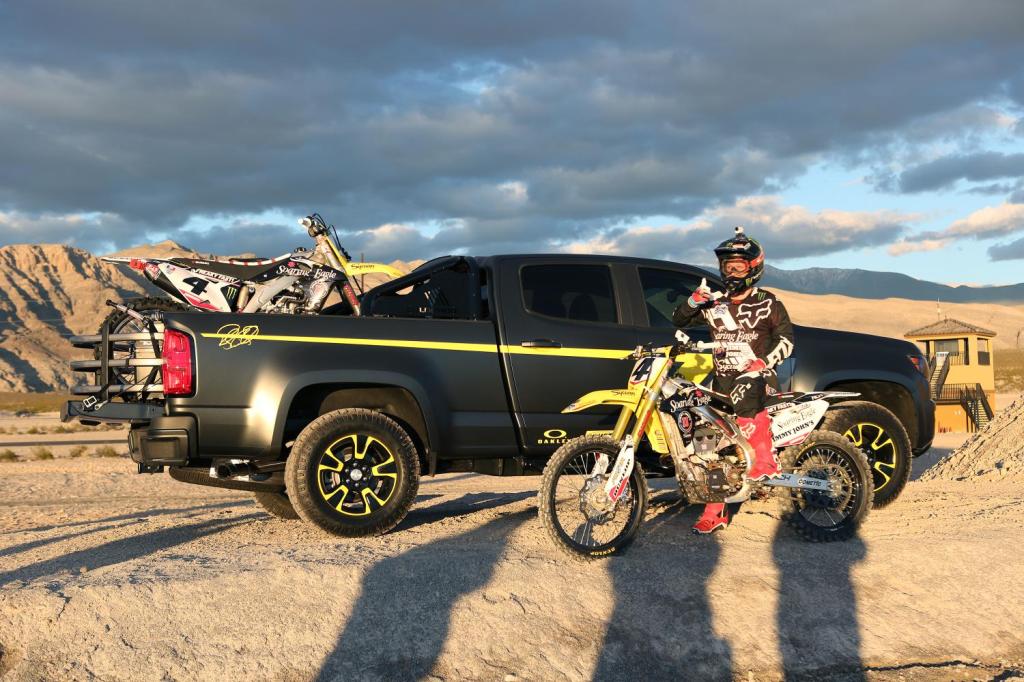 Carmichael consulted with Chevrolet on the unique concept equipment to facilitate the bikes’ mounting in the Colorado crew cab’s 6’ 2” cargo bed, which allows hauling of items up to eight feet long with the tailgate down. A concept tailgate extender helps secure the bikes, while the Colorado’s standard CornerStep rear bumper makes it easier to step up and reach into the bed to tighten hold-down straps or retrieve other gear.

The concept mounting features on Carmichael’s Colorado were developed with the same eye on integrated functionality that’s offered in production accessories available today for Colorado customers – including the patent-pending GearOn™ system. It’s designed to hold larger items such as bikes, boards and kayaks above the bed, leaving room for smaller gear such as tents and sleeping bags in the bed. It can even accommodate 4 x 8-foot sheets of plywood above the wheelhouses. 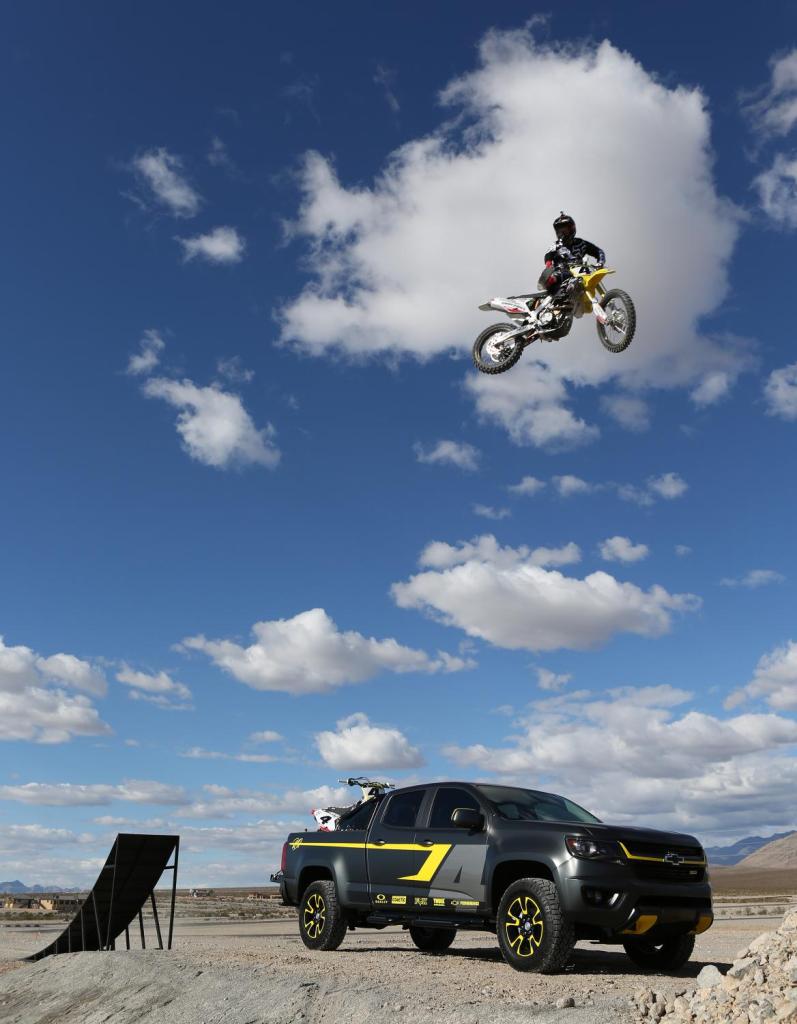 Customers can have the accessories installed when they purchase their new truck, so they are ready at the time of vehicle delivery. In fact, they can even roll their cost, including any installation charges, into the monthly payments for the Colorado, and carry a warranty backed by General Motors.

With his motorcycle and mountain bike safely mounted, Carmichael and Chevrolet designers turned their attention to the Colorado’s exterior and interior to give it a one-of-a-kind appearance reflecting the hall-of-fame racer’s competitive spirit.

The truck was given a unique matte gray exterior color accented with high-gloss silver and yellow accents – and a graphic of Carmichael’s signature. The production 17-inch Z71 aluminum wheels were accented with yellow highlights and wrapped in Goodyear Duratec off-road tires. A concept sport bar was also added to the bed. 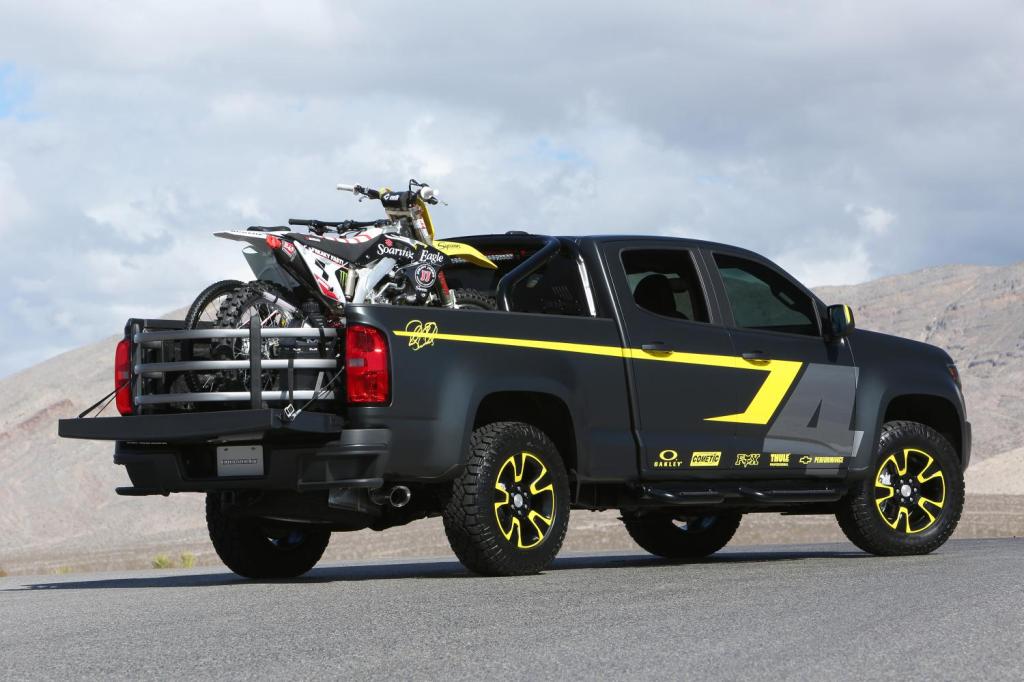 Yellow accents were added to the interior, along with Carmichael’s racing number 4 embroidered into the front seat headrests. Like the production Colorado, Carmichael’s concept version is well connected via Chevy MyLink with a built-in 4G LTE Wi-Fi hotspot. There’s also a standard rearview camera system that’s helpful when backing up with tall cargo, such as a motorcycle.

And when it comes to the power Carmichael appreciates, the Colorado delivers the segment’s most powerful and efficient engine: an available 3.6L V-6 rated at 305 horsepower and 269 lb-ft of torque – and 26 mpg on the highway (2WD models), according to EPA estimates. The concept vehicle features a concept performance exhaust system.

That power supports segment-leading capabilities, too, including a 7,000-pound maximum trailering capacity with available heavy-duty trailering package, and a maximum payload capacity of 1,590 pounds.

“The Colorado does everything I want in a pickup truck,” said Carmichael. “It simply does it in a smaller package that fits the lifestyle of a lot of people like me.”