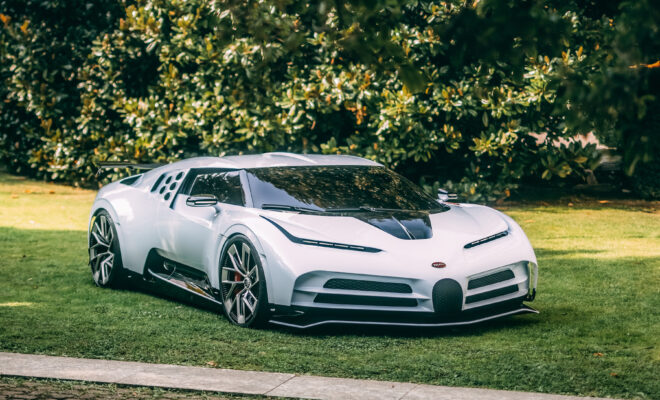 Bugatti brought the Centodieci to the renowned international Concorso d’Eleganza at Villa d’Este, Como, Italy last weekend. Also on display at the prestigious event was the Bugatti EB 110 SuperSport “America” – once the personal car of former chairman of Bugatti Automobili S.p.A. Romano Artioli.

With its timeless beauty, Villa d’Este on the shores of Lake Como has provided a residency for the aristocracy, princesses, marquises, sultans and tsars for centuries. Considered one of the most breath-taking architectural works of the sixteenth century, every year, this elegant five-star resort welcomes automotive enthusiasts from all over the globe to the Concorso d’Eleganza Villa d’Este. Here, they can appreciate the spectacle of some of the finest automobiles and motorcycles, in both production and prototype form, ever created. This year, visitors could also enjoy Bugatti’s stunning Centodieci, which the French luxury brand was presenting in the ‘Concept Cars & Prototypes’ category over the previous weekend from Saturday 2nd to Sunday 3rd October 2021.

Bugatti unveiled the Centodieci – which translates as 110 in Italian – during Monterey Car Week in California at the Quail in 2019 to celebrate the company’s 110th anniversary. Inspired by the legendary Bugatti EB110 of 1991 and powered by the 8.0-liter W16 engine producing 1,600PS, just 10 Centodieci units will be hand-built at Bugatti’s Molsheim Atelier and be delivered to customers next year. All ten Centodieci models had already been accounted for by customers prior to the car’s unveiling.

A Concours d’Élégance for automobiles was first held at Villa d’Este back in 1929, and Bugatti has enjoyed a long and successful relationship with the event. Recent highlights have included the Bugatti La Voiture Noire taking the premiere prize in the ‘Concept Cars & Prototypes’ category the last time the event was held in 2019. Models from Bugatti’s illustrious past, such as the 1937 Type 57S four-seater sports tourer, the 1934 Type 59 Grand Prix car and the 1938 Type 57SC Atlantic, have all been awarded significant accolades in recent years.

This year also marks the 30th anniversary of the Bugatti EB110. The groundbreaking and first supercar of its time represents the mid-period of Bugatti’s history, when Bugatti Automobili S.p.A. was based in the famous ‘Blue Factory’ in Campogalliano in Italy under the stewardship of Romano Artioli. Introduced in 1991 to mark 110 years since the birth of Ettore Bugatti in 1881, the EB110 elevated the supercar genre to a new level. It featured a revolutionary engineering package that included a carbon fiber chassis and a 3.5-litre 12-cylinder engine with five valves per cylinder and quadruple turbochargers. The transmission was also incorporated within the engine block to create more space for cabin occupants. Exemplary grip, traction and safety were delivered by four-wheel-drive, another key D.N.A. strand that remains pivotal to today’s production Bugatti models.

The historic supercar model – a blue (originally silver painted in “Grigio Chiaro metallizzato”) EB110 SuperSport – presented at Villa d’Este in the class “The Next Generation: Hypercars of the 90s” was formerly owned by Romano Artioli. The Italian entrepreneur, who relaunched Bugatti as Bugatti Automobili S.p.A. in 1987, prior to the company’s closure in 1995, has fond memories of the development of this revolutionary supercar. “While we were at the premiere of the EB110 in Paris in 1991, the engineers back at Campogalliano were urging us to return swiftly to the Blue Factory, as they were eager to begin work on the EB110 Supersport version. Everyone was focused on reducing weight and boosting power, while keeping in mind that I was ferocious that the safety characteristics of the car be upheld.”

The final result was a quite remarkable weight reduction of nearly 150kg from the original configuration, and an increase in performance from 560PS to 612PS, with the engine developed entirely in-house at Campogalliano. Immediately after the EB110 SuperSport was presented to the world’s press at Salon de l’Automobile in Geneva, the team took the car to the Nardò circuit in the South of Italy, to carry out the homologation tests.

“After a warm-up lap we set the world record with a speed of 351 km/h and an acceleration of 3.2 seconds from 0 to 100 km,” recalls Artioli proudly. And it didn’t stop there. The car also set a speed record on snow and ice at 296km/h, while a Bugatti EB110 GT powered by natural gas achieved at top speed of 344.7 km/h.

“I left my heart in my Supersport. No other car gives the same sensation of power, control and safety in every road condition as the EB110 – and with such beautiful style. I could not be more proud for “her” to be at the Concours d’Elegance in Villa D’Este.

“The Centodieci Concorso d’Eleganza at Villa d’Este is one of the jewels in the crown of the automotive season,” explains Bugatti Automobiles S.A.S. President Stephan Winkelmann. “After the event was lost to the pandemic in 2020, it is even more special for Bugatti to return to the wonderful location of Villa d’Este and present our Centodieci to customers and friends of the brand from all around the globe. And of course, the event is even more exciting with the presence of the personal Bugatti EB110 Supersport “America” owned once by Romano Artioli himself. This seminal supercar represents the second period of Bugatti’s history, and gave our designers and engineers the inspiration for the Centodieci.”

The Bugatti Centodieci was presented as a static display within the Concorso d’Eleganza Villa d’Este ‘Concept Cars & Prototypes’ area on Saturday 2nd October and again on Sunday 3rd October, the car also participated in the dynamic presentation parade.