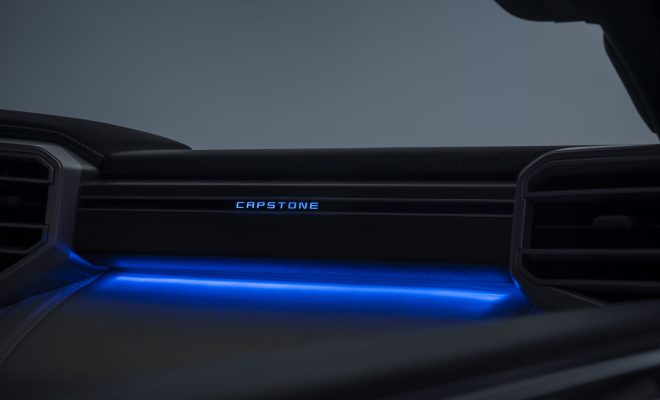 The 2022 Toyota Tundra Capstone is seen as the next solid step in the full-size truck tier by the auto manufacturer. The new hybrid range-topper is meant to give the F-150 Limited and its rival Sierra Denalis a run for their money.

So, what does the 2022 Toyota Tundra Capstone i-Force Max offer that all these vehicles don’t? Quite a bit, as it turns out.

Tundra has done away with the old one to build the new one. One reason for this is, and probably you already guessed, that the old one was very old.

This time, Toyota has done away with the V8; instead, there is a 3.4-litre, V6 twin-turbo engine. Then there is a motor nestled in between the transmission and engine. Speaking of transmission, it is a 10-speed auto; hybrid powertrain called the iForce Max. The combined power output is a range-topping 437 HP and 583 lb/ft of torque. So, it’s slightly beefier than the F-150’s 430HP.

Also, a multi-link suspension and coil springs are within the newly redesigned body. You also have the option of rear air suspension.

The 2022 Toyota Tundra Capstone i-Force Max is a joy to drive. It is comfortable to sit in, with its large black and white semi-aniline leather seats. The overall black-tie feeling is unlike what you’d get with other brands, especially accentuated by the Dark American Walnut, which lines the centre console, dashboard, and door handlines. There is also a bit of leather across the dash, giving it a welcoming, airy feeling.

A panoramic moonroof further accentuates the feeling of roominess. Toyota has worked extra hard on sound-dampening the cabin because it feels quieter than before, but it could also be down to the improved front acoustic glass.

The 2022 Toyota Tundra Capstone i-Force Max is the first Tundra produced by Toyota that boasts of a brand new infotainment system called the Audio Multimedia System. While it has the same interface we saw in the Lexus LX600, it comes with a larger 14-inch screen here. The menus are more accessible than ever to navigate; there is also wireless phone mirroring and hand-free operation using “Hey Toyota.” Also, the good thing is that climate control isn’t buried deep within the menus but is easily adjustable via physical controls.

Other features include Straight Path Assist, which adjusts the steering wheel as you back into a straight line.

One of the first things I noticed when driving the 2022 Toyota Tundra Capstone i-Force Max is its comfort. Regardless of how bad the surface is, you can’t feel a thing in it. Plus, the torque kicks in fast, and the transmission swiftly shifts into the right gear every time. There isn’t this feeling of sluggishness that you get with other trucks.

The 2022 Toyota Tundra Capstone i-Force Max is the ideal truck for those who want a pleasure vehicle that turns heads and can double as a daily driver. It’s comfortable, easy to drive and packed with the latest features that have yet to make it to other vehicles by Toyota.