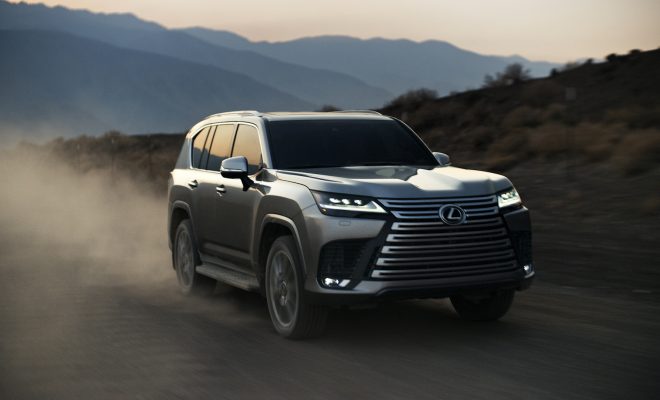 The 2022 Lexus LX 600 Luxury is designed from the ground up to ensure that everyone inside it has a luxurious experience even when traversing rugged terrain. You can think of the LX600 has a 300 Series LandCruiser with an extra helping of all the goodies. In other words, there is more luxury, more to the suspension, and additional equipment.

The 2022 Lexus LX 600 Luxury comes with height adjustable shocks, which is unlike similar vehicles in this class. In addition, it is available in Ultra Luxury specs. While this 2.6-tonne giant can only accommodate four adults, those four adults will be accommodated in sheer opulence.

The LX 600 comes in four trims. You’ve got the base model LX600, followed by the F Sport, then the Sports Luxury, and then the four-seater LX600 Ultra Luxury. All trims are powered by the automaker’s latest twin-turbo V6 petrol engine, producing 305kW/650Nm of torque.

The 2022 Lexus LX 600 Luxury bears one of the largest spindle grilles we’ve ever seen, so you can’t mistake this vehicle for anything else. Yes! It makes a bold impression, but we think the oversized grill could have been a hair smaller. The tail and headlights remain sharp, bearing the same DNA as the RX and NX crossovers.

The flagship LX600 maintains its narrow stance, imparting a rugged, trial-ready look that we love. If anything, the LX600 looks capable of taking on anything in style. However, people who prefer a more refined design may lean in favor of the Mercedes-Benz GLS.

The 2022 Lexus LX 600 Luxury is a sight to behold. Those entering are greeted by a huge centre stack with two touchscreens. Then there is the nearly upright windshield and a relatively shallow dashboard, giving it that unmistakable offroad vibe while ensuring the driver has excellent visibility.

The seats in the front and rear have attractive quilting, with accents on the armrests. The material quality is some of the best we’ve seen from Toyota, it feels premium in most places, but there are also hard plastics to be found, significantly below the knee. Though overall, it has an excellent feeling interior.

The 2022 Lexus LX 600 Luxury has a powerful yet smooth V6, twin-turbo, delivering 409 horses and 479 lb/ft of torque. The numbers are certainly higher than the Range Rover’s 3.0-litre inline six. We can tell you from experience that the LX 600 has no problem getting a move, with the exotic-sounding engine making itself known even at low RPMs. The 10-speed auto is impeccable and highly efficient at sending power to all four wheels via the Torsion locking centre differential.

The 2022 Lexus LX 600 Luxury is one of the best, most powerful vehicles that Toyota manufactures. However, the updated model is smoother, more luxurious and most of all comes with a host of features that, for many, would be worth the upgrade, despite the steeper pricing.