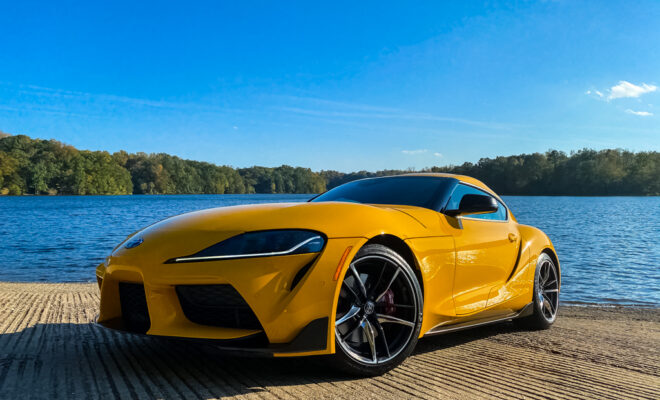 The 2021 Toyota Supra 3.0 GR Premium like its predecessor was mainly developed by outside help. So, while it does bear the Toyota branding on the hood, it is what’s underneath it that matters. In fact, it is in part a BMW Z4. The two vehicles were developed in tandem which allowed the new Supra to be made possible at a fraction of the regular cost of producing it solo. Plus, you can be assured that there is a lot of German DNA on this otherwise Japanese sports car including an inline six cylinder and inline-four cylinder option.

So, how well does the 2021 Toyota Supra 3.0 GR Premium hold up to the competition and can it be considered a significant upgrade over the outgoing model?

Our first impressions are that the 2021 Toyota Supra 3.0 GR Premium is that it is unlike any of the previous Supra. One reason for this is that none of the design cues come from past modes, the exterior styling comes from the concept FT-1 which was showed off in 2014. However, we all know that translating concepts into production vehicles is a whole different level of challenge. While we are happy that a good amount of the FT-1 made it to the Supra, some compromises were made like adding a wider front end.

Now while you might see the Toyota logo, the fact is that the interior is all BMW! The BMW has inspired everything from the rotary infotainment controller to the shifter. The same goes for the touchscreen that is located on top of the dashboard and isn’t embedded in it, like with every other Toyota.

BMW certainly knows its interior, which is why the Supra is so comfortable and yet offers excellent viewing angles. Getting comfortable for the driver and the passengers is equally easy, mainly because of controls that are within reach.

Under the hood, the 2021 Supra coupled with input from BMW, is instantly apparent. If anything BMW knows its cars and so you’d probably be more than happy to learn that BMW has lent Toyota their six-cylinder inline engine. We think its an excellent move, especially since with it, Toyota does not have to spend money on developing a new engine, when there is a perfectly capable one that BMW is producing.

So, the 2021 Toyota Supra 3.0 shares the same engine with the Z4 and many other models. Mated with an eight-speed shifter, it delivers 382 HP and 365 pound-feet of torque. In real-world driving that translates to excellent acceleration, more than what we’ve received in recent years without comprising the vehicle’s top speed. Plus with a rear-wheel-drive system, handing the Supra is pure bliss.

The Supra during our test runs was pretty quick, but that wasn’t what impressed us as much as the vehicle’s maturity. It is quiet, comfortable and offers excellent road grip making it the perfect vehicle for long trips, and back road fun. In our opinion, it strikes the right balance between sportiness and comfort as compared to the Z4, which is more about luxury. That’s why we’d recommend the 2021 Toyota Supra 3.0 over or the Z4 for buyers who want to feel the car instead of riding in boring luxury.