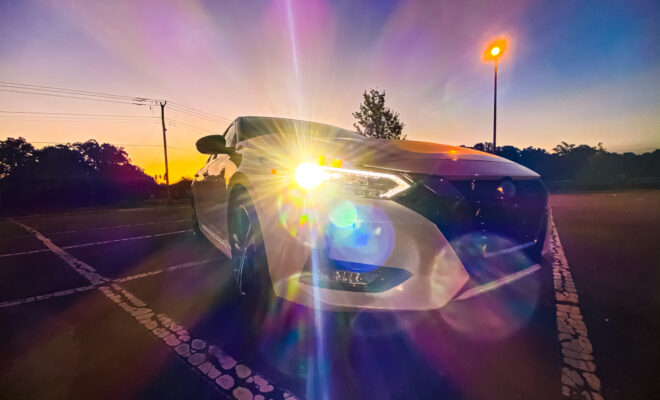 The 2020 Nissan Sentra SR is an entirely redesigned entrant by the company with intentions of stealing more thunder from rivals Honda Civics and Toyota Corollas. While the Sentra has always been a vehicle designed to complete with Corollas and Civics, this time around the competition is stiff.

We put the 2020 Sentra through its paces and were very impressed with the results. However, the question is: does it do enough to compete with its more established class leaders?

One of the most evident improvements over last year’s Sentra is design and styling. The new V-Motion grille is aggressive, attractive and extubates Maxima vibes which is a good thing. Also, similar to its older siblings, the Sentra gets check shaped LED headlights. LED technology has been built into both high and low beams, but for that, you’ll have to shell an extra $2k for the premium package.

Open the door, and you’re instantly greeted with sports leatherette which too is part of the premium package. The accented orange stitching carries over to the shift selector and steering wheel in addition to other surfaces. Speaking of surfaces, 75% of the Sentra feels soft and premium. Rounding it all off on the inside is three circular HVAC outlets across the centre which gives the interior a modern and fresh look.

The couchlike front seats and ones in the back are gone, and this time the seats are a lot more firm but supportive. Seating and driving comfort has improved a great deal, and in some instances, you’ll feel it is on par with the Honda Civic.

Space for passengers on the front and back is good. A regular 6-foot tall person should have enough legroom on either side. Though rear read roof is a tad bit limited owing to the attractive slightly low cut design. However, there is still way more than enough space for most people.

Performance On the Road

The 2.0-litre 2020 Nissan Sentra SR isn’t going to win any awards for acceleration with its 149 horsepower engine capable of producing 146 pound-feet of torque. That said the acceleration is smooth, the engine is quieter than that of the Civic, and because of that, you feel more comfortable driving it.

The continuously variable transmission smoothens out the drive further and allows it to be more fuel economical. Interestingly the CVT is also unusually quieter than the ones used by the competition which adds to the comfort of driving the Sentra.

While 0-60 MPH isn’t impressive but the vehicle can easily dampen blows from potholes and rough roads. If anything, that’s how a daily driver is expected to perform.

The 2020 Nissan Sentra is certainly trading punches with the big boys. It isn’t too far behind the Corolla in terms of comfort or the Civic in terms of engine torque. It is the perfect vehicle for anyone who wants a reliable daily driver, that looks great and performs reliably in all kinds of conditions.