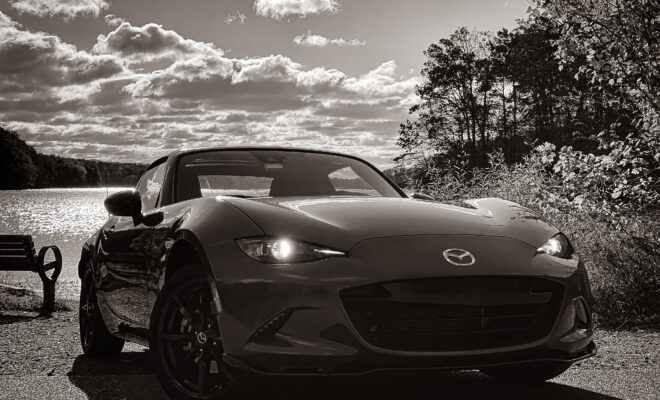 2020 Mazda MX-5 Miata Club RF is one of the greatest, lightweight sport cars

The 2020 Mazda MX-5 has built a reputation that goes back to over three decades of time tested models that break away from the norm. Over the years the Miata has gradually evolved to what is now one of the greatest, lightweight sports car’s we’ve had the pleasure of reviewing.

The 2020 Mazda MX-5 Miata Club RF is so fine-tuned that it’s hard to find anything wrong with it. The Grand Touring (GT) version is tuned to be a daily driver with its more laid-back design that emphasizes on driver comfort but not that the expense of that lightning-fast acceleration. However, in our experience, there is a lot more to the Miata Club RF than what first meets the eye!

One of the first things you’ll notice is that the Miata is incredibly small. While the 2020 model is sharp from the end and has all sorts of aggressive sporty vibes going for it, the Miata continues to pay homage to its slickly designed predecessors.

The design is crisp and compact, but we’d had to say that the retractable roof is the star of the show. So few cars offer it (retractable roof) nowadays that seeing it here made us realize what so many roadsters are missing.

Speaking of roadsters, the Club RF (Retractable Fastback) comes with a folding metal roof which folds behind the seats. It is a welcome departure from the traditional folding roadster.

A Monster Engine for a Tiny Car

The Miata produces a welcome 181 horsepower, which more than decent especially compared to the outgoing fourth-generation MX-5 that produced 151 hp. While on paper the 181 hp may not seem as much compared to the competition, the naturally aspired four cylinders linearly delivers its power, which means that you feel the power through each rev-range. At the very top, the 2020 Mazda MX-5 Miata Club RF feels exceptionally potent, which is where it (2020 MX-5), is a leg up over previous models which used to die out at higher reves. In fact, we found that the transmission wants to be pushed to the very limit.

Speaking of transmissions, the 2020 Mazda MX-5 Miata Club RF is one of the few you can still buy that comes with a manual transmission. The six-speed gearbox is smooth, which makes going through each gear very easy despite each one having a short throw.

We’d be doing the 2020 Mazda MX-5 Miata Club RF a grave injustice without talking about its cabin. In fact, the Miata RF’s cabin is a huge improvement over its predecessors. The Grand Touring trim which is the one we had is one of the most comfortable sporty cars we’ve driven this year.

While it lacks some side bolstering, the seats will keep you in place, especially when slamming it into tight corners. Most people will find that the standard seats offer more than enough in the way of comfort for daily commutes.

While not tech-heavy, it supports Apple Carplay via a high-resolution touch screen center console. Interestingly the 2020 Mazda MX-5 Miata Club RF is surprisingly quiet, with all the windows rolled up, you won’t hear any creating or rattling, which is a sign of excellent build quality.

The 2020 Mazda MX-5 Miata Club RF is for anyone in the market for a zippy, tiny car that doubles as a daily driver. We’d give it a thumbs up for speed, comfort and driving pleasure.