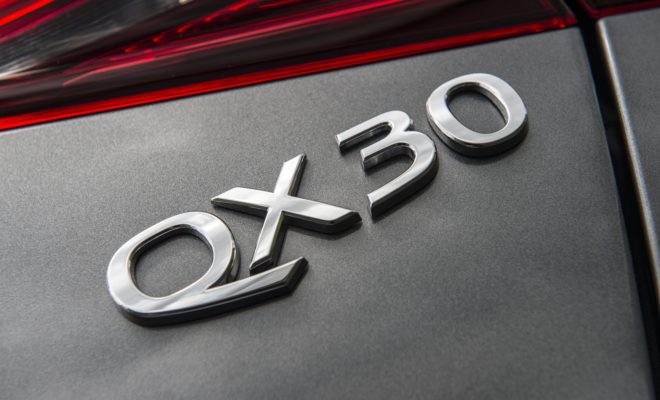 Platform sharing among automobile manufacturers has taken place for years. Oftentimes, this sharing makes good fiscal sense within corporations, with General Motors being a great example. If you are fifity-ish or older, then you remember the 1970’s Chevy Monte Carlo, Pontiac Grand Prix, Buick Regal, and Oldsmobile Cutlass sharing trim and mechanicals. GM mustered five cars from one platform. 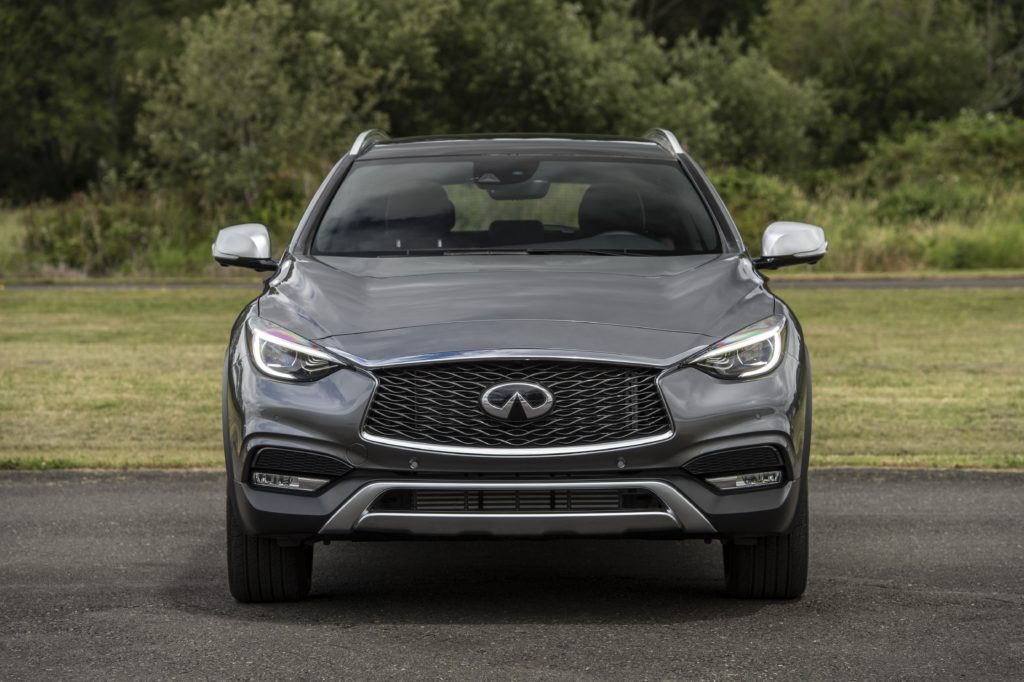 Today, Ford and Lincoln share parts among their sedans and SUVs, as does Lexus with Toyota providing much of the mechanical goods. Other brands also share mechanicals.   For example, the VW Group’s vaunted W12 engine has been used in Volkswagen, Audi and Bentley models. Why build something new when you can keep the bean counters happy by dipping into the corporate parts bin? 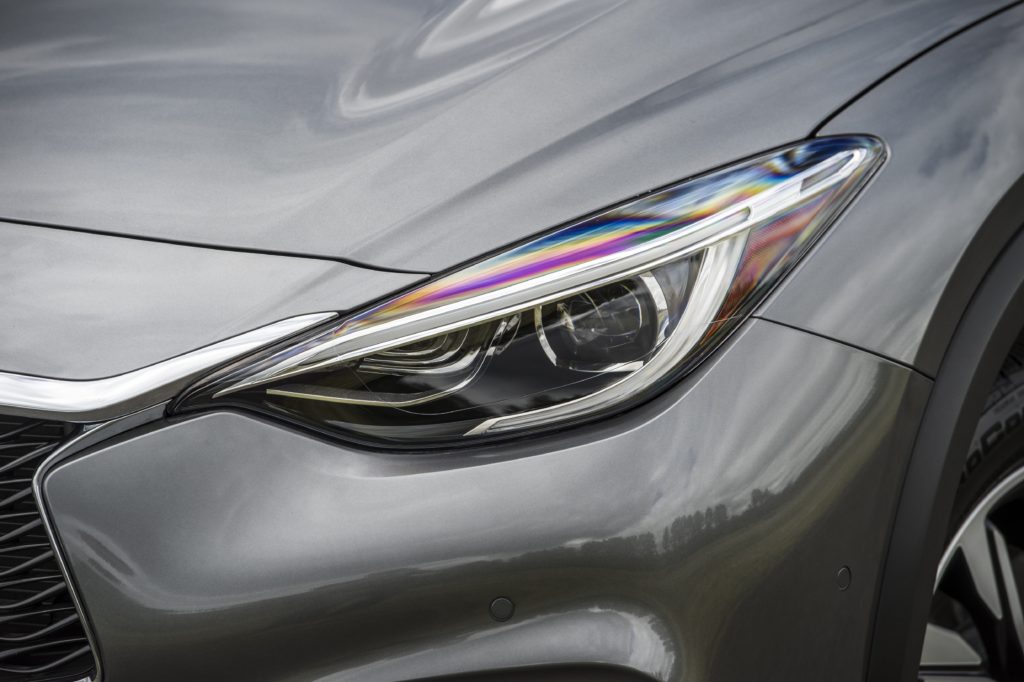 But what is not always known is manufacturers share technology with other companies, even those they would normally consider to be the “enemy,” or major competitor.

Recently, the now defunct Scion brand renamed the Mazda2 as the Scion iA. Toyota and Subaru share the 86 and BRZ platform almost down to each nut and bolt, and Mazda’s MX-5 Miata provides tasty bits for the “Friata,” the slight larger Fiat 124 Convertible.

So it really came as no surprise when Daimler-Benz and Renault-Nissan announced they would join forces in technology/product sharing.

Up first in the U.S. market is the Infiniti QX30, which shares running gear with the Mercedes-Benz GLA 250. 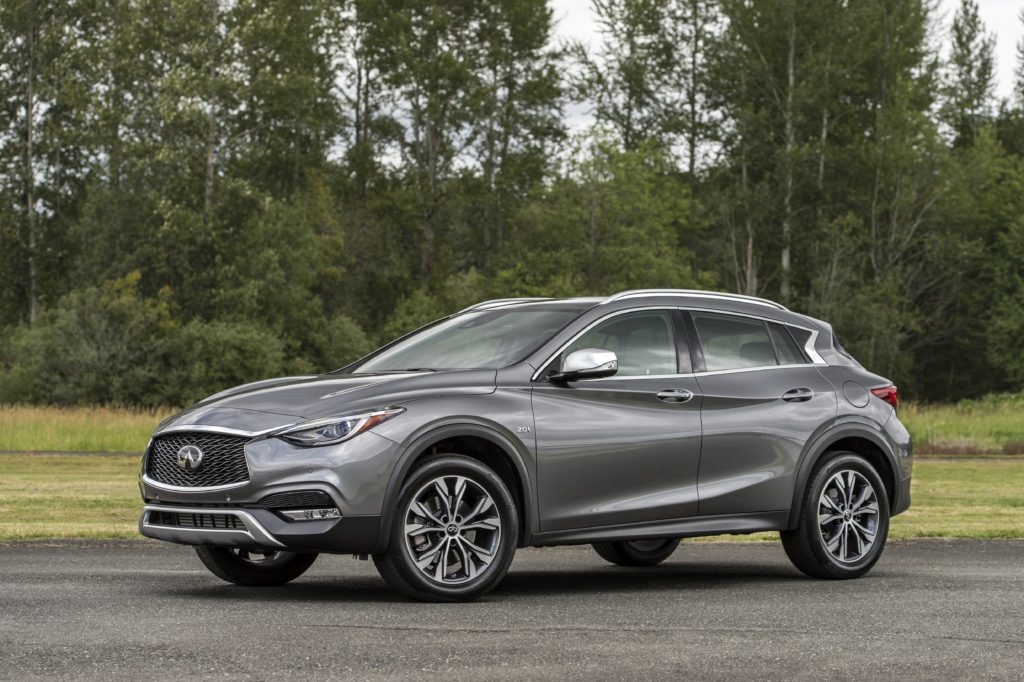 When you first approach the 2017 QX30, you’ll be super impressed with the styling. Externally, this luxe compact ute is all Infiniti, which means it’s gorgeous and well contented. Where the GLA’s styling takes no risks, Infiniti jumps into an Olympic sized pool with a deep breathing front fascia and sensuous side sculpting. QX30’s tall beltline gives the impression this premium active crossover is taller than it is, and Infiniti’s trademark, crescent-shaped “C” pillar lets buyers know the DNA is all Infiniti. 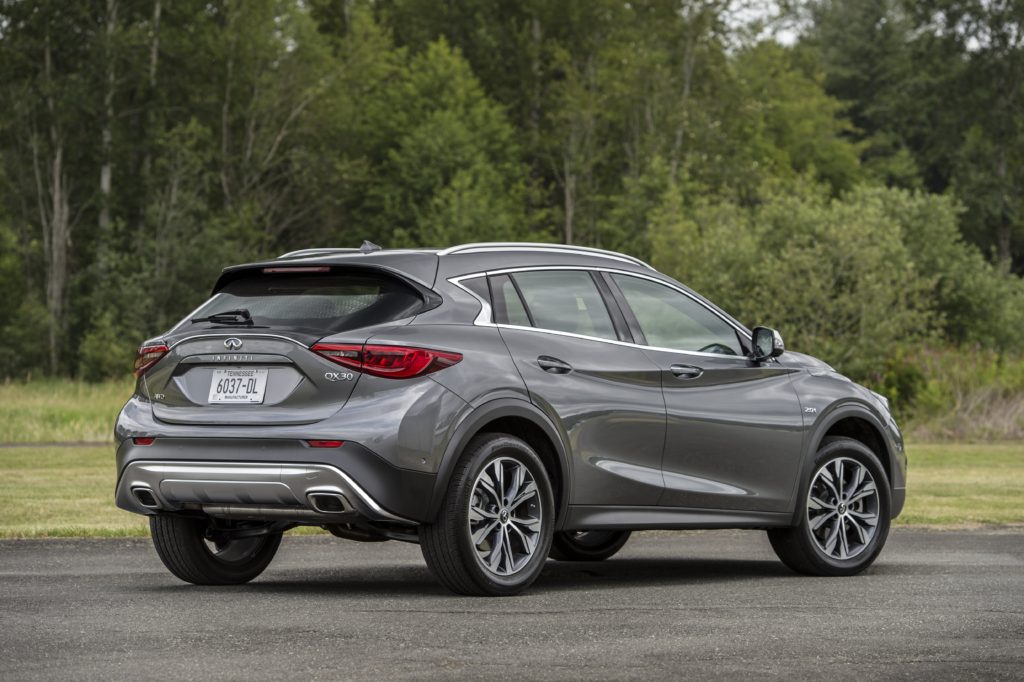 Inside, it’s good to know the interior is also not a rubber stamp of the GLA. For example, the GLA’s telematics screen sits atop the central dash like a permanent iPad. Infiniti’s screen is integrated into the central dash, but below the dash hood. It’s a coin toss as to which design is better, but the hooded screen works well within QX30’s design theme. Below the central screen, Mercedes opts for trio of circular air vents, whereas the QX uses more traditional horizontal vents. Both use a similar rotary controller for telematics functions. And while Infiniti uses a traditional console shift lever for the transmission, the GLA shifter is steering-column mounted. 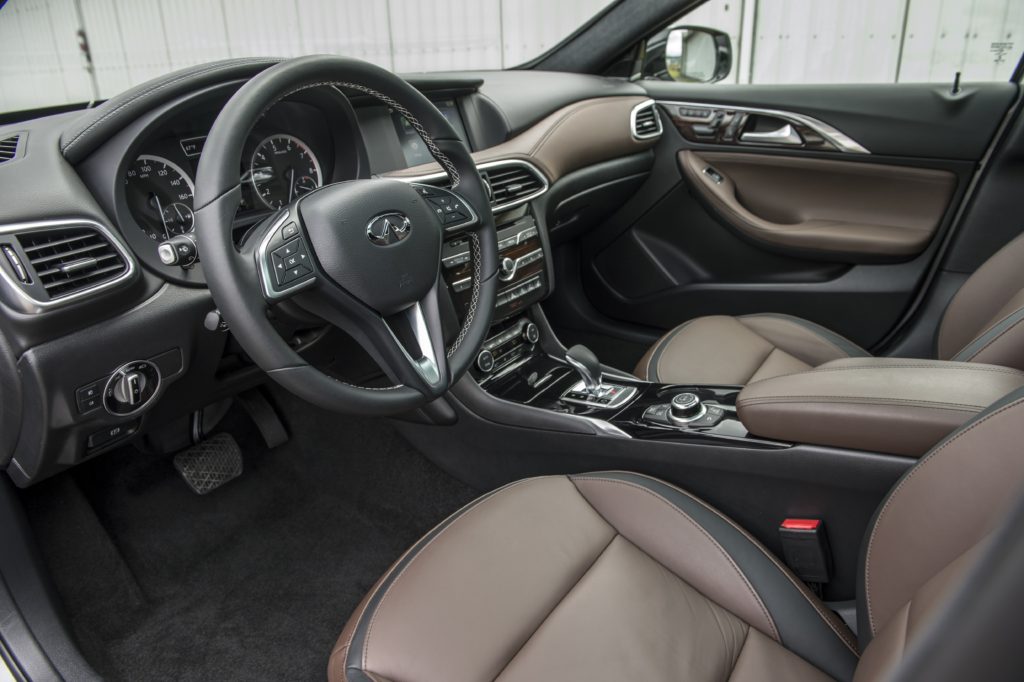 So kudos to Infiniti for sharing technology with Mercedes, but for also spending the money necessary to give the QX30 its own unique personality. In fact the only dead giveaway (besides power seat controls and the Mercedes-Benz three-pointed star logo adorning some underhood parts) is the key fob. As a Mercedes owner, I know the fob well. I chuckled when I saw the identical key with an Infiniti logo instead of the three-pointed star! 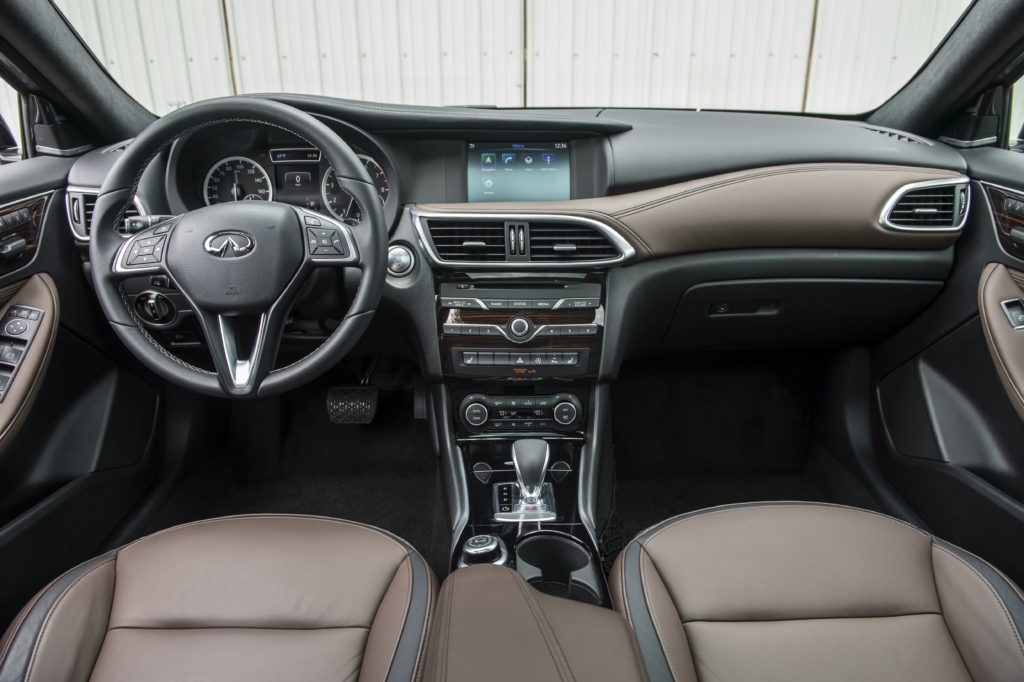 QX30 road manners are very respectable. Underhood lies a Mercedes 2.0 liter, turbocharged, inline four-cylinder motor outputting 208 horsepower and 258 pound-feet of torque. Torque steer was non-existent during normal acceleration and occasionally present during full throttle runs. Power is channeled to the pavement through a 7-speed dual-clutch automatic with steering wheel mounted paddle shifters. During the national press launch for the QX, I spent time in the FWD Sport and AWD Premium trim levels. The AWD system monitors wheelspin, throttle position and vehicle speed and sends up to 50% of the available power to the rear wheels for better traction in adverse conditions. When AWD is not required, 100% of the power goes to the front wheels to maximize efficiency. 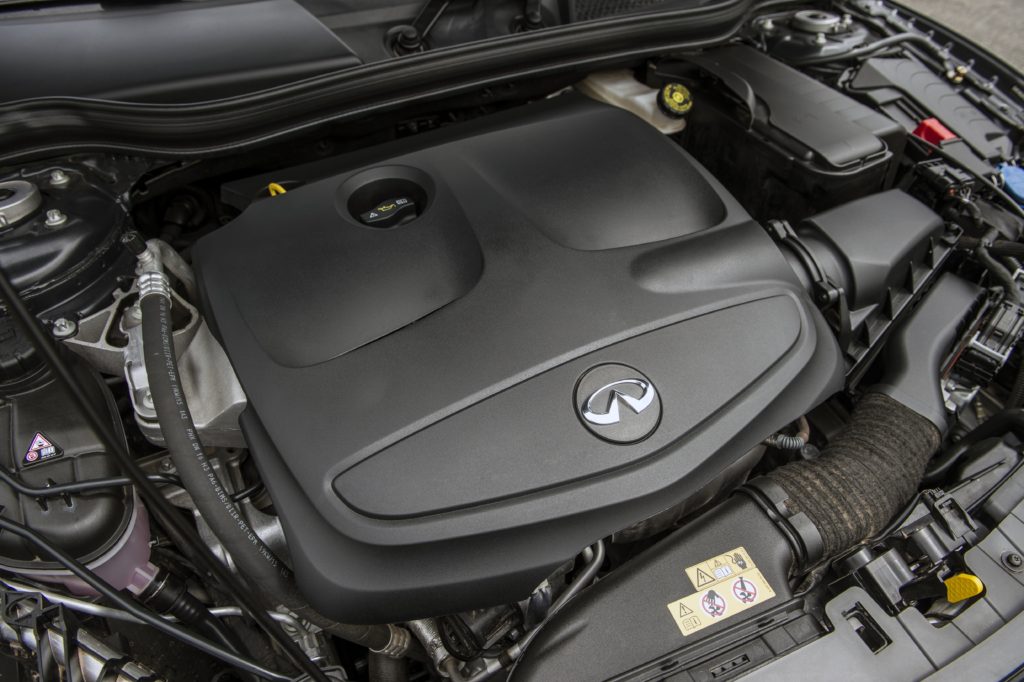 Both were close in road dynamics and handling prowess, though the Sport looked a bit more, err, “sporty,” thanks in part to super stylish 19” Gunmetal alloy wheels wrapped in sticky 235/45-19 summer rubber, and cross-drilled front brake rotors. The Sport model is about 111 pounds lighter than the Premium model, and carries 13.2 gallons of fuel versus 14.8 gallons in the AWD Premium model. The extra fuel capacity is needed with AWD trims, as they exact a 3 mpg penalty in the city and on the highway versus FWD models (21/30 FWD — 24/33 AWD). 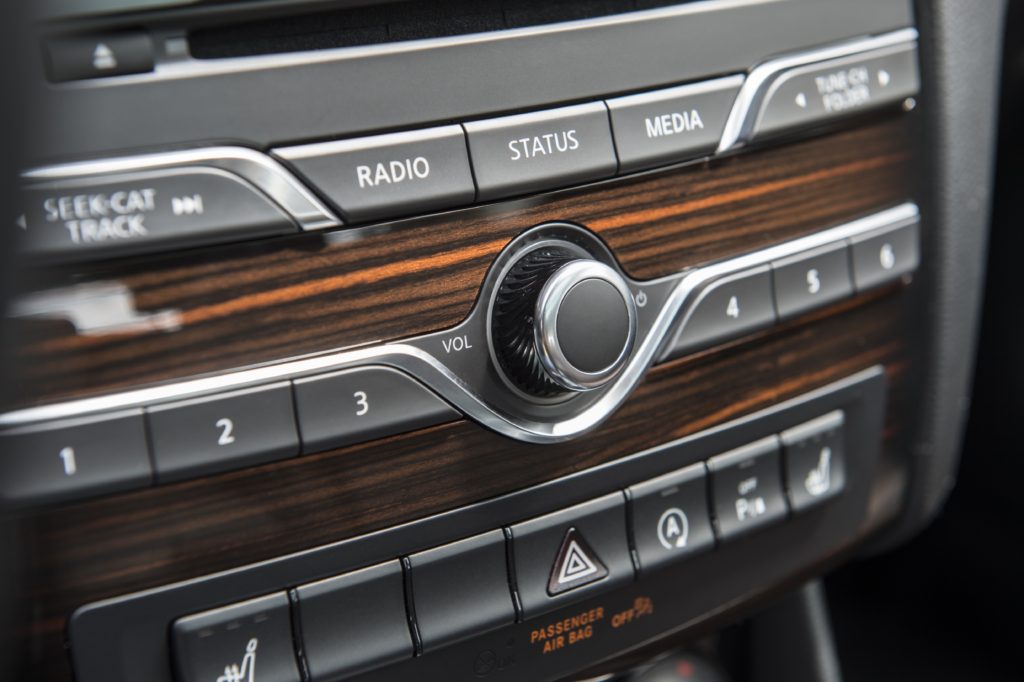 As far as luxury and convenience go, the QX30 is well equipped with a raft of standard and available features. The seven-inch telematics screen offers monitoring of Bluetooth phone and audio streaming, and controls a full suite of standard and available apps, including Infiniti’s proprietary “InTouch” system which integrates navigation, convenience, security and entertainment into a dash-mounted state-of-the-art system. 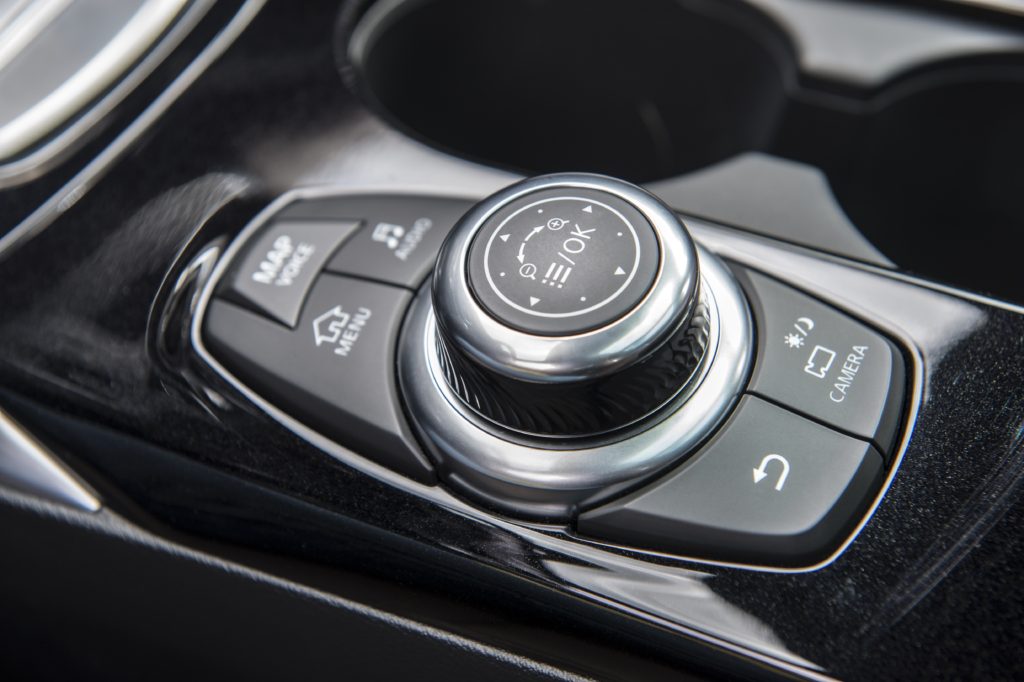 On the high-tech front, Infiniti is, as usual, at the top of its game. I recall an incident more than 15 years ago in an Infiniti Q45. The “Q” was equipped with a then rare backup camera, and I was able to swiftly back into a tight space in the middle aisle of a three-pump gas station. The woman in the car behind me, already filling her car, noticed I did not turn around when backing and violently beat on the back of the Q45 in an effort to get me to stop. “I see you,” was my harried and angry response, as I pointed out the crystal clear dashboard rear camera view with assist lines. “Oh,” she said, and tried to talk about how beautiful the car was! In the 2017 QX30, standard and available tech abounds. Infiniti’s new available Intelligent Park Assist uses 12 sensors to determine if a potential parking spot is the right size. If it is, you simply move the gearshift lever to “R,” press a button to confirm, and operate the accelerator and brake pedals. The QX30 will park itself smoothly in parallel or reverse-in parking spots. 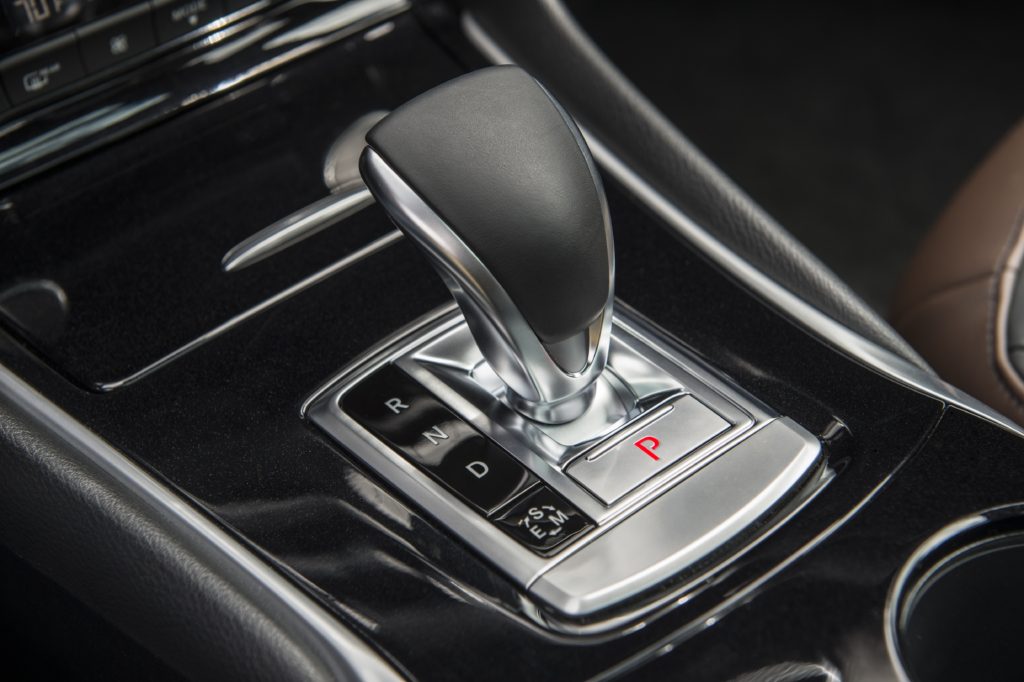 The available Forward Emergency Braking system adds another dimension of security. It can detect vehicles in the lane ahead of you, and if deceleration is required, the brakes are applied to help minimize/prevent a collision. 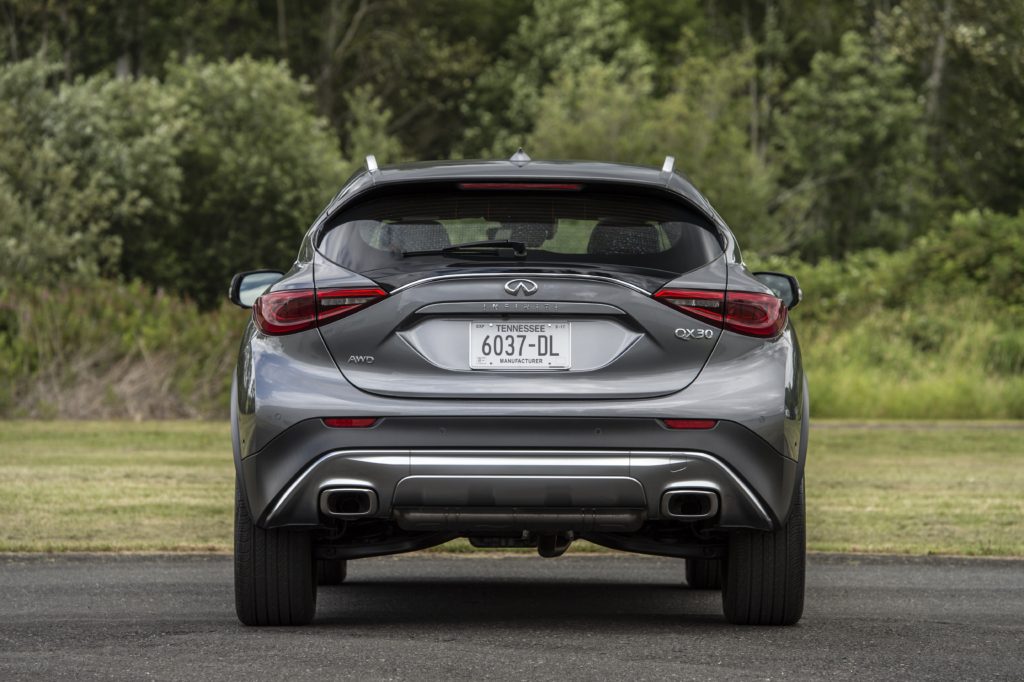 The 2017 QX30 is a well-executed collaboration between automotive titans. I’m looking forward to the next model in the Nissan (Infiniti)/Mercedes-Benz plan.