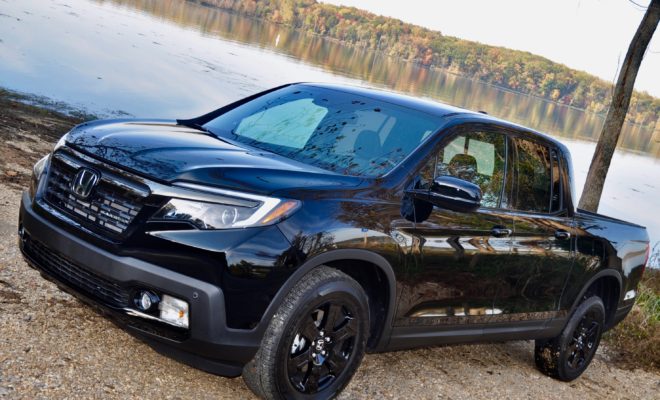 According to Honda, the Ridgeline was not designed to steal sales from the more traditional trucks sold in North America, but was developed to “give the 18% of Honda owners who also own pickups a chance to make their garages a Honda-only parking area.

The first generation Ridgeline was a uniquely engineered vehicle with only 7% of its components shared with Honda’s global light truck platform and 5% shared exterior components. Its powertrain resembled that found in the 2006 Acura MDX but was heavily modified for hauling and towing. 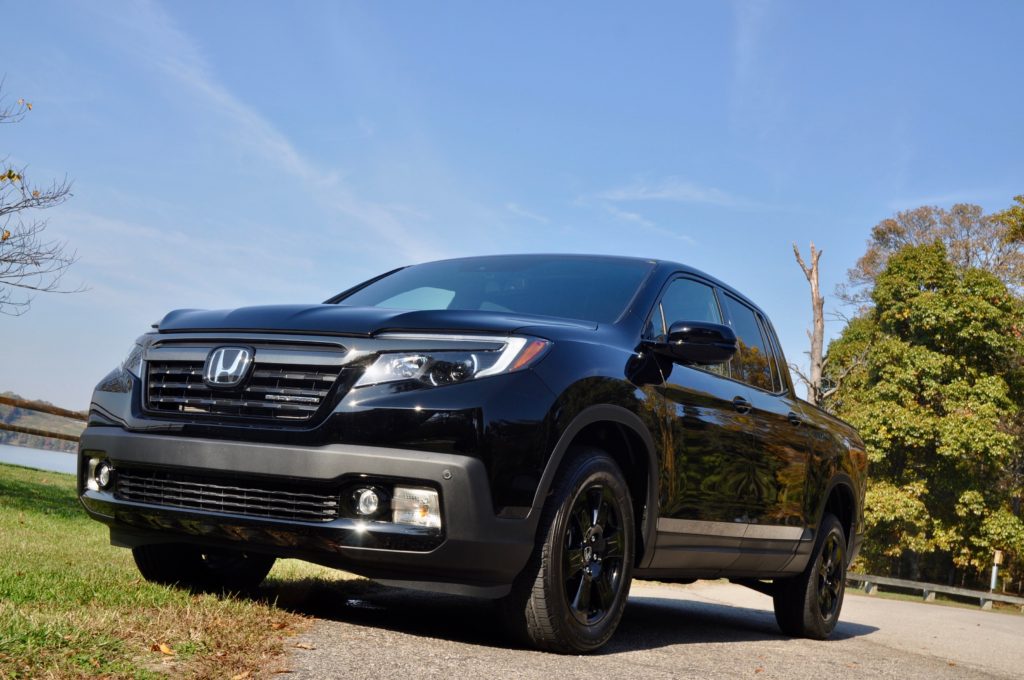 The Ridgeline was “Honda’s first foray into the true heartland of the American automotive way of life”. It was designed and engineered by Honda R&D Americas, led by Gary Flint, who took about four years and approximately $250 million US Dollars (USD) to develop the vehicle. The design was first revealed as the Honda SUT Concept at the 2004 North American International Auto Show. The final production ready version of the Ridgeline was unveiled at the same auto show on January 10, 2005 as a 2006 model year vehicle.

This week in Carsfera.com, 10 years later we are proud to test and evaluate the 2017 Honda Ridgeline AWD Black Edition. Yes, the Black Edition, the top of the second generation Ridgeline.

Cool, tough and athletic would define the aggressive look of our ride. 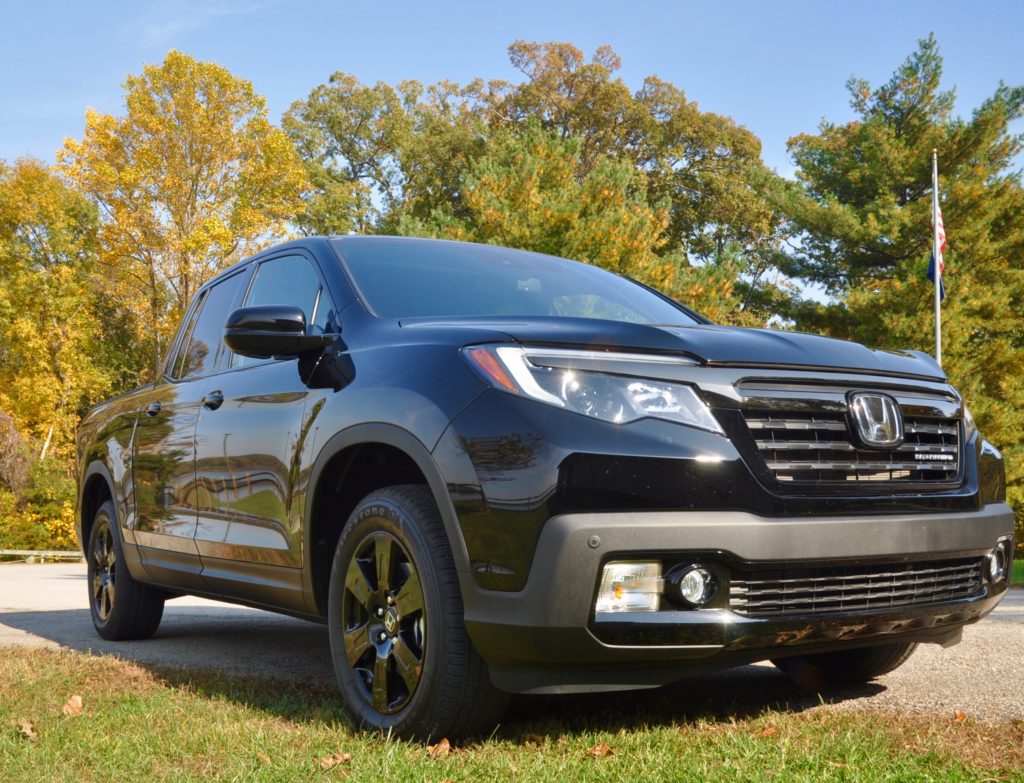 Our Ridgeline Black Edition is the real truck, with payload and hauling capabilities that rival the top competitors in the midsize pickup segment. This Ridgeline isn’t just about doing what other trucks can do; it’s about creating new value and new capability for the customer.

For many customers, their truck isn’t about the job site, it’s about their active, outdoor lifestyles. That means weekend sporting events and tailgates, runs to the desert or out to the country with your dirt bikes and family and friend excursions to the mountains or the lake with toys in tow.

For these buyers, the capabilities of a pickup, mainly hauling and towing dirty and bulky cargo, come with a whole bunch of fundamental compromises inherent to their body-on-frame designs. 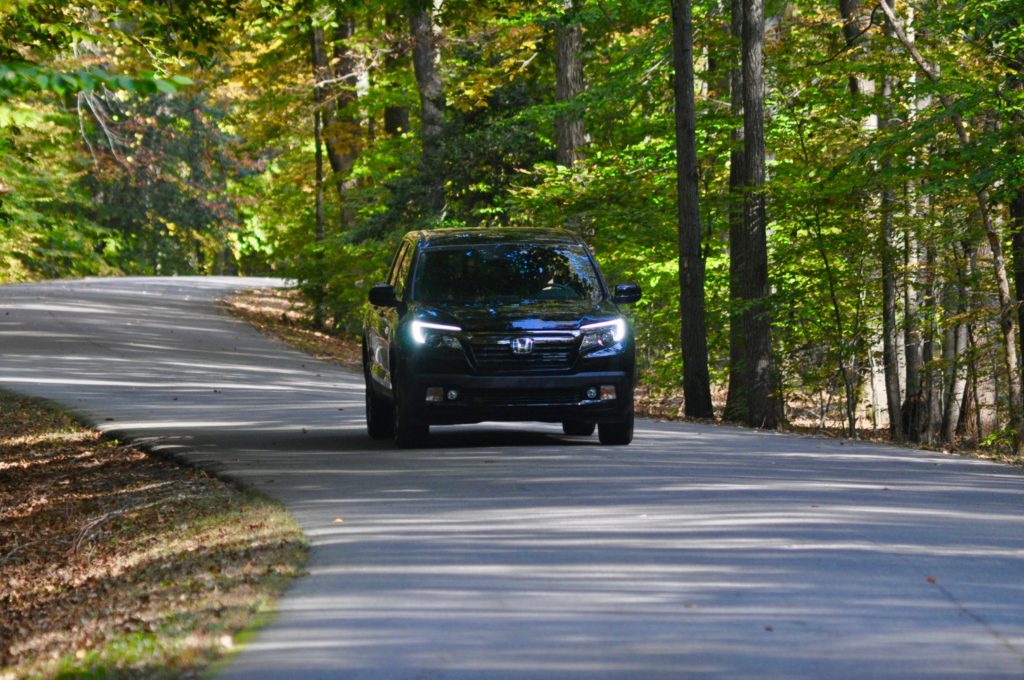 So what do we mean by that? Lack of interior flexibility, everyday drivability, manoeuvrability and road manners, to name a few.

The reality is that most truck buyers spend the vast majority of their time on the road where body-on-frame construction is nothing but a punishment. Our Ridgeline comes to the rescue with a level of ride comfort, steering precision, manoeuvrability and handling that far surpasses the competition. 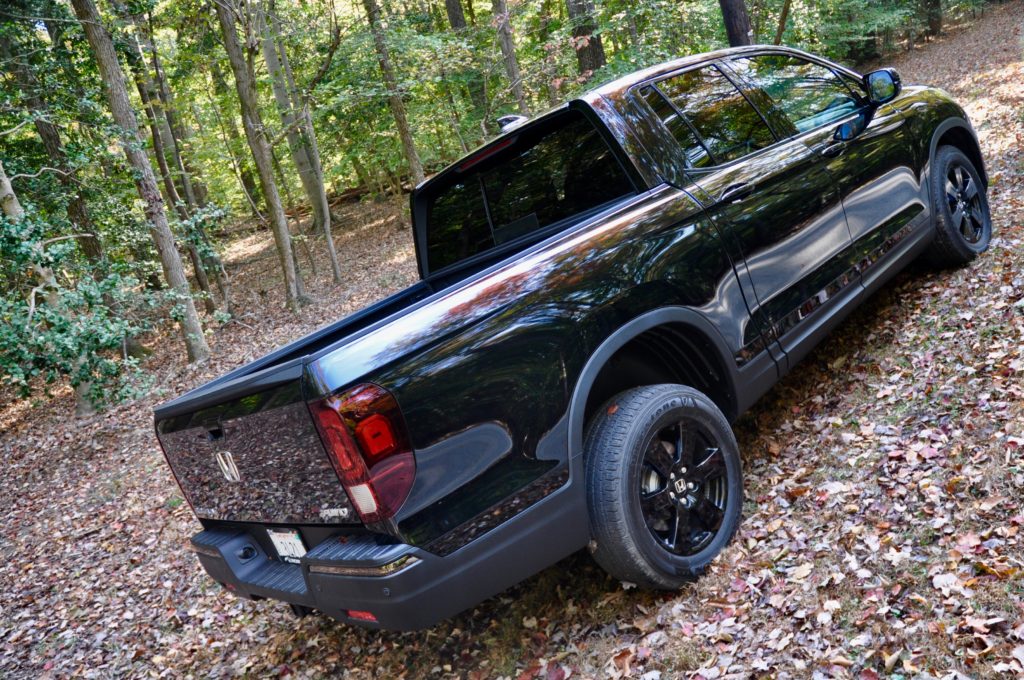 Under the hood our Black Edition is powered by a completely new 3.5-liter direct-injected SOHC i-VTEC V-6 engine with Variable Cylinder Management (VCM), mated to a wide ratio 6-speed automatic transmission. 280 horsepower (+30HP over the previous model) and 262 lb.-ft. of torque (+15 lb.-ft.), along with a 78-pound average reduction in curb weight and a more aerodynamically efficient exterior design, combine to deliver the quickest acceleration and help the Ridgeline receive the highest EPA fuel-economy ratings: 18MPG city, 25MPG highway.

All-wheel-drive is a big deal in this new Ridgeline generation due to the use of the most advanced AWD technology, the Intelligent Variable Torque Management (i-VTM4). This system offers reduced weight, improved all-weather traction and enhanced dynamic handling capability. The Honda i-VTM4 progressively distributes optimum torque between the front and rear axles and dynamically distributes engine torque between the left and right rear wheels, with the capacity to overdrive the outside rear wheel by 2.7 percent to create a yaw moment that improves cornering precision. 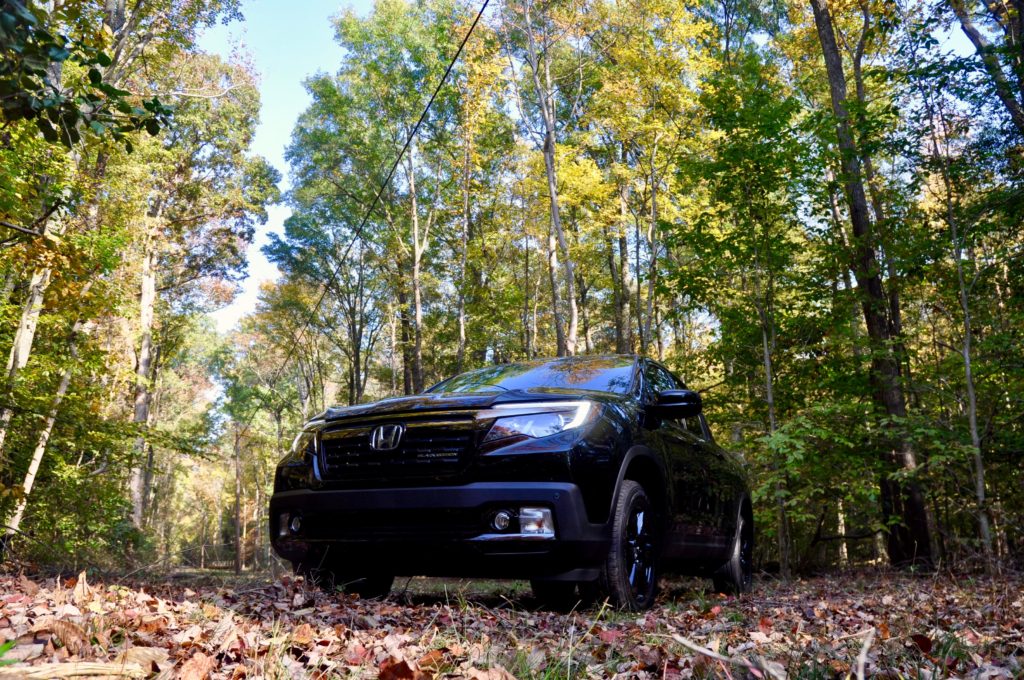 Outside our Ridgeline marries aerodynamic efficiency to a traditional truck profile, with the overall aggressive design of the Black Edition.

In front, the lenses of the LED daytime running lights (DRL) and available LED projector beam headlights are rakish and aggressive. The chiseled front fascia, air inlets and skid plate evoke rugged high performance. The hood and front fenders are likewise strengthened with sharp character lines that add a muscular and purposeful air. 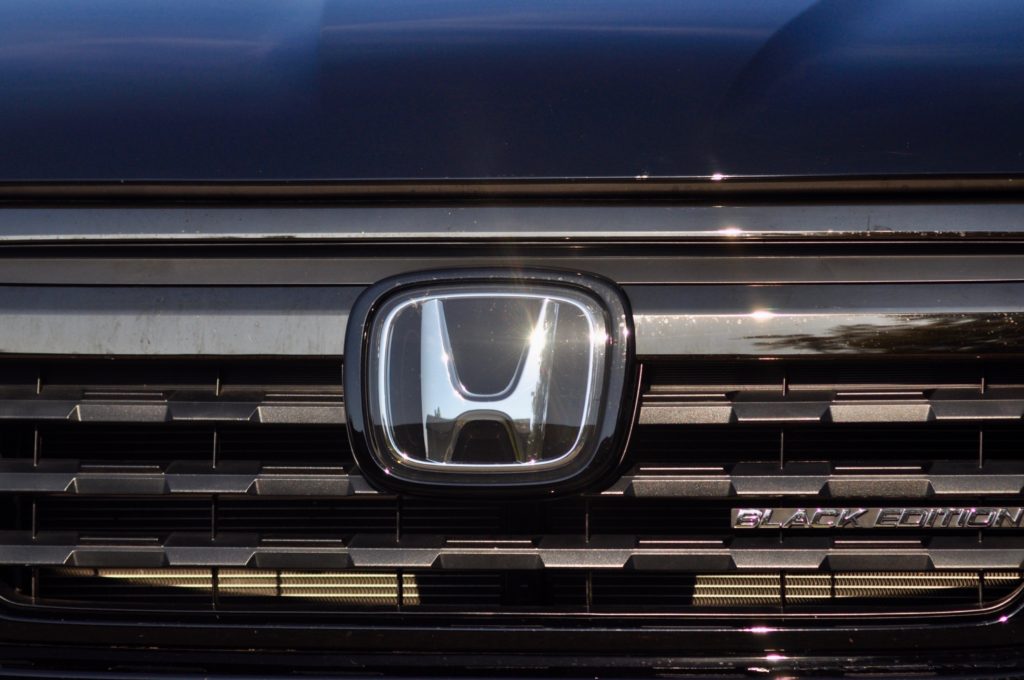 The flush-mounted windshield is raked aggressively, lowering wind noise and improving fuel efficiency simultaneously. The flush side glass, now 43-percent thicker than on the previous Ridgeline, further reduces noise levels in the cabin. The body sides are clean and strong in appearance, with sculpted lower sills, a rising character line and bulging wheel openings all adding visual solidity. A wind tunnel-developed spoiler array at the rear edges of the passenger cabin and top of the flip/swing tailgate help to reduce drag at highway speeds. 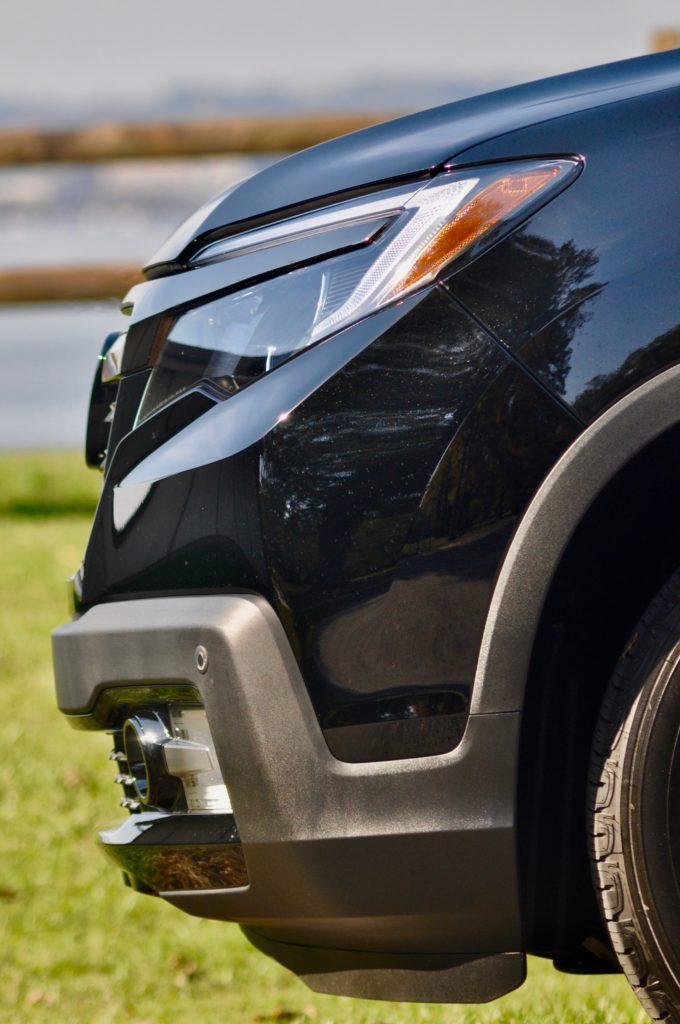 Black chrome trim surrounds the side windows for an aggressive appearance, with the chrome widening at the C-pillar, adding further substance. Standard 18-inch wheels, and in back, a larger tailgate and new LED taillight array further add to the Ridgeline’s substantial presence. 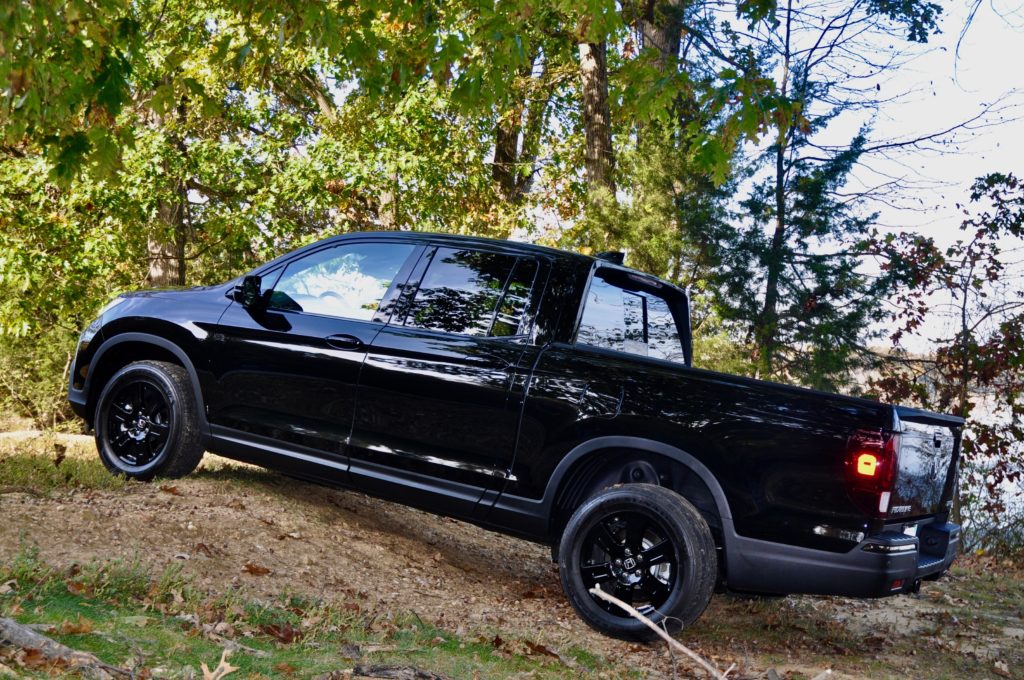 In the back the Ridgeline gets bigger, better in every imaginable way. The longer, wider bed, with the only 5-foot wide flat bed is ideally suited for hauling plywood or drywall. Add to that 350-pound tie downs and a new bed-side storage compartment with an available 400-watt A/C power port, to charge your power tools, your tailgate blender or a flat screen TV, whatever you’re in to. And you like to be original, Honda definitely went original with this Black Edition and they retained and improved the two most innovative and truck-exclusive features: the dual-action tailgate, and lockable In-Bed Trunk that adds a fully flat floor to make that post-game cleanup even easier. And keeping with the tailgate theme, we’ve got another industry first feature, the world’s first In-Bed Audio System. Now, you can’t see it, there are no speakers to get bashed and scraped when you’re hauling mulch or lumber. But you can hear it. Especially with its 540-watt audio system, it’s good old-fashioned Honda engineering magic. 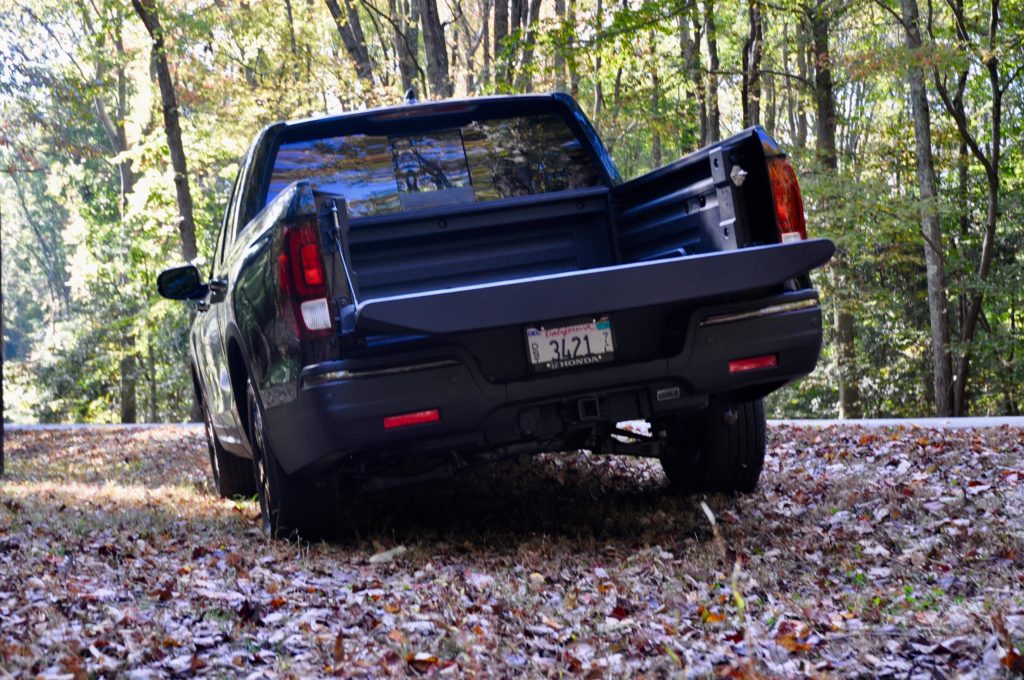 The innovation continues on the inside, where our Black Edition offers a largest cabin space with a higher level of comfort and sophistication: Red-perforated black leather seating with contrasting red stitching, black headliner and upper cabin trim, red accent stitching on the doors, red LED ambient lighting and “Black Edition” logos stitched into the seatbacks and floor mats, heated front seats, a heated steering wheel, and memory seating.

With its split-folding rear seat and class leading under-seat storage, our Ridgeline can handle just about any combination of people and cargo you can imagine. 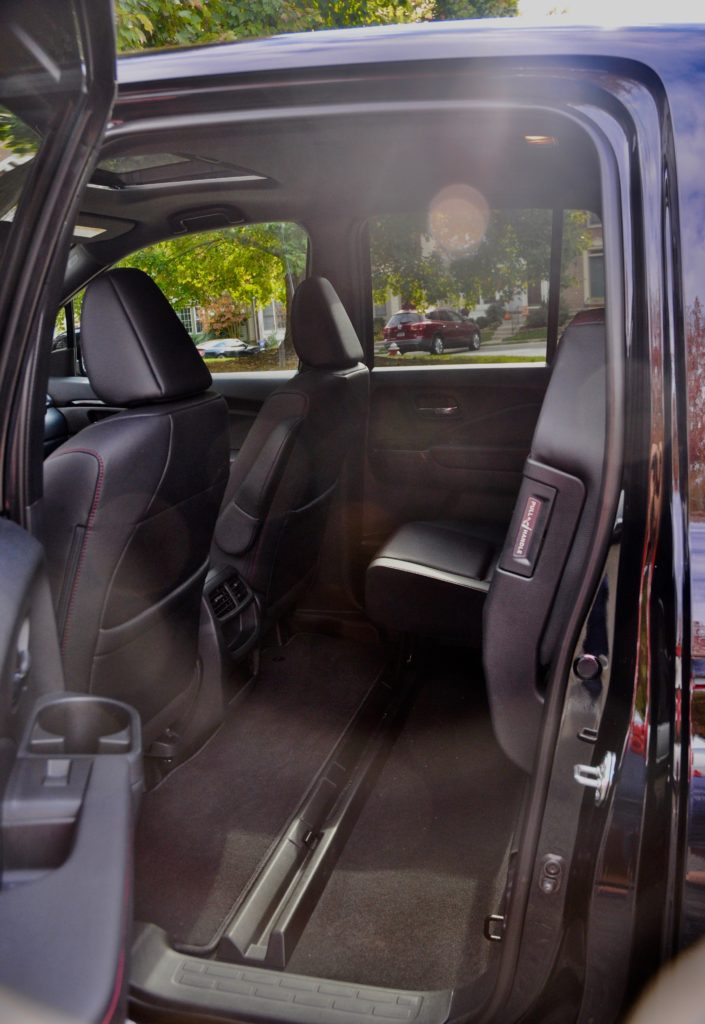 Moreover, our Ridgeline offers all the latest and greatest tech including Apple CarPlay and Android Auto compatibility. 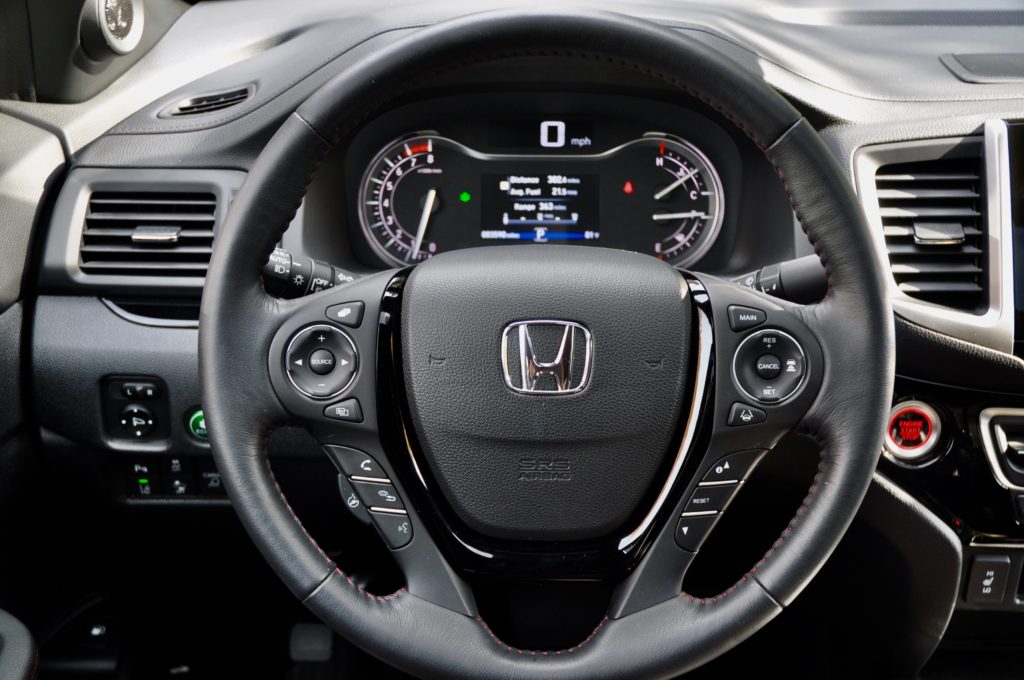 Our Black Edition was designed to provide a high level of safety performance, starting with predictable and stable driving dynamics that help drivers maintain control over their vehicle in a wide variety of driving environments and circumstances, including emergency avoidance maneuvers. 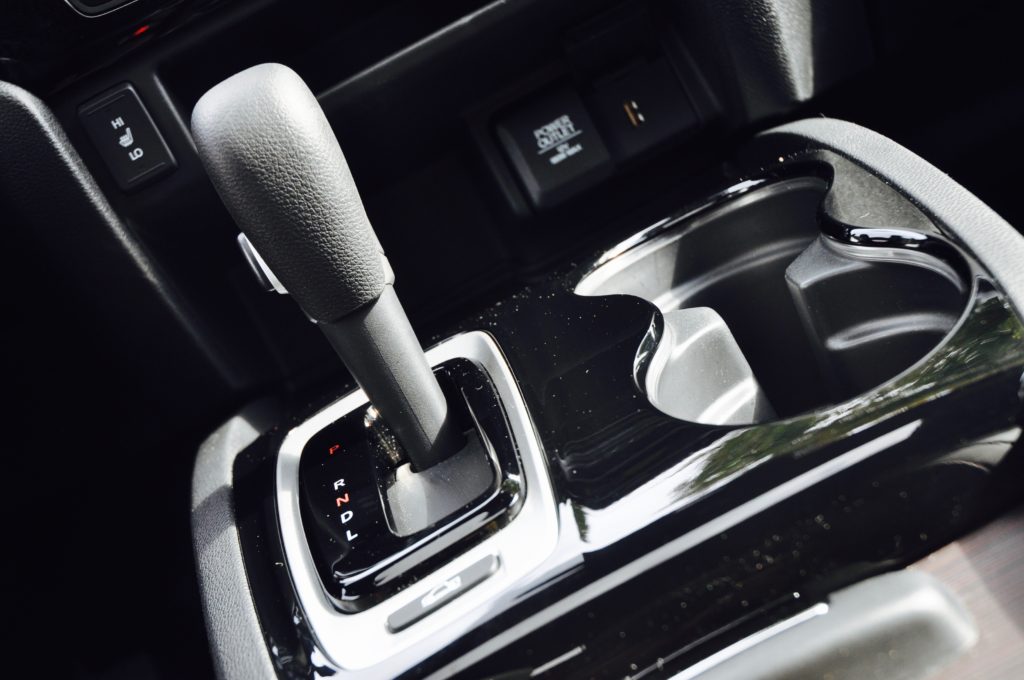 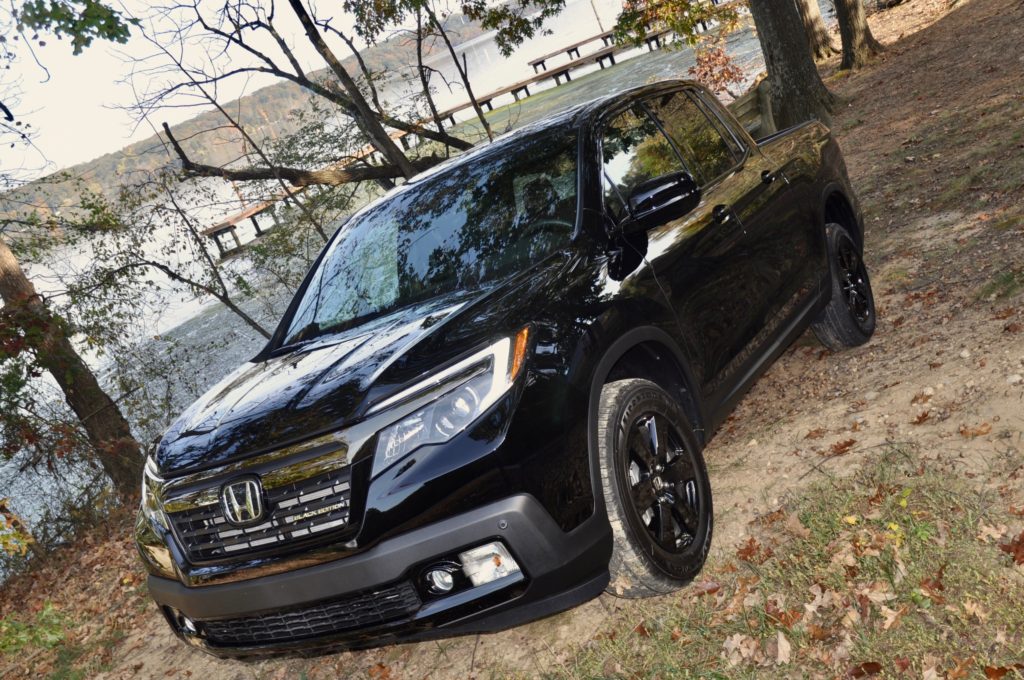 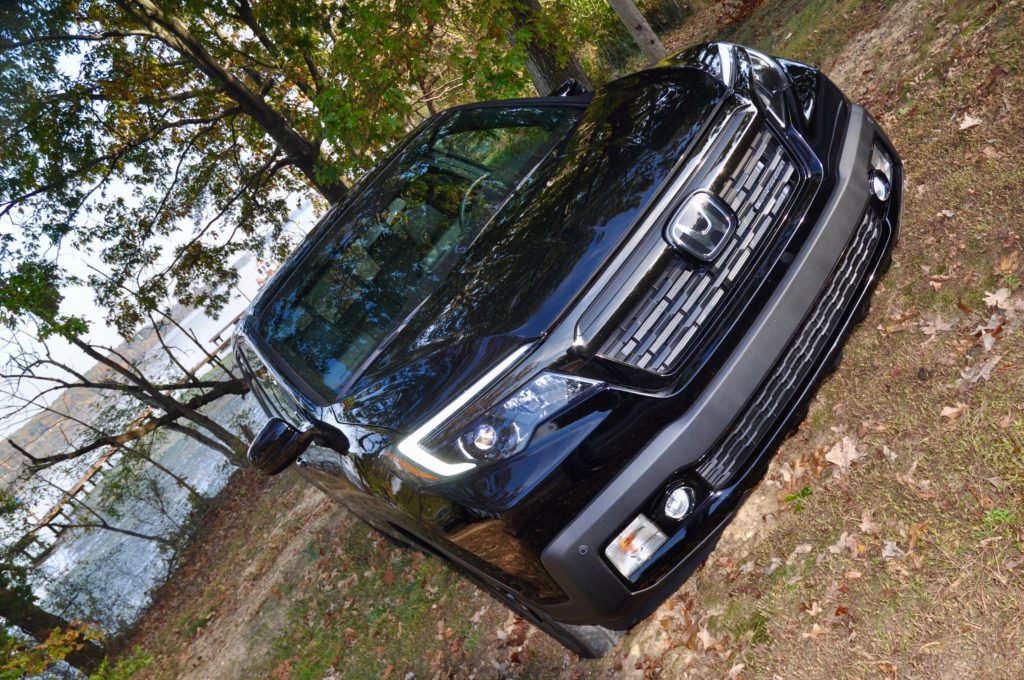 Combining these technologies, the 2017 Ridgeline AWD Black Edition targets the highest possible safety ratings from both the NHTSA and IIHS: an NCAP 5-star Overall Vehicle Score and an IIHS TOP SAFETY PICK+ rating and top marks (NCAP 5-star and IIHS GOOD) in all crash test modes. 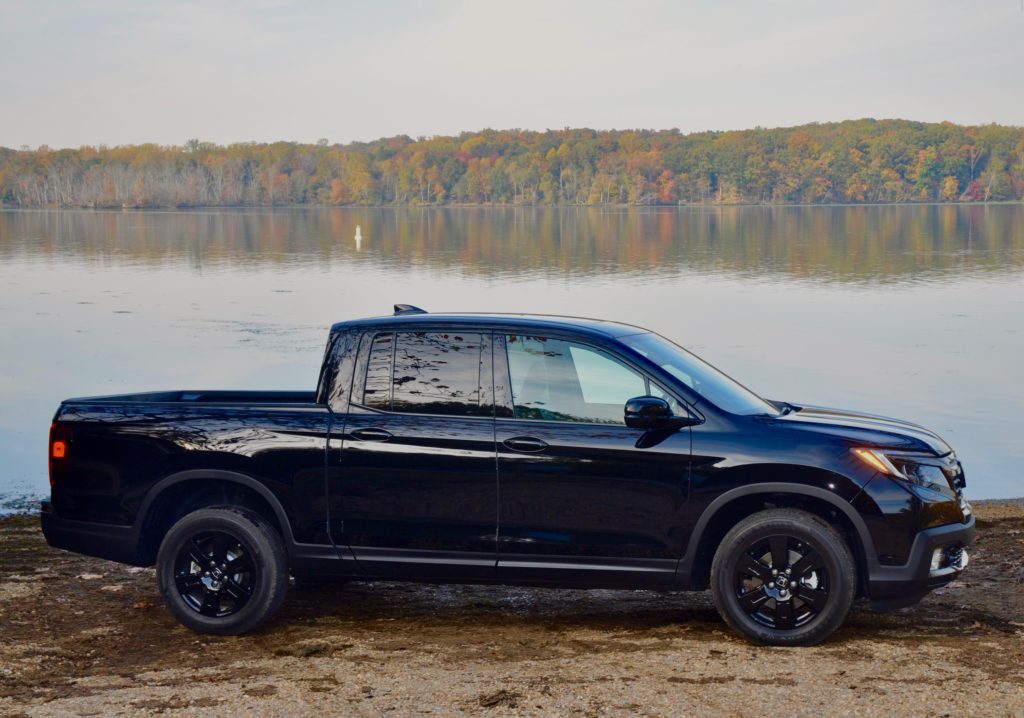