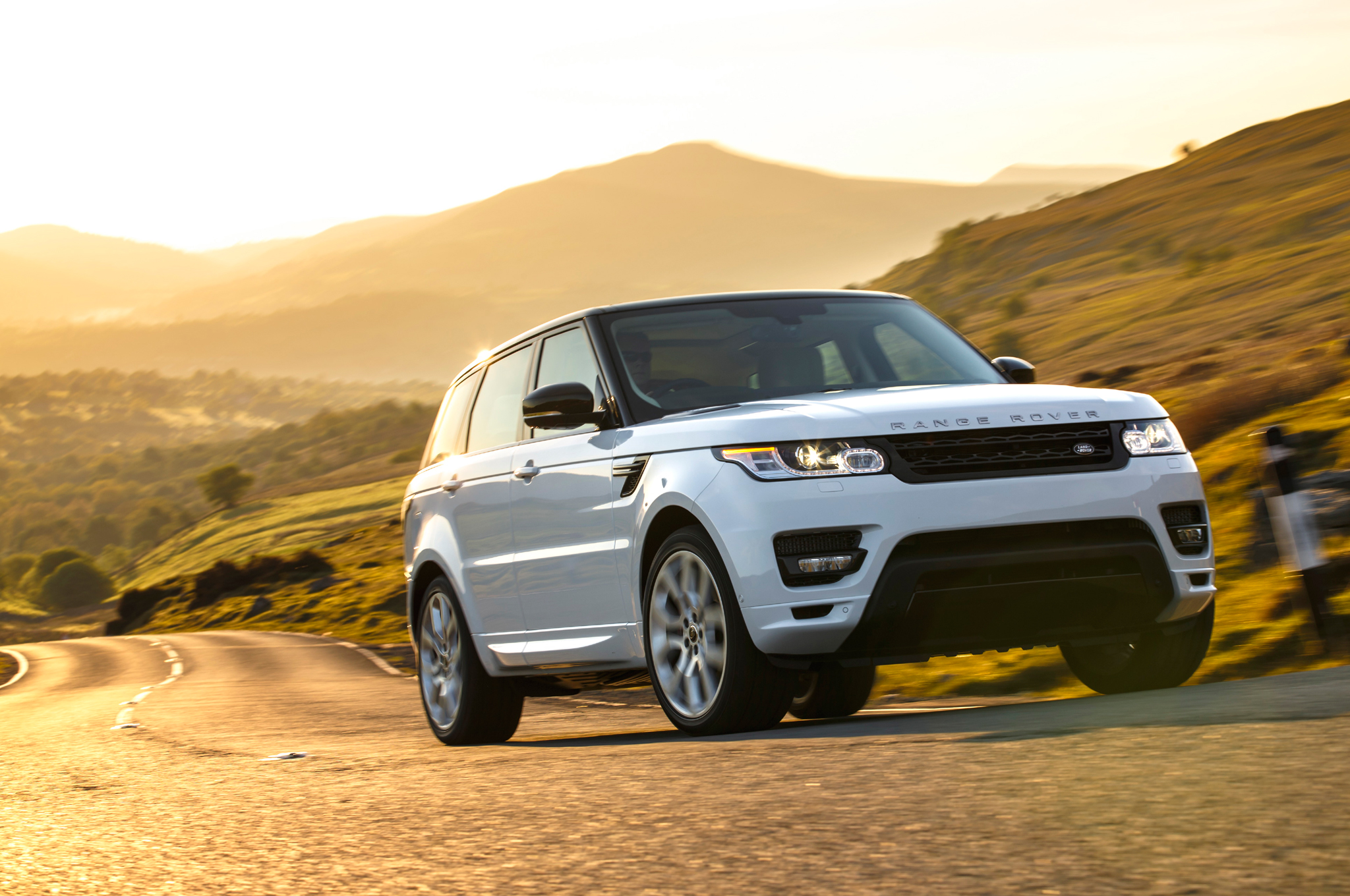 For 2014, Land Rover continues to be a brand that is rolling downhill with the momentum of an Olympic Alpine skier. Or is it climbing uphill with the grip of big cat seeking prey? Either way, you’re covered, as this, the fastest Land Rover ever, eats asphalt and dirt roads with equal aplomb. 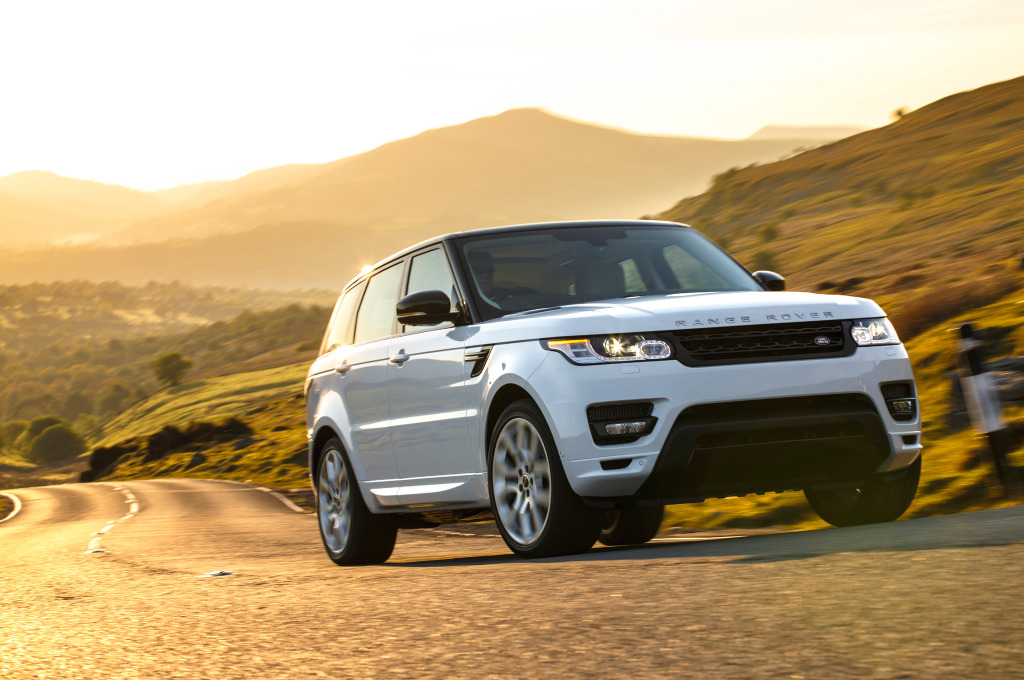 I’ve always admired this iconic British brand, as the first time I ever visited the African continent in 1982 the first SUV I saw was a new for then Land Rover Range Rover. The “Range” was stately and diplomatic, yet gave numerous clues that it was ready to handle tundra flawlessly while completing its diplomatic mission. And that was the Range. Once I saw numerous Defenders plying impossibly rutted roads, I knew that one day I’d want to own such a capable vehicle.

And while Land Rover is now owned by Indian corporation Tata, they’ve wisely allowed the Brits to do what they do best-continue to build some of the world’s best on-road, off-road vehicles.

Land Rover is split into two separate brands, Land Rover and Range Rover, with the former known as rugged and the latter exuding more of a luxury touch. But you wouldn’t want to challenge either off road. 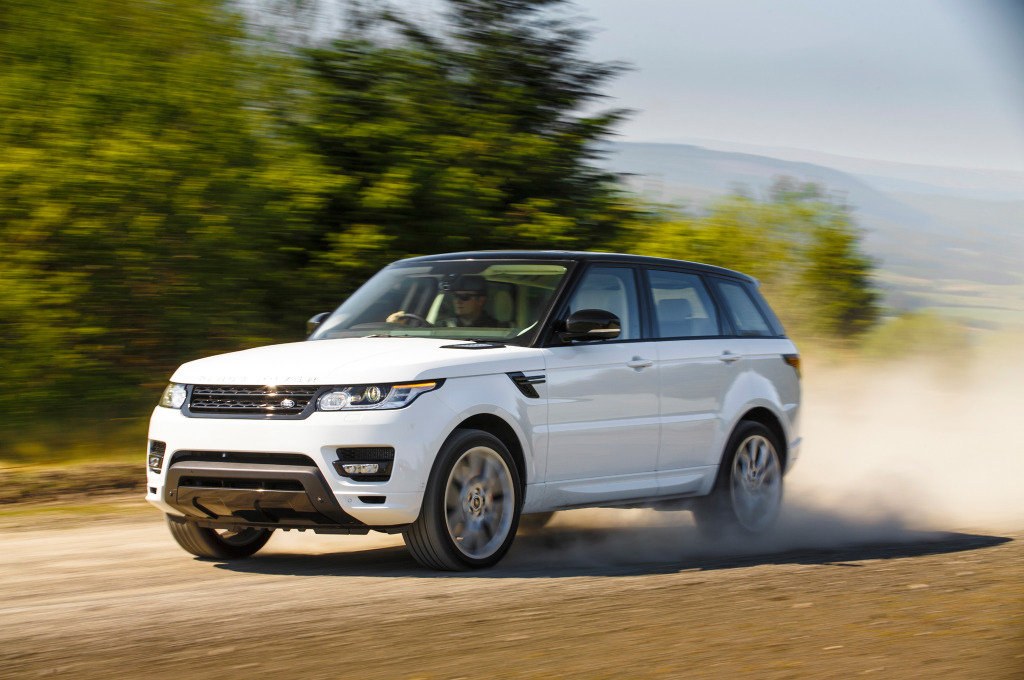 Where the previous gen Range Rover Sport was stocky compared to the Range Rover, the new model slots perfectly as it shares the new raked roof styling of the Evoque, but on a larger scale. The result is a design that looks built for speed, and given what Range Rover engineers have bolted in under the hood, it is indeed just that.

Pop the “bonnet,” and witness your choice of supercharged engines: a 3.0-liter V6 outputting 340 horsepower, or a 5.0-liter V8 churning out a massive 510 horsepower. Clearly, either will provide more than enough scoot to handle any situation, but having driven both during a recent national media launch, the V8 is the way to go as a full press on the throttle simply amplifies your already wide smile. 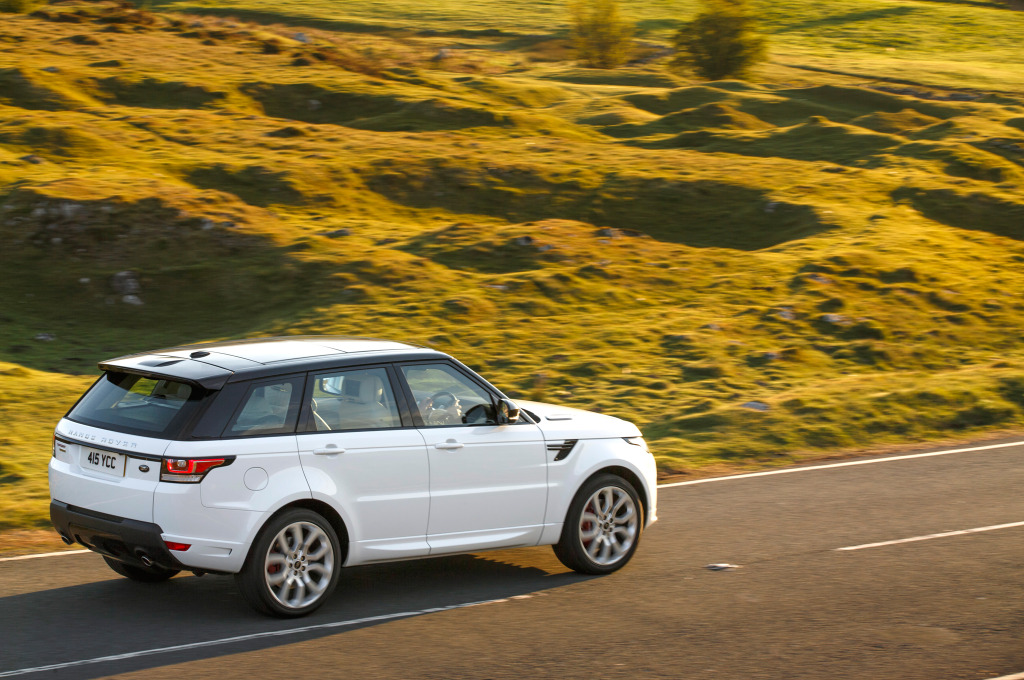 V6 models feature an innovative balance weight system to ensure smooth performance. With a weight reduction of about 800 pounds, the new 340 hp supercharged V6 Range Rover Sport is quicker than the previous model with its 375 hp 5-liter V8, delivering 0-60 mph in 6.9 seconds, a reduction of 0.3 seconds. And a full tromp on the throttle is rewarded with a sporting engine note, emphasized by using a sound symposer on the intake system. V6 economy with a V8 snarl is the result of this innovative system. 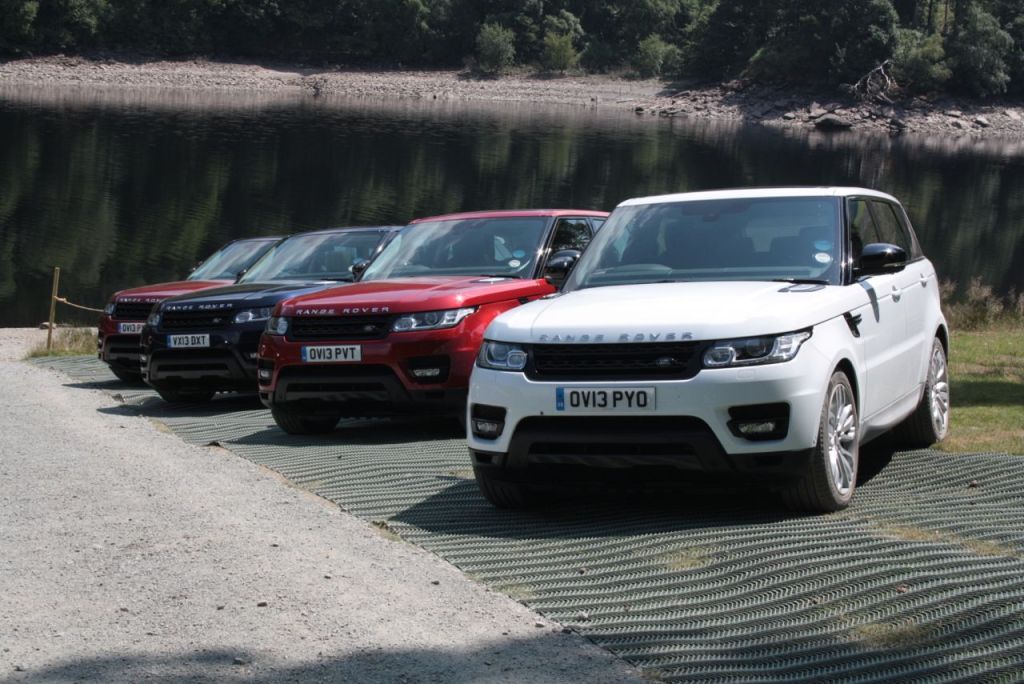 On the road, it’s pretty amazing to watch people’s reactions to any Range Rover, which are looked upon with decided reverence. Add another 15-20 in a row during a press launch, and Range Rover should be on the hook for chiropractic bills for myriad necks snapped along the drive route. Pull into a rest area, and people descended on the Sport as if it was the next Noah’s Ark.

To meter all of the power both engines possess to the road, both Range Rover Sport engines are paired with 8-speed automatic transmissions, tuned by Land Rover engineers to combine smooth shifting with enhanced fuel economy. Controls include the console mounted shifter, plus the option of steering wheel-mounted paddle-shifters. Either system enables the driver to take control of gear shifting manually – the transmission will also accept multiple downshifts, maintaining a smooth transition between ratios.

As stated earlier, what true Land Rover would be such without go-anywhere capability? The new Sport continues the legendary tradition offering a choice of two full-time intelligent 4WD systems, each able to deliver outstanding traction on even the most challenging low-grip surfaces.

A two-speed transfer case system is available, with a low-range for the most demanding off-road conditions, and features a 50:50 percent default front to rear torque split. Optimum traction is maintained through an electronically controlled multi-plate clutch in the center differential, which can distribute torque between the wheels at any ratio between 100 percent front and 100 percent rear. This is combined with responsive and sophisticated electronic traction control systems. The transfer case offers selectable high and low range with shift-on-the-fly capability at speeds up to 37 mph.

The standard system, which is 40 pounds lighter, features an all-new single-speed transfer case with a Torsen differential. Its 42:58 percent default front to rear torque split is designed to provide a rear-wheel drive bias, allowing for almost sports car like drive dynamics, while maintaining off-road performance capability. The Torsen center differential constantly varies torque distribution between 62 percent front and 78 percent rear depending on conditions and grip available. The traction control system has been tuned to work in conjunction with the differential to deliver excellent traction in all conditions.

To maximize traction and stability in extreme conditions, a Dynamic Active Rear Locking Differential is available in combination with the dual-range (high/low) 4WD transfer case. The locking rear differential has been engineered to work in conjunction with the electronic torque vectoring system.

To save weight, increase performance and enhance fuel economy, the Sport now features all aluminum construction. The unibody structure helps to reduce the combined body/chassis weight by about 800 pounds compared to the previous steel unibody mounted on a full frame chassis. The result is a lighter yet stronger structure. The body has been engineered to withstand the same punishing off-road use as all Land Rover vehicles. The joints in the shell are riveted and bonded together using aerospace techniques adapted for automotive use. Traditional construction methods, such as spot welding, are not required. The Range Rover Sport is constructed in an aluminum specific body fabrication shop.

Inside, the Sports Command Driving Position combines confidence and control, but with a sporting, less upright seating position similar to that in the Evoque. This driving position offers an elevated view of the vehicle’s surroundings, and the new model retains excellent visibility over the hood. Meticulous attention to vehicle packaging and the pillar design have improved all-round visibility. All Range Rover models are developed with headroom targets that take into account head movements that occur in off-road driving.

The plus is very tall drivers, like myself, benefit from this additional headroom. Overall, the interior experience with the new Sport is just superb. To enhance the sportier feel of the new Sport, the center console is mounted higher than before, positioning the controls closer to the driver and the smaller-diameter, thicker-rimmed steering wheel, vertical gear shifter and seats with side bolsters support the sporting ambience.

Soft touch surfaces, such as on the dashboard, combine with real metal accents to provide upscale interior execution. To view Sport performance, you can select an optional 12.3-inch high-resolution TFT virtual gauge display. Standard is an instrument cluster with analog gauges with a 5-inch TFT display. On the center console, an 8-inch high-resolution touchscreen displays infotainment and secondary functions.

The screen designs on both displays create the impression of 3D surfaces, beautifully lit with subtle chrome detailing. Each display is able to adapt its content according to the driving situation. For example, in Dynamic mode, the two primary dials in the 12.3-inch display adopt a sporting red color scheme, with the current gear position presented prominently between the two dials.

The control layout has been significantly simplified, with 50 percent fewer switches than before. The intuitive approach is reflected in the other major controls, such as the vertical gear shifter, the rotary Terrain Response 2 control, the simplified climate control dials and the twin five-way toggle switches and auxiliary functions on the steering wheel.

Land Rover touts itself as the world’s most capable off road vehicles. This is quite a statement considering the competition from Jeep and Mercedes-Benz. After slogging the high end Range Rover and now the Ranger Rover Sport through incredibly difficult and potentially dangerous off road conditions, I’d be inclined to agree with their lofty assessment. We traversed water, mud, rocks and loose gravel with relative ease. And when you are doing it within the confines of a luxury cabin it makes the whole experience almost surreal.

The Sport continues with the next generation of Land Rover’s Terrain Response system, Terrain Response 2. Terrain Response 2 features an “Auto” setting that uses sophisticated systems to analyze the current driving conditions, and automatically select the most suitable terrain program. The new system is able to switch completely automatically between the five settings: General, Grass/Gravel/Snow, Mud/Ruts, Sand and Rock Crawl. Each setting optimizes drivability and traction by adapting the responses of the engine, transmission, differentials, and chassis systems to match the demands of the terrain.

And while it functions automatically, Terrain Response 2 will also provide the driver with additional advice, such as when to select low range or raise the vehicle to off-road ride height, when the system calculates that it is necessary.