VW: Opening A New Gateway To The Future - Carsfera.com 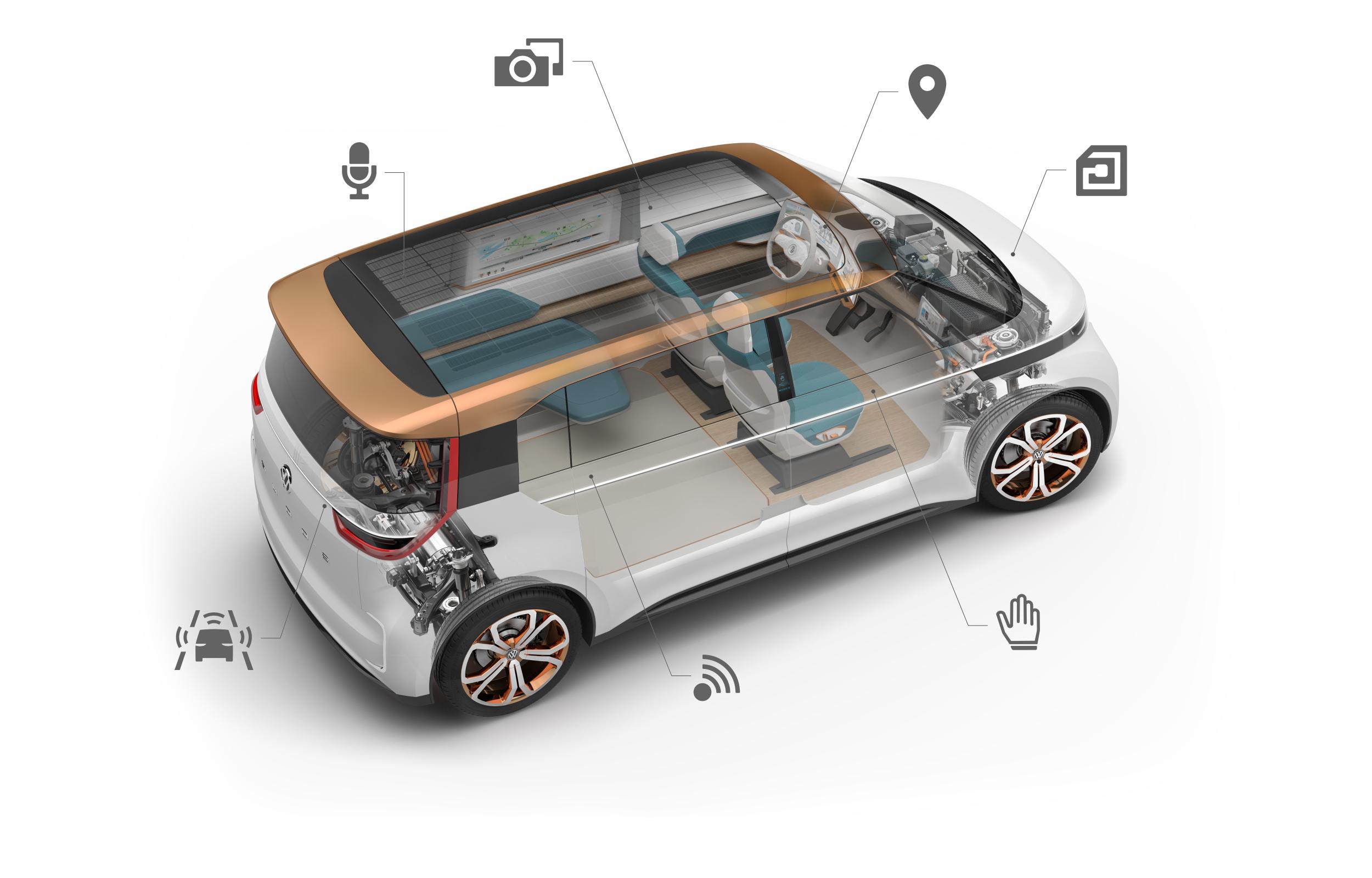 VW: Opening A New Gateway To The Future

Building on the momentum from the brand’s first appearance in 2015, Volkswagen is opening a new gateway to the future at the 2016 Consumer Electronics Show (CES) in Las Vegas. The time machine in this case is a zero-emissions, avant-garde van dubbed BUDD-e. This is the first vehicle based on the all-new Modular Electric Platform (MEB) that is designed specifically for plug-in vehicles. With a range of up to 373** (estimate based on the New European Drive Cycle (NEDC), 233 miles estimate when based on EPA drive cycle) miles coupled with a charismatic, iconic design, this vehicle successfully incorporates Volkswagen’s heritage while providing a glimpse into the brand’s future. 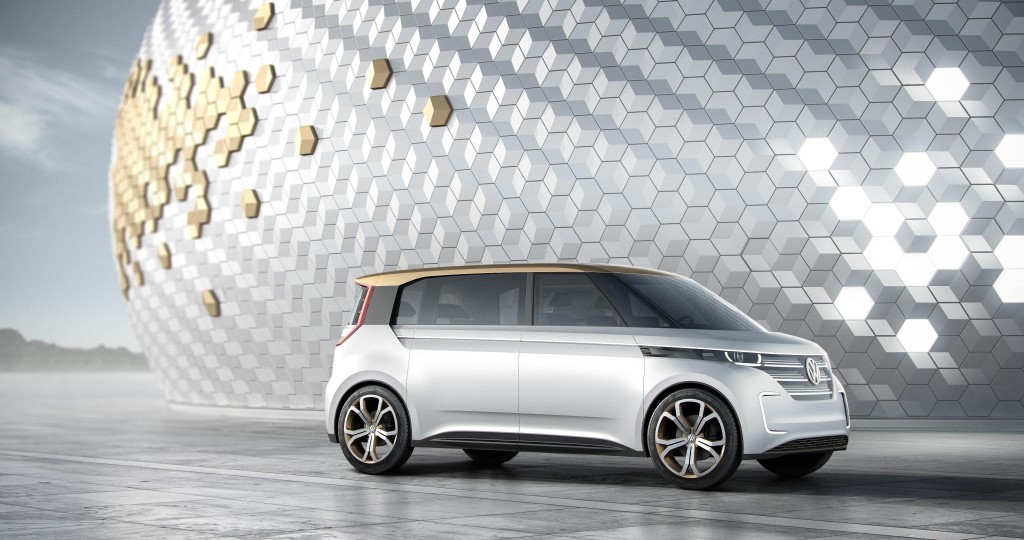 Completely and thoroughly networked, BUDD-e is a mobile interface which connects the vehicle with the world around it. With the BUDD-e Volkswagen has developed a vehicle that is more thoroughly connected with its surroundings than any car before it. An integral automotive component in the Internet of Things (IoT), BUDD-e is capable of seamlessly communicating with your Smart Home or office. Featuring next-generation infotainment technologies and offering an advanced new method of operation and information processing, BUDD-e turns travel into a fully interactive, intuitive experience. Utilizing the latest in user interface innovation, touch and gesture control merge seamlessly and result in the removal of switches and buttons inside the cabin, individual displays that blend into large infotainment panels, and digital screens instead of analog mirrors. The convergence of these new, interactive infotainment and operating systems provides a view of potential applications in Volkswagen products in the next decade. 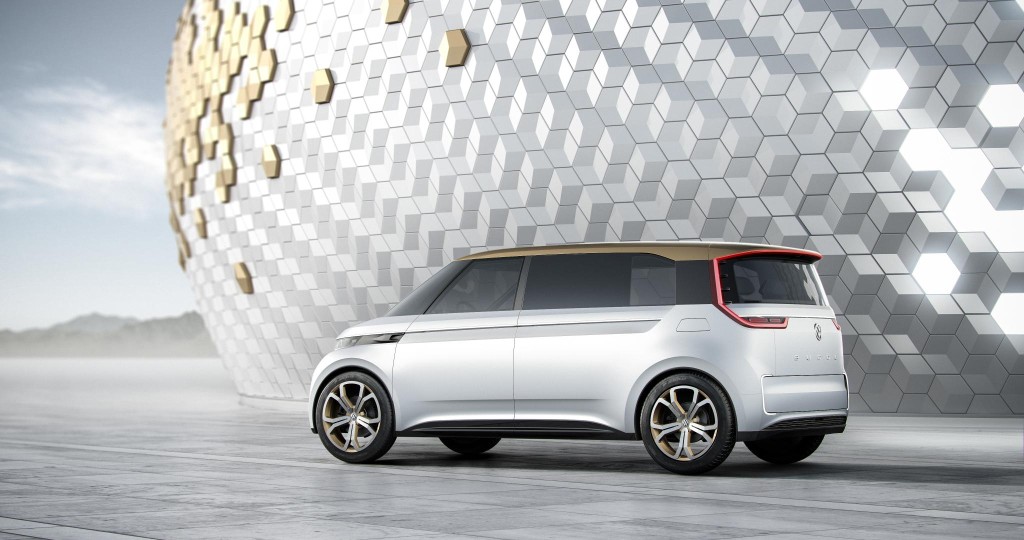 With BUDD-e, Volkswagen demonstrates what electric mobility could be like by the year 2019. Volkswagen’s new MEB platform will enable a series production car to have pure electric range that is on par with today’s gasoline-powered cars by the end of the decade. The time required to charge the batteries to 80 percent of capacity is anticipated to be reduced to about 30 minutes by then, marking an operational breakthrough for EVs.

BUDD-e is the first concept car developed by the Volkswagen Group that is underpinned by the new Modular Electric Toolkit (MEB). This architecture heralds a fundamental change in electric cars and ushers in a revolution in automotive technology, leaving today’s fossil-fuel powered internal combustion engines and drivetrains in the past. This significant innovation will lead to huge changes in the development of electric-powered Volkswagens in the years to come, from body and interior design, to packaging and drive characteristics.

The new platform is designed to have the space for electric drive components and large batteries while maintaining interior space and driving dynamics. MEB will allow for spacious interiors with the smallest possible footprint to enable easy and nimble transportation. In addition to their space, MEB vehicles will offer high levels of functionality and networking thanks to the new vehicle architecture, instrumentation, and operating systems. New and enhanced assistance systems will provide passengers with safer transport.

Dynamic performance is, and will remain, a key part of Volkswagen’s DNA, and MEB vehicles will be no exception. With a focus on optimal balance, future VW vehicles based off the platform will offer the kind of agility, strong acceleration and handling that VW customers have come to expect. New battery and electric drive componentry will enable inexpensive access to e-mobility: a much longer purely electric range will allow these vehicles to become the primary transportation in many consumers’ households.

The new MEB delivers a drivetrain architecture that is specifically tailored for the integration of compact electric motors and high-performance, highly-efficient batteries. The 101 kWh battery is flat, to save space, and integrated into almost the entire vehicle floor. It powers two electric motors, one to drive each axle. 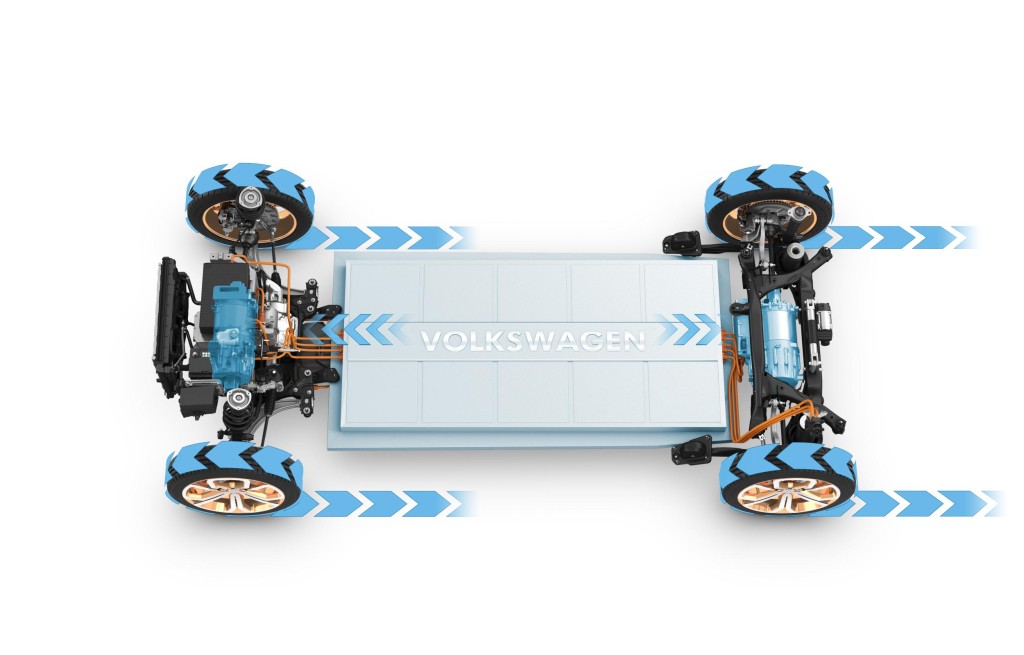 The front and rear motors power all four wheels and enable a top speed of 93 mph. The total range of up to 373** (estimate based on the New European Drive Cycle (NEDC), 233 miles estimate when based on EPA drive cycle) miles is achieved on a full charge, putting the BUDD-e on a level playing field with today’s gasoline-powered cars. Like today’s electric vehicles, the BUDDE-e offers several levels of plugged-in charging with the added benefit of cordless inductive charging.

Another benefit of the new MEB is entirely new packaging opportunities, highlighted throughout the BUDD-e concept. One significant enhancement is illustrated by the arrangement of the heating and air conditioning unit. For instance, the innovative new heating and air conditioning unit has been completely integrated in the front end of the car which allows for significantly more available space, improves air quality (thanks to larger and more robust filters), and results in a reduction of fan noise inside the cabin for excellent acoustics.

The concept van is 181 inches long, 76.3 inches wide and 72.2 inches high, placing it between two very successful Volkswagen models sold in Europe, the Touran and the Multivan T6. Due to its generous width, relatively long wheelbase (124.1 inches), and very short overhangs (27 inches at the front and 28.9 inches and the rear), the BUDD-e’s proportions are very appealing. 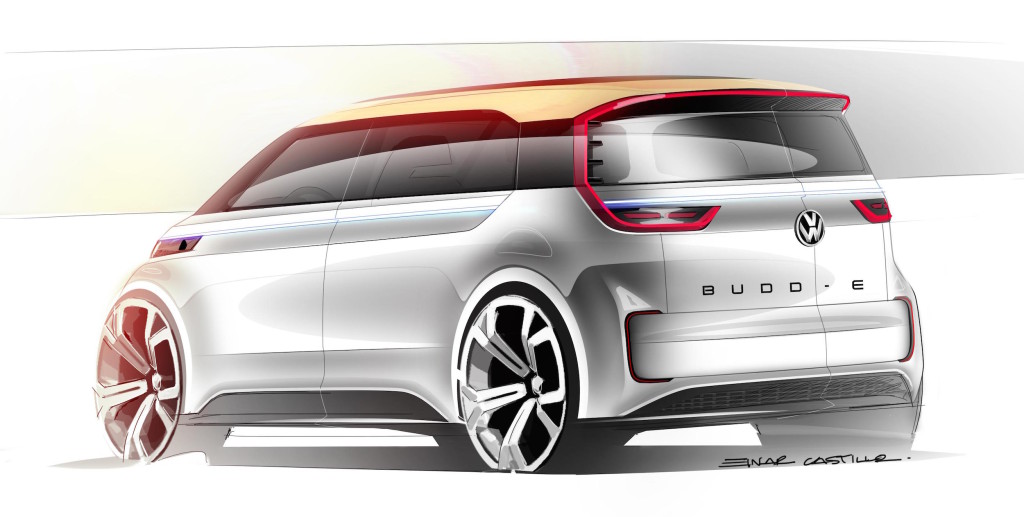 Inspired by the iconic charm of classic Volkswagen vans, the BUDD-e’s design focuses on the aesthetics of functionality. Practical, clean, innovative, powerful and appealing, the concept has a two-tone color scheme, with its body painted in “Nevada White” below the window edge, and the roof in “Phoenix Copper.”

The front end design of the BUDD-e is unmistakably Volkswagen. The area around the VW logo can be backlit by integrated LED modules in a number of different ways, creating an external ambient light that tapers towards the sides, and a narrow stripe that continues all the way around the van. The main headlights, which also use LED technology, are placed high up, while transparent surfaces to the left and right of the headlights house integrated LED indicators that carry into the vehicle’s silhouette. Viewed from the front, the V-shaped design of these styling cues resemble elements from the original Volkswagen Microbus and Beetle, with a futuristic flare that provides an entirely new interpretation of the brand’s design DNA.

The van’s silhouette is characterized by a flat and elongated roof line, long windows with glazed A-pillars, 21-inch aluminium-alloy wheels, and light modules that start at the front and reach around the vehicle’s flanks. A narrow LED stripe, which runs all the way round the car, acts as a character line and delivers exterior ambient lighting. The silhouette comes across as especially clean, thanks to an absence of door handles and wing mirrors, as these components have been completely redesigned and replaced by electronic solutions. Flared D-pillars, which also contain the LED strip for the rear lights, accentuate the design further.

At the rear, the BUDD-e’s aerodynamic design promotes airflow through the gloss black D-pillars, reducing aerodynamic drag and simultaneously optimizing rear downforce. Its clean and iconic design continues all the way to the rear, with a large tailgate, reminiscent of the original Volkswagen bus. LED taillight strips reach up into the D-pillars, and the circumferential ambient light give BUDD-e a unique design unlike anything on the road. Last but not least, a C-shaped LED signature surrounds the extractable Drop Box. 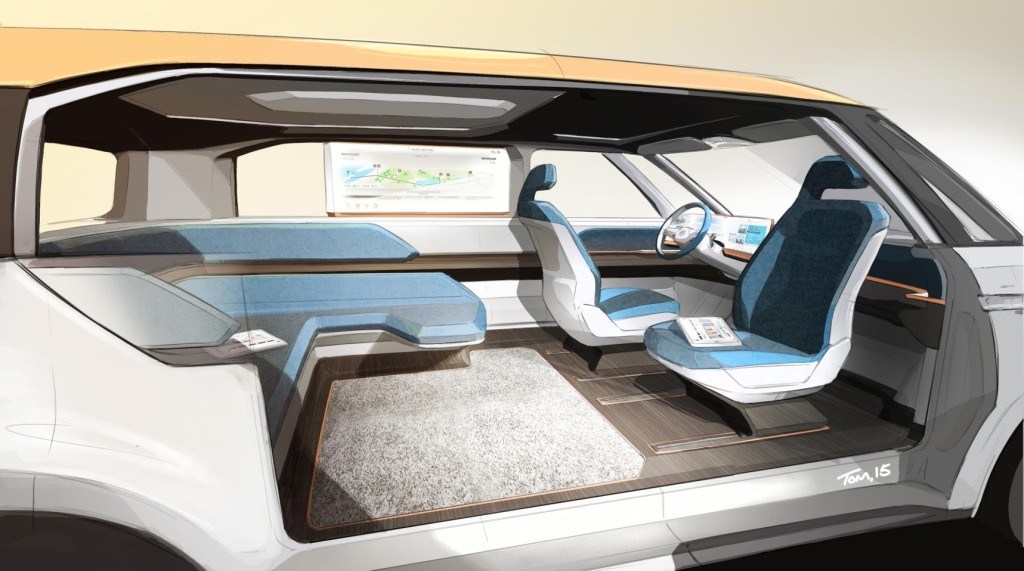 The interior style of the BUDD-e is characterized by a completely new and innovative human-machine interface—the instrumentation and operating concept of the future. The design is extremely clean and intuitive to use. The technical architecture of the infotainment and control systems, as well as their design, make a quantum leap akin to the jump from flip phones to smartphones or from analog timepieces to smart watches.

With BUDD-e’s interface design, Volkswagen eliminates the traditional distinction between the electronic instrument cluster in front of the driver and the center console infotainment system. In a move towards comprehensive digitalization and the individualization of the driver’s workplace, these two areas have been merged to form a single information hub.

The idea behind the navigation panel is rooted in the car’s original function: driving. Behind the panel resides a sliding 3D navigation map with graphics, which becomes the matrix of an interactive human-machine interface (HMI). This is accomplished via two physically separate displays that blend into one, both optically and functionally.

The first component, Active Info Display, is a freely programmable instrument cluster located in front of the driver; the second is a head unit which was once a separate screen for the infotainment system. Active Info Display captures the conceptual focus on drive information, while the head unit caters to the infotainment needs of all passengers on board. Both of these areas form a united visual and textual environment, as the navigation graphics and the arrangement of media content such as the display of Points of Interest (POI), playlists, apps (App-Connect) and online services (Car-Net) are freely configurable. In addition, the main points and content can also be swapped between the Active Info Display and the head unit.

All of BUDD-e’s systems are operated intuitively by gesture control, touchscreen (displays and touch slider) or voice control. The driver can choose between various intuitive control modes (multi-modal interaction). For example, a simple “Hello BUDD-e” activates the vehicle’s voice control. The system also offers completely natural speech interaction. For example, if the driver asks “turn the heat up a bit, please”, the car will respond immediately and appropriately. The system is also able to locate the passenger giving the commands, and react accordingly. If, for instance, someone sitting in the left rear seat says “It’s too hot here”, BUDD-e can immediately lower the temperature in that passenger’s zone.

The BUDD-e’s freely programmable instrument cluster is an evolution of the Active Info Display first introduced by Volkswagen in 2015. A 12.3-inch curved display with a surface consisting of three individually configurable sections is centrally positioned, right in front of the driver. 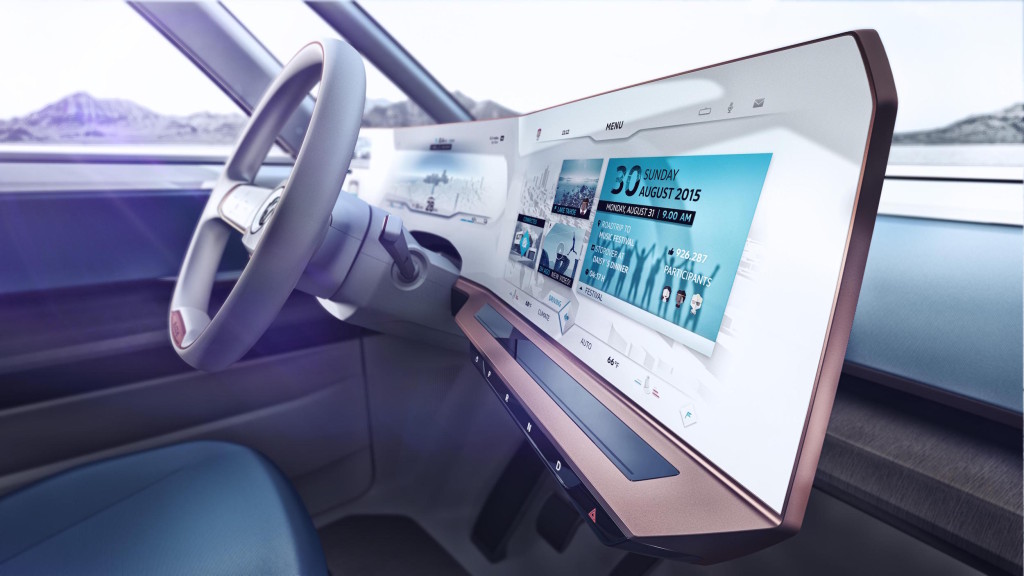 Most modern day smart home functions are controlled using smartphone apps, produced by various manufacturers. Volkswagen has found a solution that allows users to access smart home functions while remaining focused on the road ahead. With App-Connect—Volkswagen’s advanced smartphone integration platform—the BUDD-e makes it possible to control certain “Connected Home” functions from the car, while driving. In cooperation with Korean electronics firm LG, Volkswagen will show how it is possible to obtain information about a smart fridge from the BUDD-e. It’s also possible to put the whole house into an energy-saving sleep mode while still in the vehicle. In the future, the BUDD-e will also automatically turn on lights in and around the house as soon as it approaches through home net automation.

At CES, Volkswagen will demonstrate, together with the German manufacturer Doorbird, how MirrorLink™ can be used in connection with the newly developed Home-Net Viewer. The interface can display images from cameras mounted in and around the house on one of the car’s multiple screens (a function equally conceivable with future Apple CarPlay® and Android Auto™ applications). If a visitor rings the doorbell at home, a picture of them, taken by the home camera, is sent to the screen of the infotainment system. The functionality even makes it possible to speak to the visitor using the car’s hands-free kit and, if desired, open the door for them.