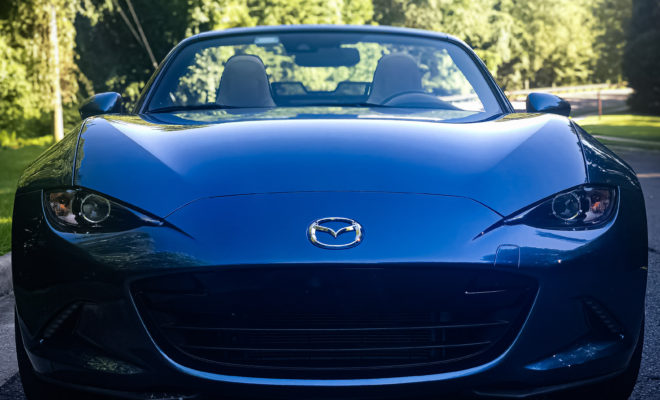 The 2019 Mazda MX-5 Miata has over the years become synonymous with being a fun car to drive. The two-door coupe has improved dramatically since the 2016 model. However, the 2019 model is the most powerful Miata to date because with it comes a couple major updates.

So, the question we’ve set out to answer in this review is if owners of the previous model should consider upgrading?

Mazda has pulled out all the stops with the 2019 Miata throwing in a beastly 2.0-liter engine, capable of redlining at a massive 700 rpm. The 181 hp engine delivers 151 lb-ft of torque and is paired with a standard six-speed transmission available in both automatic and manual options.

This time around the Miata has done away with the dated single-mass unit in favor of a dual-mass flywheel. Other welcome additions include a telescoping steering wheel, a rear-view camera and the fact that it looks sexier. However, despite Mazda’s best efforts the car is still 7 pounds heavier than the previous model. Though the good news is that all that power hasn’t caused fuel economy to drop but rather improve to an impressive 26/34 mpg for city and highway driving respectively. On the automatic you can expect to get 26/35 mpg for city and highway driving.

The Grand Touring model (the one we are reviewing) comes with sharper handling because of the addition of the GT-S package. The package includes Bilstein shocks, a sport-tuned suspension, front strut tower brace, and a fairly limited but capable slip differential. Interestingly all of these were previously available with the Club trim.

The Miata also comes with automatic emergency braking and forward-collision warning. These are two safety features you must have and the biggest reason to opt for the Grand Touring over the other cheaper trims.

The cabin of the Miata Grand Touring hasn’t changed all that much over the years. So, as expected, the center console is as compact as the car itself with the glove box tucked in between the seats. The 12-volt power outlet is hidden somewhere in the passenger footwell. We also missed not having door pockets.

Other than that the cabin feels comfortable, and even if you’re 6.6ft tall it’s not cramped at all. However, it would have been great if Mazda engineered the design so that there were more places to store stuff.

The 2019 Mazda Mx-5 Miata Grand Touring is a true sports car, and it is for people who have always wanted to own a Corvette or Porsche but couldn’t afford it. Don’t take this the wrong way the 2019 Miata isn’t a “wannabe” vehicle it just that it delivers everything you’ll want in a fun second car but without a hefty price tag.

Like all other similar size and type, fun cars to drive it is excellent for the weekend. However, it isn’t something that’s going to be a daily driver for most people. That said once you drive the 2019 Miata Grand Touring it is hard to forget!