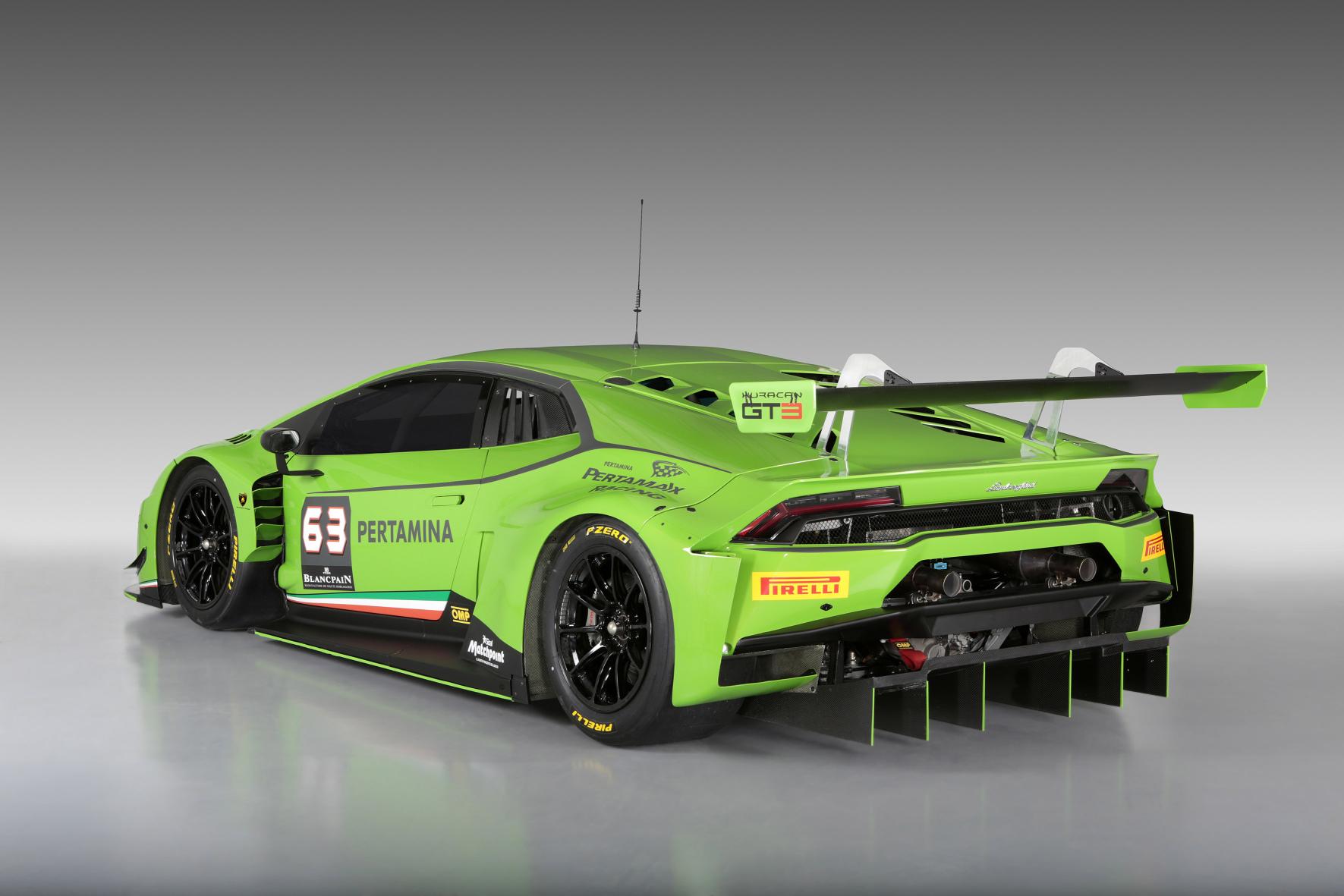 Automobili Lamborghini has presented the new Lamborghini Huracán GT3, in a world premiere at its headquarters in Sant’Agata Bolognese. The unveiling ceremony was carried out in the presence of media, customers and partners from around the world.

The GT3 competitor makes its debut following that of the new Huracán LP 620-2 Super Trofeo, which will be the protagonist of the Lamborghini Blancpain Super Trofeo in Europe, Asia and North America from this year. 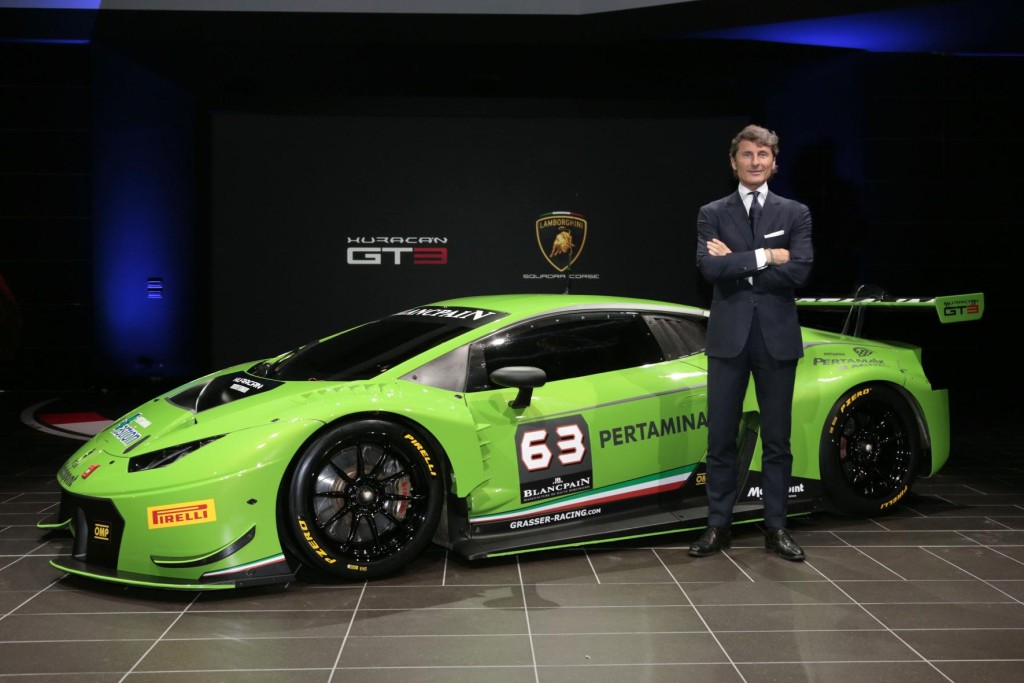 Starting in 2015, the Huracán GT3 will line up in the Blancpain Endurance Series that runs over five venues in Europe, among which is included the famous Spa-Francorchamps 24-hours race.

The growth and success of Lamborghini motorsports activities throughout the world has heightened its appeal to partners: the prestigious Indonesian oil and energy petroleum company PERTAMINA will be the official technical partner of Lamborghini Squadra Corse activities in the coming years.

”With the Huracán GT3, Lamborghini Squadra Corse takes a further step forward in the development and production of a race car for this category, which is among the most prestigious and challenging in international motorsport. Lamborghini is thus for the first time directly involved in GT motorsport activities with the in-house development of this new model,” declared Stephan Winkelmann, President and CEO of Automobili Lamborghini. ”We are proud and delighted to announce the new partnership with PERTAMINA, which will further support our motorsport activities.” 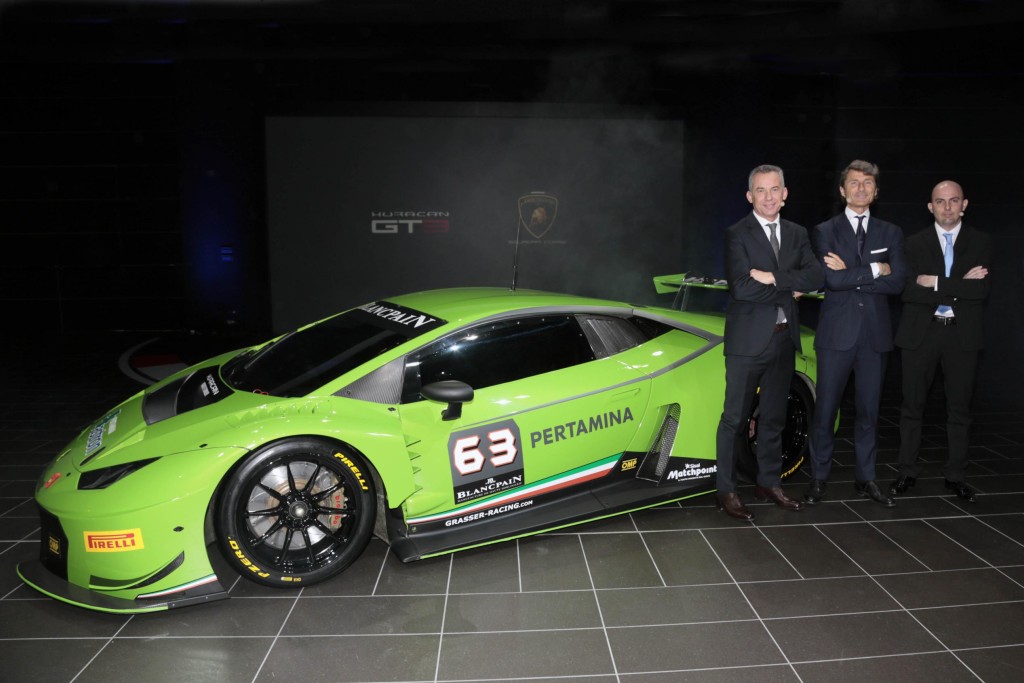 “We are proud to be the partner of Automobili Lamborghini as one of the world’s most prestigious super sports car marques. This cooperation confirms PERTAMINA’s position as the technology partner of Lamborghini Squadra Corse, connected to our vision of becoming a World Class Energy Company with the mission to expand our market globally,” said Ahmad Bambang, Marketing Director of PERTAMINA.

The Lamborghini Huracán GT3 is equipped with an Alu-Carbon chassis and a fully integrated FIA-compliant roll-cage. The subframe has been modified both at the front and rear to accommodate a high performance water radiator (front), and for a better positioning of the gearbox (rear), improving aerodynamics. The kerb weight is 1239 Kg with a 42/58 front/rear weight distribution. The final weight will be set by the FIA BOP.

The bodywork is in composite materials and, along with the aerodynamics, has been developed in collaboration with Dallara Engineering with the direct involvement of the founder Gian Paolo Dallara. Aerodynamics have been tuned to grant the best possible air flow penetration, and maximum adherence and traction in any condition on any asphalt. Efficiency has been improved thanks to the rear adjustable wing, adjustable front diffuser and louvres. The new aerodynamics also allow improved cooling of the braking system.

As for the Huracán Super Trofeo, the GT3 is equipped with new bodywork fast- fittings and equipped with a new, enhanced-performing engine and gearbox oil cooler.

Special attention has been given to safety, with the new Lamborghini Huracán GT3 equipped with a carbon frame 8862 specification seat; an OMP fire extinguishing system; and an innovative roof hatch which enables, in case of need, quick assistance by medical personnel through the roof of the car. Seat belts are provided by OMP, the fuel tank is an FT3 type and the pedals are adjustable.

Front and rear lights are LED. The new multifunction steering wheel has been re-engineered along with OMP.

The new rear-wheel drive Huracán GT3 adopts the V10 direct injection engine mounted on the road car, managed by a Bosch Motorsport control unit that also manages traction control, gearbox and the TFT display on the dashboard. All wiring and connectors are designed specifically for racing. The engine is fixed on the chassis by rigid mountings and is coupled with a sequential six-speed gearbox, according to FIA regulations, and a three-disc racing clutch. 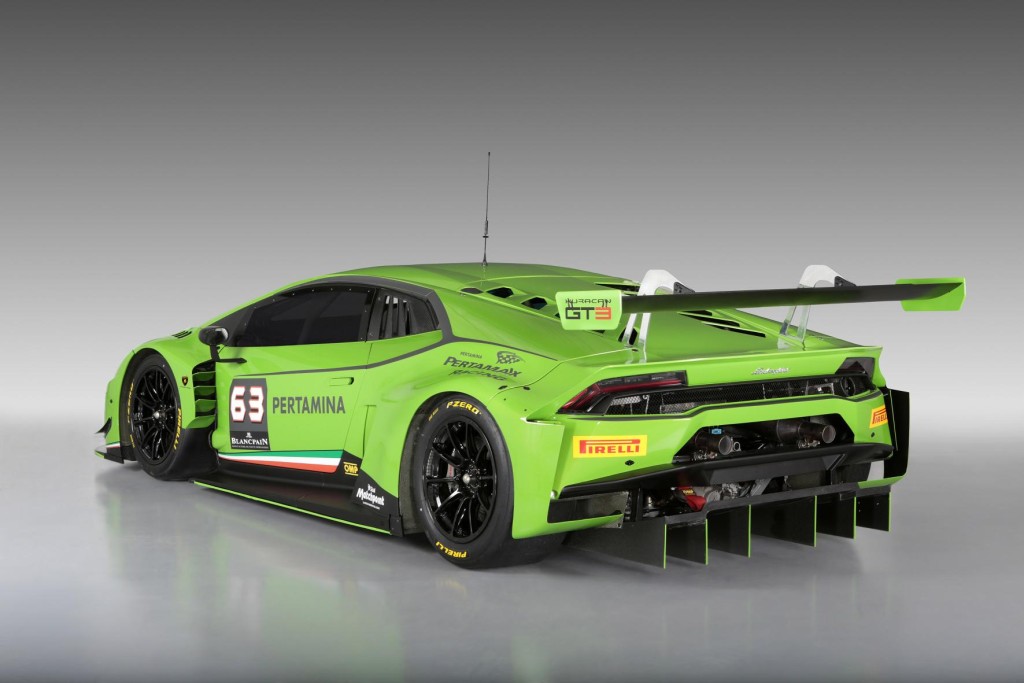 The braking system is made up by 380 x 34 mm steel discs at the front (6 pot), and 355 x 32mm steel discs at the back (4 pot), according to FIA regulations, equipped with Bosch ABS. This system features 12 different settings that can be actioned directly from the steering wheel, as can traction control. The tyre sizes are 315/680 at the front and 325/705 at the back. The car is equipped with a pneumatic lifting system.

Lamborghini’s newest raging bull race car has already made its track debut in development tests in recent months, under the supervision of head of motorsport Giorgio Sanna. ”The first GT3 car from Lamborghini will allow talented young drivers the opportunity to contest a Lamborghini in competitions such as the challenging 2015 Blancpain Endurance Series. This season will be an important one for us to gather experience from a category as demanding as GT3, but at the same time we are offering a competitive product to our customers. It will be a busy year, as the Huracán LP 620-2 Super Trofeo will also debut in our Lamborghini Blancpain Super Trofeo series in Europe, USA and Asia.” 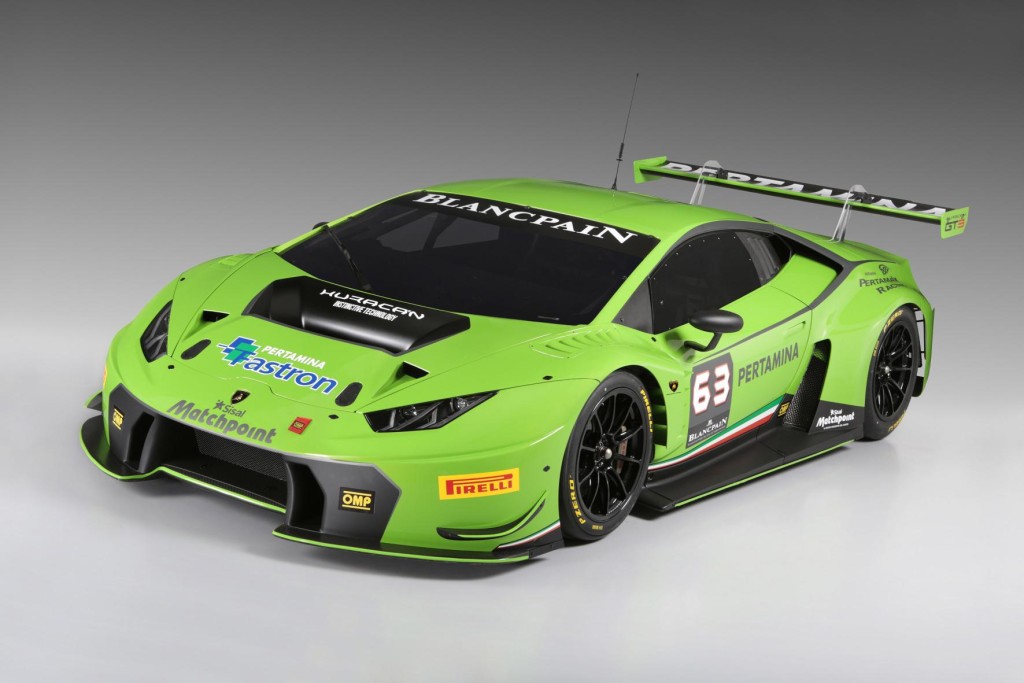 Working alongside them will be three young talents from Lamborghini’s Young Drivers Program: Giovanni Venturini (ITA), Jeroen Mul (NED) and Andrew Palmer (USA). All three have been promoted to the Lamborghini Squadra Corse GT3 Junior Team. This new program features a step up from the Young Drivers Program, with the aim of selecting the best talents to be involved in testing sessions and GT3 racing.

The Italian Edoardo Piscopo and the Serbian Milos Pavlovic have also been promoted to official test drivers for Lamborghini Squadra Corse. Winners of both the 2014 PRO Class in the European Lamborghini Blancpain Super Trofeo and the World Final, they will be in charge of the GT3 car’s development across the world.