The New Generation of 911 Turbo is Here - Carsfera.com 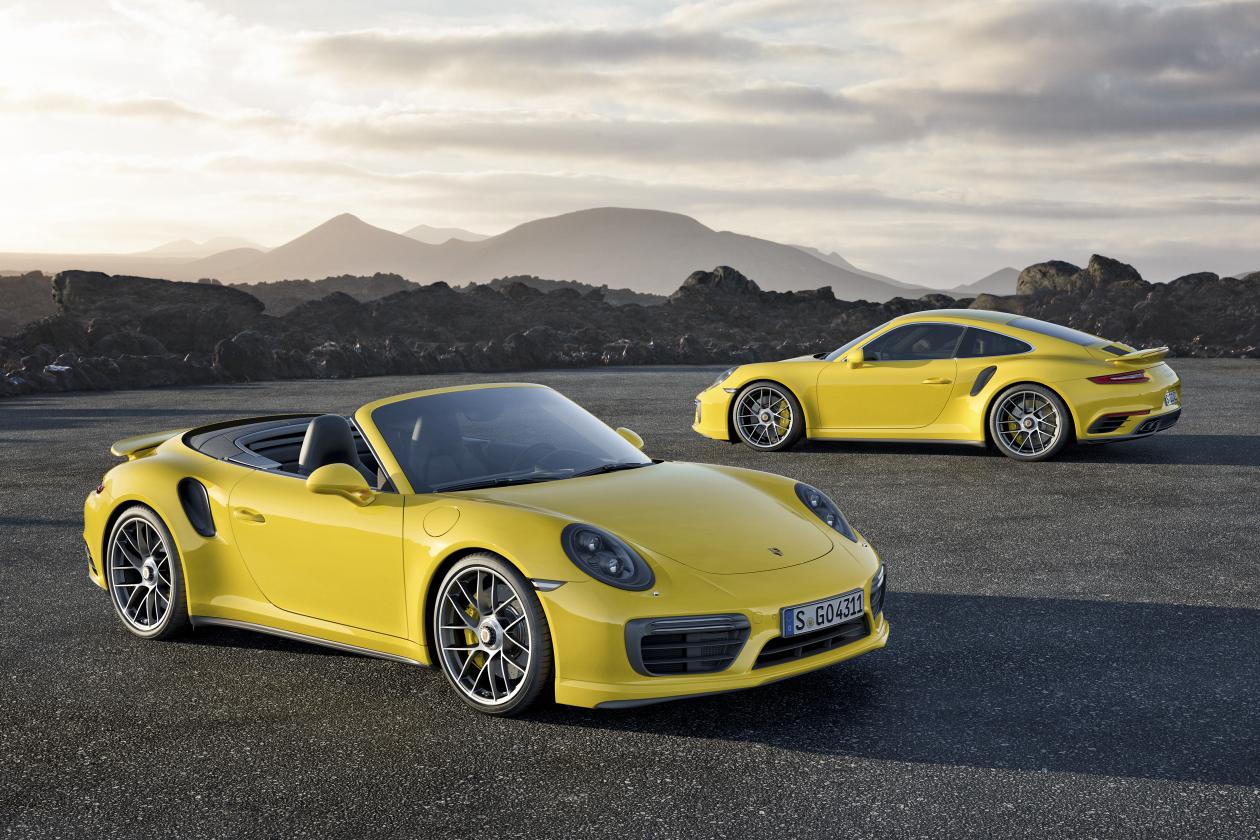 The New Generation of 911 Turbo is Here

Porsche will be off to a powerful start in 2016 when the 2017 911 Turbo and 911 Turbo S make their debut at the North American International Auto Show in Detroit in January. The top-of-the-line 911 models will be available in both coupe and convertible body styles and are equipped with engines offering 20 horsepower more than before, a sharper design, and enhanced features. The 3.8 liter twin-turbo six-cylinder engine powering the 911 Turbo now develops 540 hp. The increase in horsepower is achieved through modified intake ports in the cylinder heads, new fuel injectors, and higher fuel pressure. The 911 Turbo S now makes 580 hp thanks to new turbochargers with larger impelle. In addition to a higher maximum torque (553 lb.-ft. in overboost compared to 523 lb.-ft. on the Turbo), the Turbo S also has a higher redline (7200 rpm instead of 7000). Porsche is still the only manufacturer to use turbochargers with variable turbine geometry in gasoline engines. 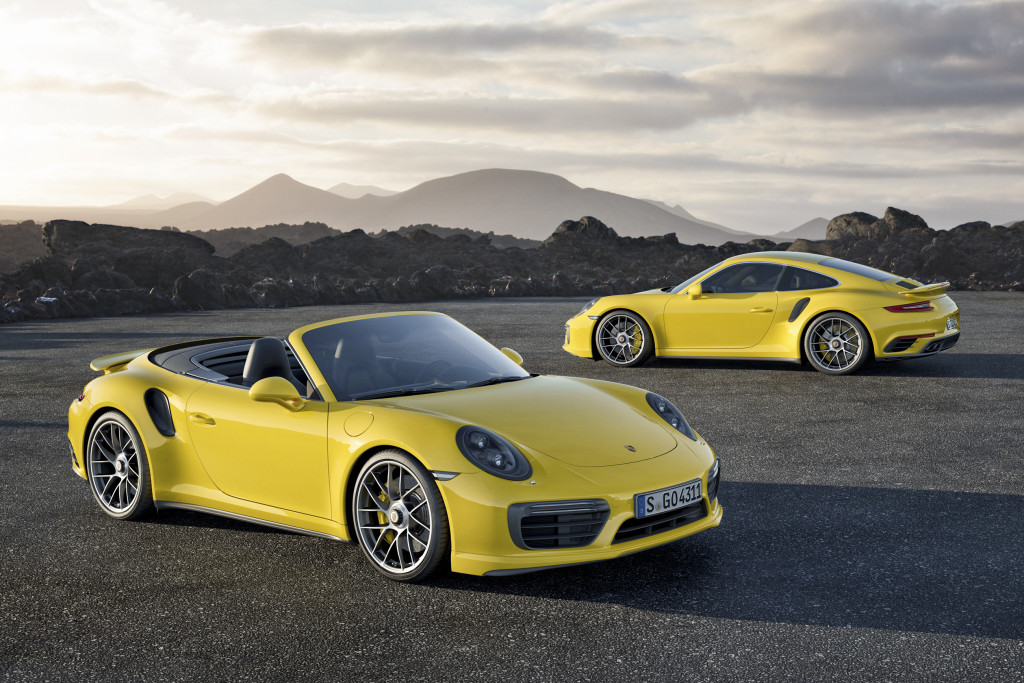 The engines now also have a dynamic boost function, which improves throttle response during spirited driving. It maintains the boost pressure during load changes – i.e. when the accelerator pedal is briefly released. This is achieved by interrupting fuel injection, while the throttle valve remains partially open. As a result, the engine responds to changing throttle applications with practically no delay. The effects of this function are particularly pronounced in the Sport and Sport Plus modes. 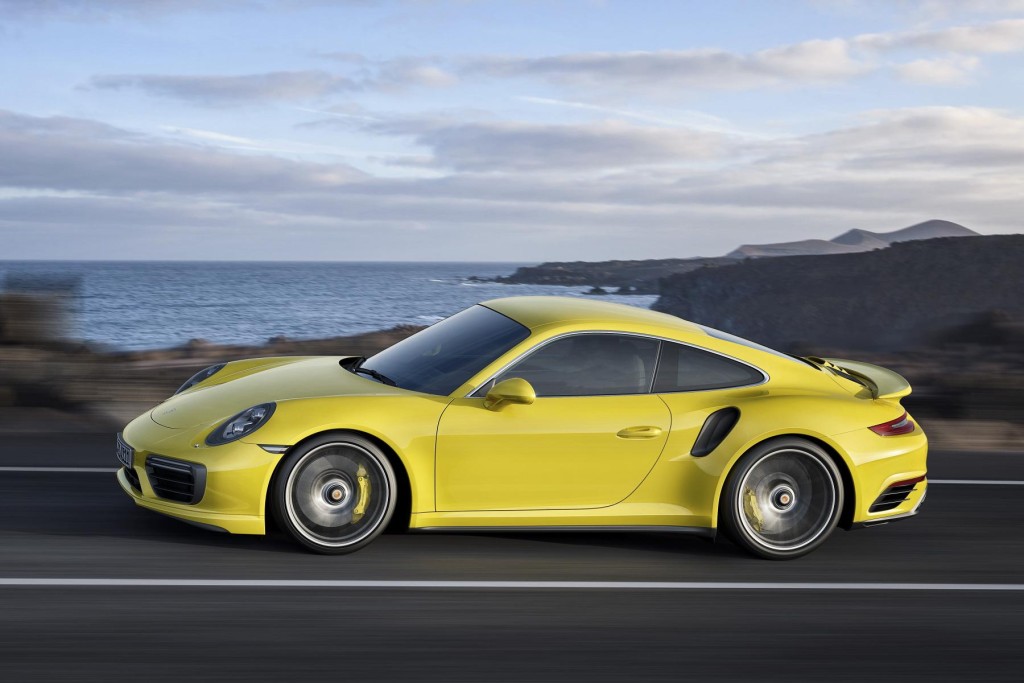 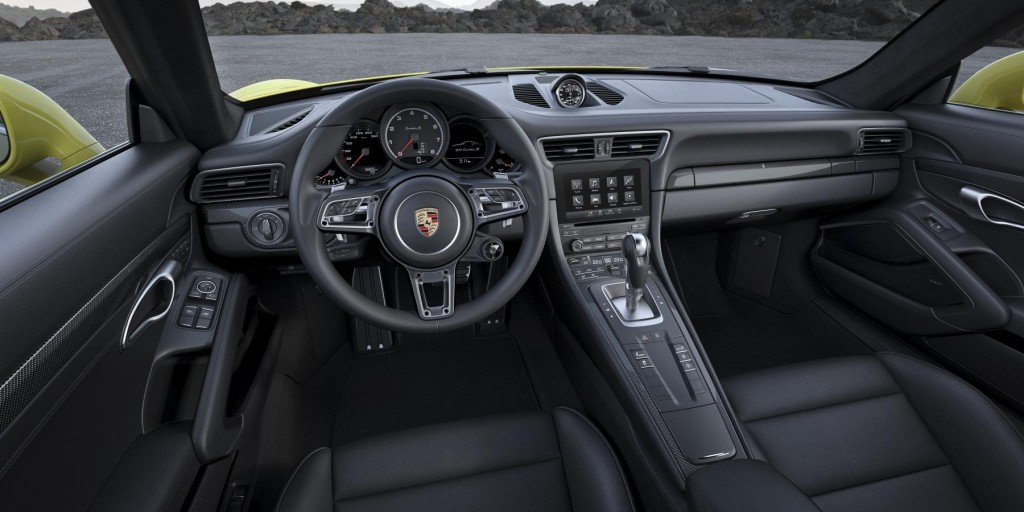 The Sport Chrono Package is now a standard feature on all 911 Turbo models. This includes the new GT sport steering wheel in 918 Spyder design measuring 360 mm or 14.1 inches in diameter and is equipped with a mode switch. It consists of a rotary ring with stepped positions that can be used to select one of the four drivetrain modes Normal, Sport, Sport Plus, or Individual. The Individual setting lets the driver configure and store her or his preferred vehicle setup, including PDK shift strategy, throttle response and damper control. Another new feature of the Sport Chrono Package is the Sport Response button. When the black button located in the center of the mode switch is pressed, it preconditions the engine and transmission for the best possible responsiveness. In this state, the vehicle can produce optimal acceleration for up to 20 seconds. 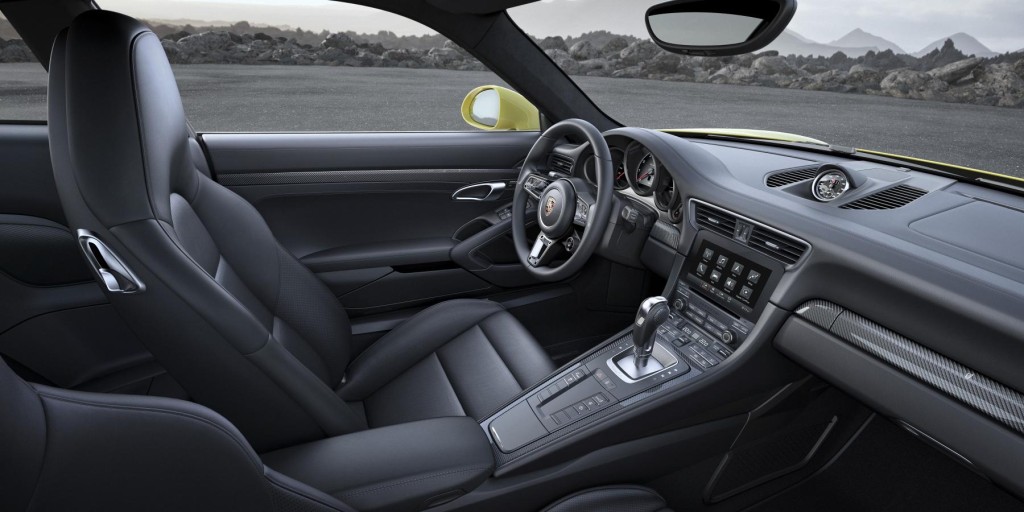 The Porsche Stability Management (PSM) system in the 911 Turbo models now features a new PSM Sport Mode. When the PSM button on the center console is pressed once, PSM Sport Mode is activated. This new mode shifts the PSM’s intervention to a higher threshold than was the case in Sport Plus mode on the previous model. PSM Sport Mode allows the driver to approach the limits of the car more closely, for example on a closed course. However, PSM still remains active to help the driver maintain vehicle stability. True to the Porsche philosophy of giving the driver the option of full vehicle control, a long press of the PSM button completely deactivates the system. 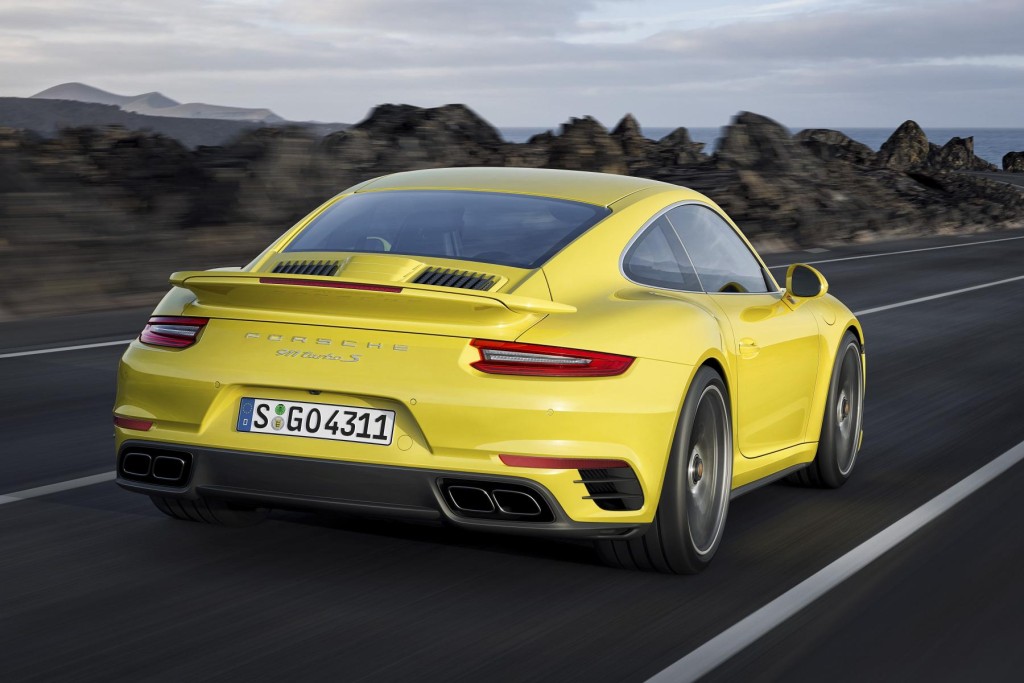 The chassis of the new 911 Turbo models with PASM as standard now offers an even greater spread between performance and comfort. In addition, the 911 Turbo S offers a full array of standard equipment for peak performance: the active roll stabilization program PDCC is standard on the S model as is the Porsche Composite Ceramic Brake (PCCB) system. New options for all 911 Turbo models include radar-based lane change assist and a lift system for the front axle that can be used to increase ground clearance by 40 mm or 1.5 inches measured at the front spoiler lip. Sport Chrono Package, Park Assist front and rear including reversing camera, and LED headlights with the Porsche Dynamic Light System (PDLS) are now standard on all 911 Turbo models. In addition to higher performance, the Turbo S models offer an even more extensive range of standard equipment than the Turbo variants, including 18-way Adaptive Sport Seats Plus with seat backrests in leather, a two-tone leather interior, LED headlights with PDLS+, Sport Design exterior mirrors, and Carbon Fiber interior trim. 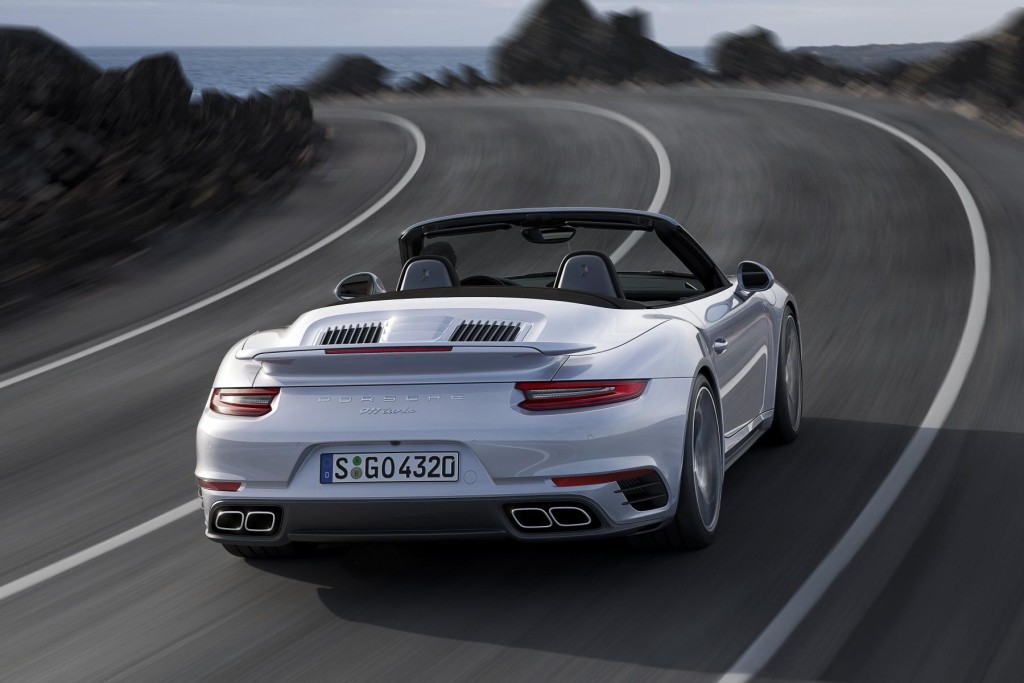 Naturally, the new generation of 911 Turbo adopts significant design characteristics of the 2017 911 Carrera models, supplemented by typical 911 Turbo special features. The redesigned front end with side air blades and narrow LED front lights with double fillets promote the width of the car, as does the additional fin in the central air intake. All models are also fitted with new 20-inch wheels. The center lock wheels on the 911 Turbo S feature seven instead of ten double spokes. Measuring 9 J x 20 at the front and 11.5 J x 20 at the rear, the new wheels of the 911 Turbo models are each half an inch wider, equaling those of the 911 Turbo S in size. Just like on the 911 Carrera models, new door handles without recess covers give the car a sleeker look. The rear fascia was also thoroughly reworked. Three-dimensional rear lights with their four-point brake lights and aura-like illumination, familiar from the 911 Carrera series, catch the eye. The new models also feature redesigned dual tailpipes and exhaust tips. As before, the Turbo S can be distinguished by stainless steel exhaust tips in black chrome, while the Turbo is fitted with those in high gloss chrome. The new rear decklid grill now features three parts: the right and left sections have longitudinal vent vanes, and the middle cover is separated to optimize air induction for the engine.

As in all 2017 911 variants, the newly developed infotainment system, PCM with navigation, is standard. This system features a 7-inch multi-touch monitor with high-quality glass surface, which is perfectly integrated into the center console and offers numerous new and extended connectivity functions thanks to the standard Connect Plus module. Navigation can also access the latest online traffic information in real time (Google® StreetView). Routes and destinations can be visualized with 360-degree images and satellite images (Google® Earth). In addition, the system can now process handwritten inputs. Moreover, compatible cell phones and smartphones can now be integrated more quickly, easily and comprehensively than before via Wi-Fi, Bluetooth, or cable. Select vehicle functions can now be controlled remotely as well. As in the previous models, the 555 watt Bose sound system with 12 loudspeakers, an active subwoofer and center speaker is offered as standard; an 821 watt Burmester system with 12 loudspeakers and a 300 watt active subwoofer can be ordered as an option.

In the United States, the new generation of Porsche 911 Turbo will reach dealers in April 2016.