More women behin the wheel in the U.S. - Carsfera.com 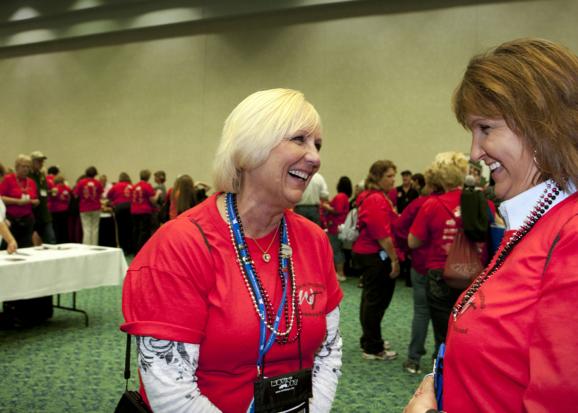 More women behin the wheel in the U.S.

About one per cent of truck drivers in Europe are women. This is a very small number, but no fewer than in many other parts of the world. At the same time, the transport industry is crying out for more drivers. In the US, the situation is somewhat better, as women account for more than five per cent of the country’s 3.2 million truck drivers. In the US, the organisation Women in Trucking has been working for a number of years to change attitudes and norms in the industry.

Ellen Voie, the founder and president of the organisation, says that the US’s current driver shortage would be addressed by doubling the number of female truck drivers to just over 10 per cent.

“There is an old-fashioned, male-oriented culture in the industry and women aren’t appreciated as being capable and available,” she says.

For this reason, Women in Trucking has, for example, put together a recruitment guide with tips on the ways haulage companies can attract more women to join them.

“First and foremost, the haulage companies and their male employees need to think again and dispense with their macho culture. The women in this industry are tearing down the barriers and this is a source of irritation to some men. It is still too common for women to be harassed by their male colleagues and for truck stops and trans-shipment terminals to feel unsafe. We are working to change this,” says Ellen Voie.

Ellen Voie started Women in Trucking in 2007, after working as a recruiter for one of the US’s largest transport companies and discovering that very few women even considered working in the industry – as drivers or in other areas. Haulage companies had not fully recognised that women could be a solution to both the shortage of drivers and the poor profitability. Women in Trucking was faced by a difficult challenge, but it has now succeeded in bringing about a positive change in the US. As things stand, the organisation has around 2,000 members and three employees, all of whom are working actively on getting information to schools, government agencies, politicians, haulage companies and other transport companies.

“It isn’t just the transport industry, but also the whole of society that can benefit from more women being employed in the traditional male professions. Female drivers are often safer drivers and incur less damage to their trucks, which is something from which haulage companies can benefit,” stresses Ellen Voie.

In the US, it is not uncommon to find driving teams in which a married couple, father and daughter or boyfriend and girlfriend undertake long-distance transport work together. These teams live in their trucks, which are frequently extended trailers, otherwise known as ‘sleepers’, with a kitchen, bathroom and berths for two people. Ellen Voie believes that this culture could be one of the reasons why more women drive trucks in the US compared with Europe.

“Women have a natural way into the industry and they share the responsibility and the cost of a truck with a partner,” she explains.

She says, “It’s important to have female role models and that’s why Volvo Trucks is sponsoring Women in Trucking’s ‘Salute to Women Behind the Wheel’. This is an annual event which celebrates female truck drivers, many of whom have covered at least a million incident-free miles.”

In Europe, there are organisations similar to Women in Trucking in countries including the UK, France and Sweden. In the largest EU project to date, the haulage industry in Sweden conducted the ‘Drivers on the road’ project. It was designed to increase the number of young people, immigrants and women in the industry and it was so successful that several of the networks that were created within the framework of the project are still active.

Brigitta Paas is vice chairman of the ETF’s (European Transport Federation) women’s committee and every day she deals with the question of bringing more women into the industry. The ETF’s plan of action for 2009-2013 states that all the member organisations must implement the necessary measures before 2013, in order to increase the recruitment of women in the transport industry. However, the work is going slowly and laboriously, even if the projects are successful and the aims are ambitious.

“As long as there is cheap labour available in Eastern Europe, the haulage companies are going to employ those people rather than existing drivers or women who are keen to start driving. I wish the associations would do more in this area,” she says.

Since 1999, Volvo Trucks in Sweden has been organising what are known as Ladies’ Days. The aim here is to arouse the interest of women and girls in driving as a profession by telling them about the industry, organising meetings with female drivers and giving them the opportunity to drive Volvo’s trucks. So far, Ladies’ Day has been a success and has attracted more than 100 participants on each occasion.

“The haulage companies that do not employ women risk losing out on valuable skills and know-how, which is neither good nor particularly smart. I am convinced that women have a great deal to offer the industry when it comes to safe, fuel-efficient driving,” says Martin Bramsved, global manager Corporate Social Responsibility at Volvo Trucks.

Martin Bramsved feels that it is only natural for manufacturers like Volvo Trucks to take an interest in the people who sit behind the wheel, as well as sell or service the vehicles

Martin continues, “Even if we don’t employ drivers, we are still eventually dependent on truck transport that operates efficiently and effectively. This is why we are involving ourselves in social issues such as recruitment. As we see it, it’s reasonable for the industry to extend its recruitment base and regard women as a natural part of it – especially as there is a shortage of drivers.”

In the past, the actual truck and its handling represented an obstacle for women. Trucks today, on the other hand, do not require drivers who have exceptionally strong arms or are especially tall.

“Truck cabs are designed for drivers to live and work in, no matter whether they are women or men and independent of the strength of the drivers’ arms. For example, the drivers’ seats and steering wheels in Volvo trucks are extremely adaptable and are therefore ideal for short and tall drivers alike,” Martin Bramsved explains.

Earlier this year, Volvo Trucks was eager for Ellen Voie to share her experience and knowledge outside the US and so brought her to Sweden and the Elmia Truck Show at in Jönköping. Support from the industry is contributing to Women in Trucking’s success.

“It’s incredibly important that manufacturers get involved, just like Volvo Trucks is doing. After all, if there are no drivers, they won’t be able to sell trucks,” says Ellen Voie.

Next Story → Ford Motor Company is issuing a safety recall for approximately 850,000 vehicles in North America