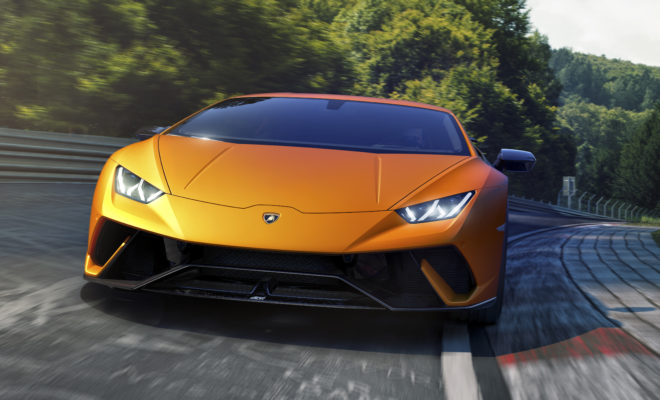 Automobili Lamborghini unveils the Huracán Perfomante at the Geneva Motor Show, combining new lightweight technologies, active aerodynamics with aero vectoring and a new set-up of chassis, all-wheel-drive system and further improved powertrain. The Huracán Performante is the result of Lamborghini innovations, producing a super sports car balanced between achieving the best lap times on a circuit with the most engaging and dynamic road driving. On 5 October 2016, the Huracán Performante set a new production car lap record of 6:52.01 min on the Nürburgring Nordschleife in Germany. 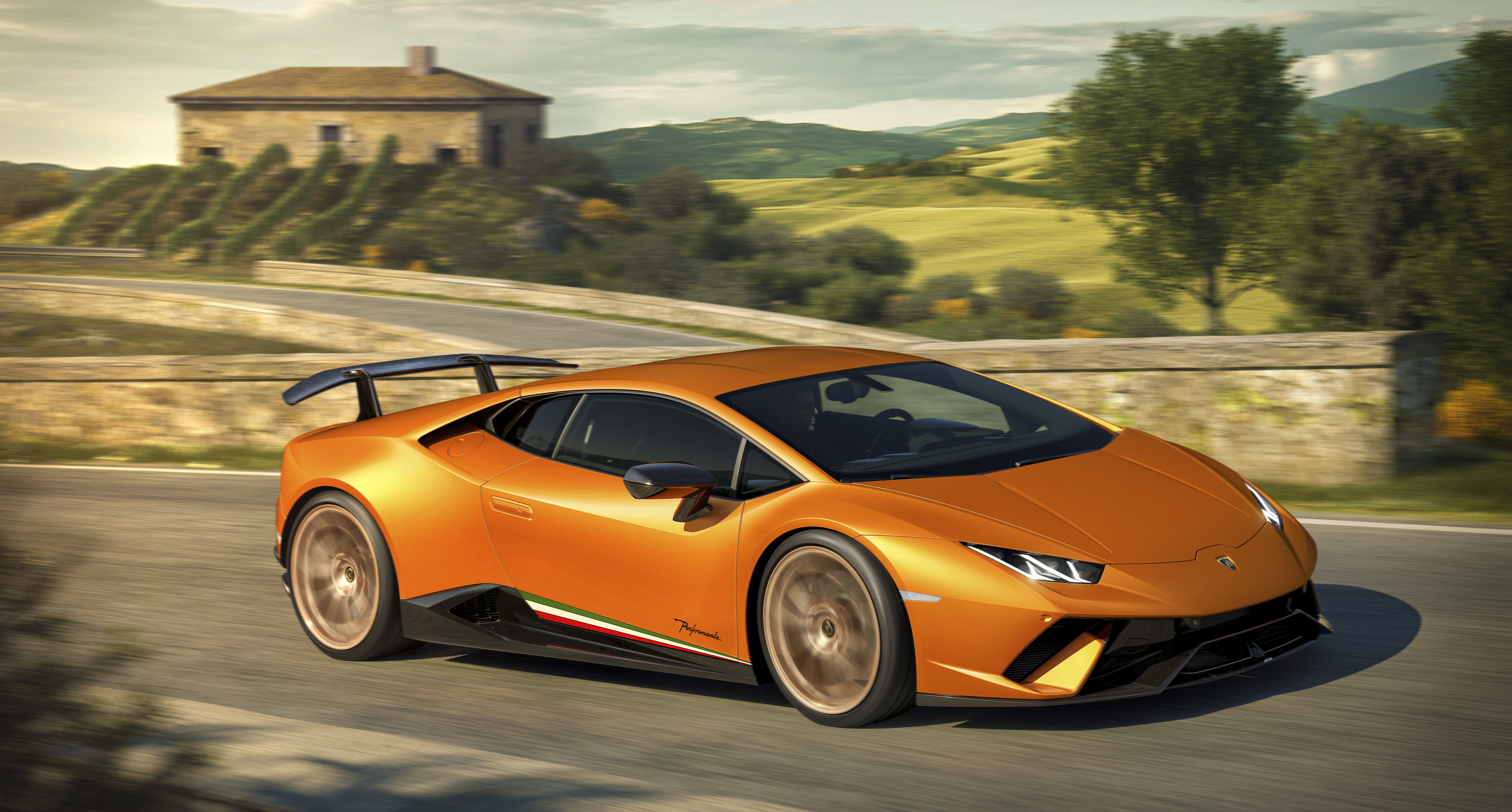 “The Huracán Performante is the convergence of technological developments to produce a car delivering perfect performance,” says Automobili Lamborghini Chairman and Chief Executive Officer Stefano Domenicali. “This new car represents the powerhouse of Lamborghini DNA and innovation, and a 360 degree approach to creating class-leading super sports cars. It illustrates the pinnacle of Lamborghini V10 production car performance to date, on both track and road, and is perfectly exemplified by its name: Lamborghini Huracán Performante.”

Based on a hybrid aluminum and carbon fiber frame, the Huracán Performante’s body is produced from aluminum in conjunction with significant use throughout of Lamborghini’s award-winning Forged Composite. Using chopped carbon fibers in a resin, Forged Composite allows the creation of lightweight, complex geometrical shapes beyond that possible with traditional carbon fiber composite materials, while maintaining optimum stiffness. The Performante features Forged Composite in structural components including front and rear spoiler, the engine bonnet, rear bumper and aerodynamic diffuser, contributing to the car’s weight reduction of 40 kg. 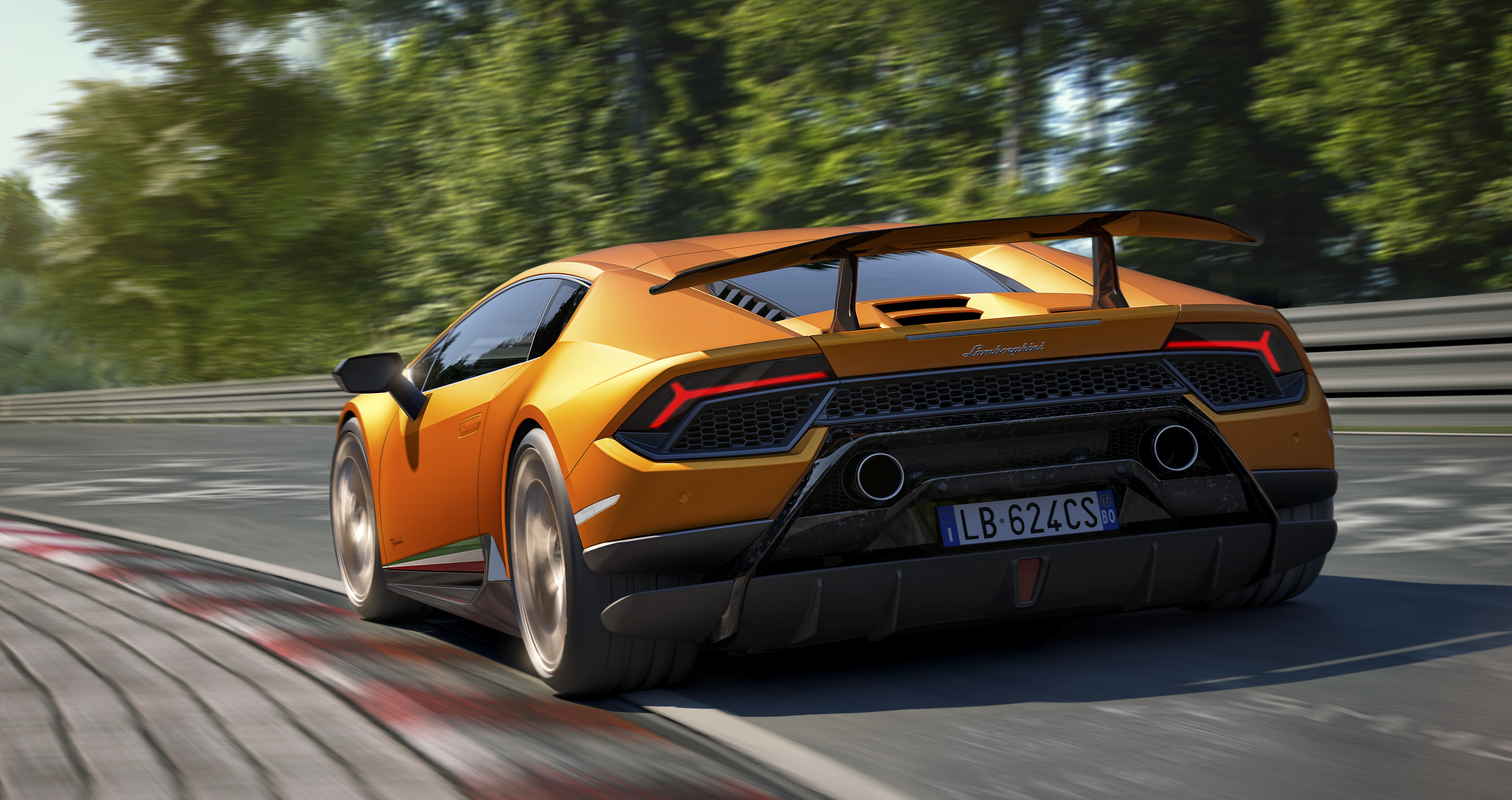 The system is completely integrated into the vehicle in terms of design, weight and performance. The front spoiler integrates the electric motor of the front ALA system, built in a carbon forged frame with active flaps on the top exterior surface. The rear bonnet is designed around the air ducts to the rear wing as well as the wing pylons.

Lamborghini’s Piattaforma Inerziale (LPI) governs all the car’s electronic systems in ‘real time’ and is perfectly integrated with the ALA system, activating the ALA system flaps in less than 500 milliseconds to ensure the best aerodynamic set-up of the car in every driving condition.

When ALA is off, the active flaps inside the front spoiler are closed, generating the desired high downforce for high speed cornering and full brake conditions. When ALA switches to on the front flaps are opened by the front electric motor, reducing air pressure on the front spoiler and directing air flow via an inner channel and through the specially shaped underside of the car. This drastically reduces drag and optimizes conditions for maximum acceleration and top speed.

In the rear of the Performante four ducts are installed below the rear bonnet. The two central ducts are always open to allow underhood ventilation and exhaust cooling, while the two external ducts are connected to the inner channels of the rear wing. The air flow through the rear wing channels is controlled by two electro-actuated flaps. The entire system is 80% lighter than a traditional hydraulic system.

When ALA is off the rear flaps are closed, permitting the rear wing to act as a traditional fixed wing. Stability is enhanced in high speed cornering and full braking by creating maximum vertical downforce; 750% more than a Huracán coupé.

The LPI turns on the ALA in high throttle conditions, opening the rear flaps to allow air through the rear wing’s inner channels and directing air flow through ridges underneath the wing. This reduces drag and maximizes the car’s acceleration and top speed capabilities.

In addition, the rear wing’s inner air channel is split right and left, allowing aero vectoring for high speed cornering. Depending on the direction of the turn, the LPI instructs ALA to be switched on in either the right or left side of the spoiler, increasing downforce and traction on the inner wheel, counteracting the load transfer in rolling conditions. This in turn optimizes the chassis’ momentum, requiring a reduced steering angle and improving the car’s overall dynamic stability.

The Huracán Performante contains the DNA of a true Lamborghini, with its design unmistakably describing and emphasizing the car’s purpose and inherent technologies, like a piece of technical art.

Reflecting the pure lines and performance of Lamborghini Super Trofeo race cars, the design also takes inspiration, particularly at the rear, from naked performance motorcycles, with their exposed frames and ‘streetfighter’ structures expressing function and performance.

Moreover, the design highlights the active aerodynamics (ALA) and lightweight build that are so integral to the car. Gloss, naked Forged Composite with its ability to be shaped or moulded in a single piece, is always used in ALA components, alongside matt and gloss black carbon fiber features contrasting with the matt body color: shown in a new matt orange (Arancio Anthaeus) on the Huracán Performante in Geneva.

The new front is sophisticated and razor-blade sharp like a race car, with the design of the air intakes and splitter giving the impression of incisors, reminiscent of a striking snake. The active aerodynamic front spoiler is clearly visible in Forged Composite. The front bumper has no grills emphasizing lightweight, efficiency and sportiveness. 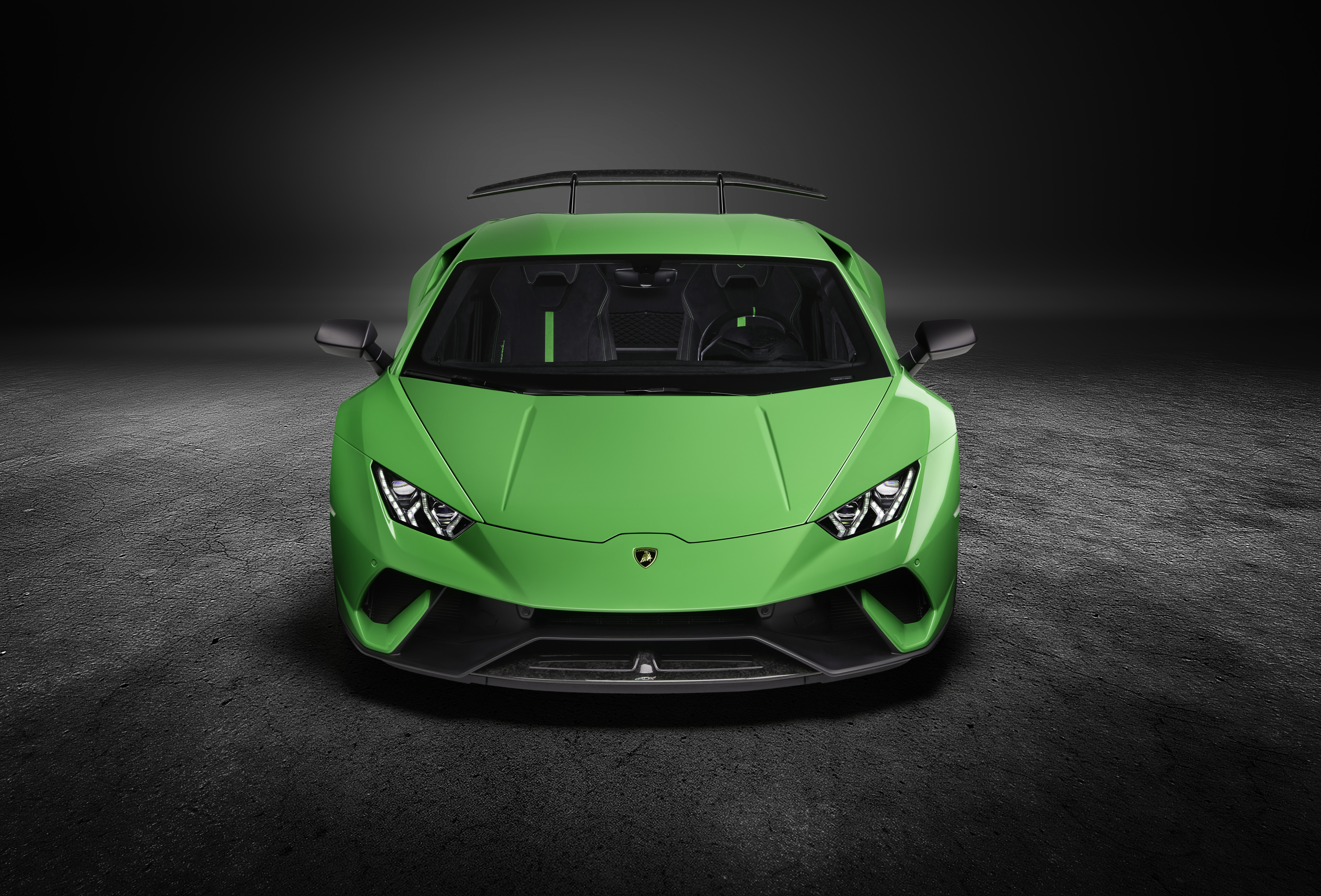 The engine bonnet in Forged Composite emphasizes its lightweight construction. Air intakes are integrated in the engine bonnet to provide air flow to the rear wing inner ducts and cooling air to the engine, with a Plexiglas cover over the engine inside. The V10 power plant’s manifold cover in bronze, a finish used in other special edition engines, is a reminder of Lamborghini heritage as well as denoting the enhanced engine and increased power output.

The racing inspired and fascinating rear, features extensive carbon fiber, with Forged Composite components reinforcing the significance of active aerodynamics. The rear wing with integrated air ducts could only have been created in one piece using the Forged Composite technology. 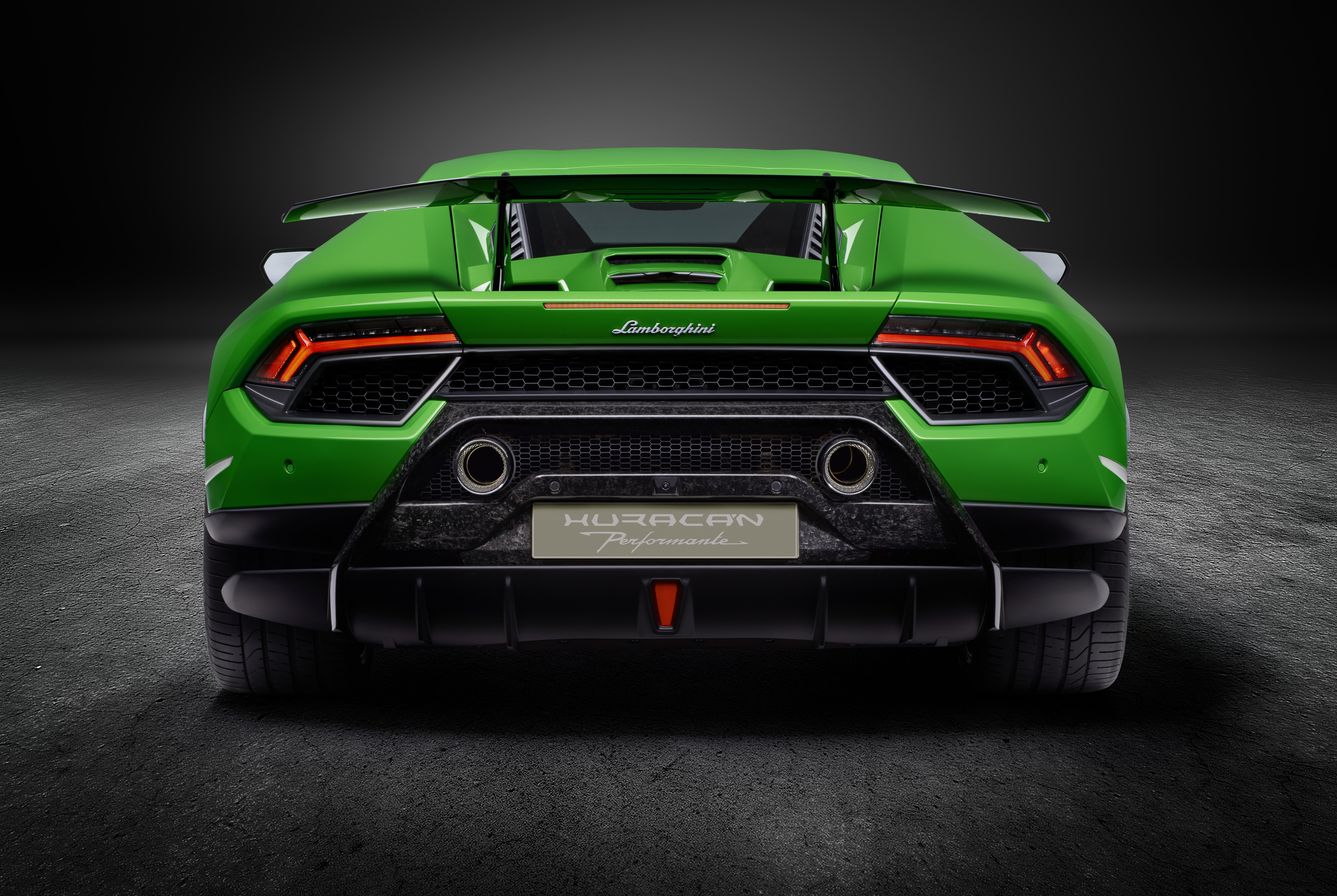 The sportiness of the Performante’s design is exemplified by the high-mounted exhausts, similar to extreme sports motorcycles, which create a more direct physical connection with the engine. The rear diffuser in matt black is directly inspired by Lamborghini Super Trofeo race cars, in both appearance and function. A trapezoid line from the bottom of the diffuser, also in Forged Composite, emphasizes the width of the car’s rear: technical and sporty with an immense presence.

From the side, the design is characterized by the accelerating line of the rocker cover with air intakes in matt black, the Italian tricolore colors of the Performante’s Sant’Agata Bolognese birthplace on the doors, topped with wing mirrors in shiny black. The lightweight, Narvi 20” forged wheels, dedicated to the Huracán Performante, are painted in br
The enhanced naturally aspirated Huracán engine is the most powerful V10 produced to date by Lamborghini. Outputting 640 hp (470 kW) at 8,000 rpm and producing 600 Nm of torque at 6,500 rpm, it is distinguished by a new bronze manifold that draws on the heritage of previous special edition engines such as the Diablo 30th Anniversary power plant.

The Performante’s new powertrain draws on sophisticated technologies including developments from Lamborghini’s motorsports program. Engine fluid dynamics for both intake and exhaust have been optimized, as has the V10’s air intake system with reduced loss improving responsiveness. New titanium valves allow higher valve lifts to increase engine permeability and performance.

The exhaust system has been redesigned to achieve weight reduction and less back pressure. The exhaust pipes, positioned at a higher and more central position, deliver a more aggressive sound in high performance use, resonant of motor racing.

The car’s powerful engine produces an optimized torque curve, with more than 70% of torque already available at 1,000 rpm. Reflecting this, Lamborghini’s seven-speed dual clutch transmission has been also optimized in order to match the increased performance. 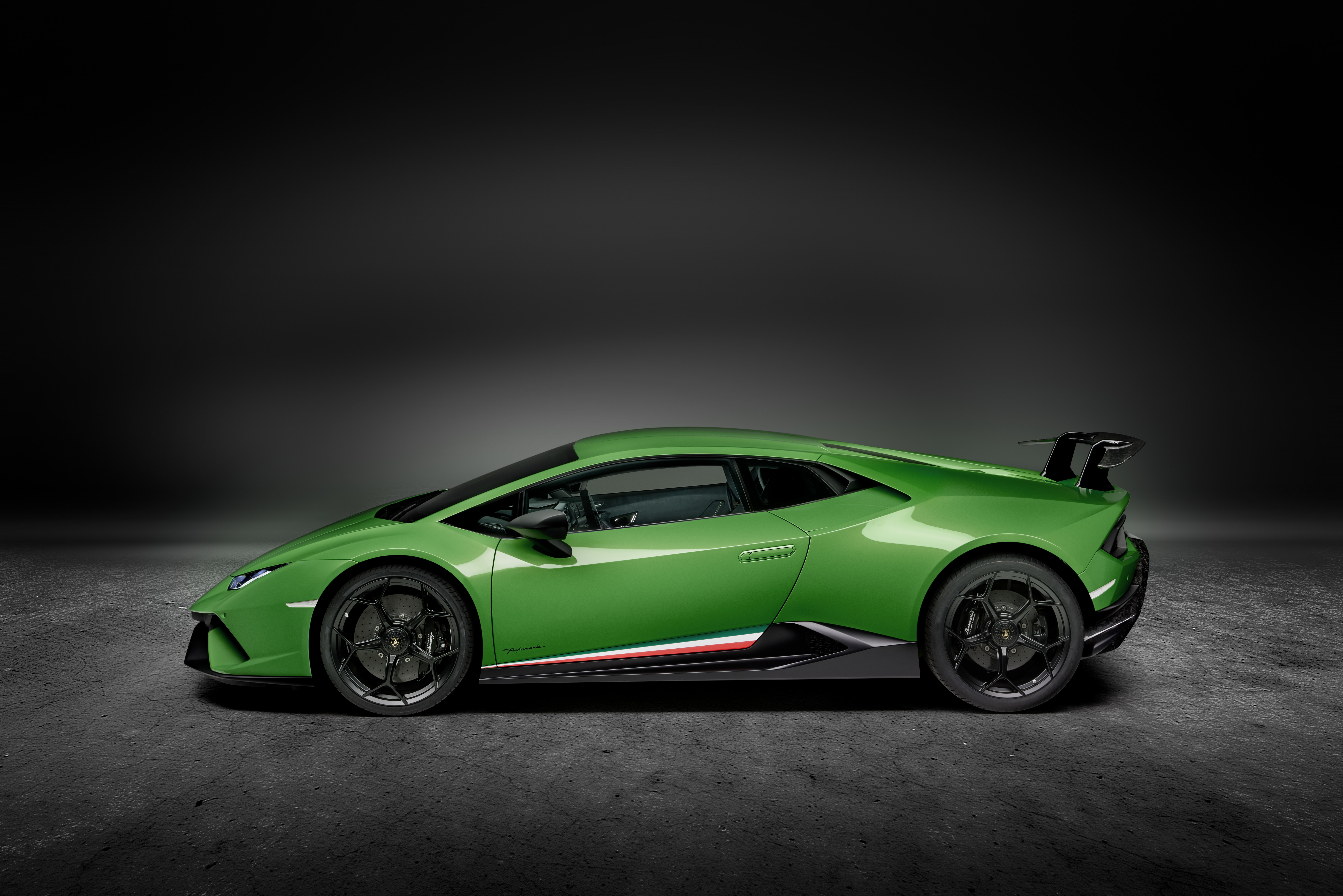 The Huracán Performante’s suspension system has been revised, reflecting the Performante’s purpose as a track and performance-oriented car. The suspension has been vertically stiffened by 10% over the Huracán coupé, via both springs and bars, and roll stiffness improved by 15%. The stiffness of the radial and axial arm bushings has been improved by 50%, significantly enhancing lateral control of the car.

The permanent four-wheel drive system is tuned to maximize traction in all situations, working in conjunction with the ALA system and exploiting the new P Zero Corsa tires. ESC has been calibrated to smooth intervention and be less intrusive.

Lamborghini’s ANIMA system, controlling driver modes that customize the set-up of all the car’s systems, has also been revised to enhance the driving experience in each of the modes: Strada, Sport and Corsa. In Strada, traction and stability are prioritized. Sport offers a more rear-wheel drive orientation, with oversteer behavior and easier drifting. The Corsa driving mode is focused on top performance and handling to maximise results on track. 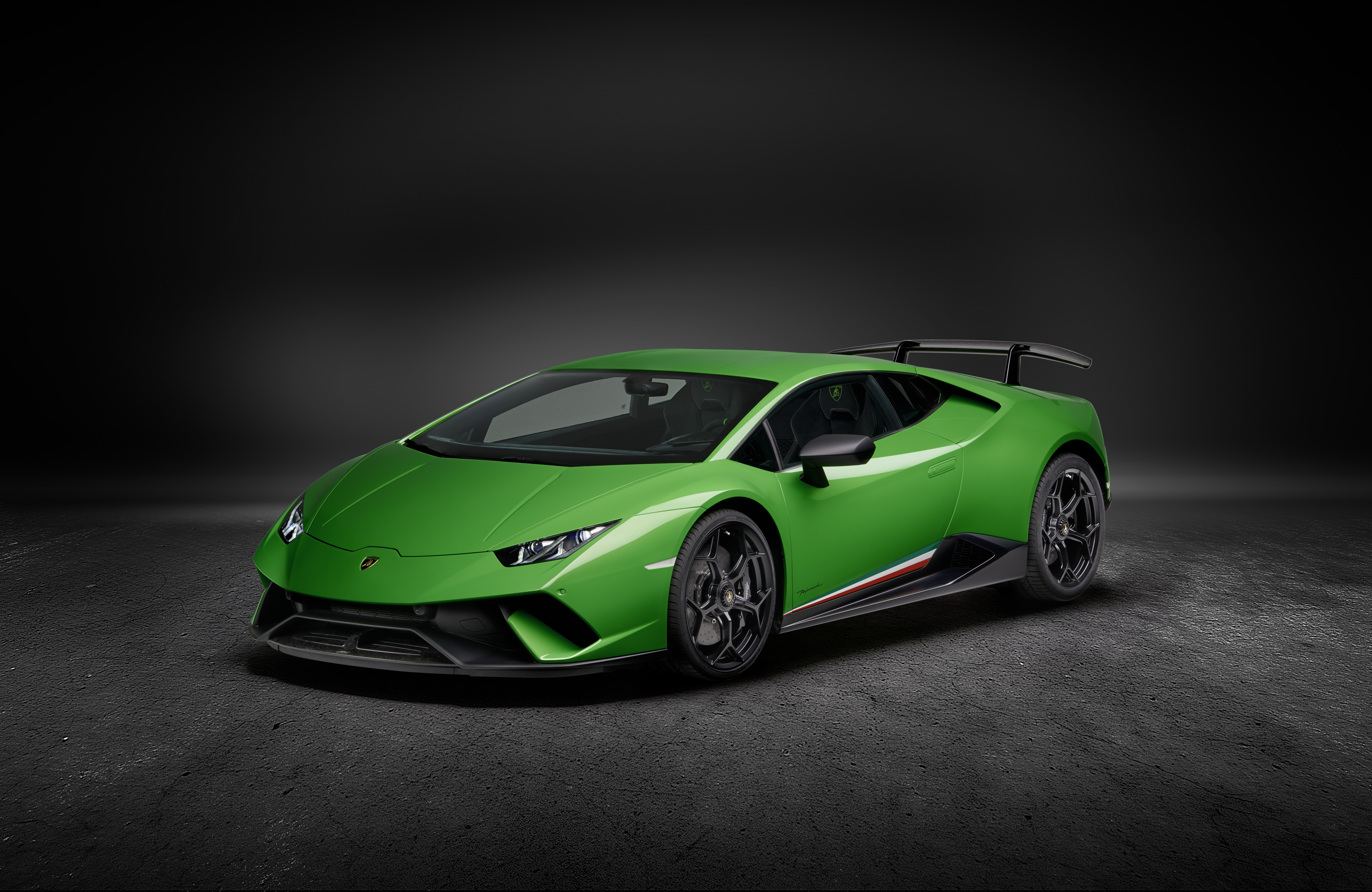 The Huracán Performante’s extraordinary acceleration and top speed are matched by the performance of its highly responsive braking system, providing smooth, continuous braking from its ventilated and cross-drilled carbon ceramic discs. An hydraulic dual-circuit system with vacuum brake servo unit has six-piston brake calipers at the front and four-piston calipers at the rear. The ABS also offers up drastically improved performance and pedal feedback to the driver via the P Zero Corsa tires.
The interior of the Huracán Performante reminds the driver of its lightweight and aerodynamic purpose. Air vents, paddles, door handles and the center console are created from Forged Composite. Referencing its racing heritage, lightweight, dark colored Alcantara fabric is used throughout, including on the sports seats where an optional ‘Y’ graphic can be lasered. Comfort seats with the same trim are available as an alternative. 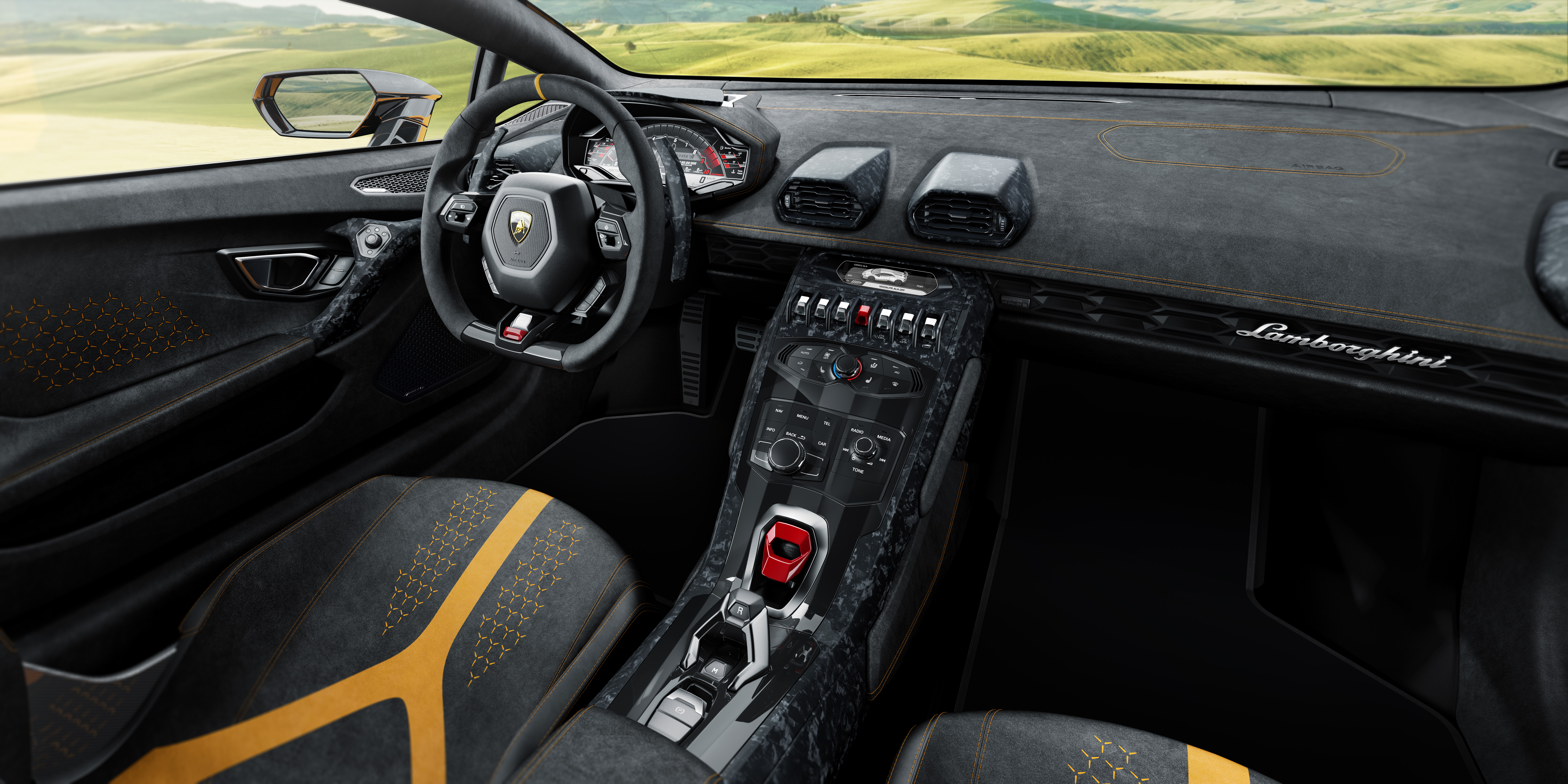 Inside, the driver is fully in touch with the active aerodynamics’ activities: not only through the car’s performance, but from the special ALA graphic in the dashboard display which shows when and how ALA is working, including aero vectoring.

Inside the Huracán Performante, the new digital cockpit displays are configurable depending on driving mode selected: Strada, Sport or Corsa, with a display dedicated to the ALA detailing data on downforce and drag. The new cockpit layout supports Apple CarPlay and its iPhone apps including the Lamborghini telemetry system, which allows the driver to record, replay and study his own performance. 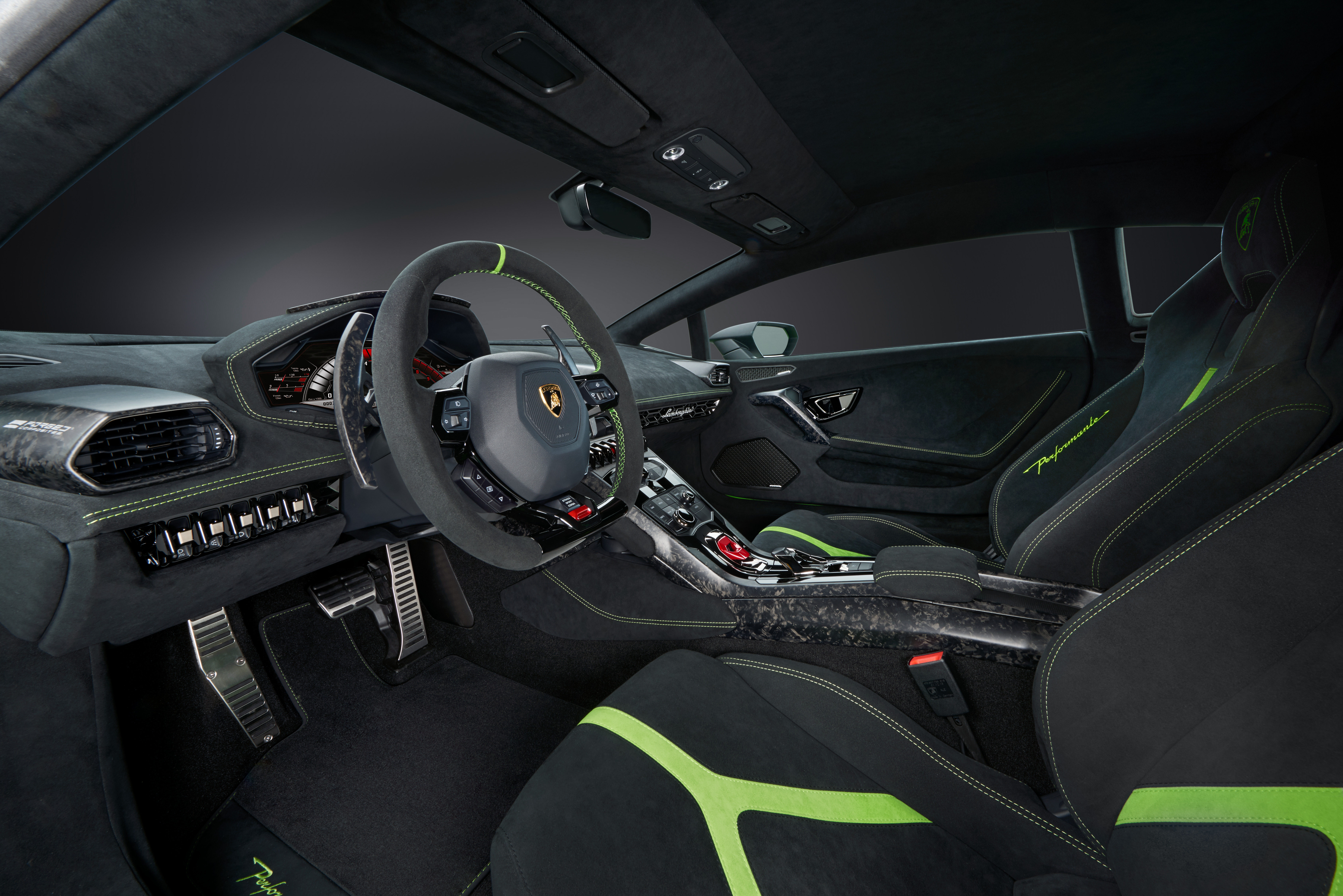 The Lamborghini Ad Personam Program enables the owner to personalize the Huracán Performante according to his individual taste. 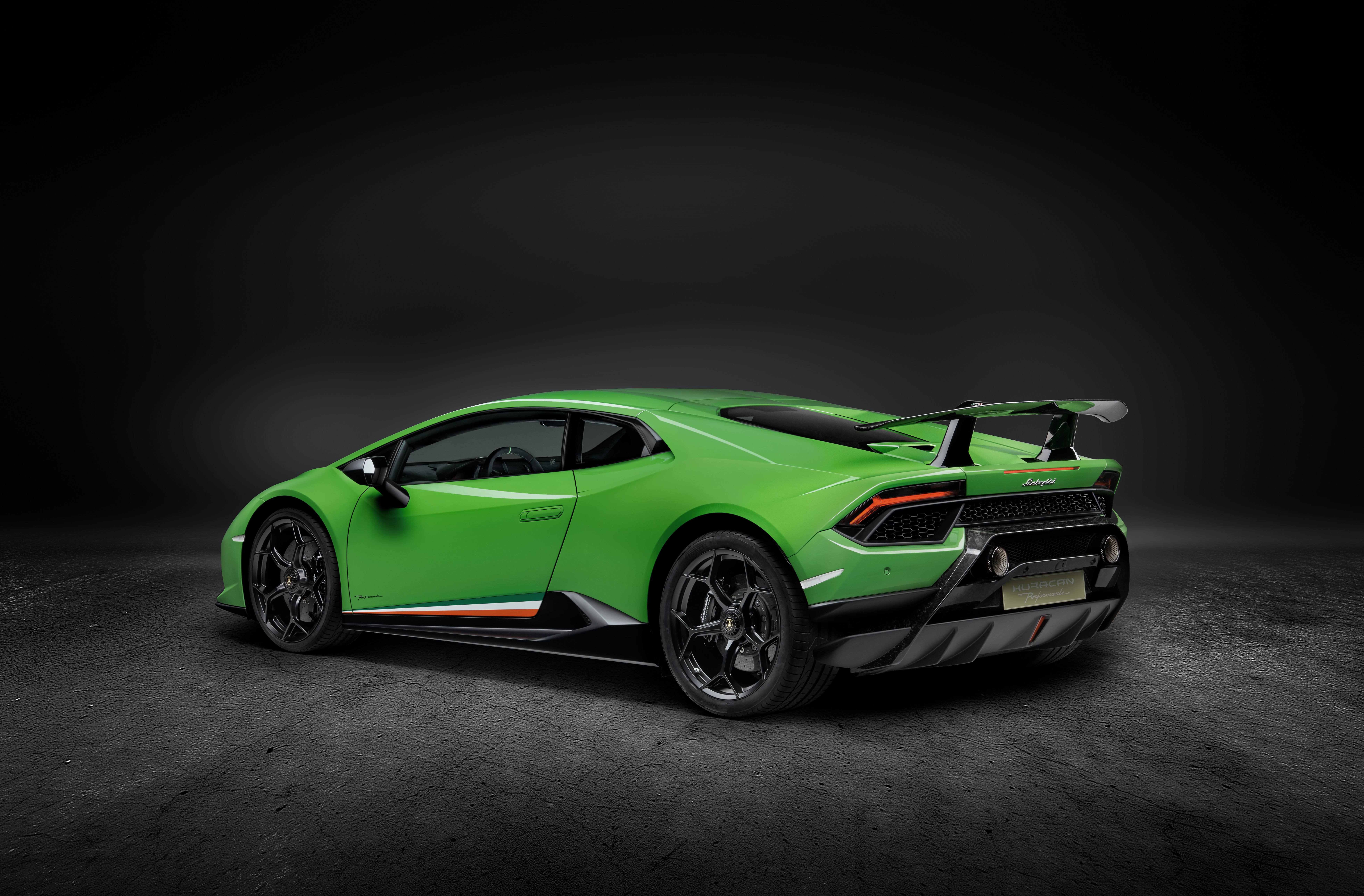 The first customers will take delivery of the new Lamborghini Huracán Performante in Summer 2017 at suggested retail prices as follows: