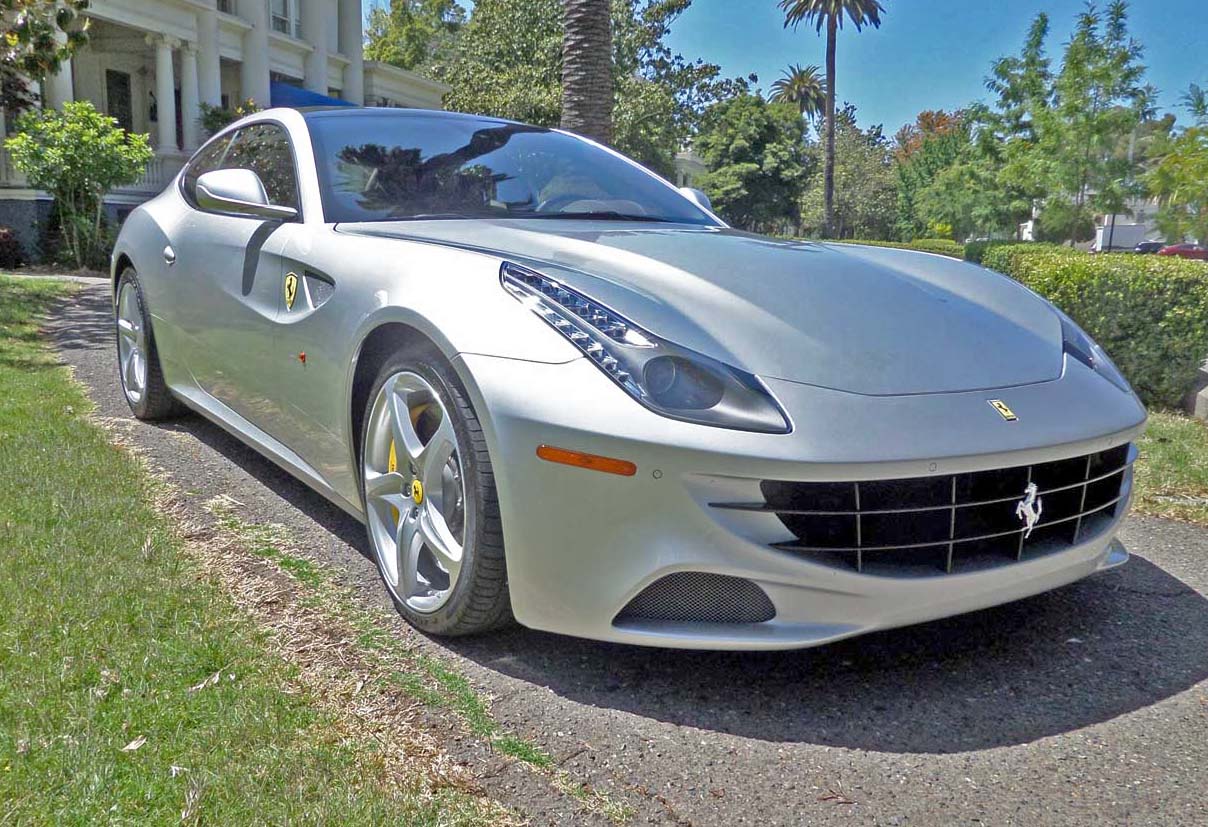 There are those who have never aspired to own a Ferrari, but then they are more often than not, individuals who have never experienced what Ferraris have to offer in terms of exclusive and elegant motoring. Even simply sitting in a Ferrari can instantly alter one’s perspective. Ferraris are indeed legendary automobiles, an iconic representation of what a super sports car can and should be. Actually, modern Ferraris may be divided into two distinct categories – sport and touring. Other smaller sub categories are extreme Grand Touring Ferraris and race model Ferraris, although any and all Ferraris may be raced. The 2014 Ferrari FF falls into the extreme GT or Grand Touring genre. 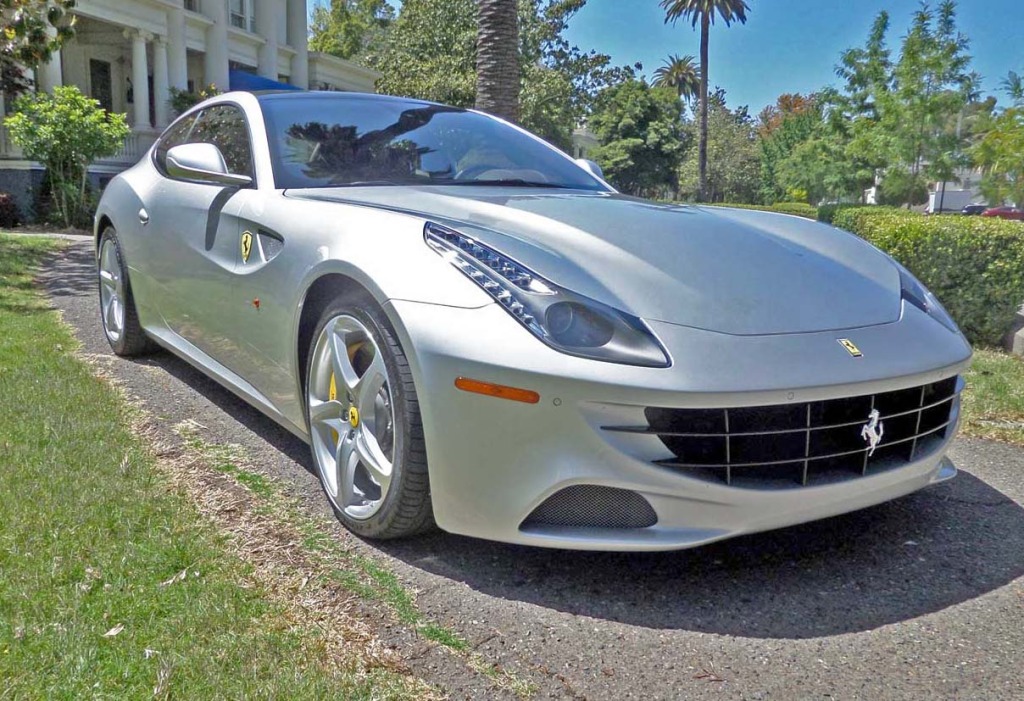 Mention the name Ferrari in automotive circles, and no one questions the mystique and legend associated with the marque. It is instantly recognized and revered, with its rich racing history bringing to mind images of speed and power that varies from one individual to another. The company name quite obviously comes from its founder Enzo Ferrari who was born on February 18, 1898 in Modena, Italy and who died at age 90 on August 14, 1988. The man who earlier established the Scuderia Ferrari in 1929, a company whose purpose was to race Alfa Romeos until 1938, engaged in the manufacture of machinery during World War II, Enzo didn’t actually build the first Ferrari automobile, the 125 Sport. It was a 1500 cc 12-cylinder car which Franco Cortese debuted on the Piacenza circuit on May 11, 1947, and two weeks later drove to victory in the Rome Grand Prix. Since that first win, Ferrari’s machinery with the Prancing Horse symbol has enjoyed more than 5,000 successful forays in track and road races the world over, building up to the company’s legendary status that it enjoys today. 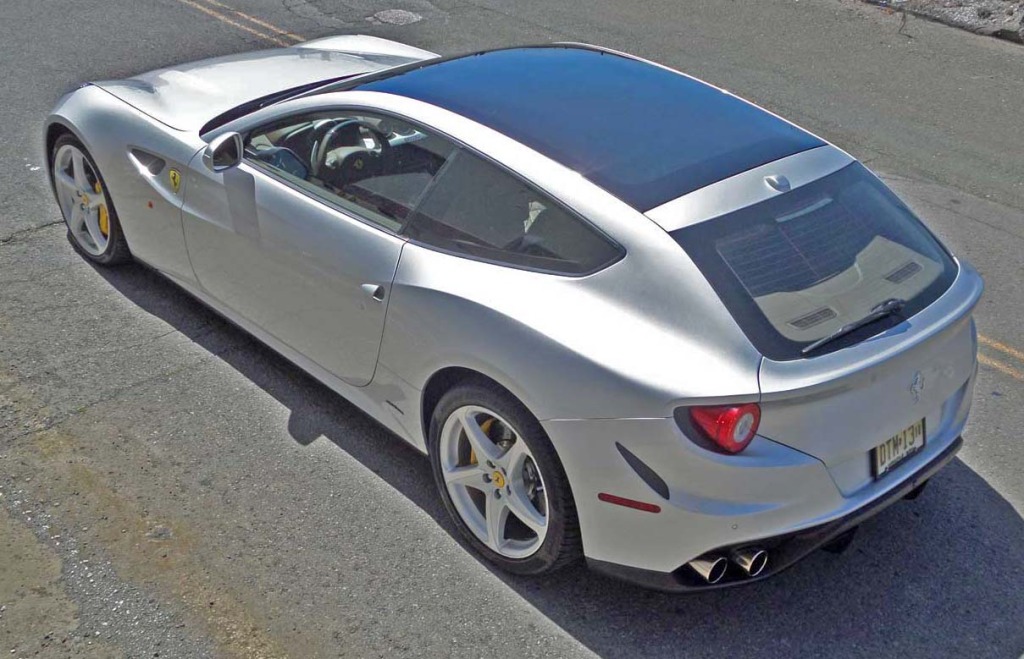 Not everyone is destined to own a vehicle bearing the highly recognizable Ferrari “Prancing Horse” shield for many reasons – the two primary issues being that their production is quite limited, and they are also quite expensive, putting them out of reach for the average consumer. I had personally never wanted to own a late model Ferrari, not even after driving a 612 Scaglietti. To be honest, while the Scaglietti was an exquisite GT automobile, it just didn’t fit my image of a Ferrari, which should in my opinion should really be an open, two-seat vehicle. More recently, I had the opportunity to drive a new Ferrari F430 Spider for a day, and later the Ferrari 458 Italia – a coupe not a roadster, both were V8 powered and very nice. 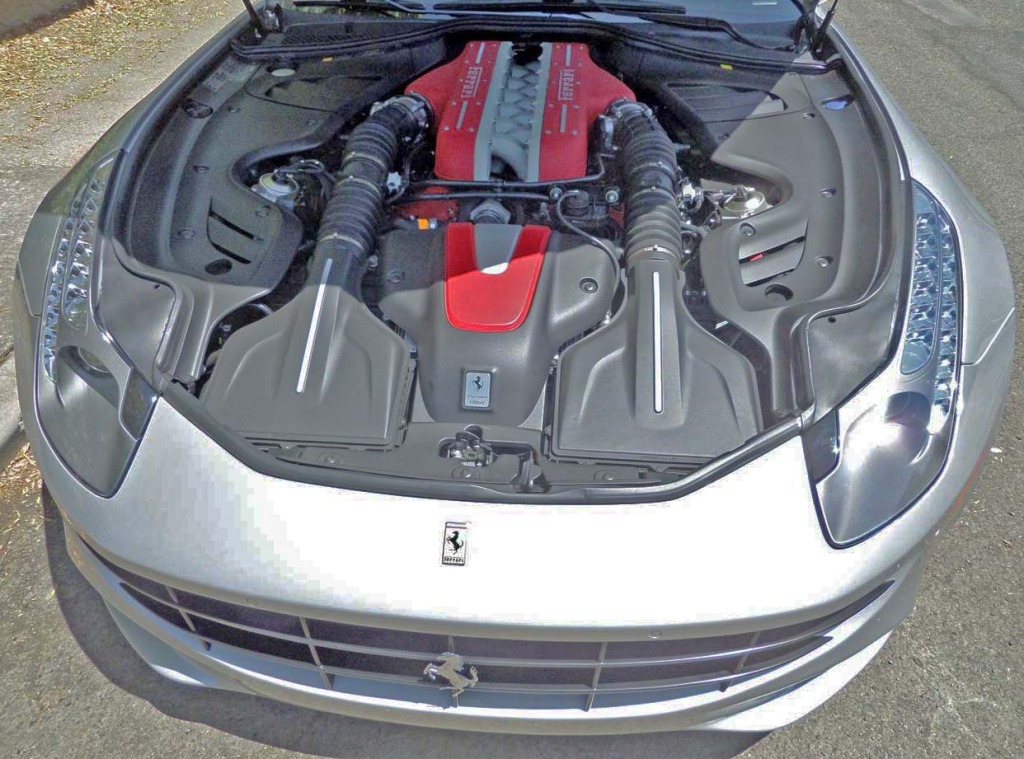 The Ferrari FF is in a class by itself, first appearing as a 2012 model and the first Ferrari to feature four-wheel drive. In terms of its appearance, it replaces the 612 Scaglietti in Ferrari’s stable displaying a somewhat similar Grand Turismo form, with an elongated hood and extended rear cabin, with seating for two additional passengers. Hence its FF model designation – for Four-wheel drive and Four passenger accommodations.

The Pininfarina designed body exudes a harmonious combination of sport and racing DNA along with a heightened level of usability displayed through its voluptuous and well proportioned form. 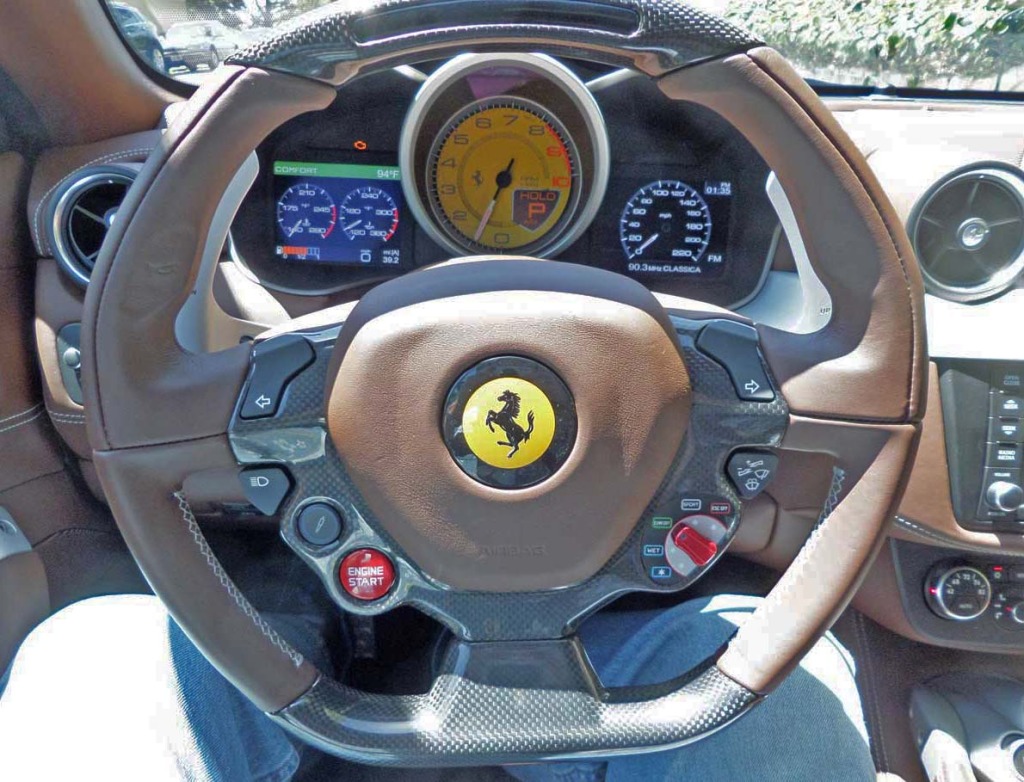 The Ferrari FF’s powertrain consists of a 6.3-liter, 382.13 cu.in (6262 cc), 65 degree V-12 engine with Direct fuel injection engine that pumps out a most impressive 651 horsepower at 8,000 rpm, while developing 504 pound feet of torque at 6,000 rpm. The powerful V12 engine is positioned longitudinally in a mid/Front orientation, and works in tandem with the 7-speed, dual clutch, F1 style automatic gearbox to meter the driving force to all four wheels via the company’s first ever four-wheel drive system – Ferrari’s exclusive, patented 4RM (four-wheel drive) system that weighs 50 per cent less than a conventional four-wheel drive system, maintaining a perfect weight distribution (53 per cent over the rear axle). The 4RM system is completely integrated with the car’s electronic dynamic control systems, delivering record levels of performance over all terrains and under virtually all conditions via continuous and intelligent predictive torque distribution to all four wheels. The potent powertrain is capable of propelling the Ferrari FF from naught to 62 mph in a mere 3.7 seconds, and of reaching a top speed of 208 mph.

Setting its performance capability aside, this latest model Ferrari from Maranello also offers standards of passenger space, comfort, in-car specs and equipment unprecedented in such a high-performance vehicle, able to comfortably accommodate four people and their luggage, thanks to the best cabin space and boot capacity (450 litres extendable to 800) figures in its category, including four-door cars.

There is a vast array of options and accessories for personalization that have been developed for the FF, including six model-specific exterior colors and sumptuous interior trim that incorporates specially selected and treated aniline leather.

The FF is also equipped with the latest magnetorheological damping system (SCM3), as well as the most recent development in carbon-ceramic brakes from Brembo. 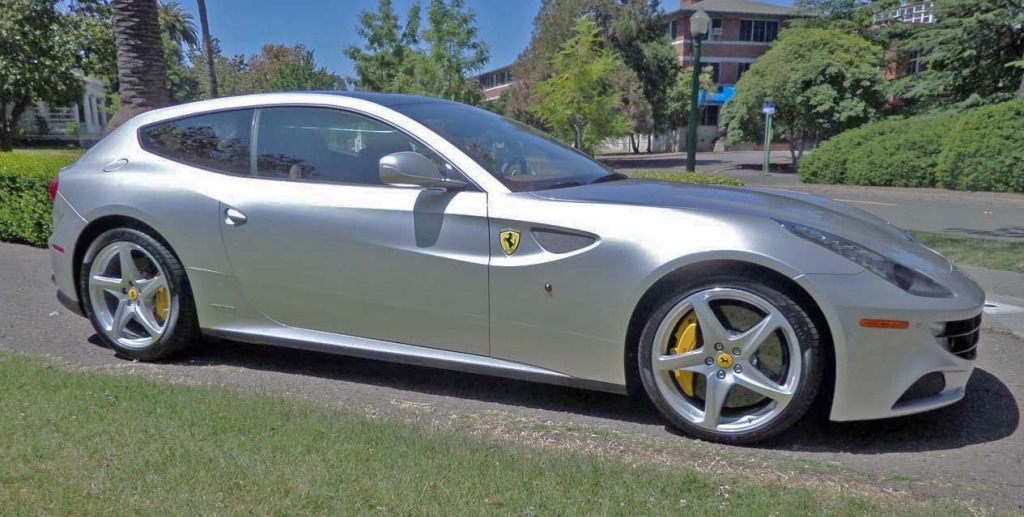 The driver of the Ferrari FF is able to change several setup formats for the car in similar fashion to Formula 1 cars by utilizing a single, steering wheel mounted selector set called the Manettino by Scuderia which functions as a commutator switch and features five specific settings: Snow and Ice; Wet; Comfort, Sport; and ESC off (or race mode), which turns off both the traction and stability controls, giving the driver full control over the car’s actions. Other wheel-integrated controls include: the engine Start/Stop button; headlight and wiper control switches; a damping control button directional signal switches and horn pads. The cabin is executed in finely stitched special leather and other special details including carbon fiber trim accents. 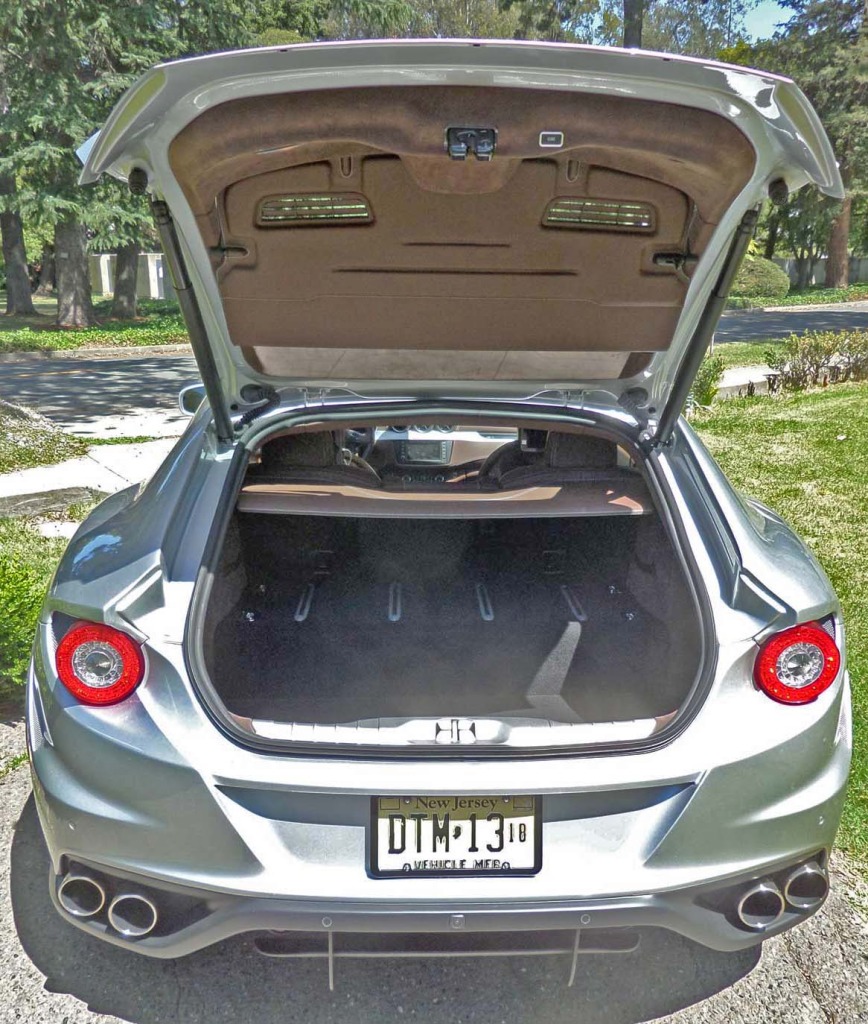 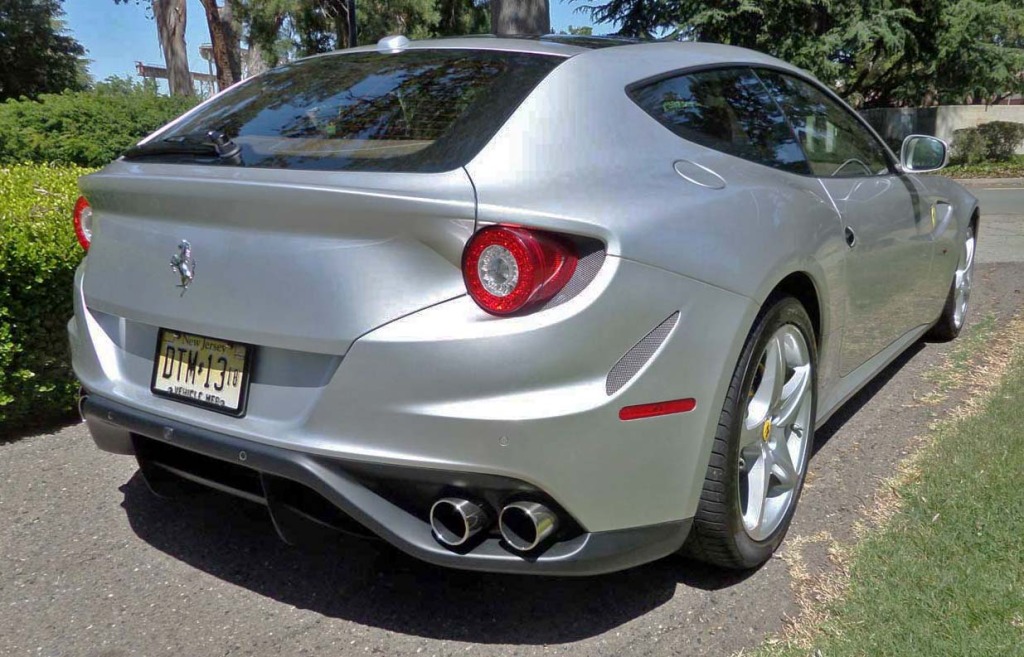 SUMMARY: Without a doubt, piloting the 2014 Ferrari FF is more rewarding and more of an emotional experience than simply looking at it. The FF virtually fills and satisfies one senses. It is a truly a spiritual vehicular creation. The authoritative rumble from the powerful 6.3-liter V12 is music to any red-blooded gear-head’s ears, and the explosive exhaust note that exits through the split dual exhaust pipes borders on orgasmic. Acceleration is rapid on demand, unless of course you want to simply cruise leisurely about town showcasing the car’s beauty.

Gear changes are executed with the F1 steering column mounted paddle shifters. One may select a fully automatic mode via a button mounted in a separated control panel mounted in the lower center console between two grab handles. Located in the same panel is a button for reverse gear as well as a PS. button for Launch Control. The Nav system screen is mounted above in the upper console. Reverse Seating is just as supportive as it is visually pleasing, and there’s plenty of room. The ride quality is most compliant and comfortable. The handling is indeed “Ferrari-like”, delivering a precise and positive feel. The FF remains flat through twisting backloads, and the tires grip the road like glue. Vehicle settings are controlled through programmable dash-mounted switches.

Other interesting touches are the sporty metal pedals, including a similar pedal for the passenger, which I deemed the “Oh No” pedal (not really, but you can add your own expletive). There’s even a readout panel for the passenger above the glove box that displays vehicle speed, the gear that the car is in and more. It even records the to speed achieved. This I dubbed the “Nagometer” because it allowed the passenger (in this case, my significant other) to observe the driver’s behavior – not necessarily a good thing, although it would be ideal for the navigator in a rallye scenario.

Bottom line, the Ferrari FF is a dream to drive, totally capable of satisfying anyone’s need for speed, but without sacrificing any creature comforts. And, while I may not have had the desire to add a Prancing Horse model to my personal stable before, the Ferrari makes an excellent case for doing so.

Ferrari’s magnificent machinery displaying the iconic Prancing Horse symbol has enjoyed more than 5,000 successful forays in track and road races the world over, from its very first race win, which helped to build the company’s’ legendary status enjoyed today. After driving one, Ferrari is a car that is impossible not to lust after, being a product of deep-seated Italian passion. Enzo truly lives on in the cars that proudly bear his name.