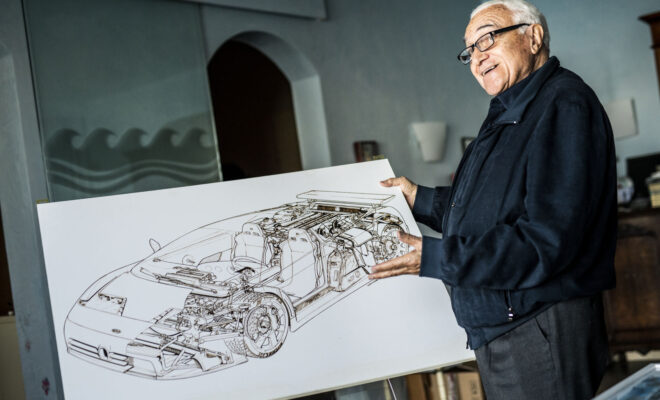 A combination of tenacity, dreams and boundless passion always prevails. No one knows this better than Romano Artioli. For decades, the Italian had dreamed of a modern super sports car – and this is what led him to revive the dormant Bugatti brand.

“Romano Artioli is a part of our brand’s history. It was thanks to his initiative and perseverance that Bugatti was revived,” explains Stephan Winkelmann, President of Bugatti. “Romano’s energy and enthusiasm, his irresistible passion for Bugatti, helped to transport the brand into the 21st century.”

Artioli’s love of cars is closely linked to his background. Born close to Mantua, the home town of racing driver Tazio Nuvolari, as a child he was fascinated by racing drivers and their cars. At the age of 12, he devoured a book on driver’s licenses. “After that, it was clear to me that my life would be dedicated to cars and engines,” he once told the magazine Classic Driver. Artioli studied mechanical engineering in Bolzano, and after the war he repaired cars.

When in 1952, at the age of 20, Artioli heard the news that production at Bugatti had ceased (at least for the time being), he was shocked. A brand of such superior quality, sophisticated design, ideas and technical achievement had to one day be revived. At that moment he vowed: “If no one reacts to the situation at Bugatti, I will work as long as it takes to one day bring the brand back”. It would take 39 years for him to achieve his ambition. Over the coming years, the Italian earned his living as a vehicle importer, including the brands GM and Suzuki. He became the largest importer of Japanese cars in Italy and the largest Ferrari dealer. His private car collection at that time featured numerous historic Bugatti models.

By the mid 1980s, the Italian had begun to negotiate the sale of the brand with the French government – discreetly and concealed from public view for two years. In 1987, he founded Bugatti Automobili S.p.A. and became its chairman. Artioli initially wanted to resurrect the company in Molsheim. “Molsheim is comparable to Maranello in Italy or Hethel in England. It is a Mecca for Bugatti, but at the time there were neither production halls nor engineers in the region,” says the 88-year-old. He asked fans of the brand to support him to create a link between Molsheim and a new location – Campogalliano.

In the years that followed, the world’s most modern car production plant was built with intensive planning on a site covering 240,000 square meters in the vicinity of Ferrari, Maserati, De Tomaso and Lamborghini. The site incorporates an administrative building, design studio, engine and test development area, production halls, test track, a stylish canteen, and exhibition space. The halls are open, bathed in natural light, and fitted with air conditioning systems so that the employees feel as though they are sitting in the open air. He handed the architectural commission to his cousin Giampaolo Benedini, who designed a spectacular building – one which went on to inspire other manufacturers.

Benedini also modified the initial design of the future super sports car, smoothing the sharp edges and the extreme wedge shape. “With the EB 110, we had to push the boundaries in terms of performance and quality. I owed that to Ettore Bugatti. Production output was less important than uncompromising quality and innovation,” explains Artioli, who today commutes between his office in Lyon and his family home in Trieste. The car enthusiast enlisted the region’s top engineers and designers to put his plan into action.

The EB 110 came into being on a blank sheet of paper, breaking with many of the conventions of its class and reaching the peak of automotive excellence. It was to become the best and fastest super sports car in the world. The EB 110 featured the first series-produced carbon chassis, all-wheel drive, four turbochargers, and a 3.5-liter V12 engine with five valves per cylinder and a power output of 550 PS. With a top speed of over 351 km/h, the two-seater broke multiple records. Almost 30 years ago, on Ettore Bugatti’s 110th birthday (September 15, 1991), Romano Artioli presented the EB 110 in Paris. Over 5,000 reporters and leading industry figures from all over the world, not to mention countless eager spectators, attended the premiere in Paris. Several hundred security personnel were needed to safeguard the event on the Place de la Défense. All of the fans shrieked as Alain Delon drove down the Champs-Élysées with Artioli’s wife Renata.

The most high-profile customer was Michael Schumacher, who had tested various super sports cars as part of a comparison test for a car magazine and had been particularly impressed by the EB 110, which he regarded as unrivaled. “Michael came to Campogalliano immediately after and purchased a yellow Super Sport with a blue GT interior. He did not ask for a discount – he was clearly a fan,” recalls Artioli. Every owner was able to individually configure their own EB 110, like a tailor-made suit.

However, times changed. While the response to the EB 110 had been extremely enthusiastic despite the global financial crisis, the Americans were suffering from the effects of the Gulf War, and the value of the yen was rising while in Italy the economy was collapsing – the market shrank and sales fell. Moreover, Artioli had invested in the automotive company Lotus and amassed debts; problems with suppliers followed.

After 39 years of dreaming and seven years of hard work, the Bugatti project under Romano Artioli came to an end. On September 23, 1995, after the construction of around 128 vehicles, he filed for bankruptcy. He paid his 220 employees up to the very last day. “The employees understood the spirit of Bugatti. They were what made the EB 110 so special, losing all that was a shock. It was a terrible day for all of us,” explains Artioli. The almost completed EB 112 super saloon could no longer be launched. “An incredible car, a delight to drive, with a 6.0-liter V12 installed behind the front axle. The chassis was made of carbon fiber and the internal suspension was lightweight. It drove like a go-kart,” recalls Artioli.

But the legend that is Bugatti did not rest for long. In 1998, Bugatti returned to the French town of Molsheim, to the place where, in 1909, Ettore Bugatti built his first car in his own name. Since then, the Atelier in Alsace has produced the inimitable hyper sports cars Chiron, Divo, Chiron Pur Sport and, in homage to the EB 110, the Centodieci