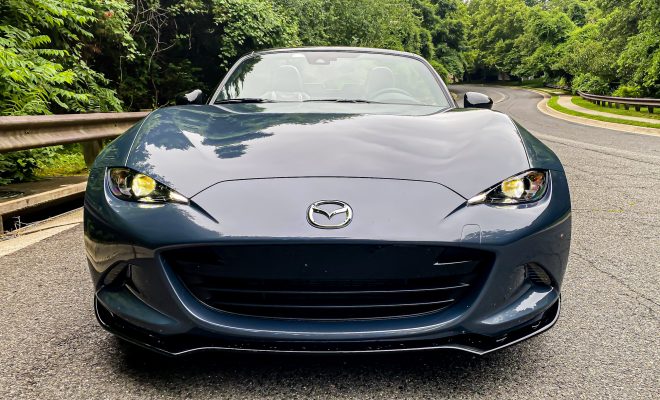 The 2022 Mazda MX-5 Miata Club comes with a manual transmission, unlike the outgoing one, which also came with an automatic transmission. While that may be the most notable change to this year’s Miata lineup, unsurprisingly, Mazda has moved up the auto tranny to the top-of-the-line Grand Touring. Unfortunately, we were not able to test drive the latter because ours was the Club, with a manual tranny.

Honestly, in our opinion, an auto tranny on a Miata is robbing the driver of the pleasure this little rocket has to offer. Besides that, Mazda has a new killer feature called Kinematic Posture Control, which helps to sharpen handling by slightly braking on the inner rear wheel when cornering. While Mazda claims it reduces body roll, our first impressions were that it felt strange initially, but we soon got used to it.

Our test unit was the Club, which comes with the Brembo BBS Recaro package, which includes Recaro Seats, Brembo brakes and BBS wheels. Suffice to say; this makes the Miata more fun to drive.

The 2022 MX-5 looks just as it did last year, which sold better than expected, according to Mazda. All MX-5 Miata models have a rear-wheel drive layout and come equipped with the Skyactiv-G 2.0-liter engine that delivers an inspiring 181 horsepower at 7,000 rpm and 151 lb-ft of torque at 4,000 rpm.

The exterior paint shade extends inside to the upper door panels, which helps to break up the uniform monochromatic theme. Some people may not like this approach, but the Miata is all about taking risks, and this is one we appreciate the automaker for taking.

The Miata fits like a suit; it’s cozy and can easily accommodate two adults. The Miata isn’t meant to be practical, so you get nothing more than the bare essentials.

The Miata further ignites the spirits of driving enthusiasts with enhancements to the roadster’s dynamics.

New for 2022, the Miata features wireless Apple CarPlay, which allows the driver or passenger to easily connect their enabled iPhone once they enter the MX-5 Miata and help them get on the road quicker. Including all standard Sport features, this model adds SiriusXM satellite radio with a three-month trial subscription and Bose 9-speaker premium audio that includes a subwoofer and headrest speakers for the driver and passenger seats to maintain the premium experience even with the top down.

Sure, there are a few storage cubbies but don’t expect the trunk to hold more than two small bags.

So, the Miata only wants you to take along the bare essentials. If you want more cargo space, the Subaru BRZ and Toyota’s GR 86 are probably better choices. But they don’t offer the driving pleasure and character the Mazda MX-5 delivers. Not to mention that the Miata is still sensibly priced.

The Mazda MX-5 continues to offer a rewarding drive; the stick shift works flawlessly and feels like an old glove. Most of all, the 2022 Mazda MX Miata Club continues to be affordable at a time when automakers seem to be raising prices to new heights. Sure, you don’t get all the bells and whistles as the competition with the Club, but at nearly $30k, it is one heck of a bargain, complete with excellent driving dynamics.