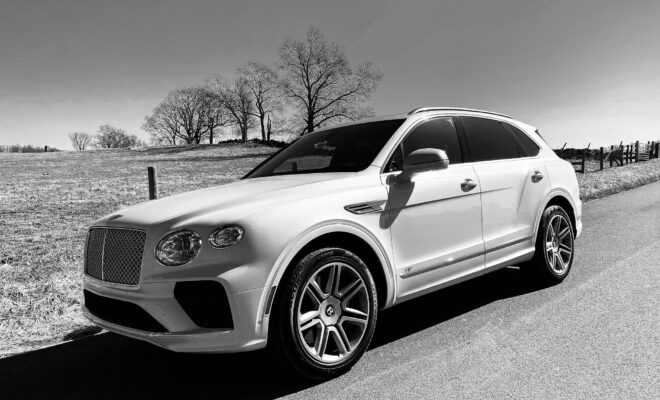 The 2021 Bentley Bentayga V8 isn’t just your average mid-cycle refresh of one of the best-selling luxury SUVs by Bentley. It is an overhaul of their design with every exterior panel apart from the doors and the roof. The infotainment system, vents and switchgear on the center of the dash are all new too.

While the spec sheet may suggest that the 2021 Bentley Bentayga V8 uses the same hardware as its predecessor, our test drive of the vehicle suggests otherwise. The Bentayga feels refined and more responsive than its predecessors, which we suspect was finely tuned based on user feedback.

The 2021 Bentley Bentayga V8 is an incredible machine, and we’re excited to tell you all about our experience. Spoiler alert: We liked it!

The newly redesigned 2021 Bentley Bentayga V8 gives it a more muscular look. The spec sheet shows that the wheels have been slightly pushed out by around 0.4-inch on each side. Plus, the clamshell tailgate with the widely spaced oval rear lights gives it a more refined look compared to its predecessor. In our view, the new design is broader, looks more imposing when you see it from the front and slightly more aggressive thanks to the wide grille, with headlights that have been pushed further into the corners. However, while the Bentayga does look wider, it’s an optical illusion because, again, a quick look at the spec sheet confirms that it isn’t wider than its predecessor.

The bumpers in the front and the back are 0.6-inch wider, though the hardpoints remain the same. The vehicle still has 68.6 inches height with the same 117.9-inches wheelbase. That’s why the Bentayga comes with standard 21-inch wheels, but you can always add 22-inches.

One of the things we instantly noticed about the 2021 Bentley Bentayga V8’s interior is that it is cleverly designed and visually impactful. It does all of this at a comparatively low price but isn’t cheap! The new 10.9-inch touchscreen is the same used in the Continental GT and the Flying Spur. The newly redesigned central vents and the new switchgear add to the beauty of the interior while occupying the same amount of real estate in the center.

Other notable changes include a brand new digital instrument panel, door trims and now more comfortably redesigned seats. If anything, the interior has a premium, more refined look to it, similar to the vehicle’s exterior. The car feels like you’re seated in a freshly built Georgian townhouse with brilliant modern furniture without the eccentric lighting.

Passengers in the back seat have a bit more knee room, and that’s because the seat in the back has been moved slightly more into the rear. The backrest is more upright, and now those seated in the back can control various functions via a touchscreen that’s very similar to what’s used in the Flying Spur. As expected, the unit supports Android Auto and Apple’s CarPlay.

The 2021 Bentley Bentayga V8 is a beast, as you’d expect. If there were one thing we could pick and rate as the best feature of the vehicle, we’d have to say driving pleasure. Driving comfort is certainly up there with the very best in the industry. Personally, we pushed the shifter on the center console into “manual” and used the paddle shifters to switch gears which made driving even more responsive and pleasurable. The eight-speed auto is highly responsive; you can quickly move through the gears at high speeds as we did, reduce speed around tight bends and then quickly upshift. It’s quick, easy and fun to drive.

While the drive isn’t as plush as, let’s say, the Range Rover, but it’s super quiet. In fact, there is so much squidge in 2021 Bentley Bentayga V8’s suspension that even more significant impacts aren’t easily felt. Turn on the active anti-roll system, and the Bentley will feel flat across any surface. Turning through tight corners is easy at high speeds. It takes some practice for someone who might not have driven a large Bentayga before, but a few minutes into it, you’ll never go back to anything else.

Sports mode on the Bentayga stiffens the suspension slightly. You will notice the occasional side-to-side pitch, but that’s a trade-off physically needed to ensure that the big body is kept on a controllable leash.

Compared to the pre-facelift, the 2021 Bentley Bentayga V8 is a lot quieter. The tires on our vehicle did an excellent job maintaining road grip on otherwise smooth roads at high speeds. Speaking of speeds, the Bentayga performs just as well on low speeds; to us, it feels better than a well-tweaked AMG SUV.

If we were to single out the one thing we didn’t like or liked comparatively less about the 2021 Bentley Bentayga V8 is the electric power steering. It’s light and direct, which is great for low-speed maneuverability, but on the highway, the feeling of the road may not be everyone’s cup of tea. In fact, we could feel the variable-ratio working, which to some people may not feel comfortable with, but for us, it means we know what’s going on the road, which can be important if you’re on a bad patch or are off-roading.

It is effortlessly fast, super quiet and handles like a dream. Those subtle yet equally noticeable refinements make the 2021 Bentley Bentayga V8 so much of an improvement that we’ll recommend upgrading. We walked away feeling that Bentley is headed in the right direction with it.