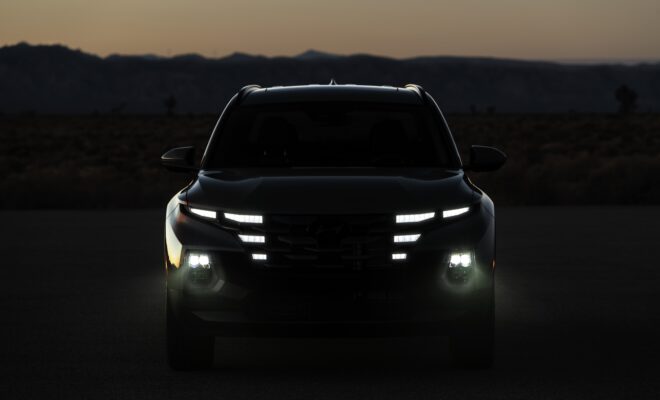 The 2022 Hyundai Santa Cruz Limited AWD is designed to be in a league of its own. Hyundai didn’t mean for Santa Cruz to compete against the Chevrolet Silverado, the Ford F-150, or the Honda Ridgeline. The target here is the so-called lifestyle crowd that wants functionality but in a small footprint yet enjoys driving a crossover rather than a truck.

After spending a week with the 2022 Hyundai Santa Cruz Limited, hauling kids around town, and running errands, here is what we’re excited to reveal about it.

The Santa Cruz stands out in an era where just about every pickup truck has that same 5-foot high hood line. The design of the Santa Cruz comes across as one that takes the best elements of a compact truck and mixes it in with the Tucson. However, the front is slightly bolder, with lightning built into the gaping grille.

Walk over to the rear, and you’re greeted by unmistakably chunky horizontal lights which accentuate its width, despite it not being wide. The door panels have more curvy lines than hardlines compared to Tucson. Overall this is an impressive look, a statement many people agree with, though your personal taste may vary.

Personally, we love that the Santa Cruz has a small footprint compared to conventional trucks. The bed may be shorter than the Ford Maverick’s, but the lower part is four inches longer than the 48.4 inch part on the top.

The truck is wide enough to carry 4×8 sheets of plywood for a weekend project easily. However, the killer app has been taken from the Ridgeline: which means that a small part of the floor bed will pop up to reveal a cargo hold. In addition, there are also covered storage cubbies on the bed wall.

If you like the interior of the Tuscon, then you’ll love the interior of the Santa Cruz, mainly because it has many similarities. The interior looks slick and glitzy, with a beautiful 10.3-inch screen and a digital gauge cluster. The infotainment and climate control buttons are touch-sensitive, which may quite frankly not be to everyone’s liking.

The built-in custom-fitted sound system sounds pretty good, while the interior’s sound deadening means that you’ll hear the most subtle highs and lows with minimum to no road noise.

The 2022 Hyundai Santa Cruz Limited AWD comes with a 2.5-liter turbo that quickly pushed 280 hp across all four wheels. The 8-speed dual-clutch auto sifts like a charm with no noticeable hiccups. While this is no sports car, the turbo packs enough highway grunt to pass most vehicles. The 0-60mph we tested was a pretty decent 6 seconds.

The 2022 Hyundai Santa Cruz Limited AWD is one of the best compact trucks you can buy, which is practical and comfortable to drive. It isn’t intended to be a full-blown truck, but instead a truck for those who may need it occasionally, or just in case they happen to undertake a home renovation project. Regardless, it is a solid performer, which is why we recommend it for anyone who wants a truck that drives like a crossover!