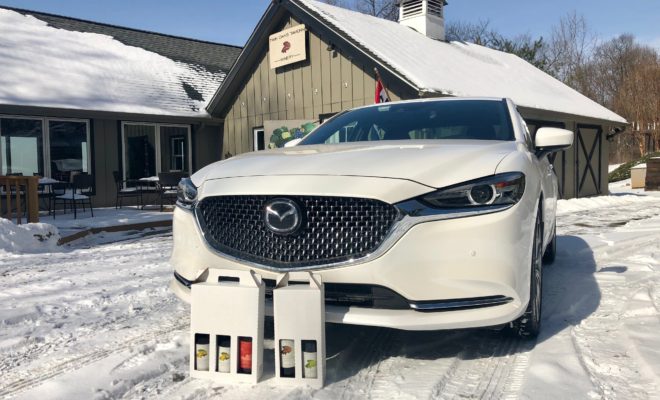 The 2018 Mazda6 Signature created a stir amongst stronger competitors in the midsize family sedan segment when it was launched. Even though the Mazda6 has always been nice it’s previous incarnations struggled against the BMWs, Benz, and Bentley in terms of niceness.

The 2018 model introduces the high-end Signature trim which debuted with the far more expensive CX9 and with it comes a great looking dash, luxury cabin and a couple of other noteworthy upgrades. But how does it really compare to the big boys? That’s exactly what we set out to answer in this review.

A Sexy Addition to Mazda’s Lineup

We have no doubt that many people reading this will concur that the 2018 Mazda6 is a great looking car. It is arguably the prettiest car in its class with the Honda Accord being a close second. That’s in addition to the fact that the company didn’t do much to change the styling in this facelift. The only visible changes being that horizontal grille slats being replaced with a mesh, the addition of 19-inch wheels with a few more spokes. That said the majority of changes to this model is under the hood.

Step inside the cabin, and you’ll swear it’s a more premium vehicle. For a car that’s slightly above $35K, the interior is way nicer than what we could ever have wished for, to say the least. The company has opted to use a lot of soft, high-quality leather. The use of real Japanese Sen wood is another addition we highly appreciate.

The door panels are laden with faux Alcantara, which makes the vehicle feel more upscale than any other car in this segment. The only thing we didn’t like about the interior is the infotainment screen, which looks like a dated Android tablet.

Space in the front and back is more than adequate for the average male measuring 6ft tall. Plus there is more than enough headroom so we can assure people that they won’t be bumping their head on the headliner.

The Mazda6 sports a 2.5-liter turbocharged four-cylinder engine producing 250 horses, putting it only second to the Accord Sport that produces 252 hp. However, where this engine shines is in the 310lb/ft of torque. Additionally, the six-speed auto transmission quickly slips into and out of gear without hesitation.

During our road test, we found that the suspension was tight with the steering being highly responsive. However, this isn’t a sports sedan and so the 0-60 in 7.2 seconds is pretty decent, but for some, it may not be sporty enough.

The 2018 Mazda6 Signature isn’t your average mid-sized sedan. It’s practical, smooth, luxurious, and costs less than the big boys in this segment. Not to mention the excellent all-weather tires that made driving this all the more pleasurable. The only drawback is perhaps the infotainment’s screen, which to us appears to be several years old. But that’s quickly replaced with a higher-end aftermarket option.